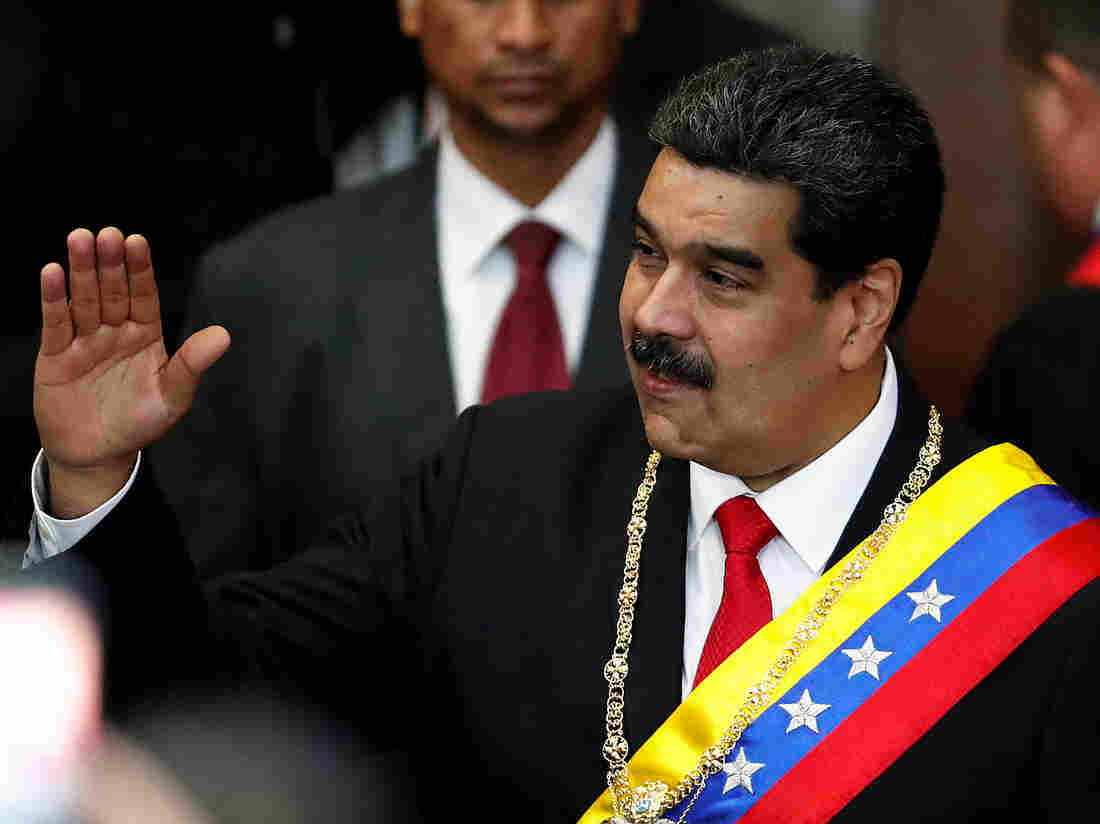 Venezuela’s sitting president, Nicolás Maduro, attends a ceremony Thursday in Caracas to mark the opening of the judicial year at the Supreme Court of Justice. Opposition leader Juan Guaidó has declared himself the interim president, but Maduro has not ceded power. Carlos Garcia Rawlins/Reuters hide caption 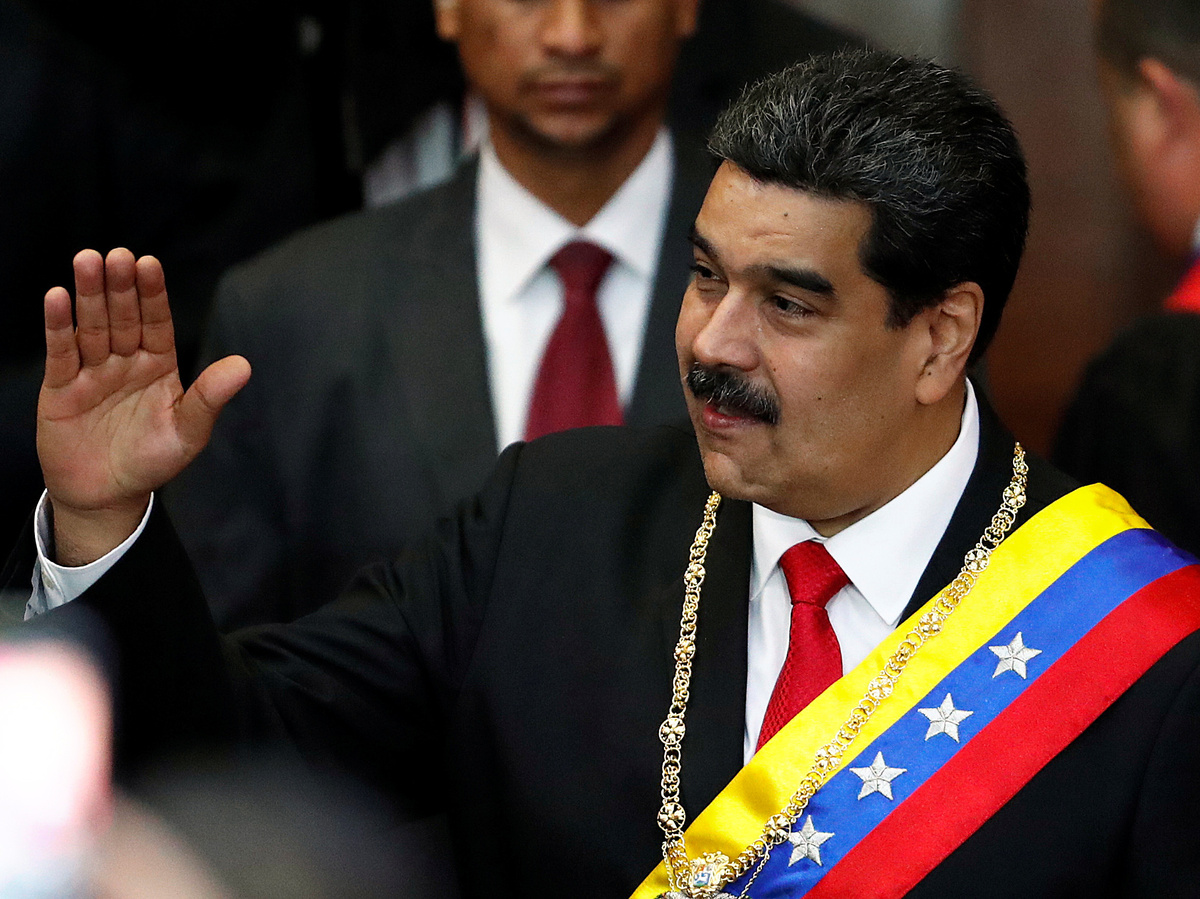 Venezuela’s sitting president, Nicolás Maduro, attends a ceremony Thursday in Caracas to mark the opening of the judicial year at the Supreme Court of Justice. Opposition leader Juan Guaidó has declared himself the interim president, but Maduro has not ceded power.

The day before, Guaidó took the oath of office in front of massive crowds that filled the streets of Caracas and declared himself interim president, pledging to hold general elections. The U.S. immediately declared its support for Guaidó, and has called on other nations to recognize him as the country’s leader.

Maduro has not ceded power. He tweeted that the country was facing “extreme imperial insolence” that “seeks to impose a puppet and servile government,” and told U.S. diplomatic personnel to leave within 72 hours. “Venezuela Is Respected! #YankeeGoHome,” he wrote.

Secretary of State Mike Pompeo announced that the U.S. will give Venezuela more than $20 million in humanitarian aid. Speaking Thursday at a special meeting at the Organization of American States in Washington, D.C., Pompeo said the funds are to help Venezuelans cope with severe food and medicine shortages, and other impacts of the country’s political and economic crisis.

On Wednesday, Maduro declared that he was breaking diplomatic ties with the Washington. But Pompeo said that as the U.S. considers does not consider the Maduro regime legitimate, “We therefore consider all of its declarations and actions illegitimate and invalid.”

Until recently, few Venezuelans even knew who Guaidó was — but now the 35-year-old is leading a high-stakes charge to end the Maduro regime. Pompeo affirmed U.S. support for Guaidó, and called on Venezuela’s security forces to ensure his safety. 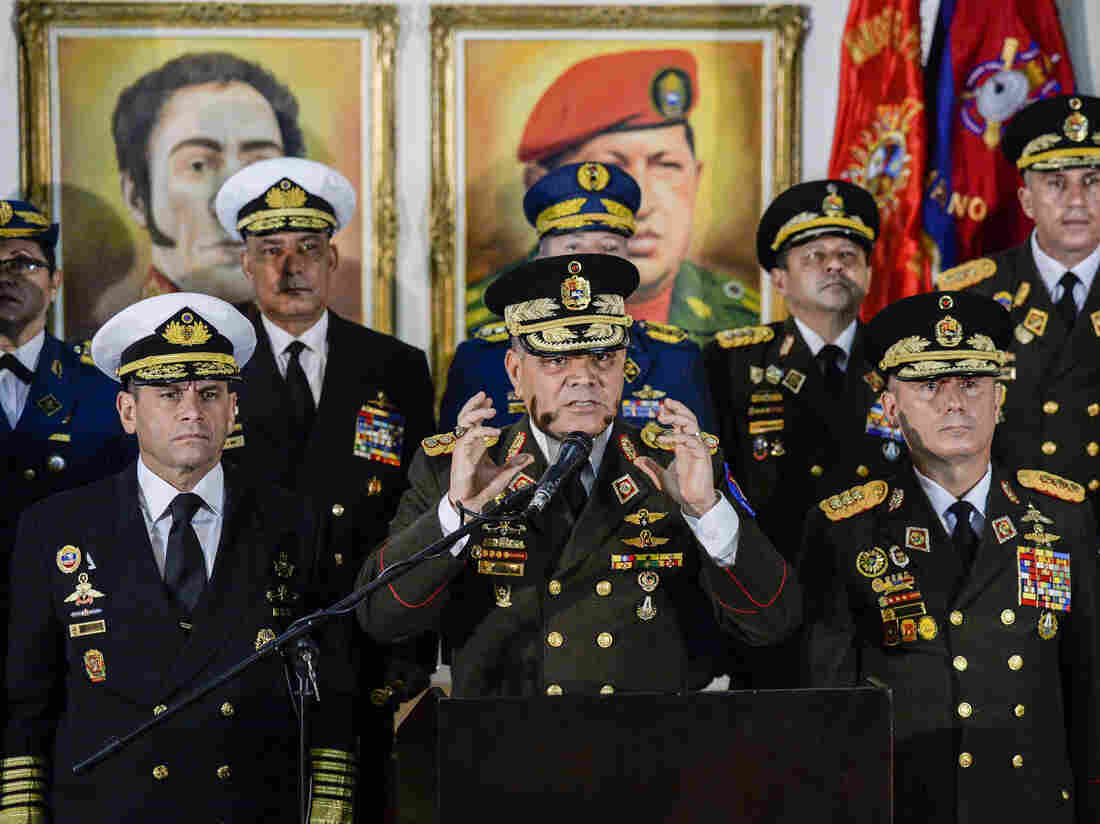 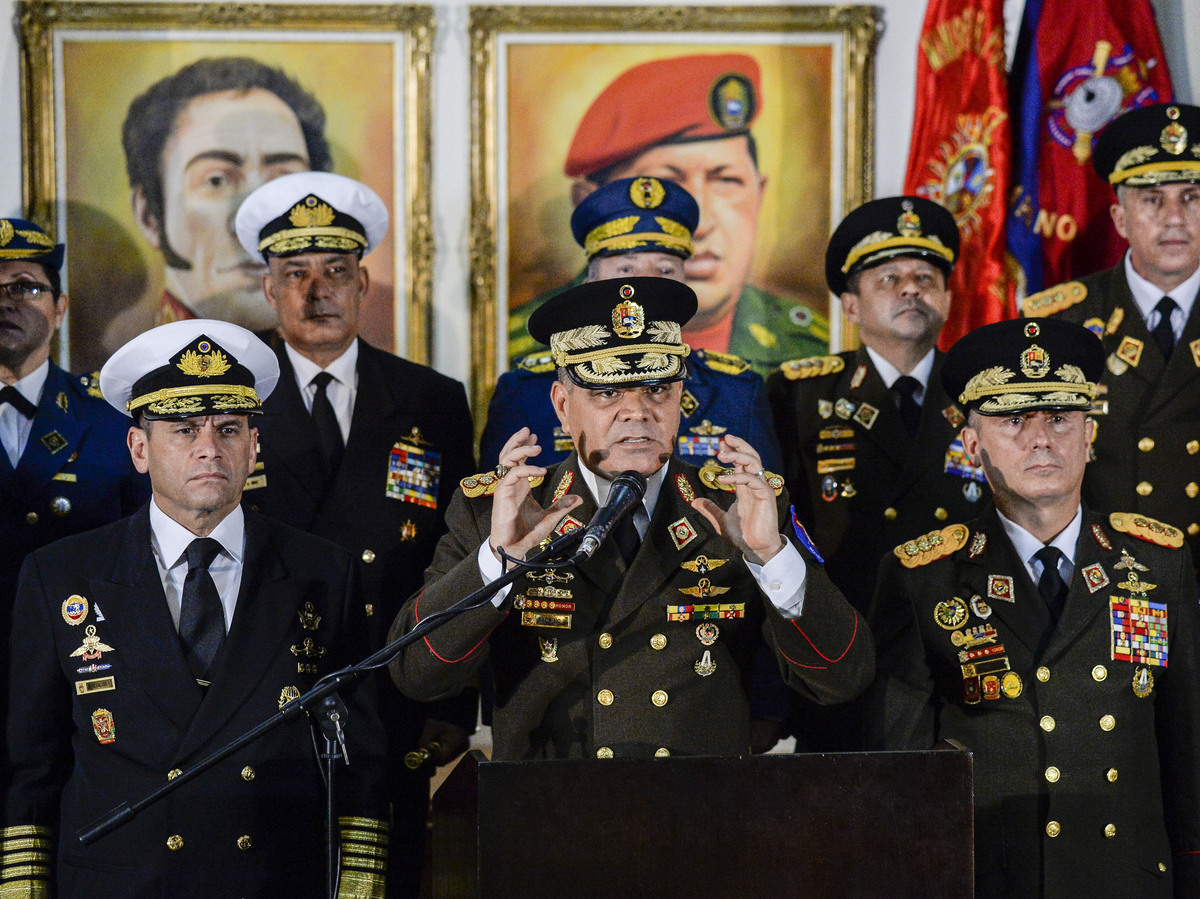 Maduro needs support of the army’s high command if he is to remain president – and so far it appears that he has it.

Venezuelan Defense Minister Vladimir Padrino López appeared on state-run television Thursday, surrounded by the military’s top brass, and called Maduro the “legitimate president.” He accused the opposition of waging a coup, Reuters reports, and said the U.S. and the other countries were carrying out an economic war against Venezuela.

In a televised address from the presidential palace on Wednesday, Maduro also accused Guaidó and Washington of staging a coup.

National security adviser John Bolton said Wednesday that the U.S. would not rule out military options but that its focus is on cutting off revenue to the Maduro regime and building recognition of Guaidó among governments in the Americas and Europe.

Maduro has been in office since 2013, and he was sworn in to a second term two weeks ago. That election was marred by reports of vote-rigging and coercion, and afterward the U.S., Canada and 12 other countries in the Americas rejected its legitimacy and downgraded diplomatic relations with Venezuela. The U.S. has imposed sanctions on Venezuela’s gold sector, as well as on former Venezuelan government officials.

Asked Wednesday why Maduro has been the subject of sanctions while authoritarian leaders elsewhere enjoy favor with the Trump administration, Bolton replied: “The fact is Venezuela is in our hemisphere, I think we have a special responsibility here, and I think the president feels very strongly about it.”

As the political crisis in Venezuela takes hold, nations around the world are choosing sides.

The South American countries of Argentina, Brazil, Chile, Colombia, Ecuador, Paraguay and Peru have all declared their support for Guaidó, the BBC reports. Canada also voiced support for the opposition leader.

Britain’s foreign secretary called Guaidó “the right person” to lead and said Maduro is not the country’s “legitimate” leader, but he stopped shy of recognizing Guaidó as president.

But Russia, which counts Venezuela as its closest ally in Latin America, has rallied behind Maduro. Russian President Vladimir Putin spoke by phone with Maduro, the Kremlin press service said Thursday, and “stressed that destructive outside interference grossly violated the fundamental norms of international law.”

Russian Prime Minister Dmitry Medvedev suggested consideration of what Americans would do if the tables were turned. “Just imagine for a moment how the American people would react to the news the budget crisis (shutdown) has produced a situation in which, say, the speaker of the House of Representatives has declared himself a new president,” Medvedev wrote on Facebook, according to Russian news service TASS. “And how would the existing US president react?”

Mexico, which itself has a new president, released a statement of “non-intervention” — which essentially means support for the Maduro regime. And Cuba’s foreign ministry said it was backing Maduro against a “coup d’état” to impose “a servile government under orders from the United States,” according to The Associated Press.

Turkish President Recep Tayyip Erdogan said he was shocked at the Trump administration’s move to back Guaidó, and reiterated his support of Maduro, the news service reports.

At least 16 people have died in the recent protests, according to the Venezuelan Observatory of Social Conflict.

More than 3 million Venezuelans have fled the country to escape shortages and hyperinflation. Most have gone to Colombia, Ecuador, Peru and Brazil.

Oil prices rose on Thursday, following U.S. signals that it may sanction Venezuela, a member of OPEC.