At the time of writing, no African side has ever reached a FIFA World Cup semi-final – a fact which seems all the more remarkable when you consider some of the talent which has been produced by that continent – George Weah, Didier Drogba and Yaya Touré, to name but three.

Ironically, Ghana, the side which came closest to breaking that unenviable record in South Africa in 2010, had few genuine stars, and their only recognised world-class player, Michael Essien, was ruled out of the tournament through injury.

Nevertheless, had it not been for a combination of desperate cynicism by Luis Suárez and uncharacteristically poor penalty taking by Asamoah Gyan, the Black Stars would have advanced into the last four at Uruguay’s expense. That’s how close they came to winning a bad-tempered and thoroughly engrossing quarter final at Soccer City, Johannesburg.

In previous World Cups, African sides – not least Cameroon and Nigeria – had been notable for a combination of attacking flair and defensive naivety. In contrast, under Serbian coach Milovan Rajevac, Ghana weren’t the most thrilling side to watch, but they were highly disciplined and efficient, conceding just three goals in four matches on their way to their showdown with Uruguay.

Meanwhile, La Celeste had scored six goals – including three from Suárez – and conceded just one in their impressive run to the quarter final, which had seen them eliminate France, hosts South Africa and South Korea.

Few observers would have fancied the Black Stars’ chances against the South Americans – and for most of the first half hour, there was little reason for them to change their minds. But for two superb saves by Richard Kingson, Uruguay would have enjoyed a commanding early lead. 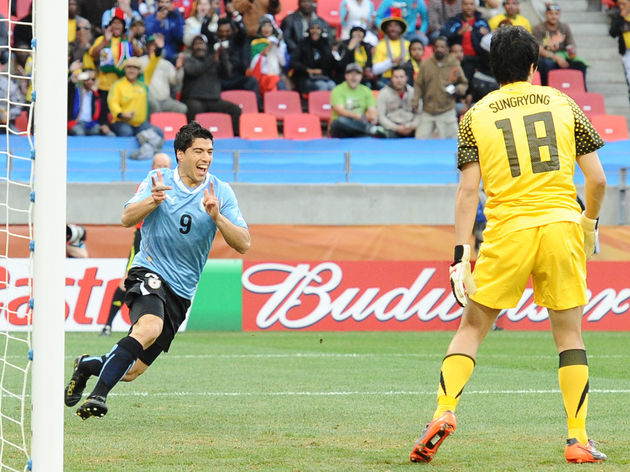 Then Rajevac’s charges finally began to offer an attacking threat – Isaac Vorsah headed narrowly wide from a corner, while both Gyan and Sulley Muntari missed presentable chances. Yet it still came as a monumental shock when Muntari let fly from 40 yards, beating a stunned Fernando Muslera to give Ghana the lead in the second minute of first half injury time.

Muntari had only even started because André Ayew was suspended. In fact, the Inter midfielder had made no secret of his frustration with what had been a bit-part role until now, and he’d only narrowly avoided being sent home by his manager.

How Uruguay must have wished Rajevac had lost his patience with Muntari. To compound their misery, they had to play the rest of the match without captain Diego Lugano, who picked up an injury towards the end of the first half. This meant that they had to do without either of their first choice centre backs, as Diego Godin had already been ruled out with injury. 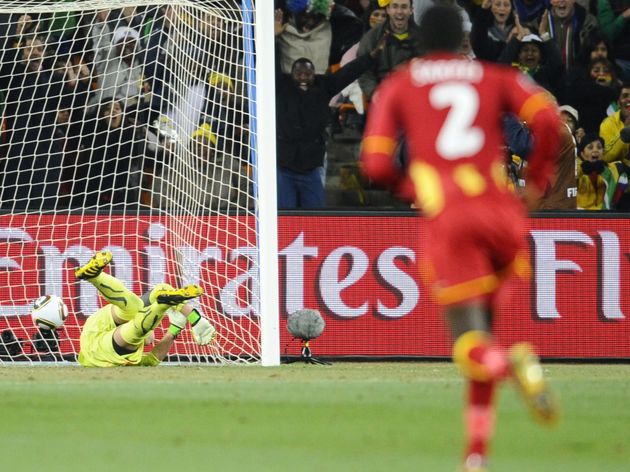 Yet their dejection was short lived, as Diego Forlán scored a quite brilliant equaliser early in the second half, curling in an unstoppable free kick from a wide angle in the 55th minute. Later in the match, his strike partner Suárez had two fine opportunities to give Uruguay the lead, but could only find the side netting with one shot and Kingson’s palms with the other.

At the other end, the Black Stars wasted several excellent opportunities on the counterattack. For all their industry, they didn’t quite have the vision to pick the right pass, while Gyan was frustrated by Uruguay’s dogged defending.

So the match headed into extra time – and as the South Americans faded, the Africans seemed to grow stronger. Gyan had a shot blocked by Andres Scotti, who nearly scored an own goal towards the end of extra time, and Kevin Prince-Boateng headed inches wide from a long throw.

Ultimately, in the dying seconds of the match, Ghana’s pressure told. Uruguay failed to clear a dangerous free kick, and immediately after legitimately blocking Steven Appiah’s goal-bound effort on the line, Suárez denied Dominic Adiyiah with a blatant handball.

The Uruguay striker was rightly sent off, and it looked to all the world as if Gyan would bury his third penalty and fourth goal of the tournament with the last kick of the match…

Only he didn’t. He hit the crossbar. In an instant, Suárez’s disposition was transformed from abject despair to utter jubilation. His instinctive moment of win-at-all-costs cynicism had saved his side.

To his enormous credit, Gyan stepped up to take his side’s first spot kick of the shootout, which he fired home emphatically. Unfortunately for Ghana, neither Adiyiah nor John Mensah could emulate him – Muslera saved both their penalties, thus rendering Maxi Pereira’s miss irrelevant. Óscar Tabárez’s side marched on, leaving Ghana to ponder what might have been.

If Ghana had lost to a spectacular goal or been denied by a fantastic save, their defeat would likely have been easier to swallow. Instead, they were thwarted by a shameless infringement of both the letter and the spirit of the laws of the game.

Rajevac understandably described it as an ‘injustice’, and Suárez was widely reviled as a result – though obviously not in Uruguay, where he was hailed as a hero.

Suárez himself was unrepentant about his handball, which he described as ‘the save of the tournament’ and likened to Diego Maradona’s infamous ‘Hand of God’ goal against England in 1986.

Still, it must have been some consolation to Ghana that Suárez’s handball ultimately proved costly for Uruguay, as he was suspended for the semi final. Deprived of arguably their most talented player, La Celeste succumbed 3-2 to the Netherlands.