When England were drawn with Argentina, Sweden and Nigeria in Group F for the 2002 FIFA World Cup in Japan and South Korea, it was immediately dubbed the ‘Group of Death’.

Favourites Argentina had qualified with considerable ease, while Sweden had won their qualifying group without losing a match. Oh, and England hadn’t beaten the Swedes for more than 30 years.

Nigeria also had an impressive World Cup pedigree, having reached the knockout stages in the previous two tournaments. 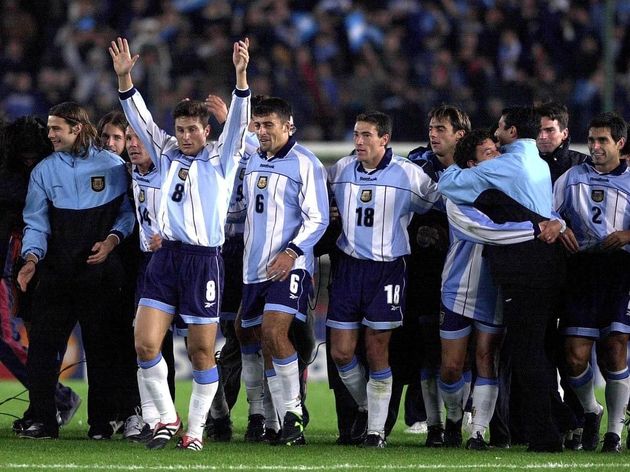 Whatever happened in Group F, two strong sides were going to crash out in the first round. No one would have expected Argentina to be one of them.

When the Three Lions Were Dark Horses

England’s inconsistency under Sven-Goran Eriksson was epitomised by their last three qualifiers. After thrashing Germany 5-1 courtesy of a Michael Owen hat trick in Berlin, the Three Lions struggled to beat Albania before snatching a thoroughly undeserved 2-2 draw against Greece at Old Trafford, thanks to a last-gasp free kick from captain and midfield talisman David Beckham.

When he broke a metatarsal bone in his foot in April, England’s chances of surviving the Group of Death suddenly seemed very slim. They became even slimmer when right back Gary Neville and midfielder Steven Gerrard were both ruled out with injury.

In the end, Beckham did return in time, albeit some way short of full fitness.

Argentina Make an Ominous Start, While England Labour Against the Swedes

The first two matches in the group didn’t bode well for England’s chances.

Argentina outplayed Nigeria in Ibaraki, with the 1-0 scoreline being a testament to the profligacy of goalscorer Gabriel Batistuta and the brilliance of Nigerian goalkeeper Ike Shorunmu. Nevertheless, Jay-Jay Okocha reminded the world of his prodigious talent, firing in a stunning strike which Argentina goalkeeper Pablo Cavallero did well to save.

Neither side would have been afraid of England after watching the Three Lions’ 1-1 draw with Sweden in Saitama. After a first half dominated by Eriksson’s side, in which Sol Campbell headed England in front, Niclas Alexandersson scored a deserved equaliser shortly before the hour mark, after a woeful back pass from Danny Mills had landed England in trouble.

From then on, Sweden looked the likelier winners, and only a succession of fine saves from David Seaman denied them victory.

Nigeria were the first casualties of the Group of Death after their 2-1 defeat against Sweden in Kobe.

The Super Eagles opened the scoring against the run of play, but two strikes from Henrik Larsson were enough to sink them. First, the Celtic striker showed superb control to convert Arsenal midfielder Freddie Ljungberg’s immaculate through ball. Then, not long after the hour mark, he scored from the penalty spot after being cynically fouled.

Sweden’s victory meant that England knew they couldn’t afford to lose to Argentina in Sapporo, while their opponents knew they’d progress with a win. Neither side gave the other any quarter – and both were fortunate to finish the match with all eleven players still on the pitch.

This was hardly surprising for such bitter rivals. What was surprising was that England showed greater flair and cohesion than their opponents. They even came desperately close to taking an early lead when Michael Owen hit the post.

Meanwhile, Juan Sebastián Verón – who had impressed against Nigeria – was neutralised by England’s midfield, three of whom – Beckham, Paul Scholes and Nicky Butt – were his Manchester United teammates. The Argentina captain was so ineffectual that he was replaced at half time.

His England counterpart had a far more satisfying match, scoring the only goal of the game just before half time. Despite Diego Simeone’s attempts to distract him, Beckham blasted home a penalty after Owen had gone down under Mauricio Pochettino’s clumsy challenge.

The Three Lions could even have won by more, with both Owen and Beckham missing presentable chances and Scholes and Teddy Sheringham forcing smart saves. Sheringham’s volley was the culmination of a sublime passing move which emphasised England’s superiority.

Admittedly, the last twenty minutes of the match were dominated by Argentina. Yet they produced few clear chances – and when they did, Seaman produced two world class saves. England held on for a deserved victory – and Beckham earned sweet revenge for his controversial dismissal against the same opponents in 1998.

Sweden Win the Group, the Favourites Flop & England Play out a Bore Draw

After the Argentina game, the Three Lions’ final group match against Nigeria in Osaka was something of a damp squib.

There was one bright moment for England, when a fantastic long-range effort from Scholes drew an even better save from Shorunmu. Other than that, the Three Lions looked sluggish in the afternoon heat. Not that it mattered – they only needed a point to ensure their progress.

The same couldn’t be said of Argentina, who needed to defeat Sweden in Miyagi. Despite wave after wave of attacks, La Albiceleste couldn’t force a way past the stubborn Swedes in the first half. Then, in the second period, disaster struck for the favourites when Anders Svensson curled in a sumptuous free kick.

A late equaliser from Hernán Crespo was too little, too late to save Argentina from the humiliation of their worst World Cup performance since failing to qualify for the 1970 tournament, while Sweden won the group by virtue of scoring two more goals than England.

So England somehow survived the Group of Death, despite being just as inconsistent as they’d been in qualifying. Their inconsistency continued into the knockout stages, as they swept Denmark aside before slumping to defeat against Brazil.

Meanwhile, Sweden were eliminated in the round of 16, courtesy of a golden goal from Senegal, one of the tournament’s surprise packages.

It would take England another ten years to earn their first win over Sweden in a competitive match – a 3-2 victory in the 2012 European Championships.