England were supposed to win the World Cup in 2006. It really is that simple.

Sven Goran Eriksson’s team had cruised through qualifying without breaking a sweat – only an away draw in Austria on matchday one and a freak defeat by Northern Ireland later on in the process detracted from an otherwise 100% record built on solid foundations.

At that time, the Three Lions had been in a good place to do well internationally for a number of years. The 2002 World Cup was a big ‘what if’ for England. Beckham was still recovering from a broken metatarsal suffered just weeks earlier, while a rapidly emerging Gerrard missed the tournament completely, as did usual starting right back Gary Neville.

England beat Argentina in a famous grudge match thanks to a Beckham penalty, but with a fully fit and full strength squad they might have won the group instead of picking up draws against Sweden and Nigeria to finish second.

As it was, even losing a quarter final against eventual champions Brazil could have been different, especially after Owen gave England a first half lead. Struggling for fitness, the usually incredibly committed Beckham jumped out of a challenge in the build up to Brazil’s equaliser, while Ronaldinho’s winner came from a set piece. Whether he meant to lob David Seaman or not – he always claims he did – it was a freak goal.

Two years later at Euro 2004, it was more heartbreak after what felt like another near miss for England. A late collapse saw France steal a 2-1 opening win in the group stage after a fine English performance and a missed penalty from Beckham, while there was little trouble in seeing off both Switzerland and Croatia in the remaining group games to progress.

In those two games, Wayne Rooney emerged as England’s new superstar. The 18-year-old looked unplayable and his loss to injury early in the quarter final against Portugal, when England were winning, killed the team’s buoyancy. Portugal equalised in the dying stages, before both teams scored in extra-time and a penalty shootout that was only ever going to end one way.

40 years on from Bobby Moore lifting the Jules Rimet trophy at Wembley, 2006 had to be when England’s crushing silverware drought at long last came to an end. It just had to.

The timing was excellent. The World Cup was back in Europe, more specifically Germany, after being played in the heat and humidity of east Asia four year previously. Gerrard was back, Neville was back, Beckham was fully fit, Rooney was two years older and wiser – or so it seemed – while the rest of the squad was in a rare perfect state of having lots of experience without being old.

The only problem was that Rooney, like Beckham in 2002, was nursing a metatarsal injury that he’d cruelly suffered less than six weeks before England’s opening game. And, just as in 2004, Rooney’s injury badly hurt England again.

With Rooney left out, a single own goal in the third minute from Paraguay’s Carlos Gamarra was enough for victory in the opening game. The young talisman eventually appeared from the bench in the second game against Caribbean newcomers Trinidad & Tobago, but England were sluggish and only late goals from Peter Crouch and Gerrard spared embarrassment.

Rooney then started the final game against Sweden, lasting only 69 minutes. Owen was also stretchered off just moments after kickoff after damaging knee ligaments – that moment was arguably the beginning of the end for Owen as he was never the same again. England drew the game 2-2 after twice giving up the lead. Despite looking so laboured over the course of their three fixtures, England had finished top of Group B and progressed to the knockout rounds.

Ecuador were the opposition in the last 16, the first game in which Rooney was able to complete 90 minutes. A free kick from Beckham provided the only goal and the Three Lions held on for the win, although the reviews were hardly glowing. “England’s win over Ecuador yesterday was more of an apologetic cough than a battle cry for confrontation,” Kevin McCarra wrote for the Guardian. 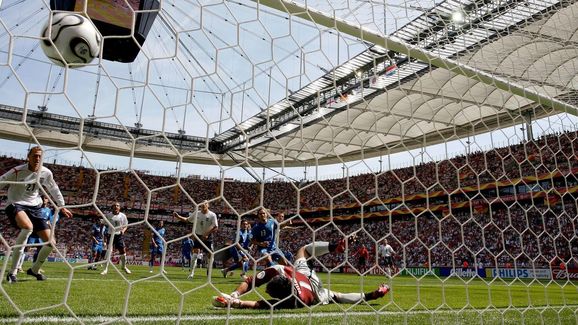 At least England were through. There was even room for optimism as Rooney had started to show flashes of his best deep into the second half against the South Americans. And with Portugal, who were to be without suspended midfielders Deco and Costinha after red cards in their last 16 win, to follow there was also a chance for the perfect revenge after Euro 2004.

Unfortunately for England, Beckham had to be withdrawn due to an ankle injury shortly after half-time, and then came the flashpoint that has come to define the 2006 World Cup from an English perspective. After a frustrating hour and a frustrating tournament, Rooney snapped.

Fighting for the ball with Ricardo Carvalho, who had fallen to the floor in the contest, the 20-year-old stamped on his opponent. The Portugal defender writhed in pain, prompting his teammates to come rushing in to petition to referee Horacio Elizondo, under whose nose the whole thing had just happened.

Among the Portuguese players was Cristiano Ronaldo, Rooney’s friend and Manchester United colleague. As Ronaldo pleaded with Elizondo, presumably to take strong action, Rooney took exception and pushed his club mate away. After calming the situation, the referee reached for his back pocket and produced a red card. From there, England were up against it, but managed to hold on for the final half hour of the 90 minutes and through extra-time. However, another penalty shootout meant another Portugal win and another painful exit.

What later became apparent is that as Rooney trudged off, Ronaldo looked over to the sideline and directed a clear wink towards the Portuguese bench. To say there was outrage among England fans is an understatement. Upon seeing the footage, seething BBC pundit Alan Shearer urged Rooney to ‘put one on Ronaldo’  when they met at pre-season back at club level.

“Did the Portuguese try to wind Wayne up? Maybe. Did they get him sent off? It’s a fact,” former FA director David Davies later proclaimed during on BBC3.

Ronaldo wasn’t a popular figure in England anyway, a perceived show pony with a reputation for diving, and a Manchester United player on top of it all. After so many years of hurt, English fans love a scapegoat on which to pin their heartbreak – it was infamously Beckham in 1998 – and Ronaldo and underhand Portuguese tactics had become just that for 2006.

Rooney was naive and immature, but England had of course been cheated. Portugal and Ronaldo was the reason the Golden Generation were out of the World Cup. It had nothing to do with the fact that England had been struggling throughout the tournament, that they lacked ideas and ingenuity against a Portuguese side far from their best in the opening hour of the quarter final, that referee Elizondo would have brandished a red card regardless of Ronaldo’s interference, or that England had dreadfully scored only one of their four penalties in the shootout that followed. What about the distractions of the ridiculous WAG circus?

“The bottom line is that if Wayne Rooney had not stamped on Ricardo Carvalho’s vitals and seen red, there would be no room for discussion,” BBC journalist Phil McNulty accurately summarised.

Ultimately, England only had themselves to blame. It wasn’t only about Rooney and a single flashpoint in one minute of one game. The Golden Generation had badly underperformed over several games and it put too much pressure on an individual who wasn’t able to cope with it.

Perhaps because England were in such a strong position before the World Cup in 2006, the need for a scapegoat to justify the failings at yet another international competition was felt even more.