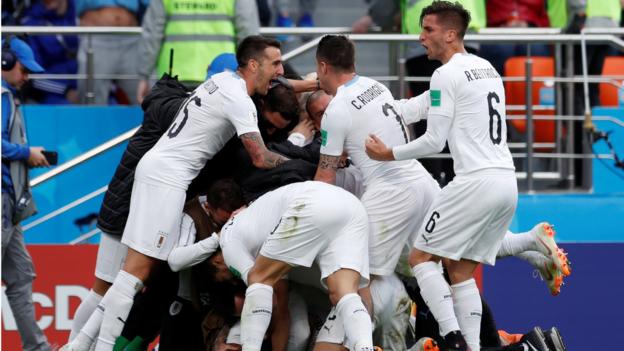 Uruguay snatched a late winner as they began their World Cup campaign with a dramatic victory over Egypt, who left Mohamed Salah on the bench.

Jose Gimenez headed powerfully into the net in the 90th minute as he met Carlos Sanchez’s free-kick to give the South Americans a winning start in Russia.

Uruguay had been the better side as Luis Suarez had missed four chances and Edinson Cavani had hit the inside of a post with a 25-yard free-kick.

Salah, who scored 44 times for Liverpool this season, remained an unused substitute as he continues to recover from a shoulder injury sustained in last month’s Champions League final.

Without Salah, Egypt lacked a cutting edge and had looked on course to earn a point in their first match at a World Cup finals since 1990 before Gimenez’s late goal.

The result means Russia are top of Group A after their 5-0 victory over Saudi Arabia in the tournament’s opening game on Thursday.

Suarez off form but Uruguay win it

It had looked like being a frustrating afternoon for two-time World Cup winners Uruguay, with Barcelona forward Suarez surprisingly off form.

He was making his 99th international appearance and was playing in a World Cup finals game for the first time since being banned from all football related activity for four months for biting Italy defender Giorgio Chiellini during Brazil 2014.

But at the Ekaterinburg Arena Suarez proved wasteful.

He shot off target early on, scuffed a shot wide when unmarked only six yards out and was then twice denied by Egypt goalkeeper Mohamed El-Shenawy – who saved one shot with his legs and then stopped Suarez from taking the ball around him.

Uruguay finished the match strongly with El-Shenawy making a fantastic one-handed save to push away Cavani’s well-struck effort from the edge of the penalty area late on.

Cavani later hit the post with a fine 25-yard free-kick before El-Shenawy was beaten in the 90th minute.