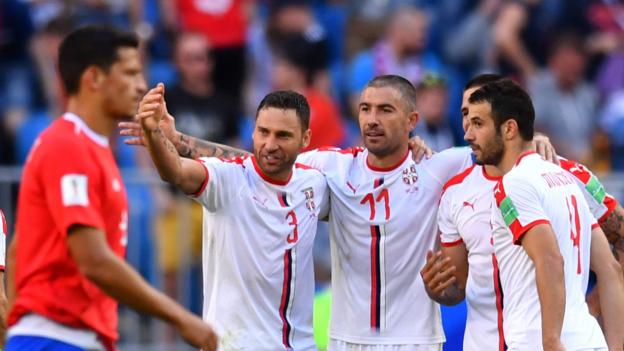 Aleksandar Kolarov scored a spectacular free-kick to give Serbia a deserved victory in their opening World Cup Group E match against Costa Rica.

Serbia captain Kolarov – the former Manchester City defender – scored from 25 yards when he curled the ball over the Costa Rica wall.

Kolarov’s effort had sufficient bend to find the top corner with Real Madrid goalkeeper Keylor Navas clutching at thin air as he desperately scrambled across goal.

Costa Rica only sporadically threatened the Serbia goal, with an early header over the crossbar from unmarked defender Giancarlo Gonzalez their best effort.

With games against Brazil and Switzerland to come, this was a key match for both nations to press their credentials to reach the knockout stages.

Mladen Krstajic’s Serbia side – the lowest ranked European nation at Russia 2018 – now appear the best placed of the two to progress after a dominant second-half display.

The margin of victory would have been greater had Navas not narrowed the angle to deny Newcastle striker Aleksandar Mitrovic after he had been sent clear by the impressive Sergej Milinkovic-Savic earlier in the game.

Serbia’s Nemanja Matic, meanwhile, was involved in an ugly confrontation with a member of the Costa Rica coaching staff in injury time as the Manchester United midfielder tried to retrieve the ball after it went out of play.

Before this encounter Serbia had managed one victory in their last six World Cup tournament matches, and lost both of their opening World Cup group games as an independent nation following the break up of Yugoslavia.

Optimism in the Balkan state heading into this tournament was not particularly high.

Indeed the country’s football association cancelled an open-top bus parade in Belgrade as part of a send-off to the tournament because they predicted such a lukewarm reaction.

After a cautious start in this match there are some encouraging signs that Krstajic’s blend of a gnarled experienced defence combined with a youthful technically-gifted midfield could make an impression.

“There are no clans or cliques in this squad for the first time in a long time,” Krstajic said. “The basics of success are a good atmosphere in a team.”

The creative talents of Milinkovic-Savic were particularly eye-catching and there is the sense that he must follow this impressive showing against stronger opposition.

A sterner test of Serbia’s capabilities will come in their remaining Group E games with Brazil and Switzerland but after a low-key build-up, this was an encouraging display.

Costa Rica were one of the surprise packages of the 2014 World Cup as they topped a group which included former winners England, Italy and Uruguay en route to the quarter-finals.

That side became synonymous with a fearless approach against more illustrious opponents.

Many of their squad were at the peak of their careers during that tournament, but the Ticos have the second-oldest squad at this year’s tournament.

Their starting line-up in this match had an average age of 29 years 346 days. Francisco Calvo, at 25, was their youngest player.

Against Serbia, the Ticos looked like a side whose best days were behind them.

Costa Rica coach Oscar Ramirez made good on a promise to shave his head if they qualified for this tournament.

However, it appears unlikely they will get out of the group stages now they are here in Russia.

‘This isn’t over yet’ – what they said

Costa Rica coach Oscar Ramirez: “We play against the second and sixth-placed teams in the Fifa rankings.

“It’s going to be difficult, but I just told my team: ‘This isn’t over.’

“We should’ve capitalised on our opportunities like they did. We had our tactical plan in place and with the subs, we tried to attack them on the wings. We tried to execute our plan but they managed to score on a set-piece. What can you do?”

Serbia coach Mladen Krstajic: “My players had the right attitude and approach: unity. We had to be a compact unit in both defence and attack and that’s most important.

“What’s most important for me is that we played as a team and we were focused. We have to be planted firmly on the ground and continue as a team.

“I’m a person who likes to take responsibility and even if we had lost, I would’ve come here to analyse the match to the best of my abilities. I’m very happy and proud of my players for their team effort.”

Costa Rica face Brazil in St Petersburg in a 13:00 BST kick-off on Friday 22 June, while on the same day Serbia meet Switzerland in Kaliningrad at 19:00.