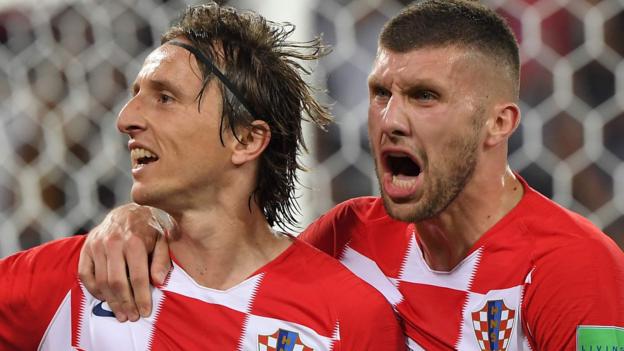 Croatia made a winning World Cup start against Nigeria, as Oghenekaro Etebo’s own goal and a Luka Modric penalty decided a poor Group D match in Kaliningrad.

Etebo, who joined Stoke City from Portuguese club Feirense for £6.35m on Monday, turned Modric’s first-half corner into his own net after Ante Rebic and Mario Mandzukic had both got touches.

Modric then converted a 71st-minute penalty – Croatia’s first shot on target – after William Troost-Ekong had manhandled Mandzukic at a corner.

Modric and Rakitic let down by off-form forwards

At 33, Modric is facing what could well be his final World Cup – along with striker Mandzukic, who is 32, and midfielder Ivan Rakitic, who turned 30 in March.

The Croatia captain won the Champions League for the fourth time in five seasons with Real Madrid in May, but his run up to Russia has hardly been smooth.

He has become unpopular in his homeland over a saga that has seen him charged with perjury – an offence that carries the threat of jail – for retracting his testimony in the tax fraud trial of a senior Croatian football official.

On the pitch, though, he has managed to put that to one side, and provided the class that guided Croatia to an unconvincing victory.

Both he and Rakitic were excellent in their passing, although the lack of movement among the forwards in front of them often thwarted their ambition.

When Croatia did create chances, it was usually their two creative midfielders who were involved. Modric’s fine early cross was guided down by Ivan Perisic for Mandzukic to fire over, while Andrej Kramaric’s header looped just over the crossbar from a Rakitic assist after half-time.

Rebic, who scored twice as Eintracht Frankfurt beat Bayern Munich to win the German Cup in May, later volleyed a great chance wide from six yards after Rakitic’s sublime pass had freed Perisic on the left.

Modric and Rakitic certainly have the ability to unlock the world’s best defences – but they will need help from those in front of them when they face better teams than Nigeria.

Nigeria fail to look the part

Nigeria’s striking new home kit, dominated by bright green and white chevrons, proved very popular when it went on sale last month – so it was disappointing to see them in their muted away strip for their opening World Cup match.

By and large, Gernot Rohr’s inexperienced team were every bit as subdued as their shirts. Rohr’s side impressed in qualifying, finishing top of a group that included Cameroon and Algeria – but the German coach has travelled to Russia with a squad containing 18 World Cup finals debutants, and the players selected struggled on the big stage.

Etebo, despite his own goal, was one of their better performers, producing an excellent second-half pass out to the right that Victor Moses gathered and rolled wide of the near post after cutting inside.

Moses was a threat when delivering set-pieces, although his tendency to go to ground easily when challenged did him little credit.

Ighalo, on his 29th birthday, was isolated as a lone striker – his header from Idowu’s cross, in the 59th minute, was the first of just two efforts on target by the Super Eagles, although new Brighton signing Leon Balogun went close to heading in from a Moses corner at the start of the second half.

Arsenal forward Iwobi failed to make a significant impact, and Leicester’s Kelechi Iheanacho was unable to inspire a comeback when appearing as a substitute – leaving Rohr to fathom just where his team’s goals are going to come from.

Croatia 2-0 Nigeria: How you rated the players

‘We were naive on set-pieces’ – reaction

Nigeria coach Gernot Rohr: “We are disappointed. When you lose a match, it’s not a good thing, but we must recognise that Croatia had the better team tonight, and my young players made some mistakes, especially on the corners.

“Sometimes we were a little naive on the set-pieces, but we will work on it. We have to accept this defeat and now we have to win against Iceland. If we win the next game, then all is possible for qualification.”

Croatia coach Zlatko Dalic: “A win is a win is a win. It doesn’t matter how you score. What matters is that you score. We want to be more efficient going forward, but we are not going to split hairs about the way we scored.”

Croatia captain Luka Modric: “It’s a great start for Croatia. We deserved to win. Nigeria played well, but we were better. I’m happy that I scored the penalty.

“I believe that on the back of this win, we will up our game and continue our journey in the way that we planned before coming here.”

No shots on target for 59 minutes – the key stats

Croatia face Argentina in Nizhny Novgorod in their second Group D game on Thursday (19:00 BST), while Nigeria go to Volgograd to play Iceland. Both matches are live in the UK on BBC One.