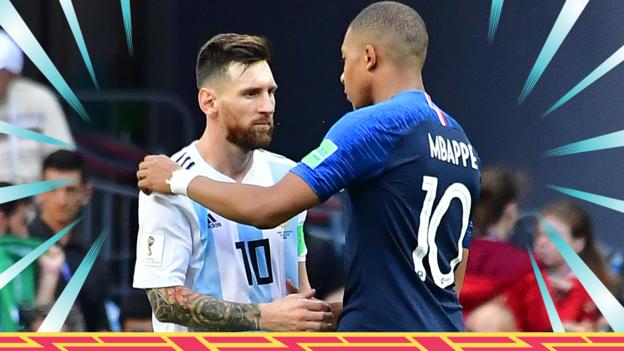 When Lionel Messi and Kylian Mbappe embraced at the end of a breathless World Cup classic, it was a striking moment that seemed to confirm the passing of greatness from one player to the next.

Everyone present at the electrified Kazan Arena on Saturday left the stadium knowing they had witnessed a special match, a knockout game for the ages.

And one player in particular set the spine tingling.

Mbappe is only 19 years old but he scored two goals and ran with blistering pace from his own half to win a penalty for the opener in France’s 4-3 victory over Argentina, a win that moves Didier Deschamps’ talented side into the quarter-finals.

It was a spell-binding performance that defined a match whose outcome signals France’s real potential to go all the way in Russia and claim their second World Cup trophy.

Mbappe – the forward who has everything

Mbappe was not even born when France won this competition on home soil in 1998.

Neatly, Michael Owen’s brilliant slalom through the Argentina defence at that tournament, which was so like Mbappe’s here for the opener in Kazan, came exactly 20 years ago – on 30 June 1998.

Mbappe, who was born on 20 December 1998, is technically still on loan at Paris St-Germain from Monaco but is expected to join the French champions for 180m euros (£165.7m) as the second most expensive player of all time. Only the 200m euros (£177m) PSG paid for Brazil forward Neymar in 2017 surpasses that fee.

It is not just searing pace Mbappe is blessed with but sublime skill, quick thinking, two clever feet, a cool head, bravery, belief and a brutal eye for goal. His two finishes were predatory, low and powerful.

“It was an incredible performance from a centre forward who has the lot: blistering pace, goals, touch and technique,” said former England captain Alan Shearer, speaking on Match of the Day.

“At 19, to put in a performance like that, with millions watching and Messi at the other end, it was simply brilliant.”

Mbappe, from the suburbs of Paris, only made his international debut last year. His rise to the top has been dizzying since he burst on to the scene in the 2016-17 season, scoring 26 goals in 44 games as Monaco reached the Champions League semi-finals and won Ligue 1.

His two goals here utterly wiped out Argentina’s gathering momentum and announced his supreme talent to the world.

Not since 1958, when the legendary Brazilian Pele, then 17, found the net twice against Sweden in the final, has a teenager scored twice in a World Cup game.

“I’m very happy, and it’s flattering to be compared to a great player like Pele but he’s in another category,” Mbappe said.

“Still, it’s great to join the list of players that have achieved such feats.”

Another day of suffering for Messi

This was a match that inflicted more agony on Messi, the five-time Ballon d’Or winner who seems destined never to shine as only he can on the biggest stage of all.

Right after the final whistle, Messi did not look back as he and Mbappe came together and parted, but the young French striker did steal a brief final glance behind him.

He would have seen the hunched back of Argentina’s iconic number 10, broken by the weight of a whole nation’s expectation. Messi dreamed of matching those demands but was once again unable to conjure his masterful best when it counted most.

He provided two assists – one inadvertently as his shot was deflected in by Gabriel Mercado when Argentina took the lead, the other a sublime cross that found Sergio Aguero in the 93rd minute.

That was too little, too late, a reminder of what might have been at the end of another largely peripheral display at this World Cup.

Perhaps the moment that summed his afternoon up best was his sole shot on target, a strike in the 83rd minute that he failed to truly connect with and that Hugo Lloris gathered with ease.

Six days after he turned 31, as he walked off the pitch with his head bowed and his captain’s armband held in his hands, Messi could well have been turning his back on the World Cup for good, and on international football altogether.

He did score a sublime opener in the narrow victory over Nigeria that dragged Argentina through to the knockout stage. Afterwards, Messi said he had “never known suffering like it”.

His words came after having suffered plenty with Argentina before – including three consecutive defeats in major finals when Germany claimed the 2014 World Cup and Chile beat them to the Copa America in 2015 and 2016.

Messi said he was retiring after the 2016 defeat but changed his mind and helped drag his team-mates through qualifying for this World Cup, scoring a hat-trick in a decisive final match against Ecuador that rescued a poor campaign.

The legacy of his remarkable achievements in club football with Barcelona will not be tainted by this low.

But nonetheless there will forever be a regret and a sadness that a player as talented as Messi looks likely to have one thing missing: a World Cup he defined, which is exactly what Diego Maradona did in 1986.

It is remarkable to think that he may forever remain without a single goal in the World Cup knockout stage.

End of an era for Argentina?

This defeat could well be the end for Argentina’s manager Jorge Sampaoli, too. The expectation among many is that he will now leave.

Although the former Sevilla boss would not discuss his future after the game, ex-Argentina and Tottenham midfielder Ossie Ardiles said the “greatest mistake Argentina made was to put Sampaoli in charge”.

He added: “His only plan was to give the ball to Messi and hope for a miracle.”

There is no doubt about what Javier Mascherano will do next – he announced his international retirement while holding back the tears in a TV interview immediately after the defeat.

At 34, Mascherano is the eldest of a generation that is now coming to an end. By the time the next World Cup comes around in 2022, Sergio Aguero, Gonzalo Higuain and Angel di Maria will all be 34.

The question many Argentine journalists are asking is: Where is the next wave coming from?

It is not a problem shared by France. Barcelona’s 21-year-old forward Ousmane Dembele was on the bench, Antoine Griezmann is still in his prime at 27 and there should be much more to come from Paul Pogba at just 25.

Alexandre Lacazette, Kingsley Coman, Adrien Rabiot and Anthony Martial did not even make this squad.

Should Mbappe continue to perform as he did in Saturday’s thriller, this could develop into a very special tournament for him and France.