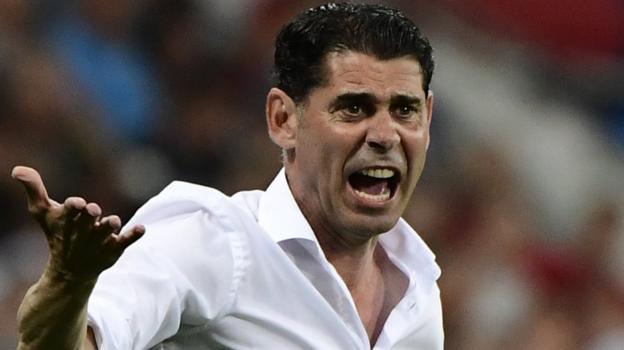 Fernando Hierro, who led Spain at the 2018 World Cup, has stepped down as coach and will not return to his former role as sporting director.

Hierro was placed in temporary charge of the team after Julen Lopetegui was sacked on the eve of the tournament.

However, the 2010 world champions were knocked out on penalties by hosts Russia in the last 16.

Hierro, 50, has decided to “seek new horizons”, according to the Spanish football federation (RFEF).

A statement said the former Real Madrid player had “declined” to return to his previous role and has opted to “undertake new professional challenges”.

Lopetegui was sacked two days before their opening World Cup match with Portugal after he was named Real Madrid boss.

In Russia, Spain topped Group B under Hierro. However, they conceded a late equaliser against Portugal and trailed Morocco 1-0 and 2-1 before scraping a draw in injury time.

After their surprise exit to Russia, Hierro said he accepted responsibility for the team’s failure to advance any further.

“We all tried to give it our best but that’s football,” he said.

“I don’t think you can talk about the team breaking down or collapsing. There’s a fine line between winning and losing.”