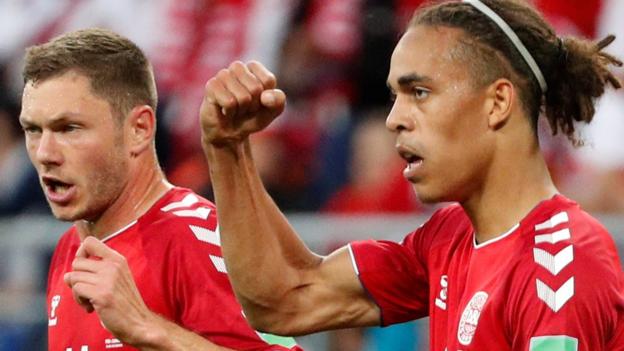 Denmark began their World Cup campaign with a hard-fought victory against a Peru side that had earlier missed a penalty.

The South Americans were awarded a spot-kick after consultation with the video assistant referee but Christian Cueva, the man fouled, shot over the crossbar.

That miss proved crucial as the Danes hit Peru on the counter-attack in the second half with Christian Eriksen releasing Yussuf Poulsen, who had conceded the penalty, and he fired past Pedro Gallese.

Peru were denied an immediate equaliser when Denmark goalkeeper Kasper Schmeichel produced a fantastic one-handed save to deny Edison Flores.

Substitute Paolo Guerrero, only able to play after a Swiss tribunal lifted a 14-month drugs ban, backheeled a chance wide as Denmark held on.

All four teams in the group are in action again on Thursday as Denmark meet Australia in Samara (13:00 BST), before France take on Peru in Ekaterinburg (16:00).

VAR once again makes the headlines

After Griezmann’s spot-kick for France against Australia, Peru were given a penalty after referee Bakary Gassama had initially missed Poulsen sliding in and taking out the standing leg of Cueva.

But after play had continued, it was pulled back with Gassama checking the footage and then pointing to the spot.

However, Cueva then wasted his opportunity by blazing over the top with the distraught midfielder in tears as he left the pitch at half-time.

That penalty was the fifth awarded in only the seventh match of the tournament, with Cueva joining Argentina’s Lionel Messi as the only players to have missed, after the Barcelona forward failed from 12 yards in his side’s 1-1 draw with Iceland.

BBC pundit Rio Ferdinand said: “It was a clear and obvious penalty, and the Gambian referee made the right decision. But the penalty is still travelling now.

“He was the player Peru looked to in terms of creativity but his run-up was all wrong. But Messi missed a penalty earlier today and it happens to the best.”

Peru were the better team in Saransk, but left with nothing as Denmark grabbed a goal on the counter-attack and then defended superbly to hold on to that lead.

It took the Europeans 27 minutes to have their first shot at goal – Thomas Delaney shooting over from 25 yards – and 39 minutes before their first shot on target when Lasse Schone, on for the injured William Kvist, shot at Pedro Gallese.

Eriksen had scored 16 times in his previous 18 internationals, including a hat-trick in the 5-1 win over Republic of Ireland in the second leg of their play-off to take the Danes to Russia, but had been subdued in the first half.

However, he was involved in the only goal of the game as he played in Poulsen, who made up for conceding the penalty with a fine finish.

Schmeichel, one of five English-based players to feature for Denmark, made a number of fine saves as he denied Flores and Jefferson Farfan.

Match-winner Poulsen also produced a vital header on the line to deny Guerrero at the end.

Peru were playing in a World Cup finals for the first time since 1982, with more than 40,000 Peruvians travelling to Russia to cheer on their team.

When they qualified for the tournament, the exuberant crowd celebrations that greeted Farfan’s opening goal in the play-off win over New Zealand in Lima produced enough seismic activity to trigger earthquake detection alarms in Peru’s capital city.

But, despite having 17 attempts in Saransk – the most by a team without scoring so far in the 2018 World Cup – there was no goal for the Peru fans to cheer this time around.

Peru’s qualification for this tournament had been fortunate as they had lost 2-0 against Bolivia in qualifying, but that result was overturned because the Bolivians fielded Paraguay-born Nelson Cabrera as a late substitute for the final 11 minutes.

Cabrera did not meet Fifa rules of eligibility and the result was given as a 3-0 win to Peru, who would have finished seventh in South American qualifying and been eliminated without those three points.

They may have been lucky to reach Russia but their performance against Denmark will have encouraged their travelling fans and they will still be hopeful of qualifying for the last 16, although they need to take their chances against France on Thursday.

Another good start for Denmark – the stats