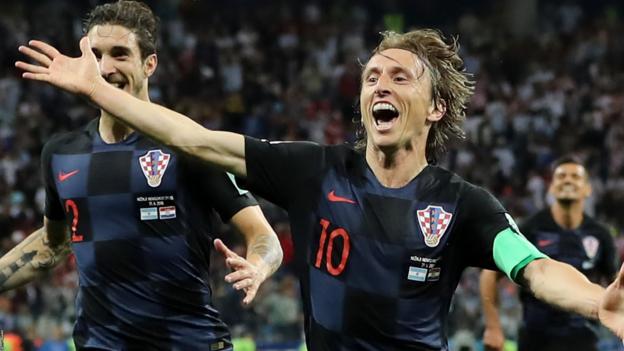 Lionel Messi and Argentina are facing the very real prospect of an early World Cup exit after a dreadful error from goalkeeper Willy Caballero set Croatia on their way to victory and a place in the last 16.

On a night when so much was expected of Messi, Chelsea reserve goalkeeper Caballero made the most telling contribution to his team’s fate with an attempted chip over Ante Rebic that backfired badly, allowing the striker to volley into an exposed net in the 53rd minute.

Messi – adrift for much of the match, especially during a pedestrian opening half – helped to rally his side after going behind, but neither he nor substitute forwards Gonzalo Higuain and Pablo Dybala could find a way through.

The closest Messi came was a half-chance, a snatch at a rebound from a Maximiliano Meza shot which was blocked by Danijel Subasic and turned behind to safety.

It was a dogged defensive second-half display from Croatia, illuminated by a moment of magic from their own masterful number 10, Luka Modric.

His curled shot from range drifted beautifully beyond Caballero’s gloves to put his side two ahead, before Ivan Rakitic’s injury-time tap-in sealed a victory that moves the Europeans through to the knockout stage and also leaves them in a strong position to win the group.

For Argentina, they are no longer in control of their own destiny.

This defeat follows their opening 1-1 draw with Iceland, in which Messi missed a penalty, and now even a heavy win over Nigeria in their final game on Tuesday may not be enough to send them through to the next round.

Should Iceland beat Nigeria in their second group game on Friday, Iceland would need only a draw against Croatia in their final match.

For Barcelona forward Messi, Argentina captain and a prolific performer at club level, this was just another harrowing chapter in his recent history of pain and disappointment in the international game.

Carrying the expectations of a nation

Before the match as the national anthem played, the camera panned across Messi’s face. He looked like a man carrying the expectations of a nation.

In the first half they were easily exposed on the flanks, conceding three first-half chances behind the full-backs which a more ruthless side than Croatia would have punished.

At the other end, Enzo Perez missed a sitter and looked out of depth in midfield, while Messi was often wandering in empty space with the game played somewhere else.

It was a strange thing to watch, to see the player who is so often nothing less than masterful at the highest level of the club game not stepping forward into the spotlight.

There seems to be real tension – a barrier almost – to success in the blue and white stripes of Argentina.

It has become more pronounced and painful over the past four years, during which Argentina lost three major finals with Messi as captain.

After the most recent of these – defeat by Chile in the 2016 Copa America – Messi announced his international retirement, having missed a penalty in the shootout.

He reversed the decision a month later but now, three days before he turns 31, you feel this really was the last big chance he had of propelling his side to victory on the biggest stage of all.

Even if international success does not come – and it looks a very long way off – he will still be the player who has achieved so much and seduced so many in the 14 years he has shone with Barcelona.

But at this tournament where Cristiano Ronaldo is again dragging Portugal along with his goals and drive, there will forever be regret and a sadness that a player as talented as Messi will always have one thing missing: a World Cup he defined.