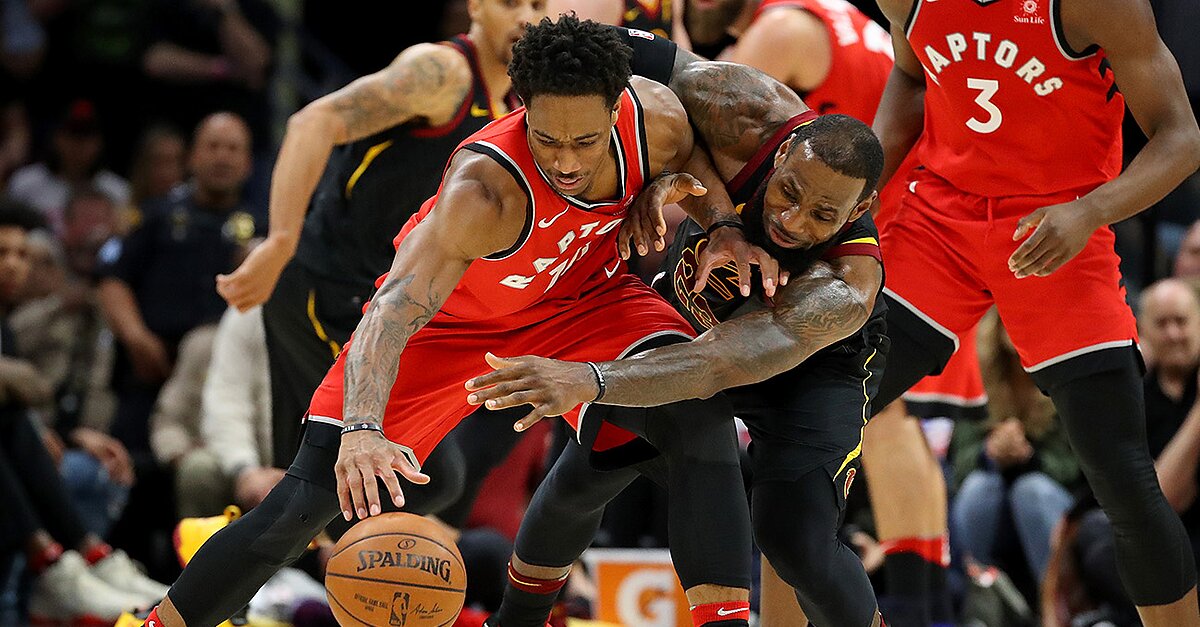 As LeBron James pushed Toronto to the brink with a breathtaking buzzer beater, Raptors guard DeMar DeRozan was relegated to life as a helpless bystander.

The Cavaliers defeated the Raptors 105-103 at Quicken Loans Arena on Saturday to take a 3-0 lead in their second-round playoff series. James poured in a game-high 38 points, capping another exquisite performance with a picture-perfect runner as time expired to seal the win.

For DeRozan, the excruciating defeat was a night to forget across the board. He scored just eight points (on 3-12 shooting), his lowest total since before the All-Star break. He posted a game-worst minus-23 in 28 minutes, marking his worst plus-minus of the entire season. And he rode the pine for the final 14+ minutes of Game 3, as coach Dwane Casey benched his four-time All-Star in favor of Fred VanVleet and C.J. Miles.

“It was extremely hard,” DeRozan said of his late-game benching, according to TSN Sports. “I never want to be over there watching, especially the competitor that I am. I just want to be out there helping my team. It definitely sucks to be watching.”

While Casey’s decision to go to his bench was unusual, given DeRozan’s status as the face of the Raptors and his $27.7 million contract for 2017-18, it wasn’t all that difficult. Through three games, Toronto has been +24 with DeRozan off the court and minus-45 with him on the court.

As in years past, DeRozan has struggled to translate his regular-season performance to the playoffs. Through nine playoff games, he’s shooting 43.6% from the field and 28.6% from deep, off his season averages of 45.6% and 31.2 3P%. Against Cleveland, DeRozan’s bread-and-butter has dried up: He’s attempted a total of seven free throws in three games after averaging seven attempts per game for the season.

His supposed improvement as a three-point shooter has also completely failed to materialize: Sixteen different players in this series have hit at least one three-pointer, but DeRozan (0-9 through three games) isn’t one of them. Remarkably, the mid-range specialist has now gone 13 consecutive playoff games against Cleveland without a single three-pointer, shooting 0-16 in 480 minutes combined in those games, dating back to 2016. With Toronto needing to dig out of a double-digit deficit, it’s no wonder Casey turned to superior shooters.

“Everybody was joining in on the party,” Casey explained. “[DeRozan] had a tough shooting night, 3-12. Guys are going to have that. Serge [Ibaka] had one the other night [in Game 2]. [DeRozan] had one tonight. … He wasn’t the reason we lost. He’s a pro. He’s had tough games before. I think DeMar DeRozan will bounce back.”

With DeRozan sitting, Kyle Lowry did his best to keep Toronto afloat, guiding a furious comeback and a 38-point fourth-quarter for the Raptors. Lowry finished with 27 points and seven assists, turning in his best game of the series.

Alas, it wasn’t enough thanks to James’s heroics. During his post-game press conference, Lowry admitted that he felt “lonely” without DeRozan, his usual podium partner.

“We had a group going in the fourth and coach rode with it,” Lowry said. “I’m not worried about it. A tough shooting night. DeMar was up cheering with everybody else. He’s a great teammate. He wasn’t pouting or anything.”

Toronto is now one loss away from being eliminated from the playoffs by Cleveland for the third straight year. What’s more, the Cavaliers could sweep the Raptors for the second straight time and notch their 10th consecutive head-to-head playoff win by taking care of business in Game 4 on Monday.

“Our pride is on the line,” Casey said. “Our season is on the line for the next game. They’re all devastated. We’re all hurt. To lay your heart out like that, to lose on a last-second shot like that, it hurts.”