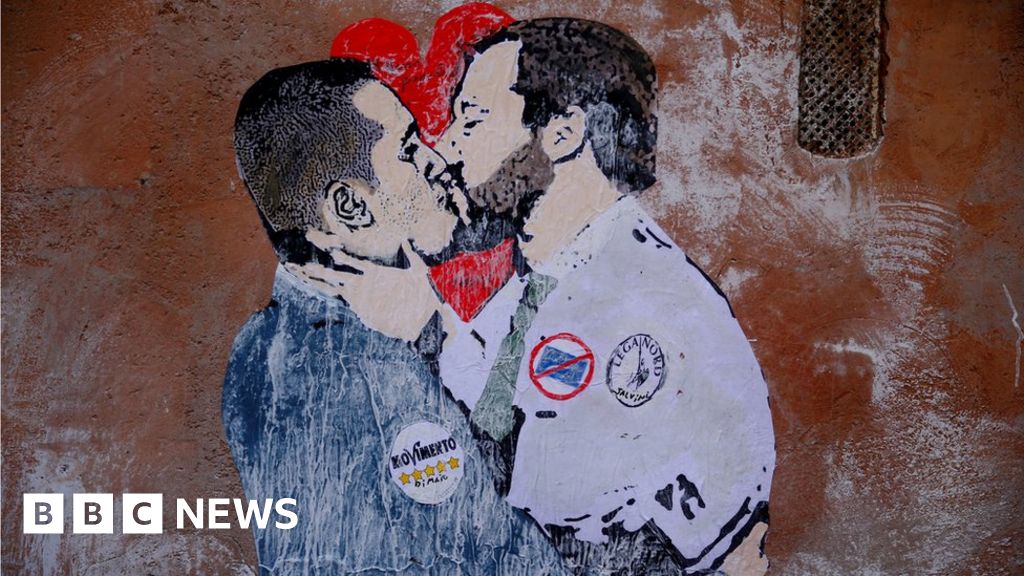 Since Italy became a Republic in 1946 there’s been a steady predictability to its politics.

Citizens vote, no single party gets a majority, everyone negotiates, then a coalition government is formed.

The system relies on give and take, and compromise.

For decades, this has kept things moving, and prevented the country from ever having to call a second election in the same year. Since 1946 Italy has had 19 general elections, the same number as the UK.

Two rival populist groups, the anti-corruption Five Star Movement and the anti-illegal migrant League party, came out ahead in the 4 March general election.

Neither of the two party leaders has any experience in national government.

Five Star was co-founded by comedian Beppe Grillo in 2009, as an anti-establishment movement dedicated to fighting against corruption and professional politics.

Mr Di Maio is keen to show that he lives like a normal citizen. During weeks of coalition talks, he drove himself to the president’s palace in a small, silver car, instead of getting chauffeured in a black limousine like traditional politicians.

The Northern League was founded in 1991 as a breakaway movement for Italy’s more wealthy northern regions. In 2013, Matteo Salvini took over as leader, and turned the regional movement into a national party, aiming to lead the country it had previously wished to leave.

Matteo Salvini, 45, also claims to be a non-traditional politician. He makes a deliberate point of being ill-at-ease in a suit, barely ever doing up the top button of his shirt while wearing a tie.

What is different this time?

The emergence of Five Star and The League is a reflection of Italians’ unhappiness with a system that has left the country with weak economic growth of 0.3%, chronic youth unemployment of around 32%, and worries about social cohesion.

During three rounds of talks after the general election, Italy’s President, Sergio Mattarella, tried to work out various configurations of a potential coalition government. But no-one was ready to back down.

So, an exasperated president has now had to resort to suggesting his first back-up option: the formation of a so-called neutral, technocratic government to see the country through to the end of the year.

As a stop-gap measure, this has sometimes worked before – most notably when the economist Mario Monti replaced Silvio Berlusconi in 2011. But this is normally the tactic a president uses to replace a government in mid-term, not one to deploy right after a general election.

What will happen next?

To no-one’s surprise, Five Star and The League show no interest whatsoever in agreeing to a caretaker government. Between them, they have the votes in parliament to defeat the president’s suggestion.

Five Star and The League each want to skip straight to the president’s final option – the calling of an unprecedented second general election in the same year. There’s a simple reason for this: each party thinks that it can improve its own position in a second vote.

But what if Italians vote exactly the same way they did in the first vote? The country’s seven-decade old system doesn’t really have a plan for that.