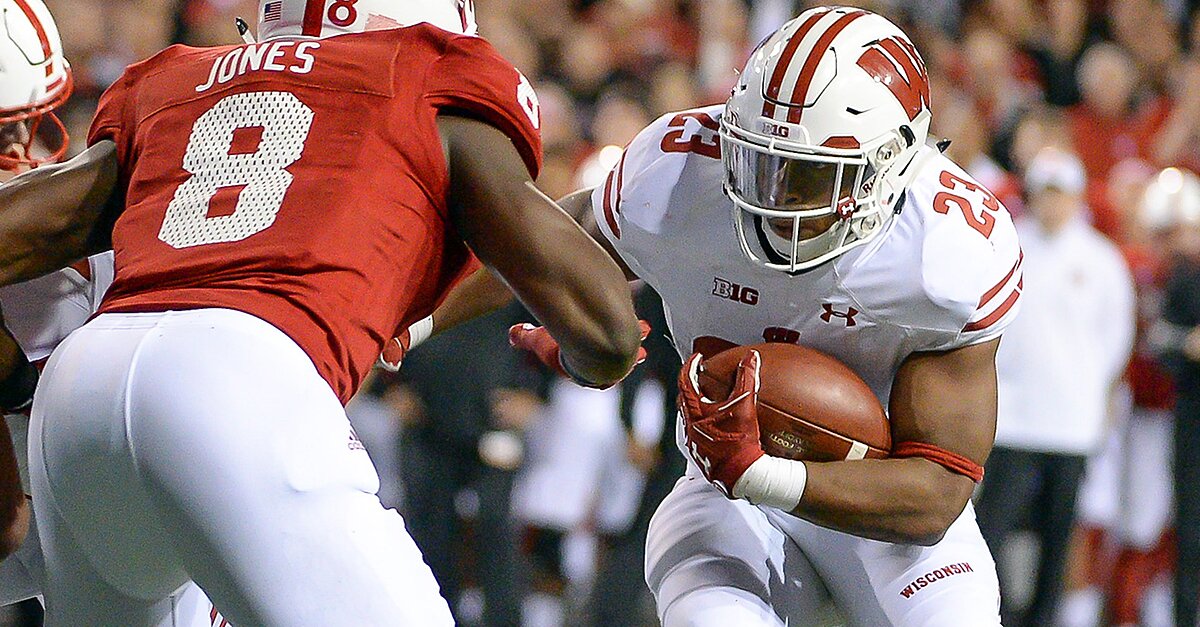 In four years of the College Football Playoff, nine different programs (Alabama, Ohio State, Oregon, Florida State, Michigan State, Clemson, Oklahoma, Washington, Georgia) have made major college football’s final four. Which could be the next program to join the club?

From @TweeterLeGrand: Which program will make a CFB Playoff first: Wisconsin, Nebraska, Stanford, LSU, Texas or UCLA? Any of them in next five years?

One of those might make the playoff this year, and it’s Wisconsin. This could be the best Badgers team of this recent run of success. All five starting offensive linemen return. Jonathan Taylor will be trying to top a true freshman season that featured 1,977 rushing yards (6.6 yards a carry!) and 13 rushing touchdowns. Meanwhile, this could be the most athletic group of receivers Wisconsin has had.

Quarterback Alex Hornibrook is an efficient down-to-down passer (8.3 yards per attempt last season) who happens to throw too many interceptions (15 last year). If he can make the latter figure fall and equal or better the former figure, Wisconsin’s offense could be in pick-your-poison territory.

Plus, the Badgers are exceedingly well-coached on defense and have a defensive tackle who can do this:

Wisconsin’s problem is that it isn’t as athletic across the board as Ohio State, Penn State and (maybe) Michigan. You saw the Buckeyes exploit that in last year’s Big Ten title game. But the Badgers usually compensate for this by being exactly where they’re supposed to be on nearly every defensive down. Against Ohio State last year, the Badgers couldn’t cover the occasional mental lapse with sheer physical superiority, but they still played well enough to be in a competitive game in the fourth quarter even though nearly every player on the opposing team was ranked higher as a recruit than his Wisconsin counterpart.

So if Wisconsin is even slightly more athletic this year, the Badgers absolutely are a playoff contender.

As for the rest, Stanford should be in the mix for the Pac-12 North title again, but the Cardinal have to go to Oregon and Washington this season. Their formula keeps working, though. So it’s absolutely possible to see Stanford making the playoff in the next five years.

Nebraska should be what Wisconsin already is—not stylistically, but in terms of competitiveness—but it may take a few years for Scott Frost to get the Cornhuskers there. Texas, meanwhile, needs to stop being mediocre before we can even think about talking playoffs.

LSU can be in that mix on an annual basis if Ed Orgeron can get the talent back up to 2003–14 levels. That, not quarterback play, has been the biggest issue for the Tigers in the recent past.

UCLA is an interesting one. If Chip Kelly is as innovative there as he was at Oregon, he might own the Pac-12 South in a few years because he’s much closer now to the kind of line-of-scrimmage players he needs to compete at an elite level. But it remains to be seen how he’ll adjust to the way the rest of college football adjusted to his Oregon schemes after programs across the country began borrowing from them.

From Jay: Why is the great Myles Gaskin continuously ignored by most of the national media?

So is Washington safety Taylor Rapp!

So is Washington quarterback Jake Browning!

In fact, Jay, it is this preponderance of really good players that has most of the national media members who make such projections picking Washington to win the Pac-12 in 2018.

But if having an inferiority complex about it helps you get through the long offseason, you go ahead and live your truth.

From Mark: Coach Frost seems intent on bringing his uptempo no-holds-barred O into the stuffy Big Ten. Can he be successful or will he flame out against the traditionalists?

This is the danger of trafficking in stereotypes. Occasionally, you miss when something evolves. The Big Ten is not a stuffy league at all. It was actually Purdue (under Joe Tiller) and Northwestern (under Randy Walker) who helped inspire offenses across the country to open up in the first decade of this century. Urban Meyer’s Ohio State offense borrows from 1950s single-wing principles, but it also relies heavily on the read option, run-pass option plays and tempo.

Now, if Mark is talking specifically about Iowa and Wisconsin—which do run offenses similar to the ones that dominated the Big Ten in the 1990s—then maybe he has a point. But my guess is some aspects of the offense Frost will run at Nebraska will pre-date the pro set. The option elements of what Frost has run at Oregon and UCF look more similar to what Nebraska and Oklahoma might have run in the 1970s and 1980s. And that’s great. Because that’s what Nebraska should be running.

From Cameron: Jeaux Burreaux, Andy. That’s not a question, but you get it.

I definitely do, Cameron. And that’s how a quarterback from Ohio becomes an honorary Louisiana citizen even before he wins the starting job.