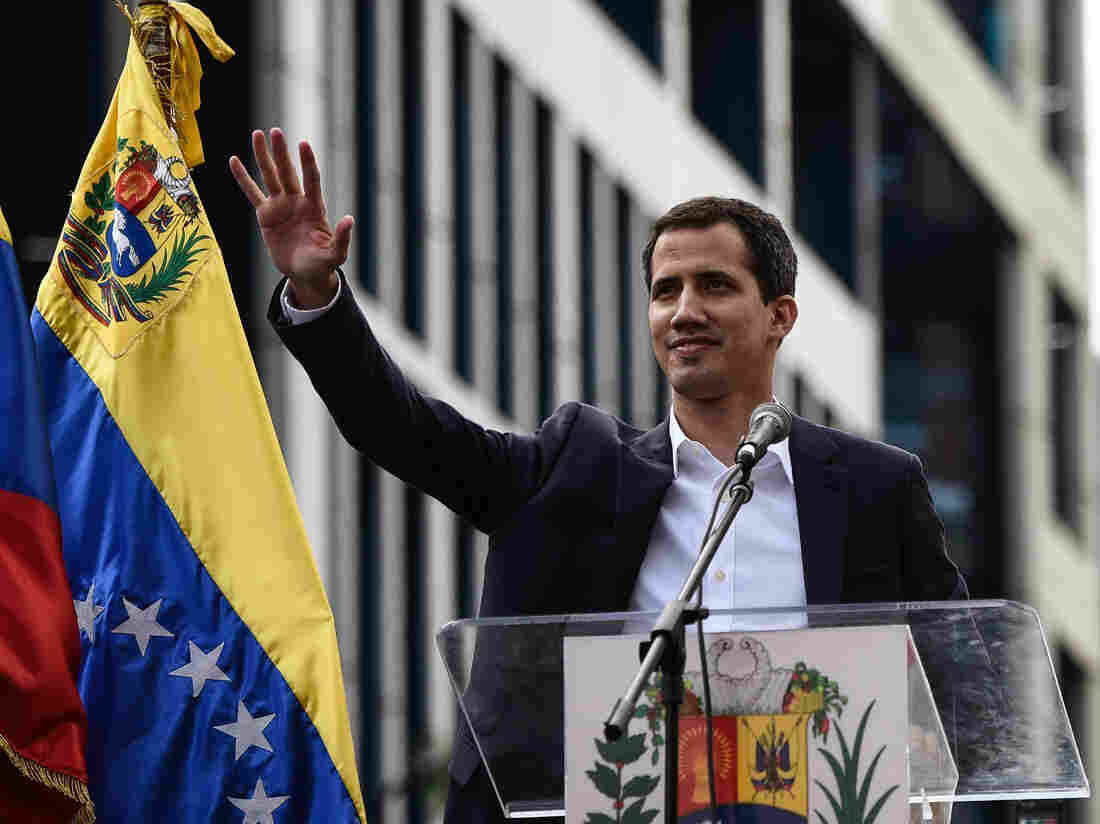 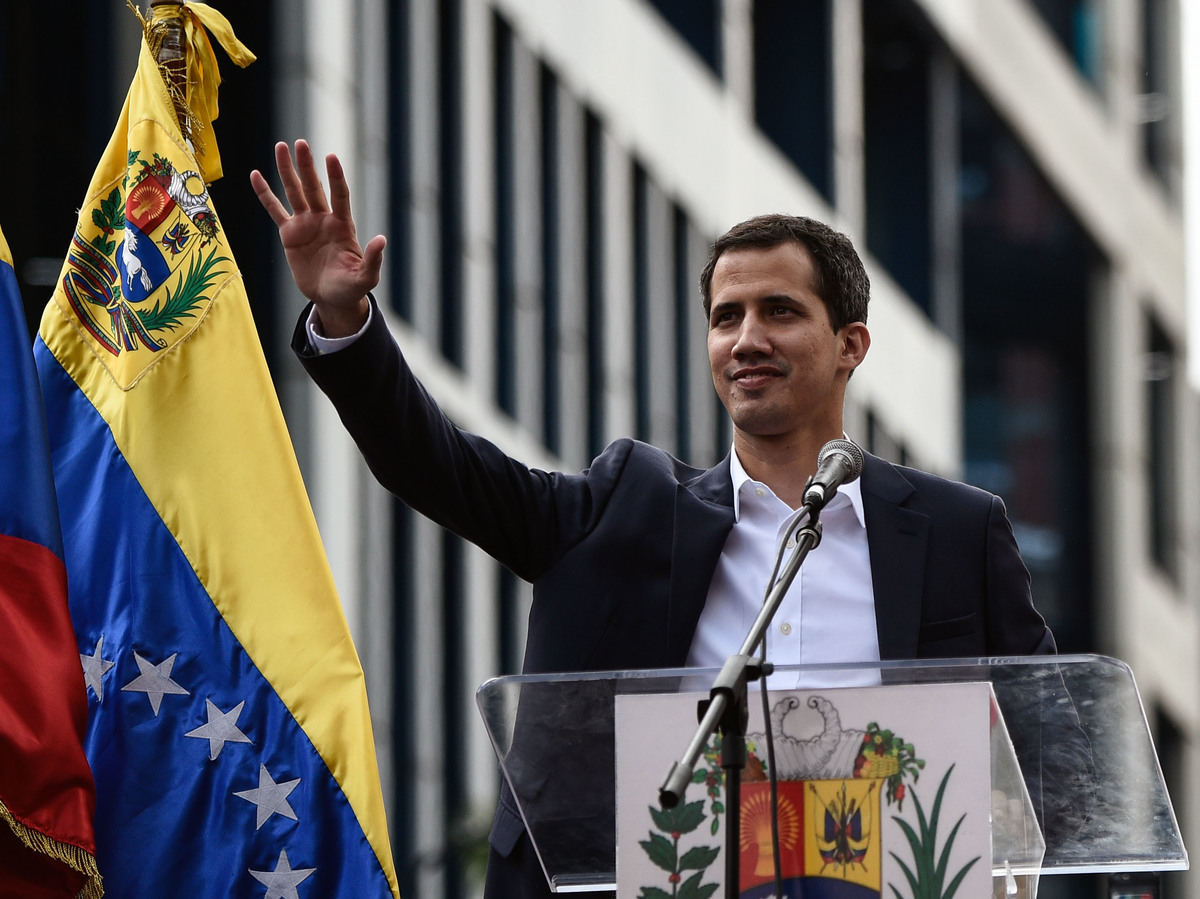 Venezuela’s National Assembly head Juan Guaidó waves during a mass opposition rally, during which he declared himself the country’s acting president on Jan. 23.

In less than a month, Juan Guaidó has risen from obscure, junior lawmaker to self-proclaimed interim president of Venezuela and the most serious threat yet to the authoritarian government of Nicolás Maduro.

Guaidó, who defied Maduro by taking the oath of office on Wednesday, claims to lead a transitional government that will call free elections and return Venezuela to democracy. The 35-year-old was immediately recognized as Venezuela’s legitimate leader by the United States, Canada and most Latin American nations and received widespread support from European countries.

In a speech Friday to cheering supporters at an outdoor plaza in Caracas, Guaidó proclaimed: “We have awakened from the nightmare, brothers and sisters.”

Maduro, who has led Venezuela into food shortages, hyperinflation and political repression during six years in office, is refusing to budge. His ruling Socialist party controls nearly all government institutions. On Thursday, Defense Minister Vladimir Padrino López declared that the nation’s powerful armed forces — widely considered to be propping up the government — recognize Maduro as Venezuela’s true president.

But at least for now, Guaidó is breathing new life into an opposition movement that had been deeply demoralized by internal power struggles and government repression.

“Thirty days ago, the opposition was demobilized and fractured with no leadership,” said Michael Penfold, a global fellow at the Woodrow Wilson International Center for Scholars in Washington. “But that’s not the case anymore. Guaidó represents a sparkle of hope.”

“I think Guaidó is delivering exactly what the opposition wanted at this point, which is a bold, risk-taking response,” said Javier Corrales, a Venezuela expert and professor of political science at Amherst College.

A youthful-looking industrial engineer, Guaidó, got his start in politics by organizing student protests against the late Hugo Chávez, who ushered in Venezuela’s socialist revolution two decades ago. In 2013, Chávez died of cancer and was succeeded by Maduro.

As a member of the Popular Will party, Guaidó in 2015 won a seat to the National Assembly – Venezuela’s legislature – amid an opposition sweep of congressional elections. But that momentum quickly stalled.

Anti-government demonstrations were crushed by security forces while an effort to remove Maduro through a recall election was vetoed by the government. The opposition’s most charismatic leaders were arrested, forced into exile or stripped of their right to run for public office. Last year, Maduro won another six-year term in a presidential election widely considered a sham by international observers.

Still, the opposition was determined to challenge Maduro’s grip on power. It hatched an audacious plan to coincide with the start this month of what many view as Maduro’s illegitimate second term. Guaidó became its leader.

Partly because more prominent politicians have been sidelined, the National Assembly in early January named Guaidó as its president. Venezuela’s constitution states that the head of the National Assembly takes over should the presidency become vacant, as the opposition claims it has under Maduro.

After consulting with U.S. and Latin American officials, according to the Associated Press, the opposition organized nationwide street marches on Wednesday and held a make-shift outdoor ceremony where Guaidó took the oath of office and launched his parallel government.

In what amounted to his inaugural speech, Guaidó called on military officers to withdraw their support from Maduro.

“It has to be the Venezuelan people, the armed forces, and the international community that allow us to assume power, which we will not let slip away,” Guaidó told cheering supporters in what amounted to his inaugural address.

At least one high-ranking military official, Col. José Luis Silva, who serves as military attaché at the Venezuelan Embassy in Washington, has heeded Guaidó’s call. “As the Venezuelan defense attaché in the United States, I do not recognize Mr. Nicolás Maduro as president of Venezuela,” Silva said in an interview Saturday with el Nuevo Herald.

Guaidó lacks any control over government ministries but he is more than just a figurehead. Analysts say that swelling international support for him, coupled with Maduro’s diplomatic isolation, strengthens Guaidó’s claim to the presidency.

Frank Mora, who heads the Latin American and Caribbean Center at Florida International University, said Guaidó’s swearing-in ceremony could become a watershed moment, similar to the 2010 episode in Tunisia when an angry fruit vender set himself on fire and helped ignite the Arab Spring.

Alternative leadership in Caracas has also opened the door for the Trump administration to squeeze the vital flow of petrodollars to the Maduro government — which counts on oil for 95 percent of its export earnings.

One option would be to send the proceeds from purchases of Venezuelan oil to foreign accounts that could be set up and controlled by Guaidó’s governing team, said Francisco Rodríguez, a former economic advisor to Venezuela’s National Assembly. He said that diverting oil funds to Guaidó would have a “huge impact” on the Venezuelan economy and put more pressure on Maduro to leave office.

“The pieces are starting to fit together for a peaceful transition in Venezuela,” said Benjamin Scharifker, a leading Venezuelan intellectual and an opposition activist.

Earlier this month, he was briefly detained by security forces and fears are growing that he could be arrested. At Friday’s rally, Guaidó acknowledged that possibility but told supporters that if he were ever kidnapped, they should press ahead with nonviolent protests.