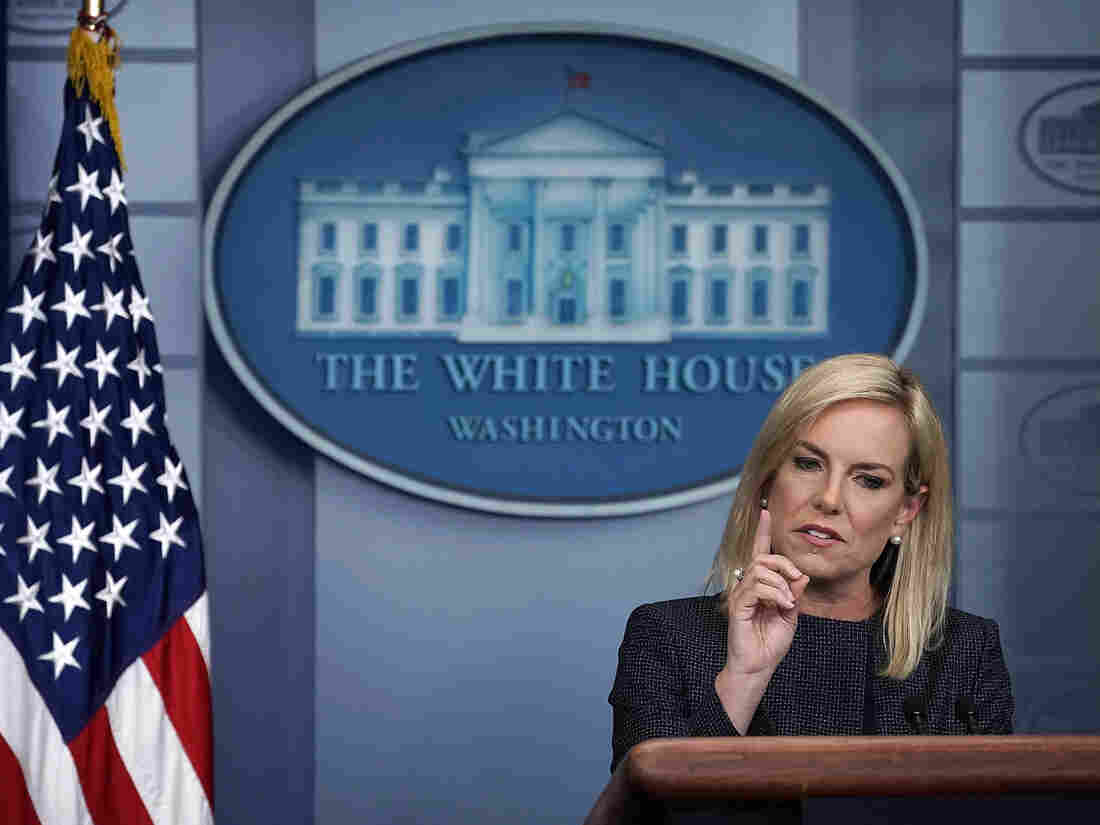 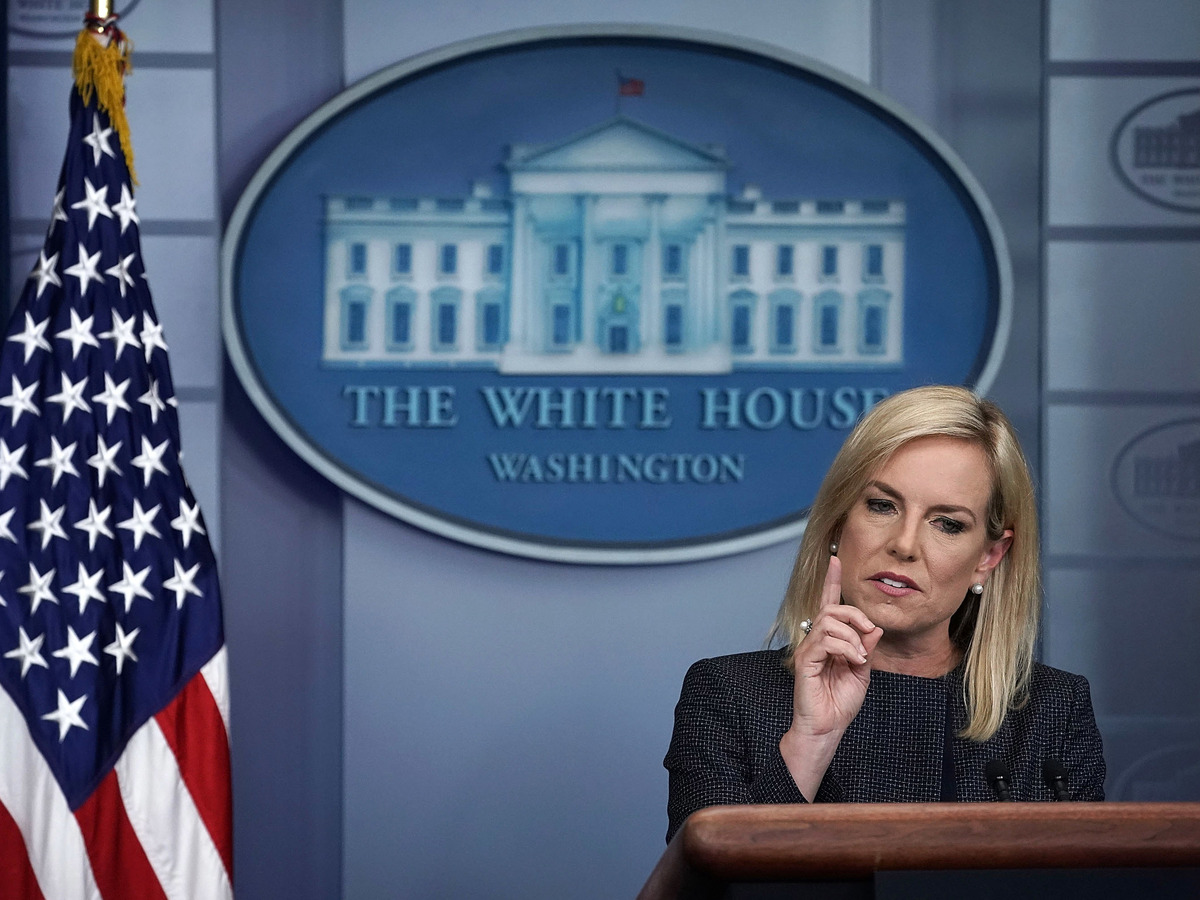 Homeland Security Secretary Kirstjen Nielsen speaks Monday during a White House news briefing about children being separated from their parents who enter the U.S. illegally.

This essay isn’t about spin, or splitting hairs, or differing opinions.

This involves a reality check about our expectations of the people who act in our name. About credibility at the highest levels of our government. About people whose words are heard abroad as speaking for our nation. About the public and the media that try, however imperfectly, to serve it.

On Monday, reporters relentlessly confronted Homeland Security Secretary Kirstjen Nielsen at a news conference held at the White House. They grilled her on the government’s policy of separating young children from parents seeking asylum after crossing the U.S. border with Mexico.

CNN’s Jeff Zeleny asked why that did not constitute child abuse. A second reporter questioned where girls were, noting that photos released by the government largely featured boys. A third reporter challenged President Trump’s compassion, noting his tweets indicated concern for almost anyone other than the family.

Nielsen did not back down, though her defense involved claims lacking much factual support.

“Those who criticize the enforcement of our laws have offered only one countermeasure: open borders, the quick release of all illegal alien families and the decision not to enforce our laws,” Nielsen said from the White House lectern. “This policy would be disastrous.”

To be clear: The claim there’s only the Trump way or anarchy doesn’t have much currency outside the administration and its allies in conservative media. Nor does the idea Trump couldn’t have acted until Congress changed the law.

For days, Trump’s fellow Republicans in Congress have said he could erase the practice — one put in place under his presidency — with a wave of the hand. Many of them publicly called upon him to do so.

Back on Monday, Trump’s homeland security secretary embarked on a series of insupportable assertions, none more fundamental than this: “It’s not a policy.”

But it was. Nielsen herself had said there needed to be a break in how Presidents Barack Obama and George W. Bush processed people coming across the border. If an intentional shift in the way the government handles people seeking asylum does not constitute a policy, what meaning does the word “policy” have?

Then there was the affront Nielsen said she took to a reporter’s asking whether she intended for parents to be separated from their children, and whether there was an underlying message:

Nielsen: I find that offensive. No. Because why would I ever create a policy that purposely does that?

Reporter: Perhaps as a deterrence?

You could call what she said a deception, an evasion or a technical nicety. NPR will not call what Nielsen said a lie because it cannot gauge her intent.

I report about the media for NPR and in so doing, I periodically cover NPR and its policies. I don’t speak for the network. I would say the word “lie” fits here.

Regardless, NPR and other news organizations say Nielsen was dead wrong: There was a policy with a clear underlying rationale.

Back in May, White House chief of staff John Kelly spoke with NPR’s John Burnett in an interview that made headlines around the world. Kelly told Burnett that the laws against people entering the country without legal status had to be enforced.

Kelly: The laws are the laws. But a big name of the game is deterrence.

Burnett: So family separation stands as a pretty tough deterrent.

Kelly, who is Nielsen’s predecessor at Homeland Security and her mentor, said much the same to CNN when considering the policy back in early 2017. So did U.S. Attorney General Jeff Sessions on Fox News Monday night.

So why would Nielsen seek to deceive the public?

Cast your mind back to the first week of Trump’s presidency, with spurious claims from the president and his press secretary about record crowds at the inauguration. Trump has issued more than 3,250 false or misleading claims in his first 497 days in office, according to an account by The Washington Post‘s Fact Checker column in late May. The paper quoted a psychology researcher from the University of California, Santa Barbara who said Trump’s repetition of falsehoods gave them greater credence among his core supporters.

That impulse emerged again on Friday. Trump spoke to a clutch of reporters surrounding him on the White House lawn as he strolled to pop on his favorite morning TV news show, Fox & Friends, which was helpfully camped out on the grounds. Trump deflected questions about the false claims his lawyers made last year on his behalf. The attorneys had denied — untruthfully — that Trump had anything to do with his son Don Jr.’s statements about the purpose of his meeting with Russians during the 2016 campaign.

Don Jr.’s statements turned out to be untrue. So were the denials of the president’s involvement, who, it turned out, dictated his son’s response to the Times.

The president made clear he didn’t care about the deception.

It’s OK, apparently, to deceive the public as long as it’s through the nation’s leading newspaper.

That’s what you might well call a double deception — a lie about a lie.

I sure would call it that.

But what you call it almost doesn’t matter.

More important is that the media and the public register a fundamental fact: Top people speaking for the United States aren’t telling us the truth — starting with the president.