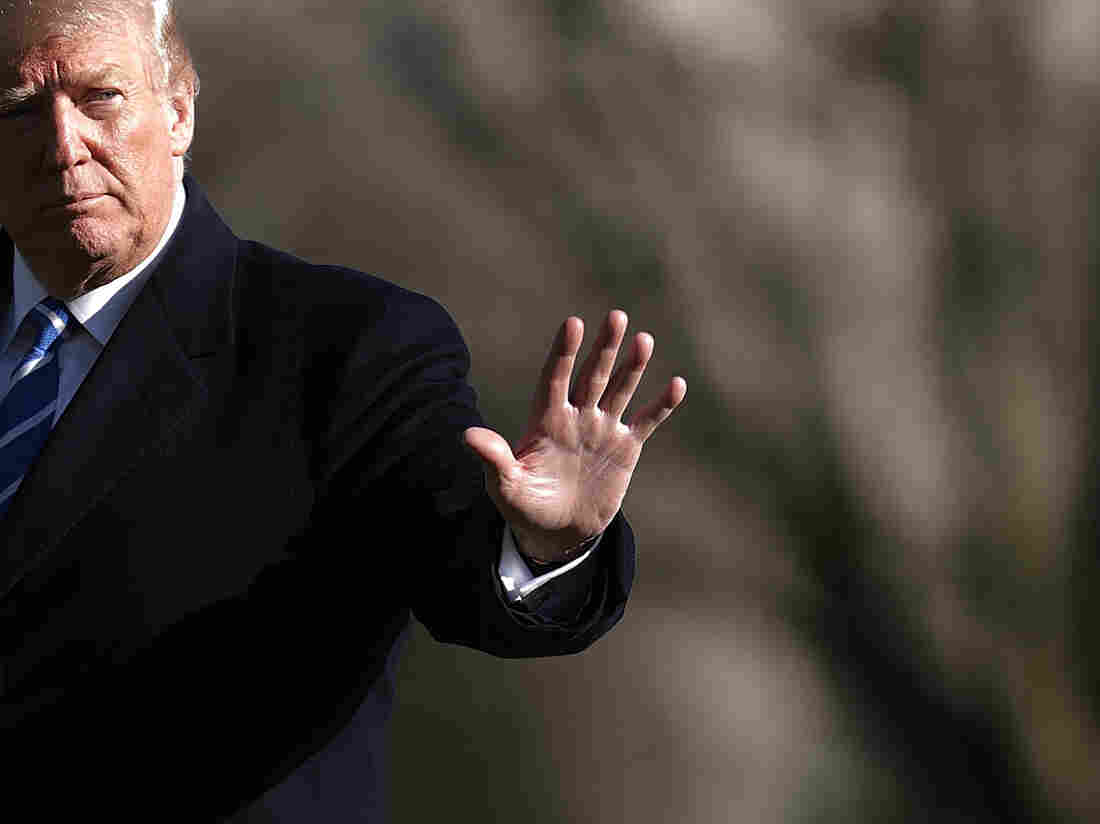 President Trump’s legal team appears divided over whether to grant an interview with special counsel Robert Mueller or whether to resist. Chip Somodevilla/Getty Images hide caption 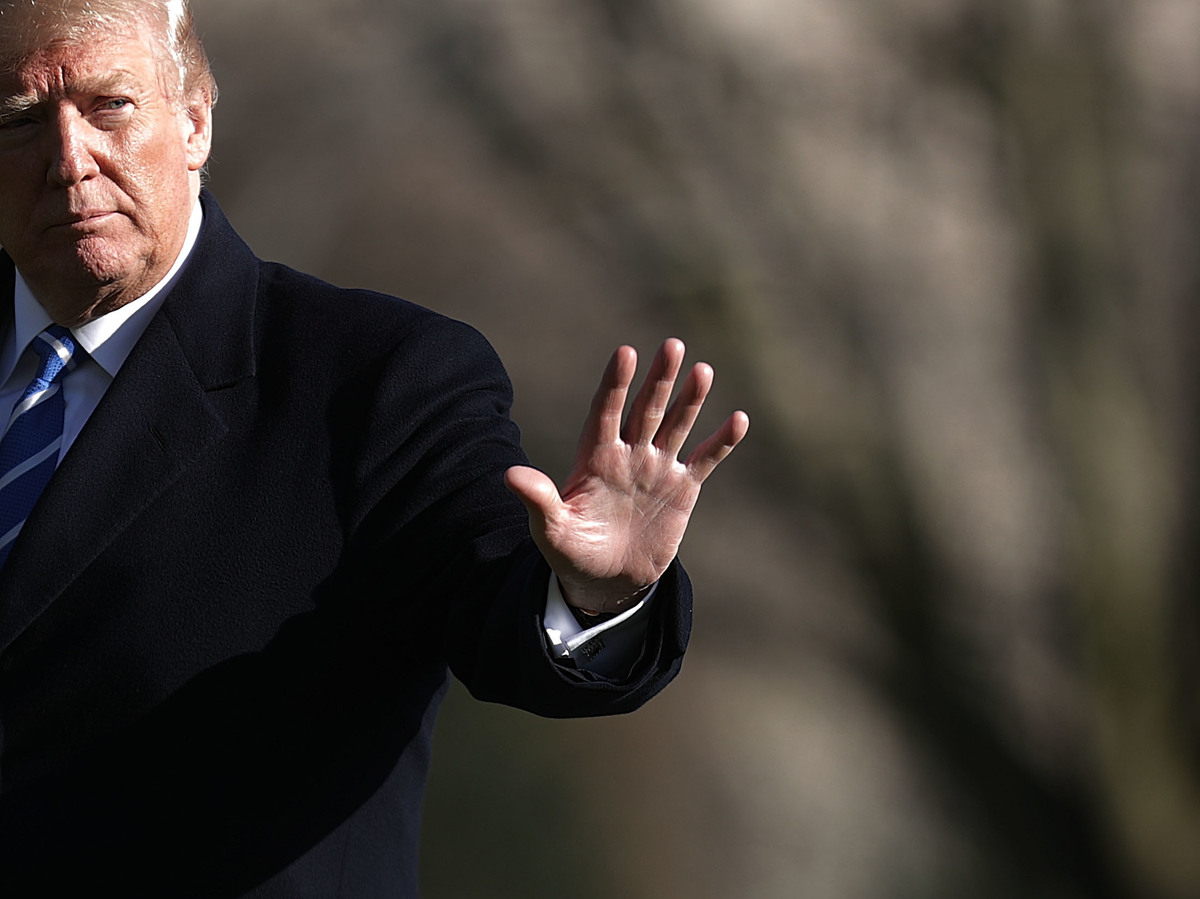 President Trump’s legal team appears divided over whether to grant an interview with special counsel Robert Mueller or whether to resist.

The slow-motion showdown between President Trump and Justice Department special counsel Robert Mueller has entered a new phase: a knife fight over how, when or whether the two men may meet for an interview.

Direct interaction between the president and the special counsel’s office has been possible all along, and in an earlier phase, Trump said he wanted to talk with Mueller — if his lawyers said it was OK.

Now, however, as actual potential questions are being aired and talk of potential subpoenas is bandied about, the president is less enthusiastic.

Here’s what you need to know about the state of play:

Can the Justice Department subpoena the president?

Yes — but it would be hardball. If Trump did not agree to an interview that complied with what Mueller’s team wanted, the special counsel’s office could try to compel Trump to appear before a grand jury, something that has never happened before.

In 1998, Justice Department independent counsel Ken Starr issued a subpoena to force President Bill Clinton to answer his questions. Clinton’s legal team responded by agreeing to an interview in which the president’s lawyers could be present and he could appear before the grand jury via video — and Starr withdrew the subpoena.

Could Trump resist a subpoena?

Ultimately no, legal experts have said, but it might take a long battle in court to get there. How long? No one knows — a subpoena from Mueller that Trump fought would be a novel legal problem and might require months of arguments or rulings.

Of course — the Constitution protects his right not to give evidence that would require he incriminate himself.

But there’s a political dimension here as well. Trump has criticized people who invoke their 5th Amendment rights. “The mob takes the Fifth,” as he has said. “If you’re innocent, why are you taking the Fifth Amendment?”

So although Trump has the option not to give evidence, the question for him and his political team would be whether they wanted to live with the commentary that would invite from opponents.

So why wouldn’t Trump just cooperate to prevent a subpoena or taking the Fifth?

The president and his legal team stress that they have been. And Trump has said several times how much wants to talk with Mueller, if his lawyers counsel him to do so.

But Trump’s freewheeling speaking style is well known both to his critics and his supporters, including his lawyers. He’s been described as someone who likes to digress, to prevaricate, to exaggerate. And if he were to do that in an interview with Mueller, that could create legal problems.

Mueller has already concluded a number of guilty pleas — including with former national security adviser Mike Flynn, campaign adviser George Papadopoulos — in which people admitted to lying to the FBI.

That doesn’t mean Trump would lie or that if he did lie, he might be indicted (the question about whether the Justice Department could indict a president is disputed) but, as with the 5th Amendment question, the political blowback could be serious.

What do Trump’s lawyers say?

The president’s advisers appear to be split on a Mueller interview. Some of them, and some outside advisers, including Roger Stone, say Trump must not talk with Mueller.

Others, including one of Trump’s newest lawyers, former New York City Mayor Rudy Giuliani, appear to want to keep the door open to an interview. That would enable Trump to placate the special counsel short of a subpoena and also permit the White House to continue touting its cooperation with the investigation. These two camps are now warring in the press.

The don’t-do-an-interview camp may have been the origin of an account of the questions Mueller has told Trump’s lawyers he wants to ask — seeking to illustrate the breadth and detail that Trump would need to cover and the potential pitfalls that could create.

And the do-an-interview camp may have responded on Tuesday with a riposte that made clear Mueller has already dropped the s-bomb — “subpoena” — in his discussions with Trump’s legal team.

The two sides are battling to shape the public discussion about the president’s legal dilemma and grab the attention of the principal himself. Trump’s latest thinking appears to be that he is cold to the idea of an interview and he considers the Justice Department investigation to be nothing but a “witch hunt.”

Could Trump solve his problems by firing Mueller?

The White House says it believes Trump enjoys the privilege to fire Mueller, but that he has no intention of doing so. Trump’s allies in Congress, led by House Speaker Paul Ryan, say they’ve received assurances from the White House that Mueller’s dismissal is not in the offing.

The latest target by Trump and his supporters, however, isn’t Mueller, but the man to whom he reports: Deputy Attorney General Rod Rosenstein.

The president and his allies have been sandblasting the Justice Department for months over what they call “bias” and officials’ abuse of their power, and this week some members of Congress surfaced “articles of impeachment” on which lawmakers could vote to remove Rosenstein.

Trump and his allies complain that Rosenstein and the Justice Department have been slow-walking their requests for documents about the Mueller investigation and other matters, part of what conservatives call a conspiracy to frame Trump.

The president renewed his complaints on Wednesday in a post on Twitter that held open the possibility he might use “the powers granted to the presidency” and “get involved!”

A Rigged System – They don’t want to turn over Documents to Congress. What are they afraid of? Why so much redacting? Why such unequal “justice?” At some point I will have no choice but to use the powers granted to the Presidency and get involved!

Rosenstein says the Justice Department wants to cooperate with members of Congress but within reason. He said on Tuesday that “articles of impeachment” and other such tactics wouldn’t intimidate him.

“There have been people who have been making threats privately and publicly against me for quite some time and I think they should understand by now the Department of Justice is not going to be extorted,” he said.