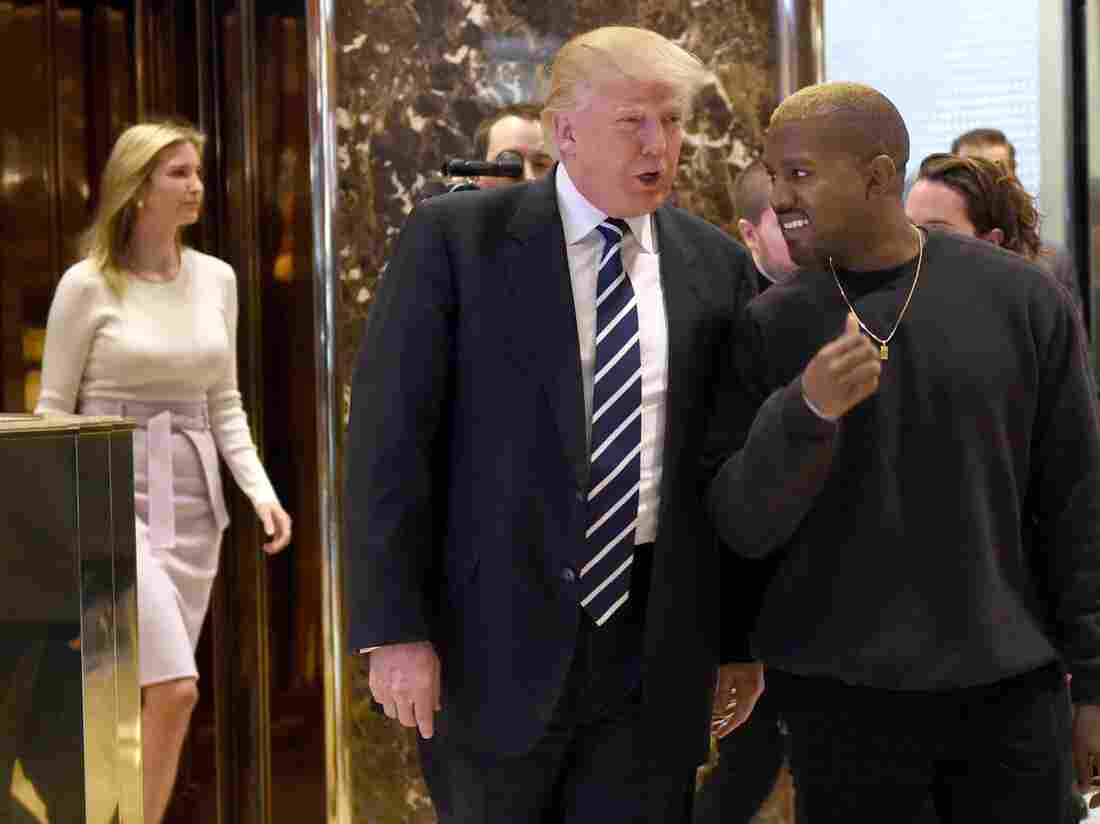 Singer Kanye West and President-elect Donald Trump talk as they arrive to talk to the press after their meetings at Trump Tower December 13, 2016 in New York. Timothy A. Clary/AFP/Getty Images hide caption 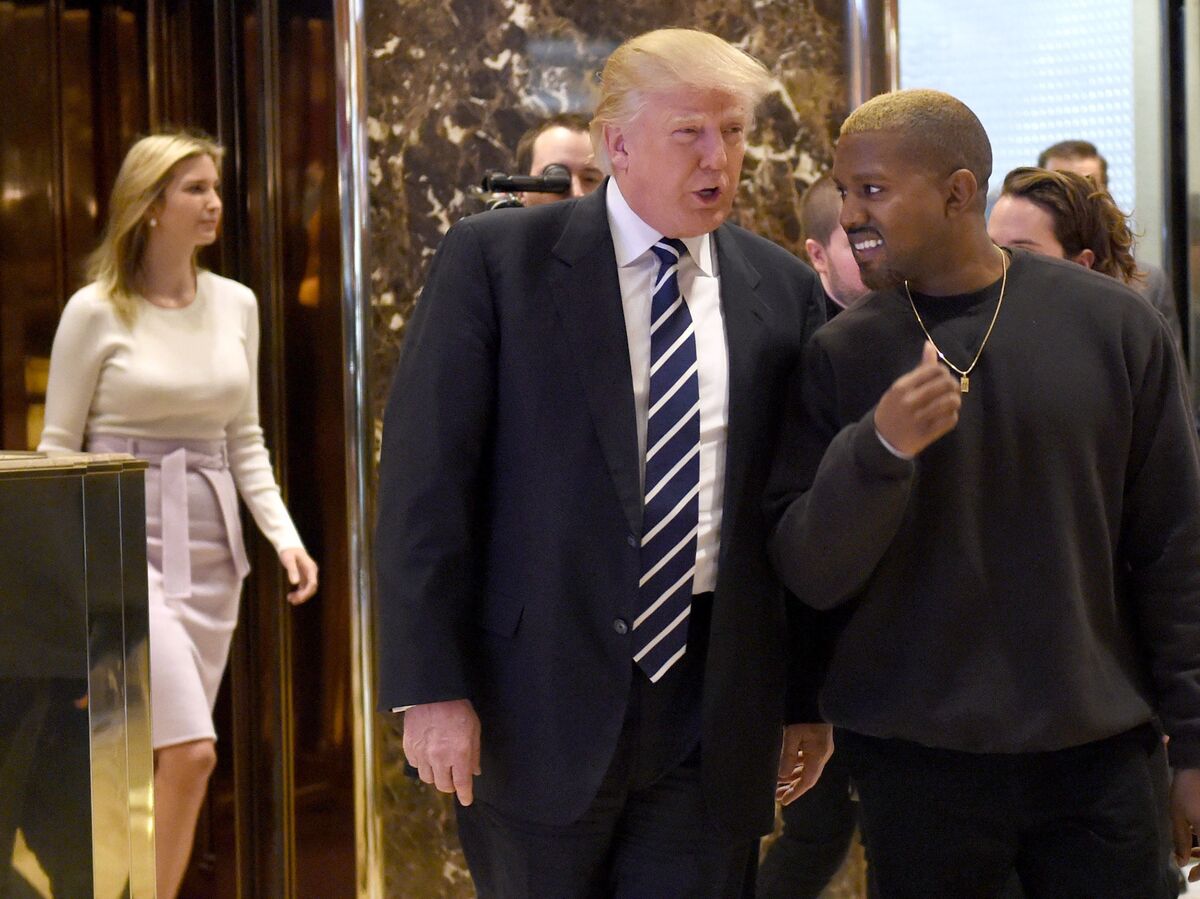 Singer Kanye West and President-elect Donald Trump talk as they arrive to talk to the press after their meetings at Trump Tower December 13, 2016 in New York.

It was a week into the bizarre, Red Pill Kanye West tour that the whole affair seemed to reach its zenith — or its nadir, depending on where you’re sitting. Kanye completed his transmogrification into a sentient Reddit thread when he appeared on TMZ this week, parroting well-worn talking points about black-on-black crime and calling slavery in America “a choice.” Van Lathan of TMZ was not having it.

Kanye West — rapper, music producer, clothing designer, provocateur of debatable guile — emerged from a period of relative quietude only to spend the last two weeks thrusting himself into our exhausting culture wars. He shouted out the alt-right-adjacent commentator Candace Owens. He reiterated his affection for President Trump, who returned the love. He snapped a red-hat selfie. And for good measure, he wrote a verse that says that that black people were still on “the Democratic plantation.” Kanye said that he was “free thinking,” and that he had slipped the bonds of black political conventions.

The reactions to Kanye West’s noisy rightward lurch perfectly illustrated some important, particular dynamics about black voting behavior — why a country with so many black conservatives continues to have so few black Republicans.

When mainstream conservatives rallied around Kanye, they saw the possibility of a broader political shift: Maybe Kanye could make the GOP cool enough to upend black allegiance to the rival party. They were operating under the presumption that the arithmetic for black voting works the way it does for white voters: Conservative-leaning people vote for the GOP; liberal-leaning people vote for Democrats. Conservative publications hyped a lonely Reuters poll that showed that President Trump’s approval rating among black men had jumped to a slightly-less-abysmal number over the week of Kanye’s MAGA-lite paroxysms. They were making a dent!

But black folks seemed to largely respond to Ye with eyerolls, (or the way Van Lathan did in the TMZ video above.) Is this the same dude who went off script after Hurricane Katrina to say that George W. Bush didn’t care about black people? Was this some kind of elaborate troll to drum up publicity for a new album? Has Kanye lost his damn mind?

Ismail White, a political scientist at George Washington University, said that the response from black people to Kanye was to be expected: President Trump remains less popular with black people than with any other racial group, and no other group leans as heavily Democratic in national elections as black folks. But there’s long been debate about why those inclinations have remained so strong.

A common explanation has been the notion of “linked fate” — the belief among black folks that their individual prospects are tied to a collective well-being. But White said that linked fate can’t really explain how the powerful norm for black people to cast votes for Democrats has maintained itself over the last half-century; norms, after all, have to be policed.

What White and and three other researchers found in a recent study is that social pressure from other black people is how this Democratic norm gets policed. They found that the expectations around this norm were so powerful that simply having a black questioner ask a black respondent about their voting preferences made that respondent more likely to say they were voting for a Democratic candidate.

Chryl Laird, one of the study’s authors, said that this is how everyone votes. We like to think of our voting choices as purely rational, but we take cues from the people around us, especially when we don’t know much about a candidate or an issue. Laird said that social influence and pressure partly explain why most white evangelical voters in Alabama supported Roy Moore last fall, even after he was accused of sexual misconduct involving minors.

But she said these social effects are more intense for black people because of their history in the United States. “Even going back to slavery, during planned slave revolts, black people would find ways to socially sanction people who informed of their plans,” she said. “During Reconstruction, we see instances of people who were planning to vote for the Democratic Party out of self-interest — maybe they were bribed by a white person — and those people were ostracized.”

Enforcing that solidarity has historically been a matter of life or death. But entrenched segregation today keeps black people of different ideological stripes in close social and spatial proximity to each other. It’s easier to enforce collective norms, to feel affirmation or sanction from black folks, when you have black neighbors, go to black schools and mosques and churches and hair salons, when you carry around around that social history and that sense of shared stakes. Black people are surrounded by black Democrats, so they vote like black Democrats.

And when they don’t, they get checked. Laird pointed to an example of this from the Kanye mess: John Legend, Kanye’s friend and sometimes collaborator, sent him a text message nudging him to reconsider — or just consider at all — what he was saying. (Kanye, being Kanye, posted a screenshot of that exchange to Twitter.)

That nudge from John Legend, Laird says — or Chance the Rapper publicly distancing himself from Kanye’s comments — is what enforcing those norms looks like in real time.

So Kanye isn’t wrong when he says there is a lot of social pressure for black people to vote Democratic. But how those pressures extend to Kanye is a different question. Laird said that the black people who are most likely to cast ballots for Republicans tend to have more attenuated social connections to black communities — like hypothetically, a famous entertainer who lives in an ultra-wealthy town with a 3 percent black population.

Kanye has cast himself as an iconoclast, brave enough to flout prevailing expectations for black people. But it makes sense to ask how much his current ideological trajectory owes to his own, changing personal arithmetic around social sanction and social rewards. He’s not in Chicago anymore. And Kanye, ever the solipsist, could just be looking for affirmation from the people in his current social universe who can give it to him. (That math is different for John Legend and Chance, who are more closely tied to black communities through their activism.)

So where does that leave black conservatives more broadly? It’s certainly not hard to find them: the capitalists who think supporting black banks can offset the effects of racism on black wealth; the social conservatives who see absent fathers as exacerbating black marginalization. There are folks who believe that black uplift lies in sufficient guile and thrift, and folks believe that gun ownership is necessary to fend off white supremacy. There are powerful impulses coursing through institutions as disparate as black sororities and fraternities and the Nation of Islam.

To put this another way: Those black conservatives differ from mainstream conservatism because they aren’t organized around white interests. Black conservatives get black people, whereas white conservatives who applaud Kanye for “escaping the Democrat plantation” are so removed from black folks that they think it makes sense to invoke the language of slavery to describe the overwhelming majority of black voters.

Whiteness, demographically and ideologically, has been so central to the mainstream conservative project that bringing black conservatives into the fold and into the Republican Party — which derives almost all of its electoral support from white conservatives — wouldn’t just change its racial demographics. It would effectively change the party’s ideological composition, as well.

Leah Wright Rigeur, a Harvard political scientist and the author of the Loneliness Of The Black Republican, said that rank-and-file black Republicans often express frustration with their party’s messaging and policies toward black people. They are often ignored by fellow Republicans.

But they’re also viewed with suspicion by other black folks. “There’s research that shows that black folks hold much more negative opinions about black Republicans than they are of white Republicans with the same views, because they feel like it’s a betrayal,” Rigeur said. And because the handful of black Republicans with higher profiles — Herman Cain, Allen West, Ben Carson, Mia Love— don’t talk to or about other black people with any particular warmth or facility, it adds to the sense that their primary role is to be the Republican party’s Black Friend.

And so the very things that endear figures like Kanye to Republicans — his willingness to troll black people, to proclaim concerns about race obsolete, to embrace white conservatives — are the very same things that ignite black people’s distrust of figures like Kanye. And it’s the thing that both Kanye and Republicans who see him as a potential evangelist to black folks keep missing: you can’t break bread if you’re not invited to the cookout.