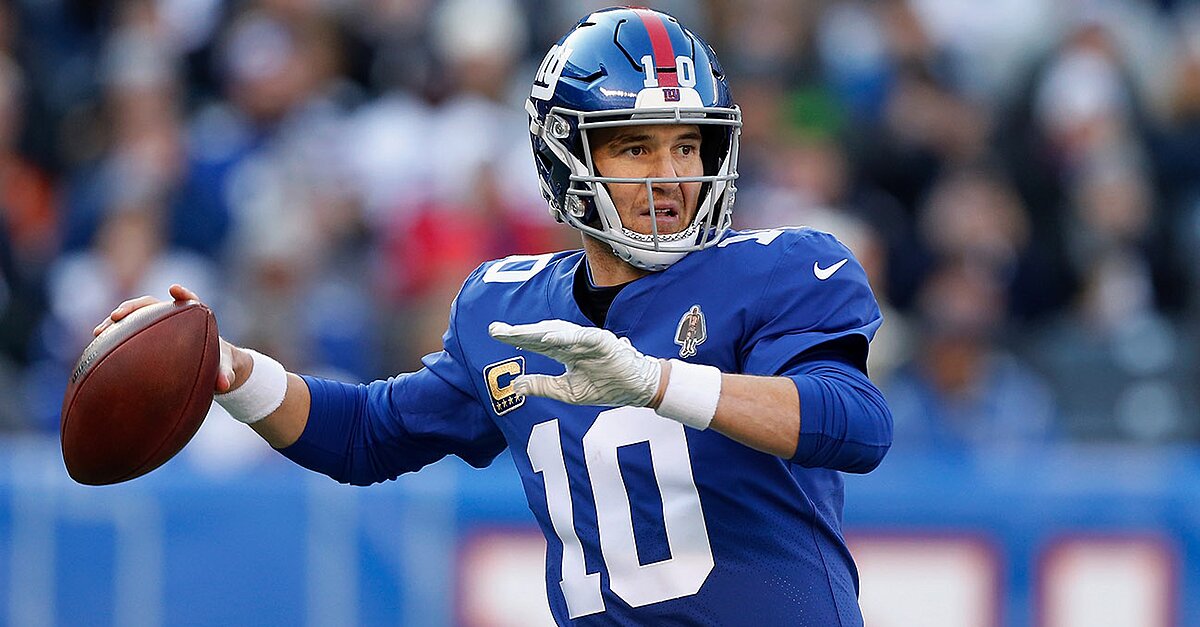 On the Monday Morning NFL Podcast, Andy Benoit and Gary Gramling looked at the Giants’ strange sort-of rebuild and what Eli Manning is and was…

GARY: We’re going to talk about Eli for just a couple minutes here because he’s such a fascinating case. First I’m going to rewind to this time last year. We were both bullish on the Giants. We liked what they had built as far as skill positions go, but they were bad in the trenches. Bad offensive line, no pass rush. Eli did not hold up well behind that line. He had a decent second half of the year and—if you squint—you could be optimistic. But to me he seemed a little shell-shocked last year.

ANDY: You always have to factor his bizarre facial comportment. He seems shell-shocked because if something goes wrong, he looks like a shell-shocked man. We need to establish for listeners at least what we think he is. I think he is a very serviceable, high-level game managing type of quarterback. I mean that in a positive way, I think he can control the game at the line of scrimmage. What he’s not good at anymore—and he’s never been great at it, but has been explicitly bad at lately—is when there are bodies around him in the pocket. That’s a problem in the NFL. You have to be able to function when that happens. It’s not a toughness issue. He not only will stand tall in the pocket, he knows how to protect himself and take hits safely, I just think it’s a decision-making issue; he can be a bit reckless. When the offense around him isn’t functioning well, he has to lift them up mentally and get them in the right plays because he can’t be expected to lift them up after the snap.

GARY: My biggest criticism of his play last year was the ball was getting out too early. He wasn’t giving a chance for anything to develop downfield and I think that’s what was most discouraging about the offense last year. If the offensive line is bad, that’s the way it goes sometimes. He didn’t give them a chance to deliver these big plays.

ANDY: That’s what happens when you don’t trust your offensive line. The value of a good offensive line is two-fold. One, you get the protection and your plays function well and two, you get the insurance policy where the people executing the plays believe they will function well and believe they will have time to unfold and Manning will move in the pocket. If you’re not believing in your offensive line, you’re not getting that second part. That impacts quarterbacks, playcallers, it might even impact wide receivers in some cases. It’s why the Kevin Zeitler trade was a valuable move for the Giants. You don’t have to be great in the NFL along the offensive line, especially when you have Eli Manning at QB, but you have to be good enough because you’ve got to give him a clean pocket and let everybody believe the offense can function. That doesn’t happen if people think you have to hide your O-line.

GARY: We look back at Eli’s career, there’s a revisionist history aspect. That because he won two Super Bowls, at some point he was a superstar quarterback, he was on par with a Rivers or a Roethlisberger. That wasn’t what he was. If you take away the Super Bowl factor that inflates his legacy, this is probably where you thought 38-year old Eli would be.

ANDY: When I first got to NFL Films, I was young and said, “Oh, Manning’s a superstar!” Someone in that room—who may not appreciate me saying who it was—said the Giants basically played around Eli in that Super Bowl. They’d just won it a year-and-a-half ago. The Giants won with their defense, they played around him, it was a slugfest. He made two or three big plays down the stretch that made it look like he was great, but the game lasts 70 plays. That was the view of Manning within the NFL. I had a head coach say to me last year, “It’s not even a discussion” of where Manning ranks among the Roethlisberger/Rivers/Manning trio. He’s not a distant third, but he’s a firm third. The league doesn’t see Super Bowl rings in the same way that outsiders do. They’re not watching this through the Disney movie prism where at the end of the day, the guy dug in and carried them to the Super Bowl. They realize there’s a lot more than just a quarterback that goes into the Super Bowl. Most people in the NFL would say it’s important Eli has the rings, but that doesn’t define him or make him better than Philip Rivers, who is clearly the more effective all-around quarterback when you look at the scope of their careers. Roethlisberger is in the Rivers class.