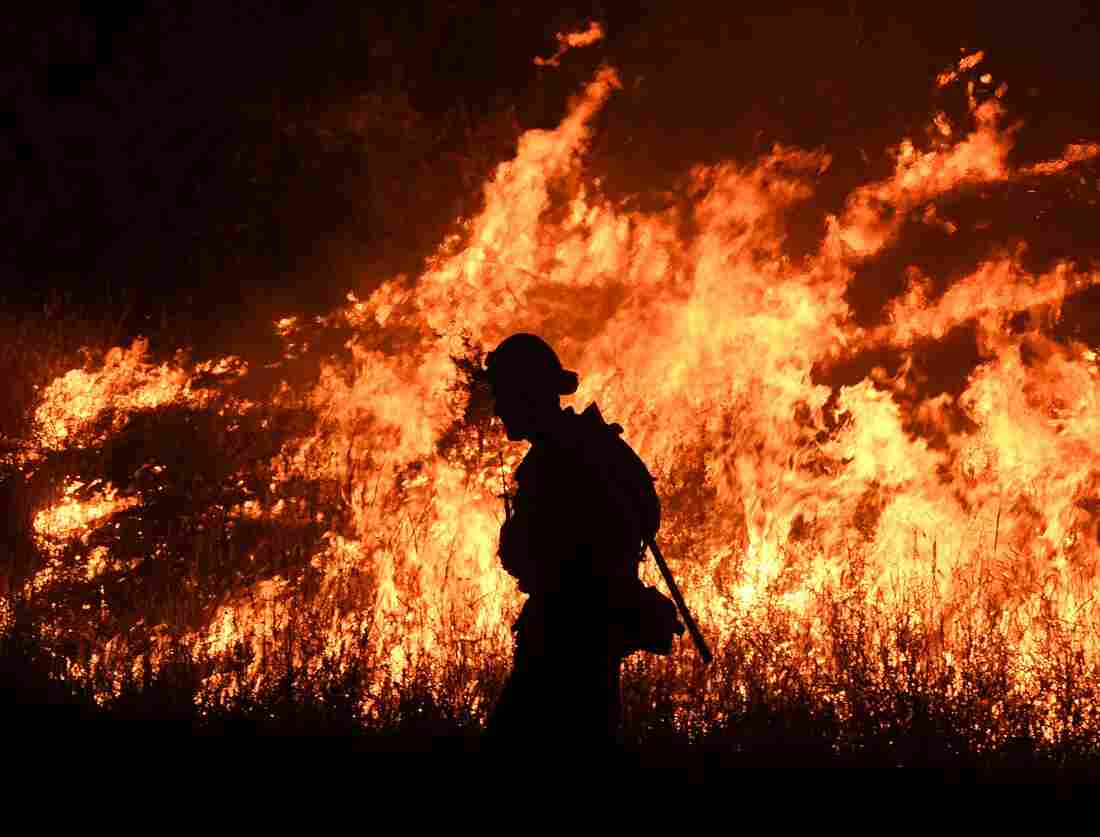 Firefighters conduct a controlled burn to defend houses against flames from the Ranch Fire, as it continues to spread toward the town of Upper Lake, Calif., last week. Mark Ralston/AFP/Getty Images hide caption 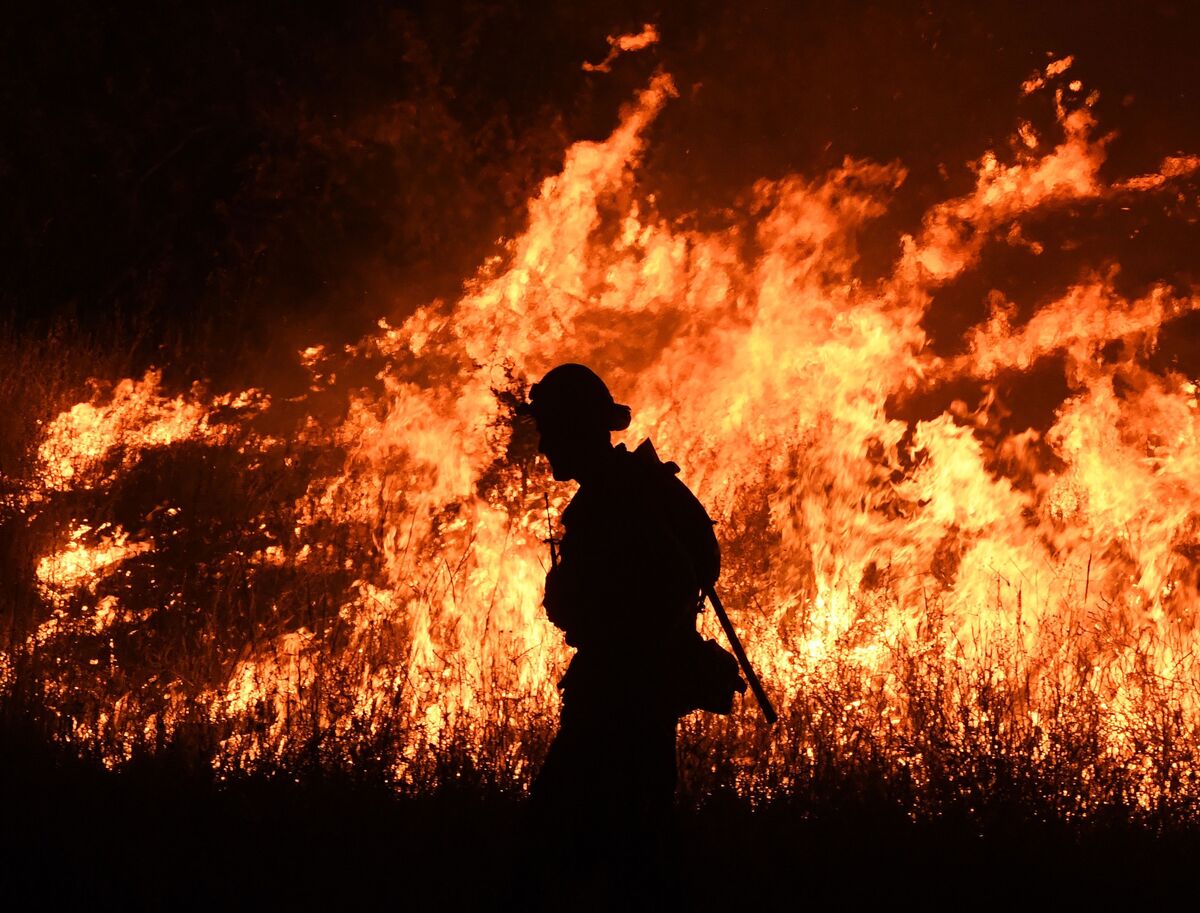 Firefighters conduct a controlled burn to defend houses against flames from the Ranch Fire, as it continues to spread toward the town of Upper Lake, Calif., last week.

Resources are wearing thin as wildfires burn in 11 western states. Firefighters are getting an international assist from Australia and New Zealand. Teams from the two countries spent the weekend in Idaho training before being deployed to the West Coast to battle flames in California, Oregon and Washington.

Before they hit the fire lines, the 140-member team got an orientation and some last-minute training at the National Interagency Fire Center in Boise.

Across the western U.S., fires are burning on roughly 1.6 million acres. The National Preparedness Level is at five — the highest the index goes. That means there’s a high level of wildfire activity across the country and that many resources have been committed to fight fires. Level 5 also lets fire managers call in help from the military and abroad. The last time firefighters were brought in from Australia and New Zealand was 2015.

In a field at the complex near the edge of town, training specialist Matt Skudlarek leads a practice involving personal fire shelters. Deploying one is a decision of absolute last resort when a fire is closing in.

Skudlarek outlines a scenario where flames are bearing down on a group from the north. He points south, down the field, to a couple of cardboard boxes and says that’s a good area to deploy the shelters. The drill begins and the visiting firefighters bolt down the field.

“Let’s go for it,” Skudlarek calls out. “Drop those packs!”

The firefighters drop to the ground and wrap themselves in what looks like a cross between a bright orange tarp and a sleeping bag.

For most, it’s the first time using a shelter. While standard issue here, they’re uncommon in Australia and New Zealand. With only 25 shelters to go around, the group has to meticulously refold and repack them before the next bunch can practice.

Peter McKechnie is watching the group perform the fire shelter drills. He’s the liaison between the two South Pacific nations and the U.S. He says the personnel that’ve traveled half way around the world aren’t the rank and file.

The firefighting partnership between Australia, the U.S., and New Zealand dates back more than 50 years. McKechnie says ties are strong between the three nations and that the U.S. has answered the other countries’ calls for assistance in the past. 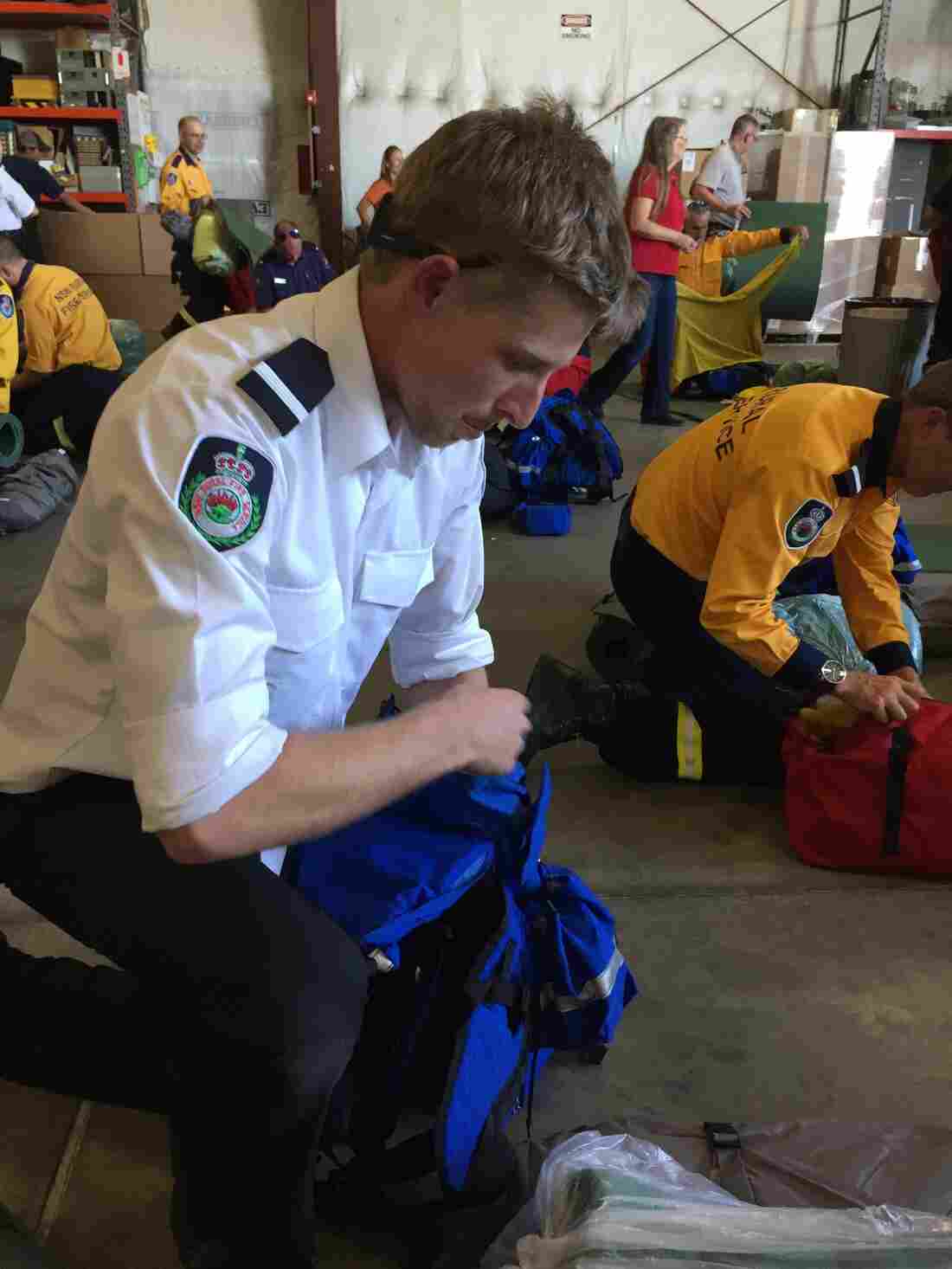 Dan McAndrew is in the U.S. from Australia’s New South Wales Rural Fire Service. Among the items he’s stuffing his pack with are camping gear, a sleeping bag and a uniform. “We’ll be wearing the local uniforms here so we fit in,” he says. This isn’t his first time abroad to fight wildfires. He was deployed to Canada last year. Matt Guilhem/Boise State Public Radio hide caption 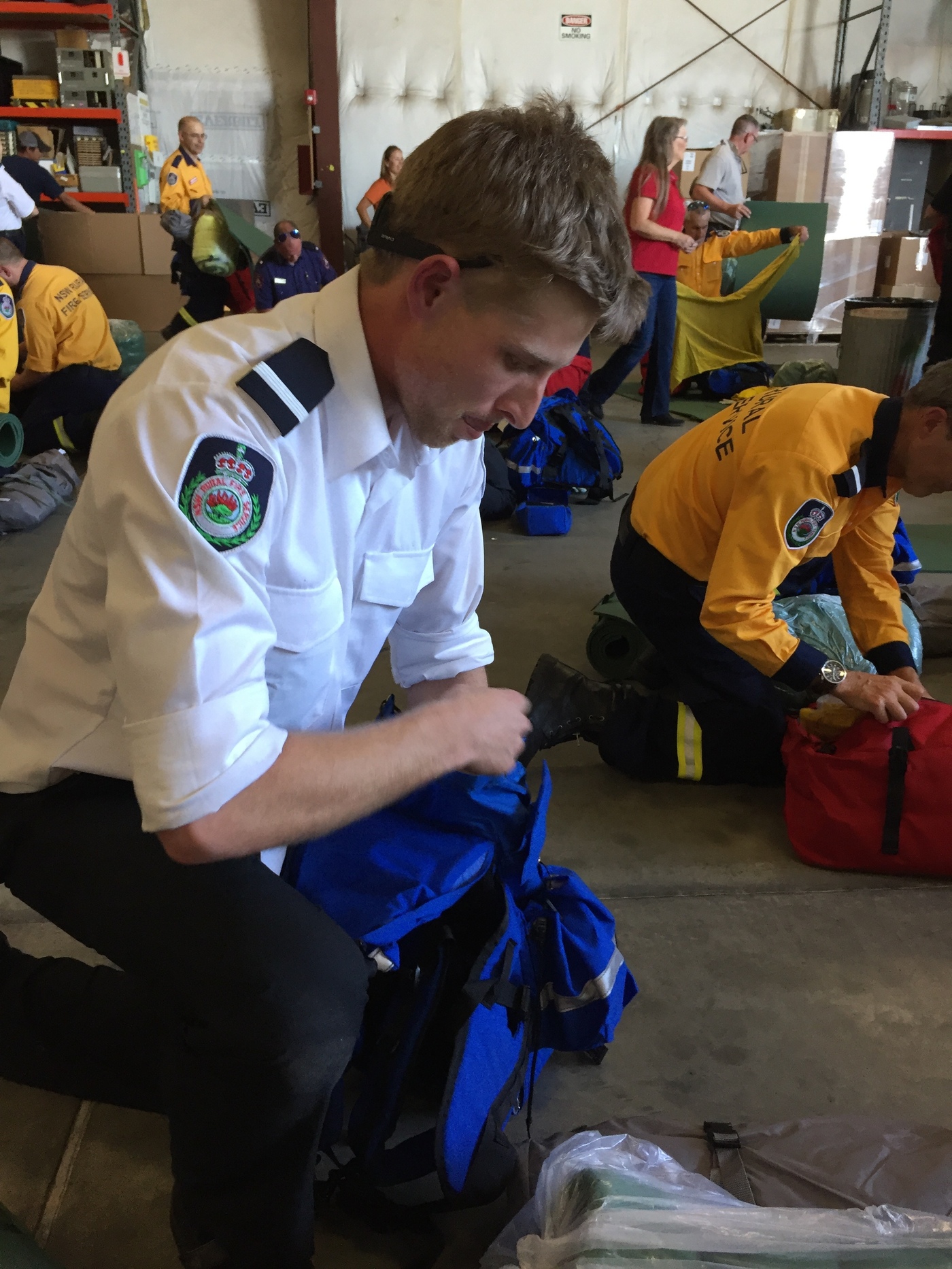 Dan McAndrew is in the U.S. from Australia’s New South Wales Rural Fire Service. Among the items he’s stuffing his pack with are camping gear, a sleeping bag and a uniform. “We’ll be wearing the local uniforms here so we fit in,” he says. This isn’t his first time abroad to fight wildfires. He was deployed to Canada last year.

In a big warehouse across the base, another group of firefighters collect gear in what looks like a buffet line of equipment.

Taking in the scene is Chris Eagle, a liaison officer from the Melbourne area. He says fighting fires Down Under is similar to here, but there are some differences — like terminology.

“We were laughing because if we ask for a tanker at home, we get a truck with wheels on it,” Eagle says with a smile. “If you ask for a tanker in America, you’ll get an airplane to drop water on top of you. So it’s things like that that if you don’t know those little, little things, it gets a bit embarrassing when you get the wrong thing you didn’t think were coming.”

“Ready to get out there”

Nearby, rolling up an olive drab mat into his gear, is Dan McAndrew, who’s going to be a strike team leader — overseeing a group of U.S. firefighters.

“I want to get into it,” McAndrew says with enthusiasm. “Ready to get out there and do what we can — help local guys, give them a bit of a break. They’ve been goin’ for quite some weeks now.”

Whether he goes to California or Oregon, he’ll be relieving people who need it. Crouched by McAndrew, stuffing things into her pack, is Tamsyne Harlen from the small Australian town of Bega.

An aviation expert, it’s her first time fighting fires in the U.S.

“At this stage, there’s a lot of what are we doing and where are we going,” she says. “I’m looking forward to just getting out there and really getting the job done and seeing how we can help you guys.”

She has questions, but she’s animated by the same eagerness as the rest of the group to ship out. One thing she’s well aware of is the danger, but she doesn’t focus on that because it won’t help her do the job.

She falls back on her decade of training from back home, and her crash course this weekend in Idaho.