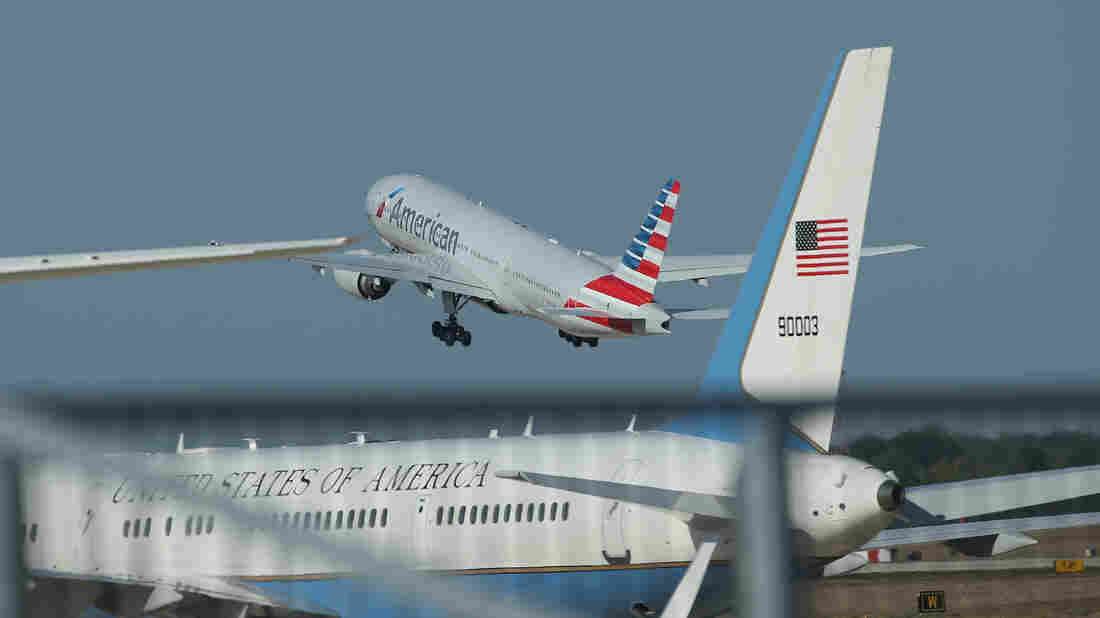 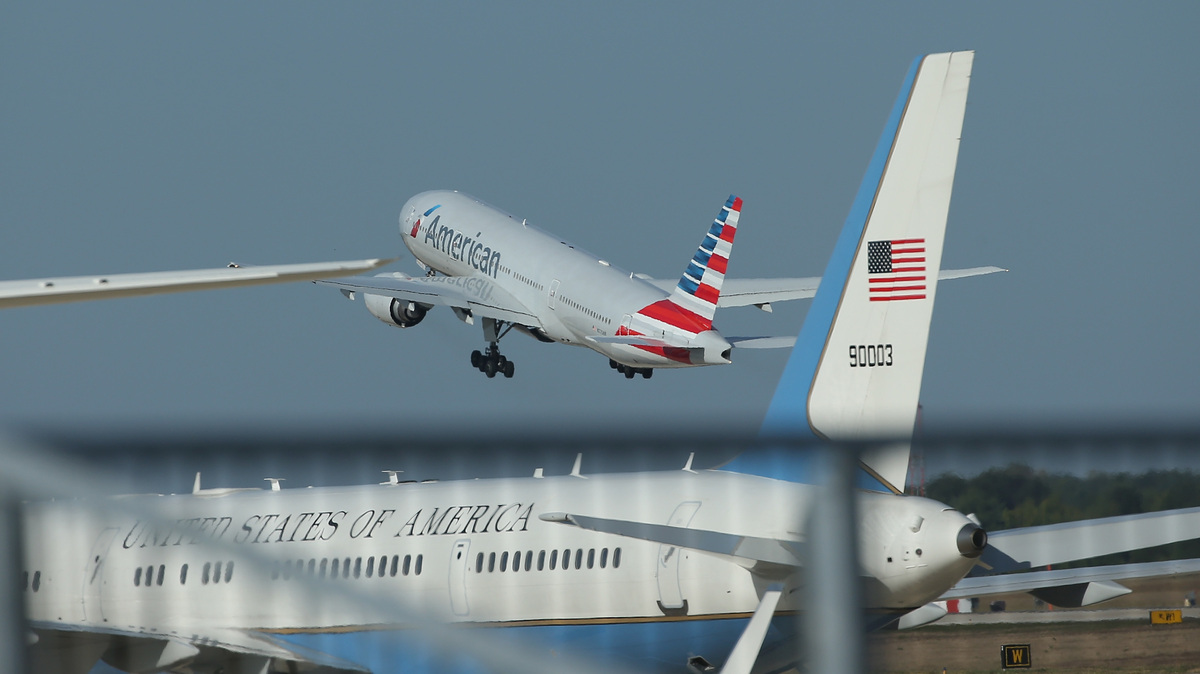 An American Airlines plane departs Joint Base Andrews in Maryland in 2015.

Seated in the Oval Office on Wednesday, flanked by his vice president and secretary of homeland security, President Trump walked back an administration practice that has separated more than 2,300 children from their parents along the border.

Earlier in the day, several major U.S. airlines had made their positions on the most controversial facet of Trump’s “zero-tolerance” policy abundantly clear: “We want no part of it.”

That’s how United CEO Oscar Munoz concluded his statement — one of several released Wednesday by major airlines asking the Department of Homeland Security to refrain from using their flights to transport migrant children.

American Airlines opened the volley in the morning, saying the company’s mission does not align with the Trump administration’s recent practices because “we bring families together, not apart.”

“We have no desire to be associated with separating families, or worse, to profit from it,” the American statement said in part. “We have every expectation the government will comply with our request and we thank them for doing so.”

The company noted that it has contracts to offer travel to the federal government, but said it does not know how exactly how officials have used that travel to this point.

“We have no knowledge” of whether authorities have flown migrant children on their planes, the statement said, “but we would be extremely disappointed to learn that is the case.”

United and Frontier airlines released similar statements in quick succession, professing to have no knowledge or evidence regarding their flights’ uses — but seeking to head off the possibility of their being used for such transport in the future.

“Frontier prides itself on being a family airline, and we will not knowingly allow our flights to be used to transport migrant children away from their families,” the company said in its own statement posted to Twitter.

Frontier prides itself on being a family airline and we will not knowingly allow our flights to be used to transport migrant children away from their families. At this time, we are not aware if Frontier has been used for this purpose.

The statements follow a furor that erupted around a story posted last week by a flight attendant, who recounted her coworker’s apparent experiences serving 16 migrant children on an overnight flight.

“Children! Thirty-two scared eyes looking straight forward dazed. We try to speak, yet none speak English,” the post reads. “During the beverage service, one of the crew comes to me in tears. They can’t face these children that have been ripped from their families with a smile.”

Questions have circulated about the story’s veracity, which NPR has not independently confirmed — though a spokesperson for the Association of Flight Attendants-CWA union told The Arizona Republic that the account was indeed authentic.

An account from an attendant aboard a flight transferring 16 unaccompanied children who were taken from their parents at the border. If you can read this without crying or feeling sick, unfollow me. pic.twitter.com/Z487f7I14s

One thing is certain: The outrage the post inspired on social media was authentic.

And the Republic reports that, though the story doesn’t name the airline used, details suggest it was American Airlines — though the company noted then, as it did again Wednesday, that the government does not disclose its activities on American flights.

“AFA condemns any action to purposefully separate children from their parents,” the flight attendants union said in a statement of its own Wednesday, adding that they “applaud” the moves made by the three airlines.

The Department of Homeland Security, however, pushed back hard against the companies’ decisions.

“It is unfortunate that [the three airlines] no longer want to partner with the brave men and women of DHS to protect the traveling public, combat human trafficking, and to swiftly reunite unaccompanied illegal immigrant children with their families,” department spokesman Tyler Houlton said in a series of tweets Wednesday.

He said the dust-up is born of the fact that “these airlines clearly do not understand our immigration laws.”

“Buckling to a false media narrative only exacerbates the problems at our border and puts more children at risk from traffickers,” he added. “We wish the airlines would instead choose to be part of the solution.”

For 15 years, @DHSgov has worked diligently with America’s airlines to secure aviation and facilitate the travel by air of millions of Americans and visitors and we will continue to do so.

One thing that remains unclear: where this dispute goes from here, now that Trump has signed the executive order ending the practice of family separations, but maintaining a vow “to rigorously enforce our immigration laws.”

Under the terms of the order, authorities instead will detain — and if necessary, house — migrant families together as they await processing. It appears, however, that Trump’s move is likely to run afoul of a court order that prevents the detention of migrant children with their parents for more than 20 days.

Wednesday’s dust-up remains keenly relevant to the fates of the 2,342 children taken from their parents and guardians since early May. And if Trump’s decision does hit a legal snag, as some believe, the dispute may portend still more friction in the future between airlines and the federal government.