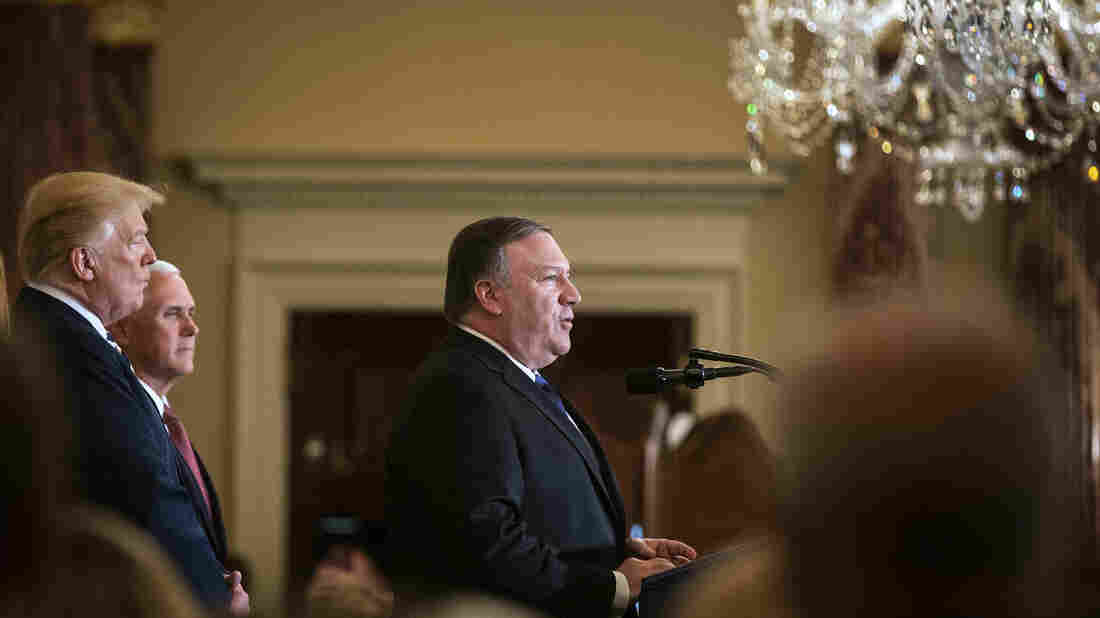 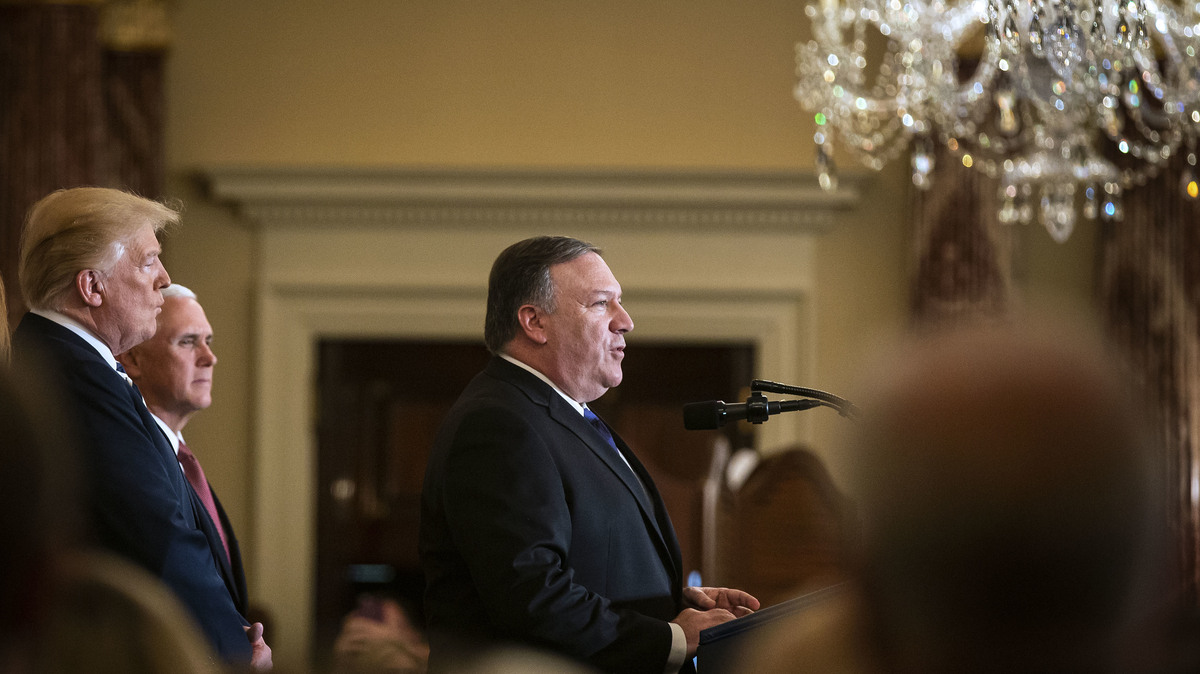 Secretary of State Mike Pompeo speaks during his swearing-in ceremony earlier this month, as President Trump and Vice President Mike Pence look on.

President Trump closed the door on U.S. participation in the Iran nuclear deal Tuesday — but during the very same televised announcement, the president opened a window onto talks about another country’s nuclear program: Secretary of State Mike Pompeo is traveling to North Korea to discuss an expected summit between the two countries.

“He will be there very shortly,” Trump told reporters at the White House. “We have our meetings set. The location is picked. The time and date — everything is picked, and we look forward to having a very great success.”

The comments came just moments after he declared that the U.S. will withdraw from the multilateral agreement, signed in 2015, that aimed to restrict Iran’s nuclear ambitions in exchange for sanctions relief. Trump cited the fact that the deal allows Iran to continue work on its ballistic missile program and to continue funding groups the U.S. has deemed terrorists.

North Korea, which already possesses nuclear weapons, has grabbed headlines with frequent missile tests in recent years, even demonstrating a capacity to hit the mainland U.S. The U.S. and its allies, in turn, have responded with escalating sanctions intended to hobble North Korea’s economy.

But typically bellicose Pyongyang has softened its rhetoric since the start of the year, pledging efforts to negotiate a permanent peace treaty with South Korea and denuclearize the entire Korean Peninsula.

Pompeo made a secret visit to Kim last month, before the then-CIA director had been confirmed as secretary of state. At the time, Trump said “a good relationship was formed” between the two men.

In remarks to the media aboard his plane later Tuesday, Pompeo said the visit last month was “a limited diplomatic discussion” — one that he aims to build upon this time around. In particular, he added that the focus will rest both with building a framework for the likely summit between Trump and Kim and with setting expectations for negotiations.

“We are not going to do this in small increments, where the world is essentially coerced into relieving economic pressure. That won’t lead to the outcome that I know Kim Jong Un wants and I know President Trump is demanding,” Pompeo said.

“We’re hoping to set out that set of conditions that will give them this opportunity to have a historic, big change in the security relationship between North Korea and the United States, which will achieve what the President has tweeted about and talked about: complete, verifiable, irreversible denuclearization.”

Pompeo also noted he would speak to his North Korean counterparts about freeing three U.S. detainees being held in the country: “We have been asking for the release of these detainees for – this administration for 17 months,” he said. “We’ll talk about it again today. I think it’d be a great gesture if they would choose to do so.”

Yet when reporters asked him Tuesday if the three are soon to be freed, Trump made no promises: “We will soon be finding out,” he said. “It would be a great thing if they are.” 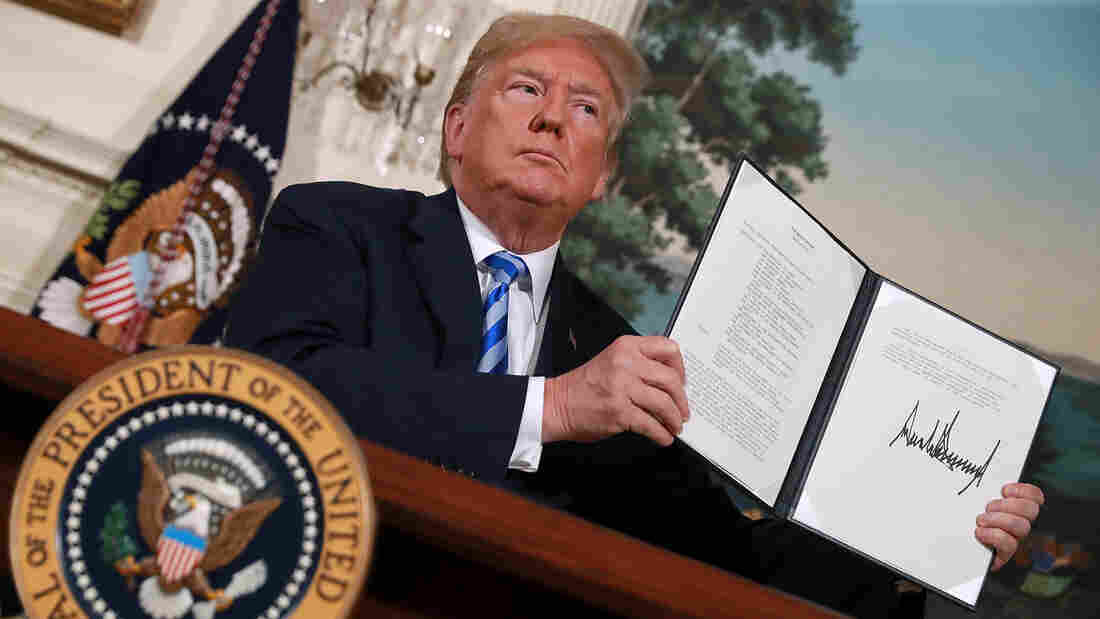 President Trump displays a memorandum Tuesday marking his decision to withdraw the U.S. from the 2015 nuclear deal. Moments later, as he left the Diplomatic Room at the White House, he told reporters that Secretary of State Mike Pompeo was on his way to North Korea. Chip Somodevilla/Getty Images hide caption 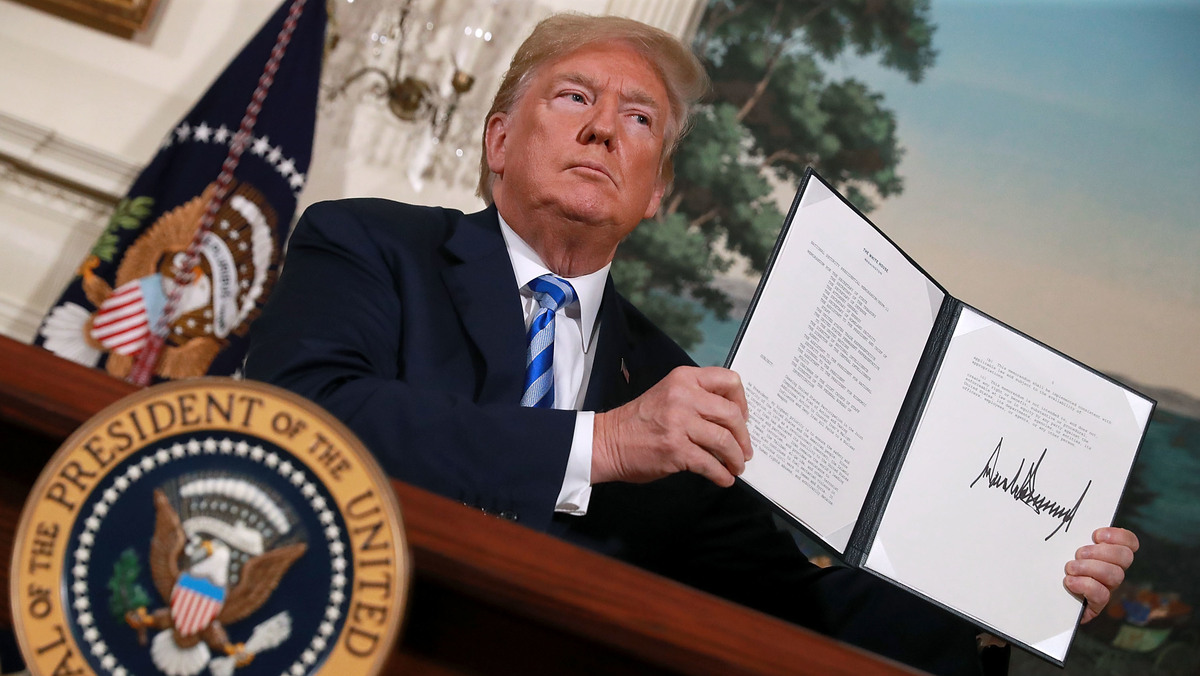 President Trump displays a memorandum Tuesday marking his decision to withdraw the U.S. from the 2015 nuclear deal. Moments later, as he left the Diplomatic Room at the White House, he told reporters that Secretary of State Mike Pompeo was on his way to North Korea.

While Trump was at the White House announcing Pompeo’s visit, Kim was paying a surprise visit of his own to China — his second in just over a month. There, in the port city of Dalian, Kim attended a banquet and took a stroll with Chinese President Xi Jinping while having “an all-around and in-depth exchange of views on China-DPRK relations and major issues of common concern,” according to a statement posted by the Chinese government.

Officials from the two countries focused on deepening their bilateral connections and sorting out the details of dialogue with the U.S.

“China is willing to continue to work with all relevant parties and play an active role in comprehensively advancing the process of peaceful resolution of the peninsula issue through dialogue, and realizing long-term peace and stability in the region,” Xi said in the statement.

On Wednesday, Chinese officials plan to attend still another discussion regarding trade policies with the U.S. and North Korea’s nuclear program — this time in Japan, with Japanese Prime Minister Shinzo Abe and South Korean President Moon Jae-in in Tokyo. Xi’s No. 2, Prime Minister Li Keqiang, is expected to lead the Chinese delegation.

Pompeo’s visit will pertain to the diplomatic maneuverings already underway this week in East Asia. But one of Pompeo’s predecessors, President Clinton’s secretary of state, Madeleine Albright, expressed reservations at the speed with which the Trump administration is moving.

Albright herself visited North Korea in 2000 for a meeting with the current leader’s father, Kim Jong Il, attempting to put an end to the elder Kim’s nuclear aspirations.

“I think diplomatic talks are a good idea. They’re not a gift. They are the way you talk to people that you disagree with,” Albright told NPR’s Rachel Martin last month.

“But it does require preparation,” she added. “And that’s what worries me — is that all of a sudden, if it is a meeting between the two leaders, both of whom have a tendency to kind of say exactly just what the latest thing is on their minds, I do think there needs to be a lot of preparation.”

John Bolton, Trump’s national security adviser, told reporters on a call Tuesday that the administration intends the talks with North Korea to avoid the mistakes they see in the Iran deal, seeking more stringent terms.

“When you’re serious about eliminating the threat of nuclear proliferation, you have to address the aspects that permit the aspiring nuclear state to get there. The Iran deal did not do that,” Bolton said.

“The deal that we hope to reach — and the president’s optimistic we can reach — with North Korea will address all those issues.”