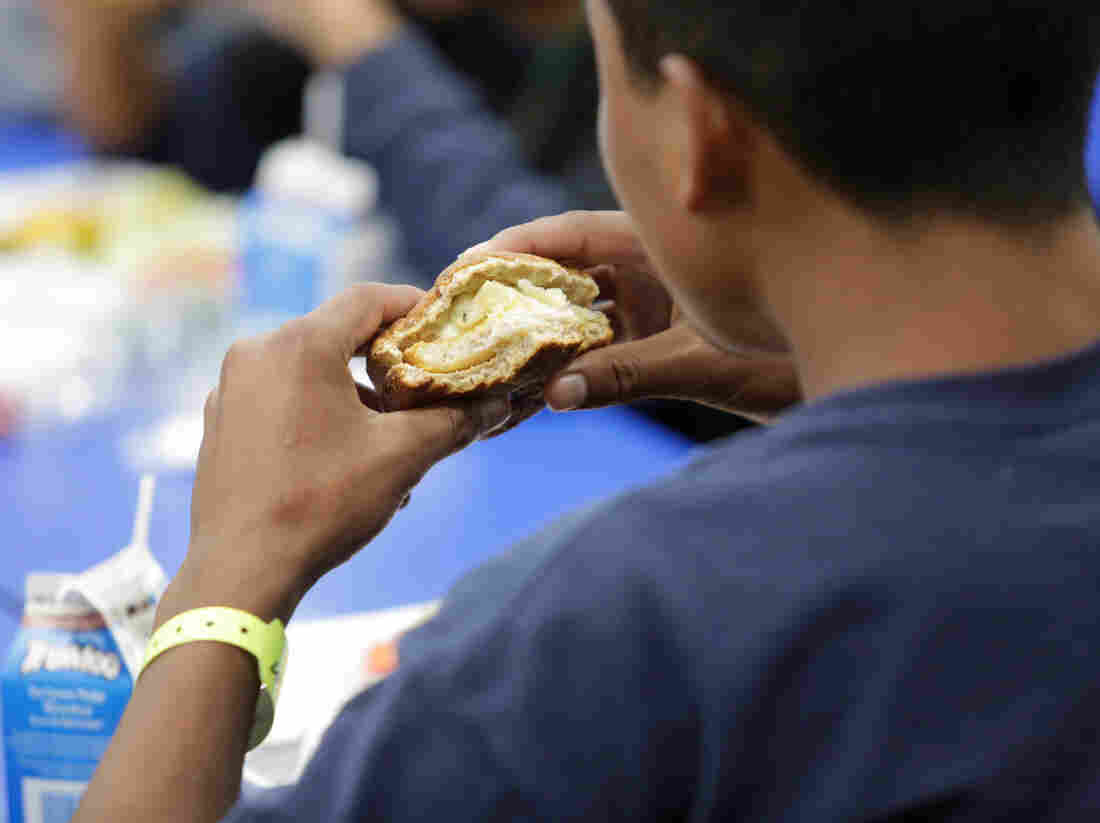 A child eats at an unaccompanied alien children program shelter in Brownsville, Texas, in an undated handout photo that was obtained from the Department of Health and Human Services by Reuters. The government says it separated nearly 2,000 children from adults at the U.S. southern border over the course of six recent weeks. Administration for Children and Families at the U.S. Department of Health and Human Services/Reuters hide caption

Administration for Children and Families at the U.S. Department of Health and Human Services/Reuters 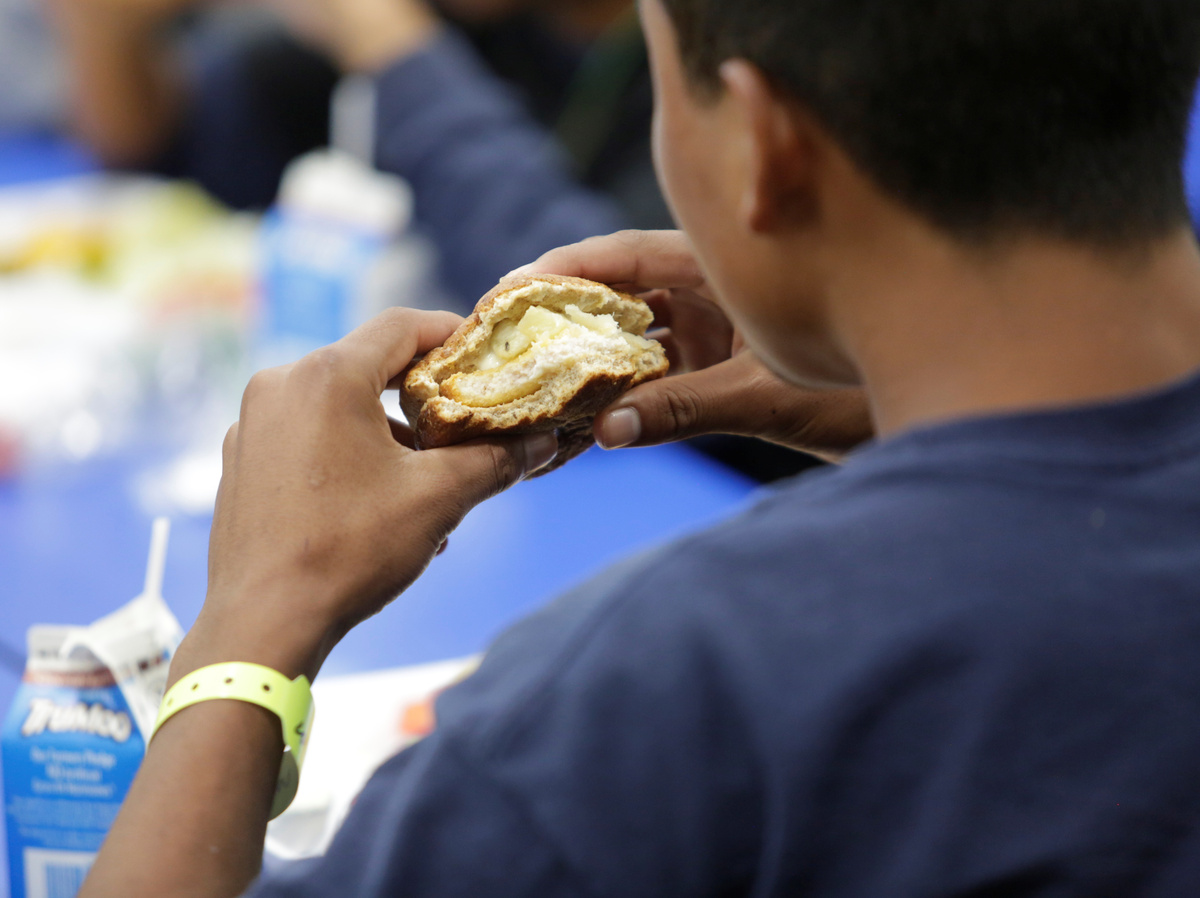 A child eats at an unaccompanied alien children program shelter in Brownsville, Texas, in an undated handout photo that was obtained from the Department of Health and Human Services by Reuters. The government says it separated nearly 2,000 children from adults at the U.S. southern border over the course of six recent weeks.

Administration for Children and Families at the U.S. Department of Health and Human Services/Reuters

Nielsen defended the policy in a series of tweets on Sunday night; earlier in the weekend, her agency said it had separated nearly 2,000 children from adults over the course of six weeks at the U.S. southern border.

This misreporting by Members, press & advocacy groups must stop. It is irresponsible and unproductive. As I have said many times before, if you are seeking asylum for your family, there is no reason to break the law and illegally cross between ports of entry.

The DHS secretary says the separations are warranted in cases where the parents have broken U.S. law by entering the country illegally – and that what her agency is doing is no different from how the government treats parents who break any other laws. But the Trump administration is being accused of handling the cases in a way no other presidency has.

On Sunday, former first lady Laura Bush said, “this zero-tolerance policy is cruel. It is immoral. And it breaks my heart.”

Bush wrote a guest editorial for The Washington Post in which she compared the DHS actions to the U.S. policy of incarcerating Japanese American in camps during World War II.

The DHS policy triggered a lawsuit in February; nearly a year earlier, members of the Trump administration had floated the idea of separating families as a potential deterrent.

A number of high-profile Trump officials have spoken in favor of the policy. Last month, Attorney General Jeff Sessions said, “If you don’t want your child to be separated, then don’t bring them across the border illegally. It’s not our fault that somebody does that.”

The backlash against the tactic grew into a protest march on Sunday, with hundreds of people heading to a tent city in Tornillo, Texas, where children have been detained near El Paso. The Father’s Day march was organized by Rep. Beto O’Rourke, D-Texas, who is challenging Republican Sen. Ted Cruz.

Over all, more than 10,000 children are currently in shelters run by the Office of Refugee Resettlement, which is part of the Department of Health and Human Services.

U.S. Customs and Border Protection has published a guide for families who have been separated after parents or guardians were charged with illegal entry, noting that children who are taken into government custody are transferred to the Office of Refugee Resettlement, “where your child will be held in a temporary child shelter or hosted by a foster family.”

The guide sheet adds, “DHS and HHS can take steps to facilitate reunification with your child(ren).”

Last month, Nielsen told NPR that her agency is merely enforcing existing laws, and that criticism of the zero tolerance policy “is inappropriate and unacceptable.”

That has not stopped what has now become a wave of criticism for the DHS policy of applying the law.

Religious leaders are speaking out against the policy, with Archbishop of Miami Thomas Wenski saying the practice effectively “weaponizes” children, on NPR’s Weekend Edition.

On Tuesday, Franklin Graham, son of Billy Graham and a prominent Trump supporter, told the Christian Broadcasting Network, “It’s disgraceful, and it’s terrible to see families ripped apart and I don’t support that one bit.”

On Sunday night, Nielsen accused others of distorting reality, saying via Twitter, “This misreporting by Members, press & advocacy groups must stop.”

The DHS secretary added, “if you are seeking asylum for your family, there is no reason to break the law and illegally cross between ports of entry.”

First lady Melania Trump also weighed in over the weekend, with her communications director, Stephanie Grisham, sending a statement to CNN which said:

“Mrs. Trump hates to see children separated from their families and hopes both sides of the aisle can finally come together to achieve successful immigration reform,”

Immigration and detention policies came under fire during the Obama administration, which was hit by lawsuits over conditions at facilities, as well as the practice of holding families in detention centers. By embracing a more hard-line policy, the Trump administration has set off speculation that it’s using the threat of separating families as both a deterrent to immigrants and as a political tool in the hopes of reshaping America’s laws.

“You have many people in the Trump administration denying that they’re using this as some sort of political leverage,” NPR’s Scott Detrow reports. “But President Trump is leaning into that pretty hard.”

On Sunday, Trump tweeted, “The Democrats should get together with their Republican counterparts and work something out on Border Security & Safety. Don’t wait until after the election because you are going to lose!”

On Monday, the president added, “Why don’t the Democrats give us the votes to fix the world’s worst immigration laws?”

In Congress, Republicans have introduced a bill to end the practice of separating families — but it would also require Democrats to agree to federal funds for a border wall.

As that argument plays out, others are urging a new attempt to address the root causes of mass migration from people who want to flee troubled or impoverished conditions in countries such as El Salvador to Honduras.

“There’s different elements of the government that don’t understand what’s really going on. Kids are being separated from their parents. In the last two months, there’s been about 2,000. The previous about year, it was almost 700. And 100 of those kids were under the age of 4.”

“This is just absolutely unacceptable. Taking kids from their mothers is not preventing terrorists or drugs from coming into this country. And so, why we would even think that this is a tool that is needed to defend our borders is insane to me.”