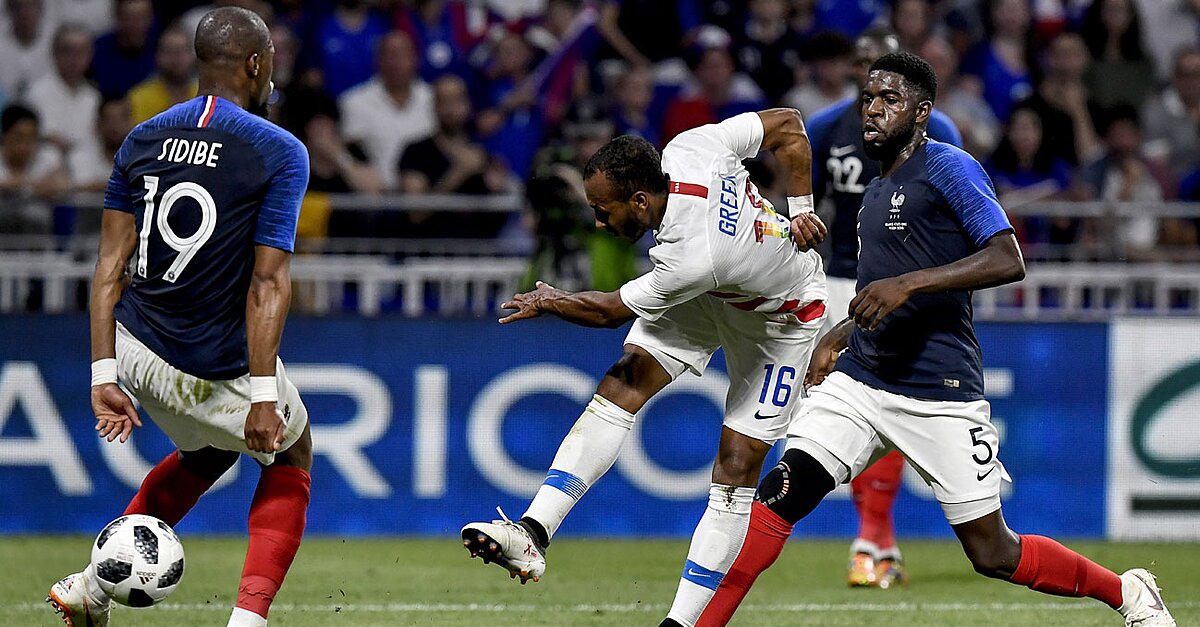 The U.S. men’s national team’s two-week camp culminated in the toughest of its three friendlies, with the most unlikely result of them all.

After beating Bolivia at home and falling at Ireland, the youthful U.S. held World Cup contender France to a 1-1 draw in Lyon in Les Bleus send-off before departing for Russia.

Julian Green’s goal right before halftime, and completely against the run of play, gave the U.S. a stunning lead that it held until the 78th minute, when Kylian Mbappe pulled France even off a cross from Benjamin Pavard. France pressured the U.S. throughout, but a staunch defensive effort kept Les Bleus at bay for the majority of the night.

France didn’t take long to enforce its will on the match, and the hosts nearly scored five minutes in. The U.S. couldn’t play cleanly out of the back, which gifted Paul Pogba a chance from distance. The Manchester United star put his 20-year blast off the right post, though, letting the Americans off with just the warning.

Pogba played provider three minutes later, lofting a perfect ball forward for Olivier Giroud. The Chelsea forward was under pressure from Cameron Carter-Vickers, and he claimed he was taken down and demanded a penalty, but no call was given.

A minute later, Giroud was on the spot again, getting his head to a free kick from the left and snapping it down at the ground, where it bounced into the waiting arms of goalkeeper Zack Steffen.

Antoine Griemzann then fired another warning shot in the 21st minute, whizzing a deflected chance by the goalmouth after receiving a pass from Mbappe on the left channel.

France kept up the pressure. Five minutes later, Benjamin Mendy got in behind Shaq Moore on the left and sent in a cross for Mbappe, which was redirected just wide of the far post.

Pogba ripped another shot on target in the 33rd minute, cutting back on the tracking-back Green and firing away with this left, though Steffen had it covered and made the save.

Griezmann then came close again in the 39th, with ample time and space to line up a left-footed blast from 20 yards that whizzed inches wide of the right post and a diving Steffen.

Just as halftime was approaching, the U.S. struck against the run of play. Bobby Wood sprung Shaq Moore forward on the right, and the fullback sent in a rather innocuous cross. Djibril Sidibe’s poor first touch allowed Green the chance to pounce, though, and the U.S. forward whipped in a first-time chance by the near post that beat Hugo Lloris and gave the Americans a shocking lead.

The U.S. thought it had an even more shocking second three minutes into the second half, when Wood turned in a Moore cross at the near post. The Hamburg forward was clearly offside, though, with the assistant referee’s flag negating the finish.

A scary moment occurred in the 56th minute off a France corner kick. Matt Miazga and Giroud both went up to play the ball and collided with full force, head-to-head. Both went down to the field and were left bloodied after the collision, and both immediately exited the match.

Mbappe came inches from equalizing for France off a free kick won by Lucas Hernandez after a Moore foul. Mbappe curled the chance from an accute left-sided angle just by the far post, keeping things at 1-0.

Mbappe did get his equalizer in the 78th minute. Nabil Fekir, the focus of transfer rumors, had come on for Griezmann and sprayed the ball wide right to Benjamin Pavard. The Stuttgart fullback whipped in a cross for Mbappe, who redirected it home to make it 1-1.

Fekir nearly pulled France in front moments later off a free kick, but Steffen made a tremendous diving save to his right to deny the Lyon star playing at his home arena.

Here were the lineups for both sides:

Here were the rosters both teams: