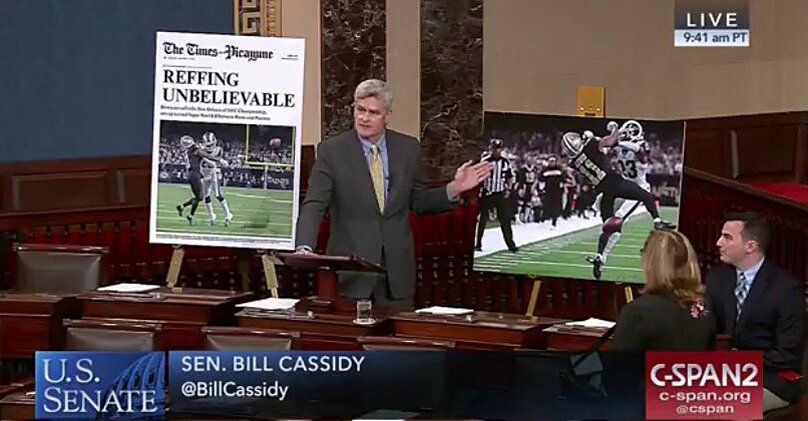 Cassidy: “The state of Louisiana is outraged because of what happened in the Superdome last Sunday.

Saints fans throughout Louisiana haven’t been willing to forgive and forget regarding the blown pass interference in the NFC Championship on Jan. 20. Fans plan on boycotting the Super Bowl, filing petitions and threaten to take legal action after the Rams advanced to Super Bowl LIII. On Friday, the Louisianan’s protests spilled onto the floor of the United States Senate.

Louisiana Senator Bill Cassidy briefly discussed the ongoing government shutdown on the Senate floor on Friday afternoon and called for bipartisanship before dovetailing to a different topic altogether.

“I want to address one other issue that is particularly serious to folks in Louisiana,” Cassidy said. “The state of Louisiana is outraged because of what happened in the Superdome last Sunday… My colleague in the House of Representatives is calling for NFL Commissioner Roger Goodell to testify before Congress on the travesty that occurred five days ago.”

“Football is more than a game, it’s part of our culture,” the senior Senator said to close his presentation. “I would say the NFL has the responsibility to the millions of fans across the country to ensure the integrity of the game.