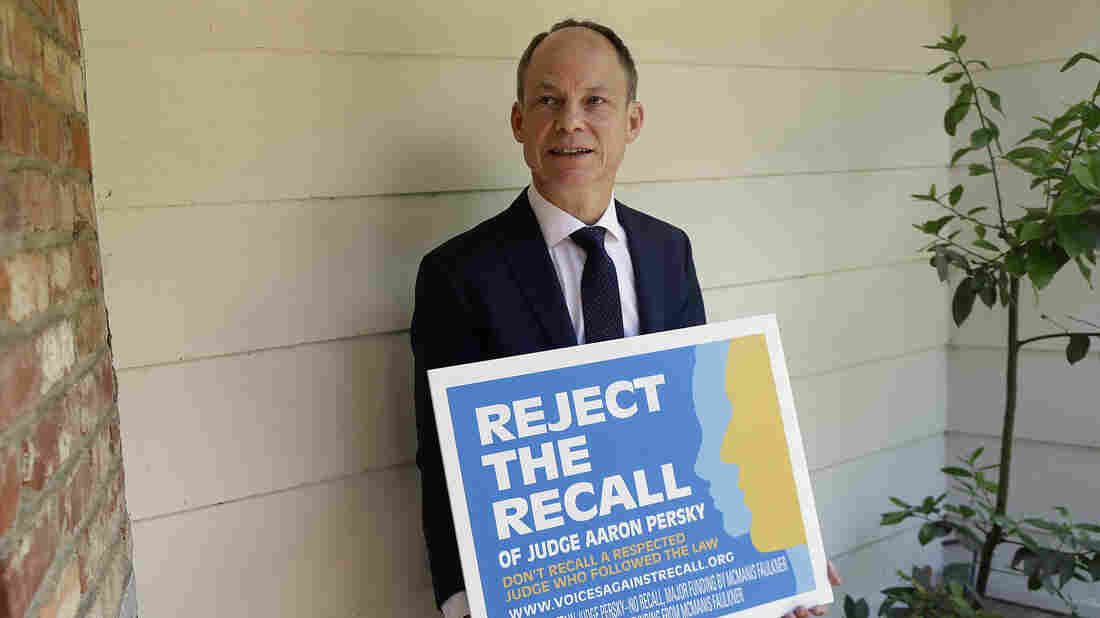 Judge Aaron Persky poses for a photo with a sign opposing his recall in Los Altos Hills, Calif., on May 15. Voters in Santa Clara County are deciding Tuesday whether to remove Persky from office because he sentenced a former Stanford University swimmer convicted of sexual assault to a short jail sentence instead of prison. Jeff Chiu/AP hide caption 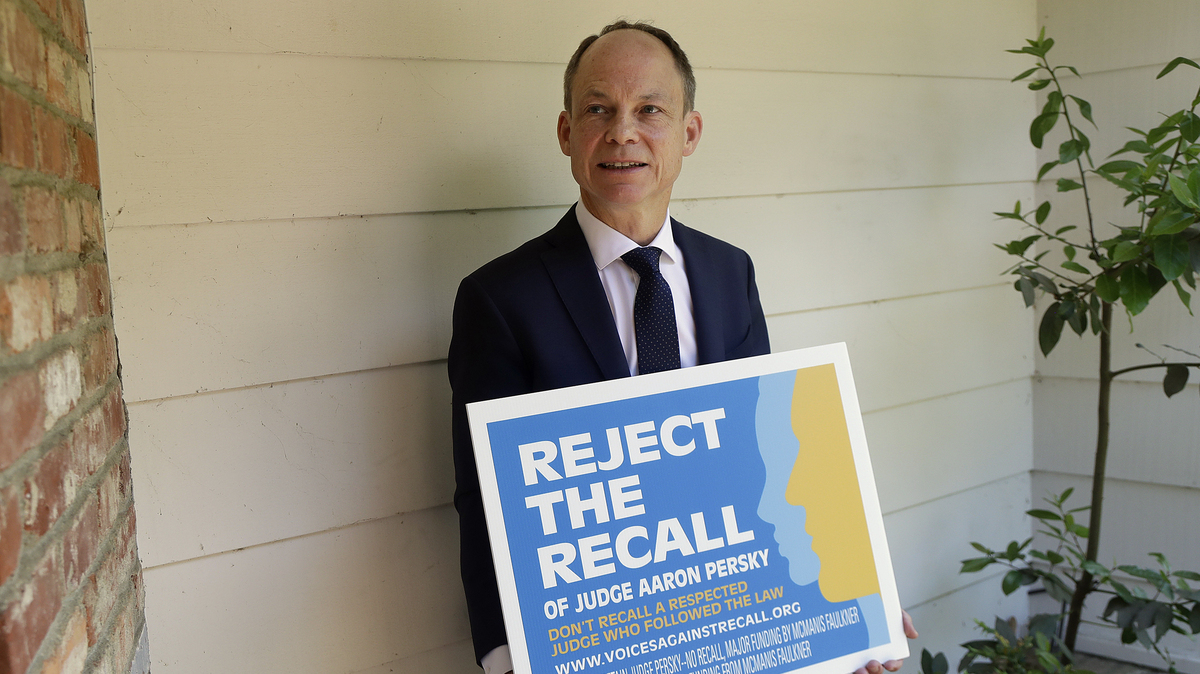 Judge Aaron Persky poses for a photo with a sign opposing his recall in Los Altos Hills, Calif., on May 15. Voters in Santa Clara County are deciding Tuesday whether to remove Persky from office because he sentenced a former Stanford University swimmer convicted of sexual assault to a short jail sentence instead of prison.

Women outraged by the lenient sentence have led a charge to recall Persky from his post, saying he is unfit to serve out the remaining four years of his term. Persky’s defenders say that a recall would undermine judicial independence and might unintentionally lead to longer sentences for far less privileged felons.

Turner was convicted in 2016 of sexually assaulting an unconscious woman behind a dumpster at a fraternity party when he was a student at Stanford University.

The crime could have been punished by up to 14 years in prison, as NPR’s Tovia Smith has reported, but Persky, following the county probation department’s recommendation, sentenced Turner to six months in county jail. He only served three months due to good behavior.

At the sentencing, Turner’s victim read an eloquent statement about how the assault — and Turner’s refusal to apologize for it — hurt her irreversibly.

Meanwhile, Persky said at the sentencing that “a prison sentence would have a severe impact on [Turner].”

Almost immediately, public support for a recall began to surge. Stanford law professor Michele Dauber, a family friend of Turner’s victim, led a campaign that ultimately got the recall on the county ballot for Tuesday’s vote.

Dauber spoke to NPR in 2016 and explained why she believes a recall is essential:

“Judge Persky is a criminal judge, one of the very few criminal judges, who has jurisdiction over Stanford. So that means that we would be waiting six more years in order to remove him according to the regular election process, and any sexual assaults that happen on the Stanford campus during that time would be highly unlikely to receive a prison sentence based on this precedent. So we think this is dangerous; we can’t really let it go on for another six years. We need justice for women now.”

LaDoris Cordell, a retired superior court judge in California, spoke to NPR in February and explained why she’s opposed to the recall:

“I believe it is a dangerous threat to the independence of the judiciary … [Persky] has no record of bias or misconduct. And I’m opposed to it because I believe this recall is terrible for racial justice. … If it succeeds, it sends a message to every judge on every court in California and really beyond …. A lot of the defendants are young people, and mostly males, of color — Latino and African-American. They are the ones who are going to receive the sentencings of these judges who are going to be hesitant, if not fearful, to impose a leniency in a sentence.”

If the recall effort is successful, Persky will be the first California judge to be recalled in more than 85 years. In 1932, three judges were recalled after an investigation found they exploited their posts for personal profit.

Persky says he has no regrets over the sentencing, The Associated Press reports.

He “stopped hearing criminal cases after the Turner uproar and now works from home as a night judge, issuing warrants and protective orders in domestic violence cases,” the Los Angeles Times reports.

Meanwhile, Turner is appealing his conviction, arguing that not enough character witnesses were allowed to testify on his behalf.

The fight over whether to recall Persky has been bitter.

The Times reports that it has “fractured long-term friendships, divided the liberal Democratic community … and pitted feminists against feminists.”

Supporters of the recall allege that in addition to the Turner sentencing, Persky has demonstrated a pattern of leniency toward athletes and in cases involving sexual assault, other sex crimes or domestic violence.

The state’s Commission on Judicial Performance investigated four cases that had been the subject of complaints and did not find a pattern of bias — but the recall campaign says the commission’s report was “error-ridden.”

Debates over the recall have, in some cases, become virulent arguments over the sexual assault itself. Some Persky backers defend the short sentence — and by extension, defend Turner.

One supporter argued that the assault case should never even have gone to trial, because he said it centered on “a nebulous sexual encounter” in which both participants were drunk. The recall campaigners are infuriated by such comments, and point to a pattern of victim-blaming by Turner apologists.

Last month, Jim McManis, who identified himself as a lawyer representing Persky, fueled even more outrage in a phone interview he gave to Vogue. McManis said that Turner’s victim “was not attacked,” and accused her of not writing her own victim statement.

A battle over ‘judicial independence’

Other Persky backers aren’t interested in defending the six-month sentence. It might have been inappropriate, even unjust, they say — but it wasn’t illegal, and a recall in response could have unintended consequences, they warn.

Jeffrey Rosen, the district attorney who prosecuted Turner, says he “vehemently opposed” the sentence the judge imposed — in fact, after the case ended, Rosen says he helped the state create a law that sets mandatory minimum prison sentences for similar sexual assaults.

But the original sentence was lawful at the time Persky imposed it. So Rosen, like retired Judge LaDoris Cordell, opposes the recall. He writes:

“Subjecting judges to recall when they follow the law and do something unpopular undermines judicial independence. … When judges believe that they will lose their careers for making unpopular but lawful decisions, they may lack the courage to stand up for the rights of minorities or others needing protection from powerful majorities.”

The Recall Aaron Persky campaign has responded to concerns over judicial independence in a statement that reads, in part, “California judges are accountable to voters, and that means considering judges’ previous decisions. … It is up to the voters to determine whether or not Judge Persky continues in office, and the voters may consider his history on the bench including his decisions in making their determination.”

In a statement released last week, the president of the Santa Clara County Bar Association, Kevin Hammon, focuses on the possible consequences for other, less privileged criminals.

Hammon says there is a “special danger” in punishing a judge for being lenient because it sends a message to other judges, exacerbating over-incarceration and precluding “a thoughtful consideration of individualized circumstances.”

He raises the example of abusive or neglectful parents who have experienced traumas or are struggling with addiction. People who have “done terrible things” can meaningfully change their lives, he writes. But a judge would have to give them that chance — and from the outside, that might look like “leniency.” The recall effort might suggest to judges that such decisions would put their jobs in jeopardy, Hammon says.

“I will vote against the recall because I value rehabilitation,” Hammon writes.

The recall campaign has responded to such arguments by saying it’s possible to recall Persky, in order to support women who are victims of sexual violence, while also advocating for criminal justice reform, including reducing mass incarceration.

“Both are important and justice is not zero sum,” the campaign writes.