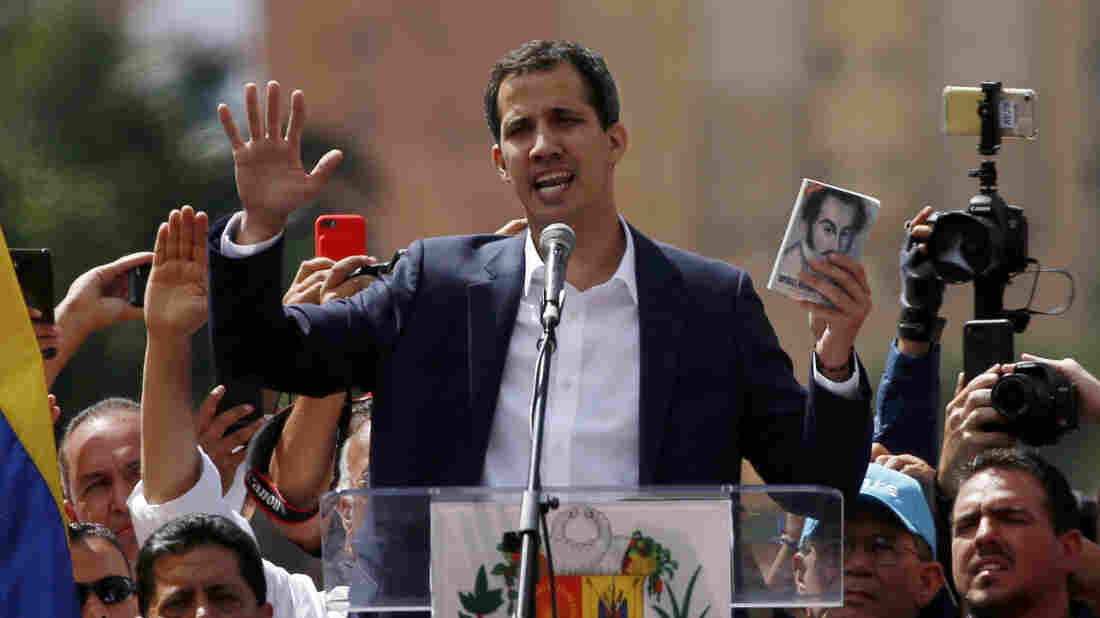 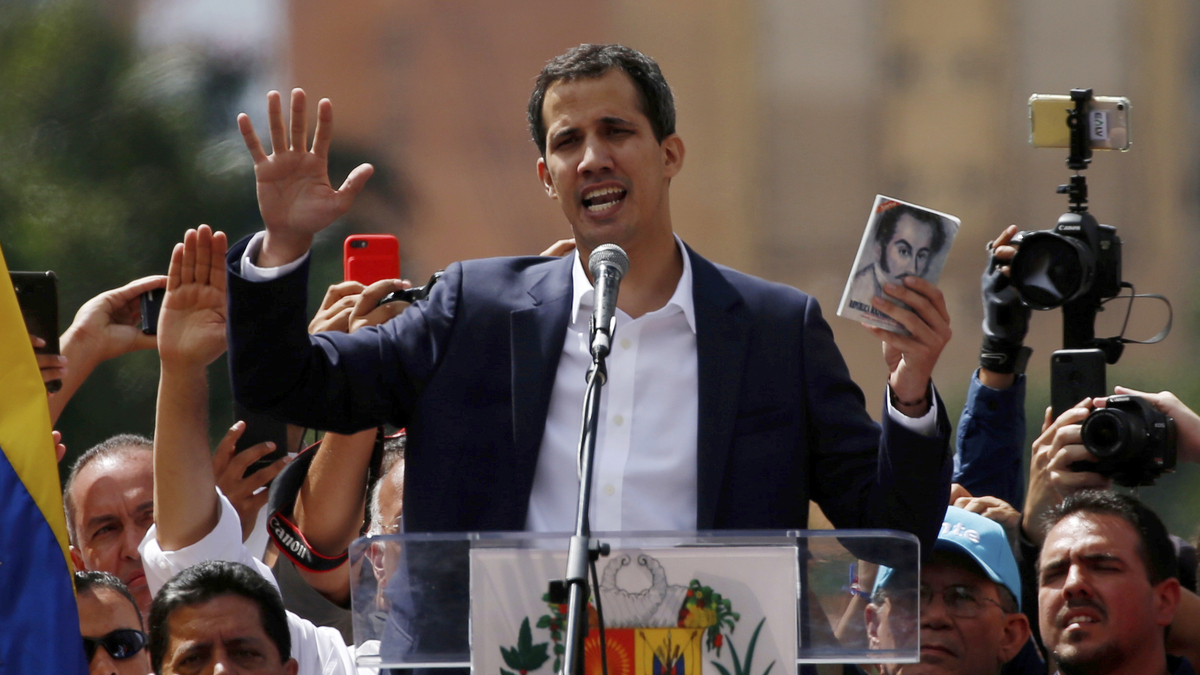 Juan Guaidó, head of Venezuela’s opposition-run congress, declares himself interim president of Venezuela during a rally against President Nicolás Maduro in Caracas on Wednesday.

Guaidó, the 35-year-old recently elected head of Venezuela’s National Assembly, took the oath of office on an outdoor podium in Caracas, flanked by yellow, blue and red Venezuelan flags. He raised his right hand as a crowd erupted in cheers. He promised to serve as interim leader and call for general elections.

The U.S. swiftly proclaimed its support for Guaidó.

“The people of Venezuela have courageously spoken out against Maduro and his regime and demanded freedom and the rule of law,” President Trump said in a statement. He pressed other governments to recognize Guaidó and pledged “to use the full weight of United States economic and diplomatic power to press for the restoration of Venezuelan democracy.”

Maduro has not agreed to cede power. A senior U.S. administration official said all options were on the table to force him out of office, but did not specify which measures Washington might use.

Guaidó was empowered to try to take the reins of government after hundreds of thousands of Venezuelans answered his nationwide call to rally for regime change. The demonstrations were timed to coincide with the anniversary of a 1958 coup that toppled military despot Marcos Pérez Jiménez.

Early Wednesday, Guaidó tweeted that protests were underway in Caracas and the coastal cities of Carúpano and Maracaibo, showing that his movement had reached distant locations. He used the protest hashtag #GritemosConBrio, which means “Let’s cry out loud” and also is part of the chorus of the Venezuelan national anthem.

In 2017, Maduro snuffed an attempt to oust him. Months of protests nationwide ended after more than 120 people were killed, mostly by security forces.

Jason Marczak, the director of the Atlantic Council’s Adrienne Arsht Latin America Center, said Guaidó’s movement was stronger than previous pushes to unseat Maduro because the opposition was united around one leader and enjoyed strong support from the U.S. and other nations. 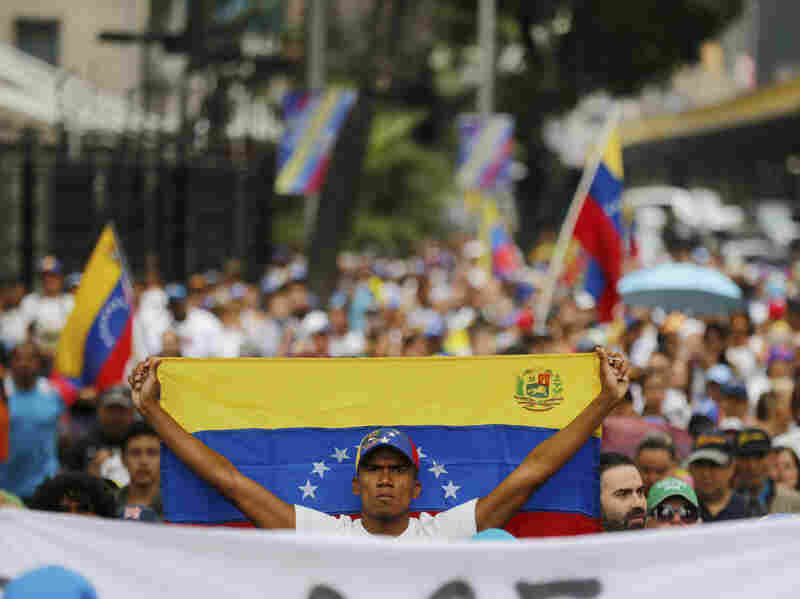 An opposition member holds a Venezuelan national flag during a protest against President Nicolás Maduro in the country’s capital of Caracas on Wednesday. Fernando Llano/AP hide caption 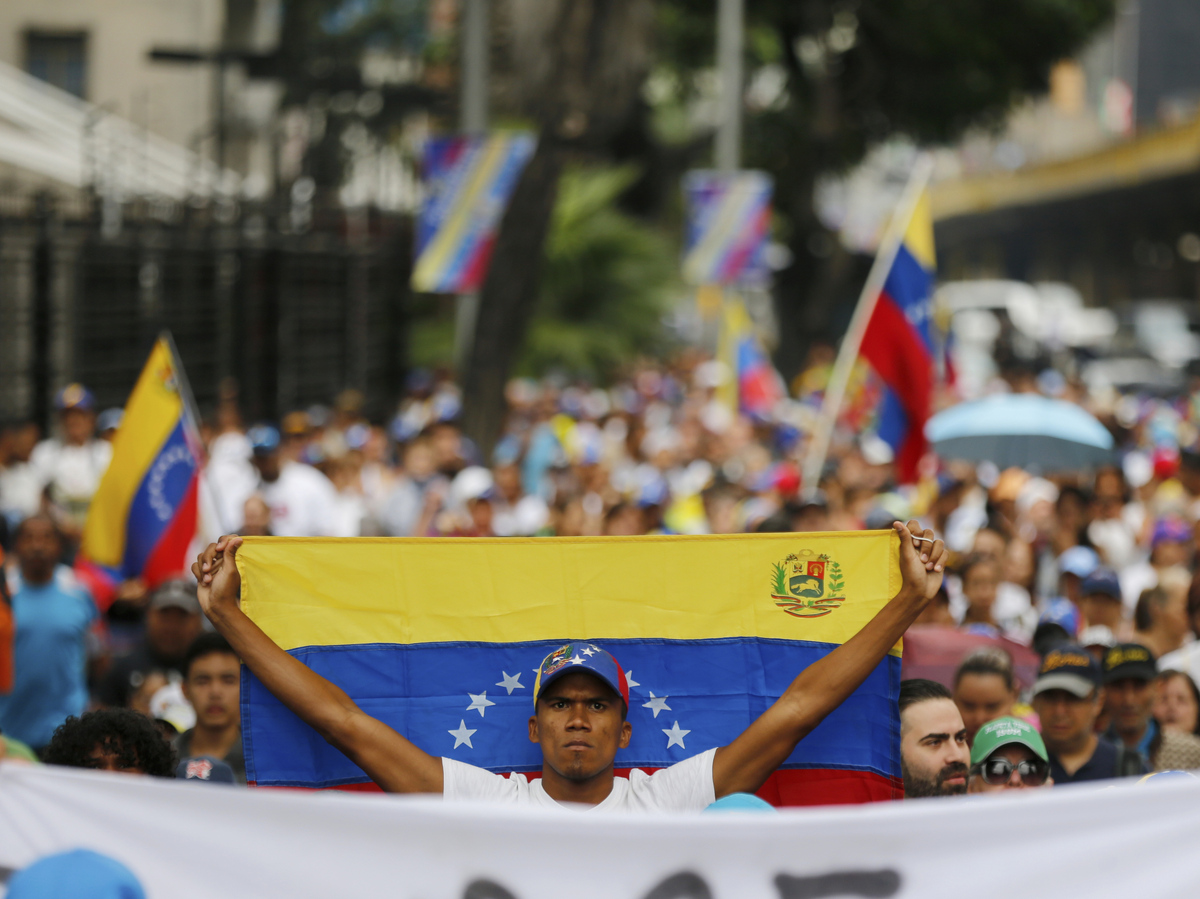 An opposition member holds a Venezuelan national flag during a protest against President Nicolás Maduro in the country’s capital of Caracas on Wednesday.

Under Maduro’s rule, Venezuela’s economy has nosedived, inflation has soared, and basic foods and medical supplies have grown scarce. Millions of Venezuelans have fled the country, mostly to neighboring Colombia and Brazil as well as Ecuador, Peru and other Latin American countries. Most opposition leaders have been exiled, imprisoned or banned from running for office, John Otis reports for NPR.

Guaidó breathed new life into the opposition, bringing together followers in town hall meetings called cabildos and pledging to bring about open, free elections. He has urged the military to abandon its loyalty to Maduro, offering amnesty to officers who turn against the president. On Wednesday, he repeated his call: “To all the armed forces, our call is very clear, from this parliament we shake your hands and ask you to stand with the Constitution and the people, your people,” Guaidó wrote.

Much of the military has so far remained loyal to Maduro even though troops’ salaries have shrunk due to inflation and their equipment has decayed amid the years-long economic crisis, Reuters reports. Maduro also has cultivated senior officers by lavishing them with privileges, including key posts within the lucrative state oil monopoly.

Maduro exhorted his supporters to turn out in rival demonstrations on Wednesday. “Men and women of the fatherland, be calm and mobilize the people to win peace and stability for Venezuela,” Maduro wrote. “The streets belong to the people!”

The U.S., Brazil and the Organization of American States had lent their backing to Venezuela’s opposition before Wednesday’s protests, Otis reports. Vice President Pence extended his support to the National Assembly via a video with Spanish subtitles that he posted to Twitter on Tuesday.

Rep. Ro Khanna, D-Calif., criticized the Trump administration Wednesday for what he called hypocrisy after the president’s refusal to condemn Saudi Arabia after the journalist Jamal Khashoggi was killed in Riyadh’s consulate in Turkey. “Let me get this straight,” Khanna wrote. “The US is sanctioning Venezuela for their lack of democracy but not Saudi Arabia?”

Let me get this straight. The US is sanctioning Venezuela for their lack of democracy but not Saudi Arabia? Such hypocrisy. Maduro’s policies are bad and not helping his people, but crippling sanctions or pushing for regime change will only make the situation worse. https://t.co/NU6ikw0hoC