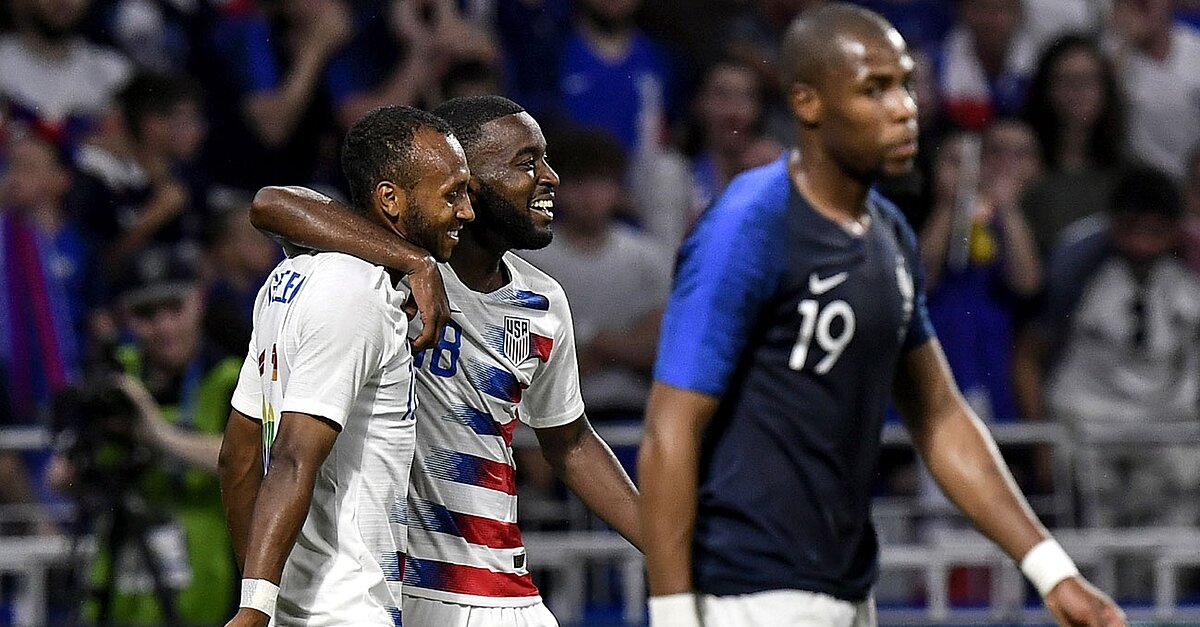 What most expected to be a one-sided rout wound up being quite the lasting impression.

A young and wide-eyed U.S. men’s national team held firm in the face of a world-class France team in Lyon, completing its training camp with a 1-1 draw against Les Bleus on Saturday. France dominated the ball (outpossessed the U.S. 70 percent to 30) and had the lion’s share of chances (outshot the U.S. 19-2), as expected, but the Americans defended with numbers, and goalkeeper Zack Steffen came up big when called upon to ensure all of that amounted to a single goal.

Julian Green’s goal out of nowhere–the first U.S. goal ever scored aginst France–opened the scoring just before halftime, but Kylian Mbappe’s equalizer in the 78th minute gave France positive momentum it can take to Russia, while avoiding being sent off with jeers from its own supporters.

Here are three thoughts on the surprise result and its possible implications:

A strong way to finish

This was by no means a perfect game for the U.S., but given the expectations–especially after how things looked against Ireland last week–there was reason to walk away feeling somewhat optimistic.

The USA’s 5-3-2 setup–a first deviation from the 4-1-4-1 that has become a staple under interim manager Dave Sarachan–meant the Americans were entering the match ready to concede the ball, and that’s how things played out. Midfielders Weston McKennie and Tyler Adams did yeoman’s work in applying support for the five defenders behind them, and while France whipped in 19 shots, only a handful of them required Steffen to exert himself.

We’ve seen this script play out before with U.S. teams in the past. Overmatched in talent, the U.S. defends its heart out and hopes to nick a goal. That came, this time, from Green, who pounced on a terrible Djibril Sidibe touch off a seemingly harmless Shaq Moore cross and beat Hugo Lloris with a first-time finish inside the near post.

Was the match a total success? It depends what your hopes were. Intriguing talents Keaton Parks and Andrija Novakovich were healthy scratches, and Tim Weah, who has the most familiarity with France’s stars of anyone, didn’t get off the bench. Only so many can get on the field, but if the point of this camp is seeing what you’ve got, one could argue that some stones were left unturned.

The U.S. also did a rather terrible job of relieving the pressure on itself. On a pair of first-half ocassions Matt Miazga attempted to complete passes through the lines and play out of the back, only for unforced errors on the receiving end to cede possession. That’s no way to beat a powerhouse. Every touch has to be crisp, or you risk being ripped apart by a punishing opposition.

But Steffen was a rock in the back and has cemented his status as the No. 1 goalkeeper going forward, and the team spirit and fight that U.S. fans have come to recognize (and miss over the course of the last year-plus) were evident again. The end goal, of course, is to be even with or superior to a side like France, not to accept being second-best and absorb its possession and pressure. Perhaps in a few years’ time, this young core will grow to be at that level. In the meantime, it was a strong way to finish a two-week camp.

The end of the transition period

Sarachan has steered the U.S. ship in extraordinarily brutal circumstances, and he’s largely, and eventually, done what most in the U.S. supporter peanut gallery wanted. Perhaps not to the full degree, but the list of young players who have received their first caps in the past few months is extensive. He proclaimed that he was setting out to give players a glimpse of what to expect in a national team camp, and while that doesn’t necessarily mean going out and playing all 90 minutes regardless of training performance or opponent, those players have now had a taste.

There are few consequences now, of course. It’s widely expected that the U.S. will go in a different direction when it hires a full-time coach, something that now falls under new general manager Earnie Stewart’s umbrella. Without that big unknown answered and without a single competitive match for another year, it’s hard to completely judge just how impactful these last six months were.

More tough friendly matches are coming, though, with a fall slate that is expected to include Brazil, Mexico, Argentina, Colombia, Italy and England likely to test this young core even more. Player selection will be up to the new manager, but there’s reason to believe that a lot of the players called in during the March and most recent camps will figure into the picture. Will veterans like Michael Bradley, Clint Dempsey, Jozy Altidore and others join them? That’s a question for a to-be-hired coach to answer.

At last, though, the awkward transition period of purgatory is over. The 2022 cycle begins in a couple of months, and for a program looking forward to getting over its most unthinkable setback, it’s most certainly welcome.

France probably expected to steamroll this USA team, and to a large extent it did–everywhere but the scoreboard. Green’s opener right before the halftime whistle brought on the boo birds, though, and the inability to fully break down the U.S. should give reason for pause, given what France can expect in Russia from its group opponents.

There’s also the matter of Olivier Giroud, who walked off the field bloodied following a head-to-head collision with Miazga (who reportedly required 15 stitches of his own and has been entered into U.S. Soccer’s concussion protocol). If he’s not ready to go, that takes away an important aspect of Didier Deschamps’s team. Naturally, there are stars in droves waiting in the wings, but none who really play like Giroud. If nothing else, his absence allowed Mbappe to be a more central figure, and he came through with the equalizer.

There’s also Lloris, who is a superb shot-stopper but has been prone to the occasional blunder for club and country. While he likely wasn’t expecting Green to win the race to Sidibe’s poor touch and fire away, he has to have his near post covered. That’s a bad goal to concede.

The World Cup often comes down to fine margins, and Les Bleus, who will still be among the favorites regardless of the result, have some tidying up to do once they touch down in Russia.