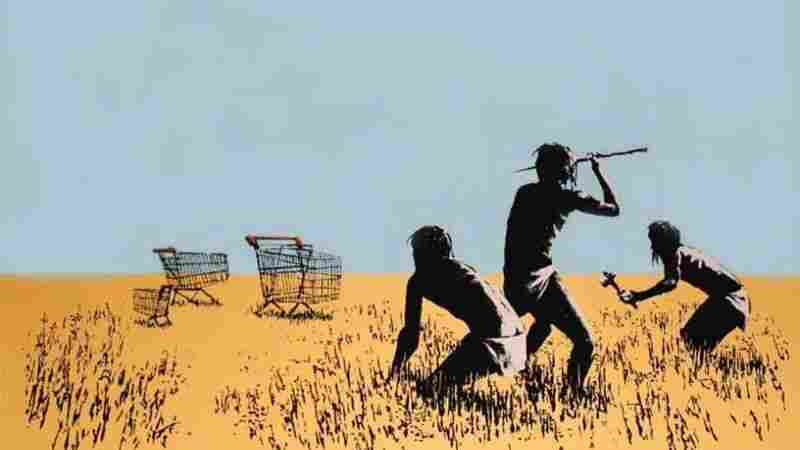 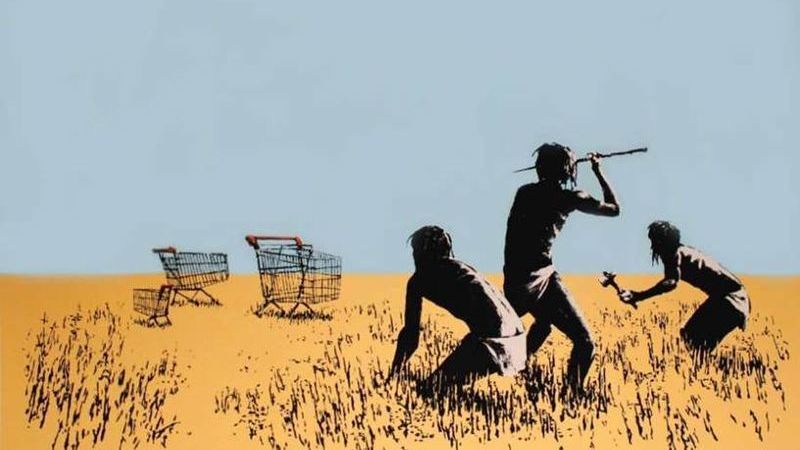 The Toronto Police Service released this image of the Banksy print Trolley Hunters, apparently stolen from an exhibit Sunday.

Right around dawn Sunday, an unidentified figure stole into an art exhibition space in Toronto. Turtled into a sweatshirt, with hands in armpits and face obscured by a camouflage cap, the dark-dressed lurker slinked into a room lined with works by Banksy.

Then, in the surveillance video released Thursday by Toronto police, the person ducks into the camera’s blind spot and emerges with artwork in hand. And the thief carries it quickly out the door.

The apparently burgled work is a print of a piece known as Trolley Hunters, which had been featured in The Art of Banksy, an unauthorized exhibit of the street artist’s work.

It bears mentioning that this isn’t the first time the Toronto exhibit — billed as “the largest Banksy exhibit ever assembled!” — has drawn widespread attention of the less-than-positive variety.

The show features privately owned art curated by Banksy’s former agent and collectively valued at over $35 million, according to organizers. It displays more than 80 prints of works whose originals tend to be graffitied onto building facades, seen for free by passersby, rather than hung from studio walls.

Meanwhile, a general-admission ticket to attend the exhibit costs about $25.

And that discrepancy was not lost on some skeptics, many of whom have pointed out that one of the artist’s lasting themes — seen most vividly in the 2010 Banksy film Exit Through the Gift Shop — has been the lambasting of the art world’s commercialization and cults of celebrity.

Just this week, in fact, Banksy spoke on this point, telling of submitting work to a Royal Academy exhibition under an anagrammed pseudonym and getting refused.

“Then a month later I got a mail from the co-ordinator Grayson Perry asking me to submit something so I sent it again,” Banksy said on Instagram. “It’s now hanging in gallery 3.”

Partly for that reason, perhaps, and partly out of a paranoia that seems suitable when speaking of Banksy, several commenters on the police video and elsewhere on social media appear to have agreed on a single culprit for the theft: Banksy himself.

According to the CBC, though, the show’s publicist has “denied any suggestion the surveillance video was fake or a publicity stunt. She said the thief may have taken only one Banksy piece out of fear of discovery.”

And Toronto police are taking the matter very seriously. They say the stolen work is worth about $45,000, and they are still seeking suspects.