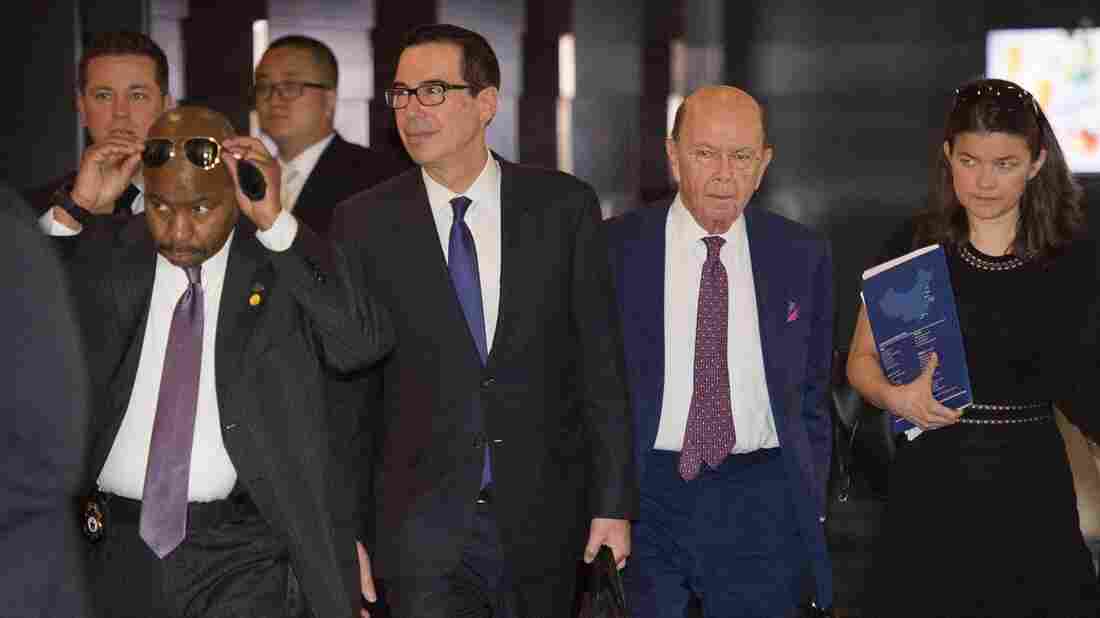 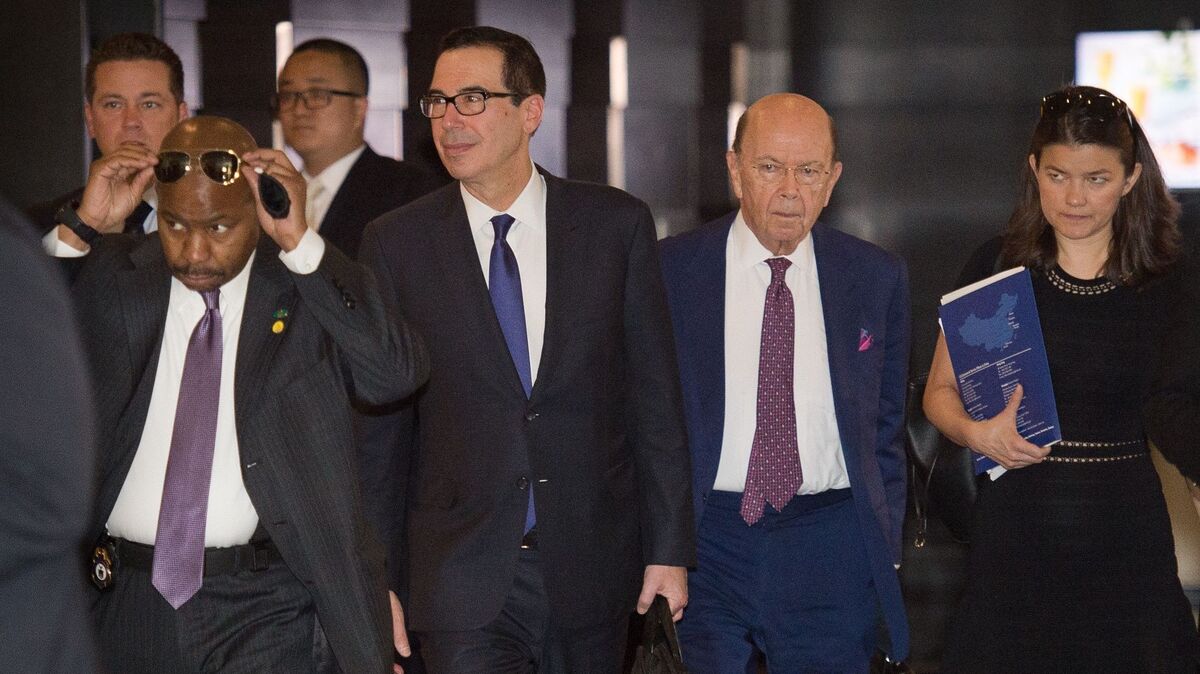 Treasury Secretary Steven Mnuchin (center left) and Commerce Secretary Wilbur Ross (center right) walk through a hotel lobby as they head to a state guest house to meet Chinese officials in Beijing on May 4. The talks included a ” thorough exchange of views,” Chinese media report.

Treasury Secretary Steven Mnuchin and other top U.S. trade officials ended a round of talks in Beijing on Friday, failing to secure large goals that ranged from cutting the trade imbalance by $200 billion to stopping China from targeting U.S. technology and intellectual property.

Both sides say the talks will continue with quarterly meetings.

Despite the lack of tangible progress, Amy Celico, who was a China specialist at the U.S. Trade Representative’s Office under President George W. Bush, says that to some extent in this case, no news is good news.

“The fact that the result of the meeting wasn’t slapping unilateral measures in place — as had been threatened in advance of the meeting — I think is a good one,” Celico told NPR.

After what China’s state-run Xinhua News Agency calls a “thorough exchange of views,” both sides agree that “considerable differences still exist.” While negotiators reached “agreements on some issues,” Xinhua said it will take hard work to make progress.

The report did not name any areas of agreement, other than to say both sides know that a stable U.S.-China trade relationship is vital for both countries, and that more discussion is needed.

China hosted Mnuchin, Secretary of Commerce Wilbur Ross, U.S. Trade Representative Robert Lighthizer and other officials as the two countries looked to back away from the brink of a trade war – including threats of billions of dollars in new tariffs.

“The official New China News agency calls the two days of talks frank, efficient and constructive,” NPR’s Anthony Kuhn reports from Beijing. Anthony adds, “The Trump administration has so far threatened China with $150 billion in tariffs, and China has promised to respond in kind.”

The U.S. contingent hasn’t released its own accounting of the trip, in which it met with a Chinese delegation led by Chinese Vice Premier Liu He.

“There are real issues for U.S. companies operating in China,” Celico said, noting China’s closed business environment. “So I think the Trump administration is right to take action.”

She added, “The Chinese are very reluctant to make concessions here.”

The Americans brought a four-page document to China with a simple title: “Balancing the Trade Relationship Between the United States of America and the People’s Republic of China.”

That document found its way to the media this week. A U.S. official speaking on background confirmed its authenticity, Anthony reports. In it, the U.S. entourage laid out a wide-ranging list of American demands.

A sampling of those demands:

The document states, “China’s tariffs and non-tariff barriers are significantly higher than those of the United States for most tradable goods.”

While Celico credits President Trump’s aggressive approach with forcing China to respond to the American’s longstanding concerns. But she also says to make any real progress, the U.S. will need to involve its other large trading partners.

“We absolutely need Japan, the European Union, Canada, others to join with us in standing up to Chinese unfair trade practices, and pressuring them to make changes to their policies. But our unilateral actions, I think, are making that more difficult. And so, absolutely I encourage the Trump administration — many of us do — to look to our allies and treat them well, as we look to ask for our cooperation with China.”

America’s trade in goods with China topped $635 billion in 2017, according to the U.S. Census Bureau. In that year, the U.S. says its goods trade deficit with China was $375.2 billion.