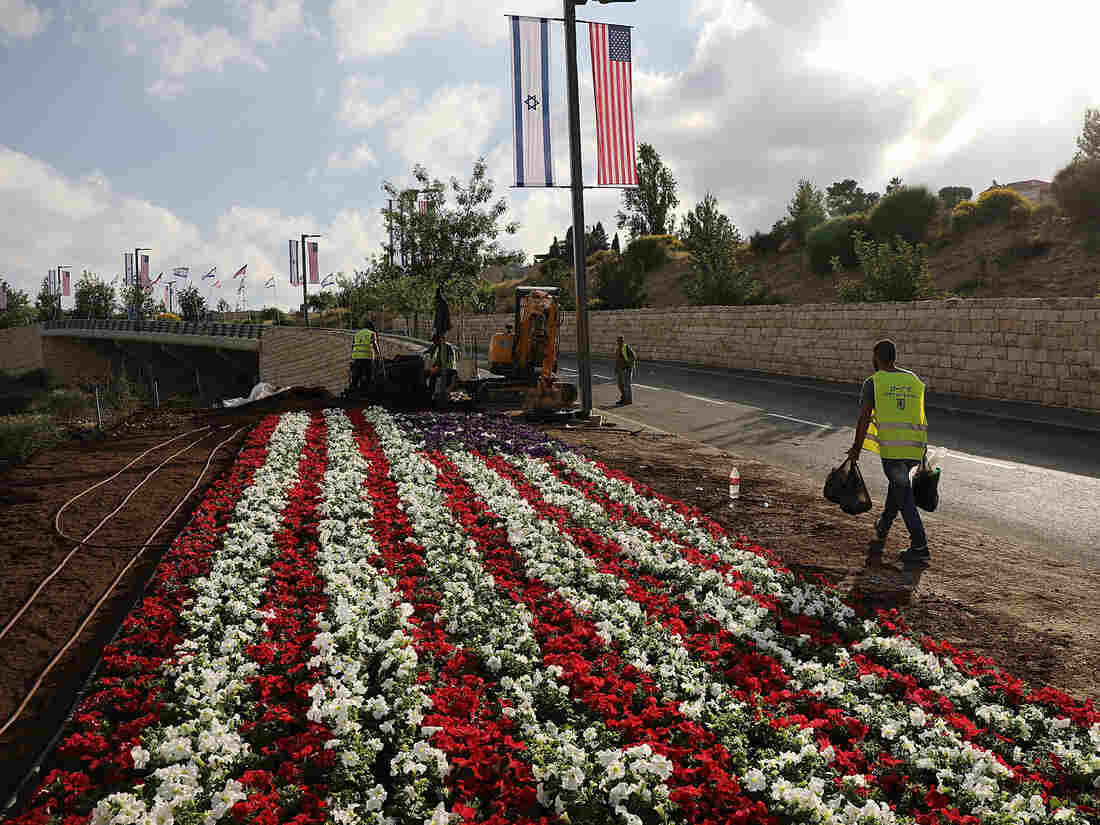 An American flag is designed in flowers near the entrance to the new American embassy in Jerusalem which is scheduled to open on Monday. It is a controversial move. Spencer Platt/Getty Images hide caption 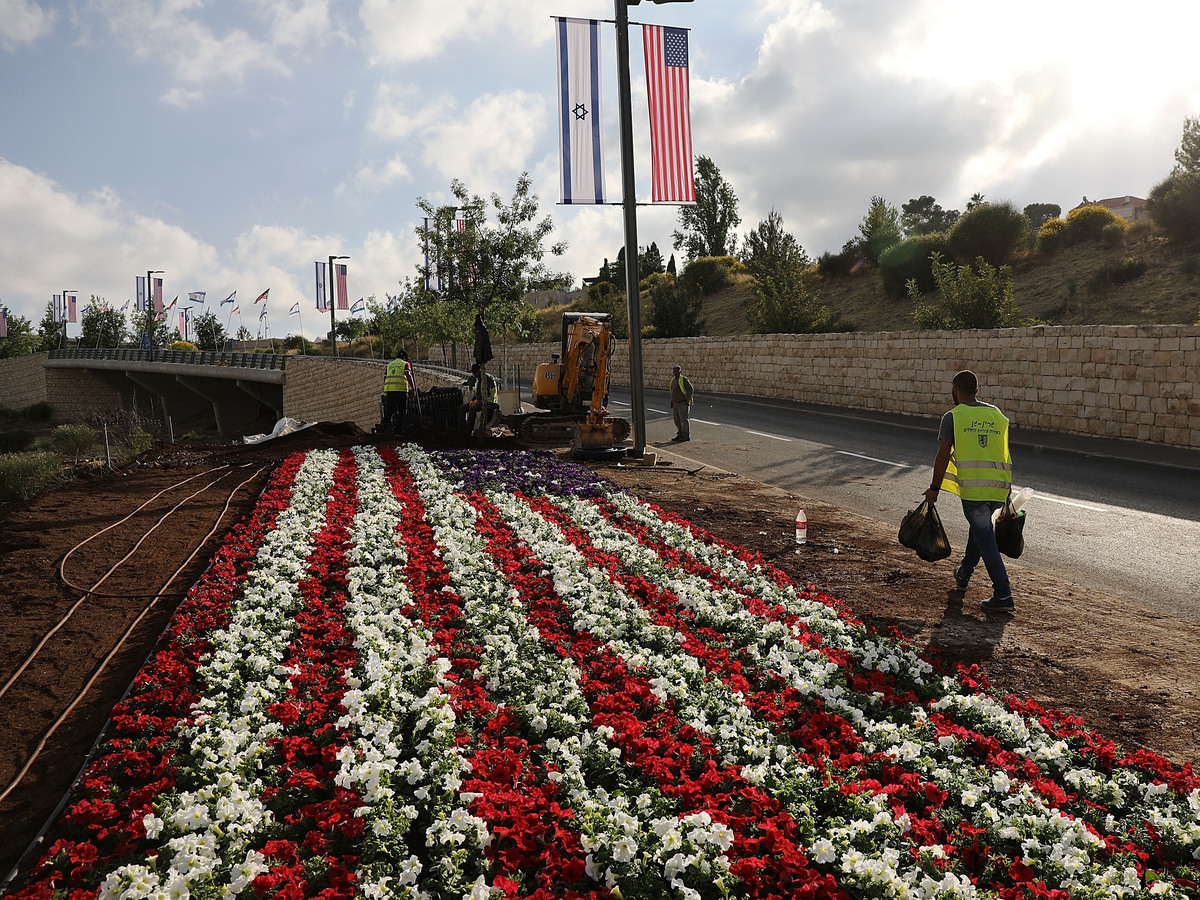 An American flag is designed in flowers near the entrance to the new American embassy in Jerusalem which is scheduled to open on Monday. It is a controversial move.

Come Monday, Jerusalem will be the official home of the U.S. embassy to Israel.

Near the office, American and Israeli flags line the streets. New road signs, written in Hebrew, Arabic and English, point the way to the embassy. The Friends of Zion Museum have plastered buildings and buses with more than 150 billboards in support of President Trump. And on Twitter, the Tel Aviv handle @USEmbassyTA has gone dormant and @usembassyjlm has taken its place.

The U.S. embassy operated on HaYarkon Street in Tel Aviv since the late 1960s. No country has its embassy in Jerusalem because of its contested status — both Israelis and Palestinians see the ancient city as their capital. For decades, U.S. policy refrained from recognizing Jerusalem as Israel’s capital until Israelis and Palestinians settled the matter in a peace agreement.

During his visit to Israel, Vice President Pence said the U.S. would complete its plan to move the embassy by the end of 2019, speeding up a previously announced timeline.

The embassy office was built inside an existing consular services building in Jerusalem, NPR’s Michele Kelemen and Daniel Estrin reported. A new embassy will be constructed years from now.

In the first phase, only the ambassador and his core staff will move from Tel Aviv to Jerusalem, a U.S. official told The Washington Post. The consular staff will become embassy employees and extensions will be built to house more employees. 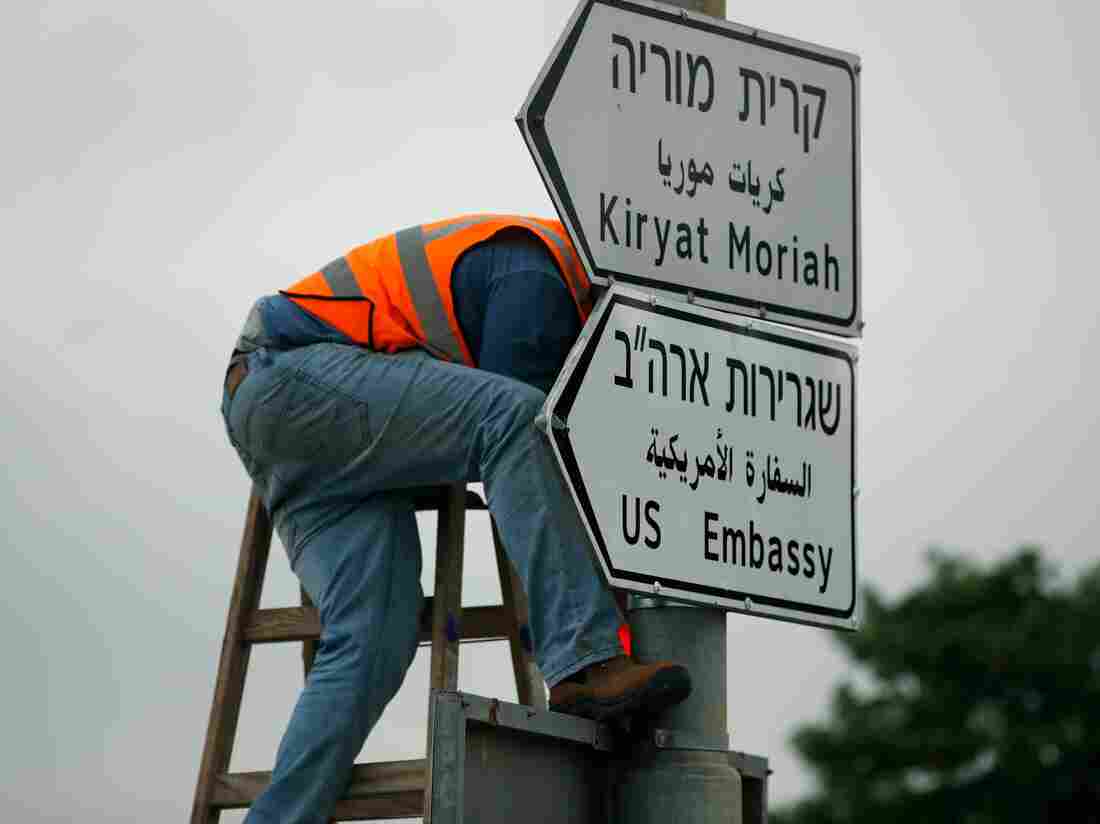 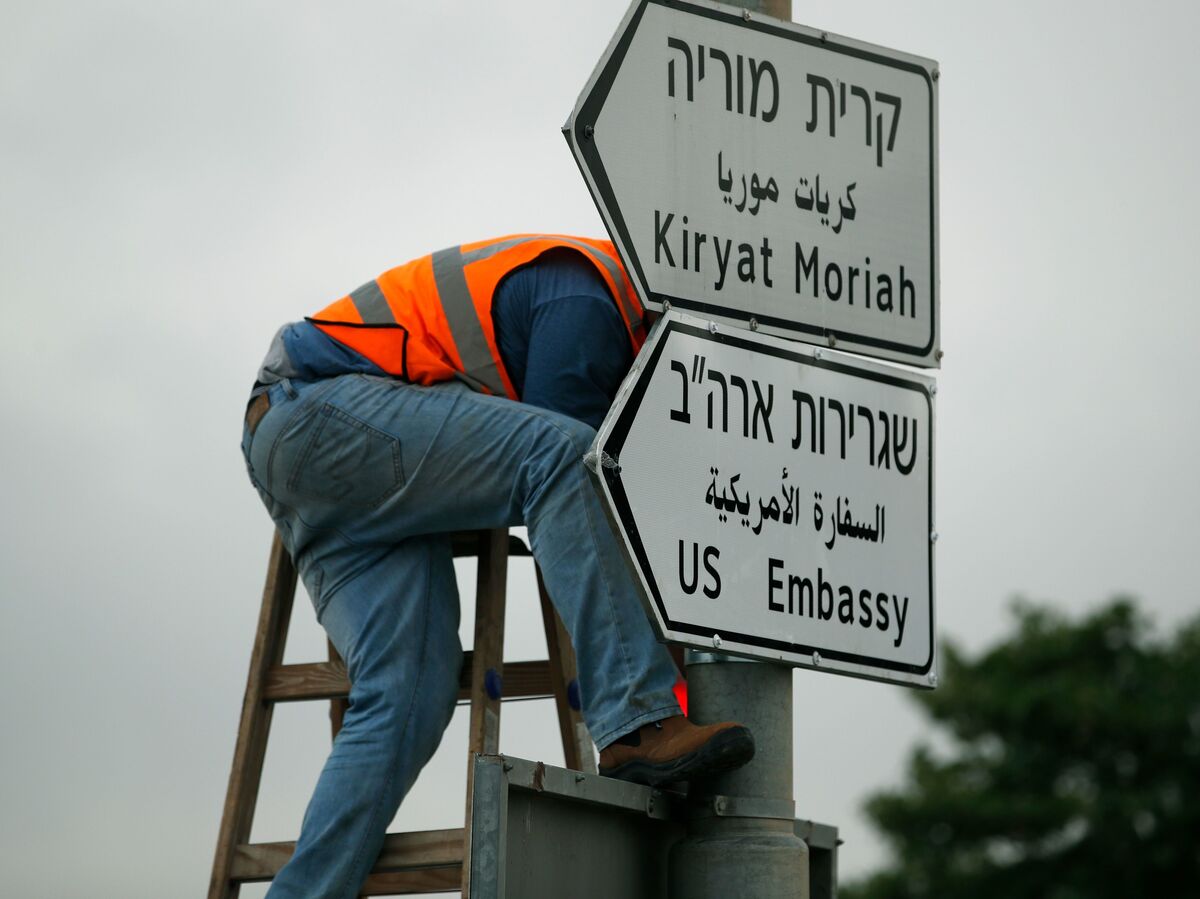 A new road sign points the way to the new U.S. embassy in Jerusalem.

“By recognizing Jerusalem as the capital of Israel and the seat of its government, we’re recognizing reality,” said the new Secretary of State Mike Pompeo in a May meeting with Israeli Prime Minister Benjamin Netanyahu.

“I must tell you that the bold decision by President Trump has prompted other countries – there are quite a few now who are planning to move their embassy to Jerusalem as well,” said Netanyahu. Like Paraguay.

When Trump declared last year that the U.S. embassy would be relocated — “the beginning of a new approach to conflict between Israel and the Palestinians” — it triggered both euphoria and condemnation.

The United Nations General Assembly voted 128-9, rejecting the Trump administration’s decision to recognize Jerusalem as the capital of Israel and approved a nonbinding resolution for countries to avoid moving their embassies to the city.

In the Gaza Strip, protesters immediately took to the streets to denounce the move and burn Israeli and American flags. “This is a black day for peace in the Middle East,” Husam Zomlot, the Palestinian ambassador to the U.S., told NPR.

On Wednesday, Yahya Sinwar, the leader of Hamas in the Gaza Strip, said that protests on the Israeli border will be “decisive” and that Hamas leaders “are ready to die along with tens of thousands,” reported The Times of Israel.

Turkish President Recep Tayyip Erdogan told CNN that the embassy move was a “huge mistake” and that the U.S. “is losing true friends right now.”

But U.S. Ambassador to Israel David Friedman praised the move from the first day, taking to Twitter to say, “Today .@POTUS displayed the ultimate test of leadership and courage by standing up for what’s just and true, even in the face of stiff opposition. Jerusalem is Israel’s capital today as it was 3000 years ago. Congratulations to .@realDonaldTrump for this historic decision.”

In Jerusalem, Mayor Nir Barkat announced on Tuesday that he will formally name an area near the embassy as the United States Square.

“This is the way in which Jerusalem returns love to the president and residents of the United States who stand by the state of Israel,” the mayor said in a press release that The Jerusalem Post reported.

The State Department told NPR that it will be updating government maps to denote Jerusalem with a star, in line with its designation of other capital cities. 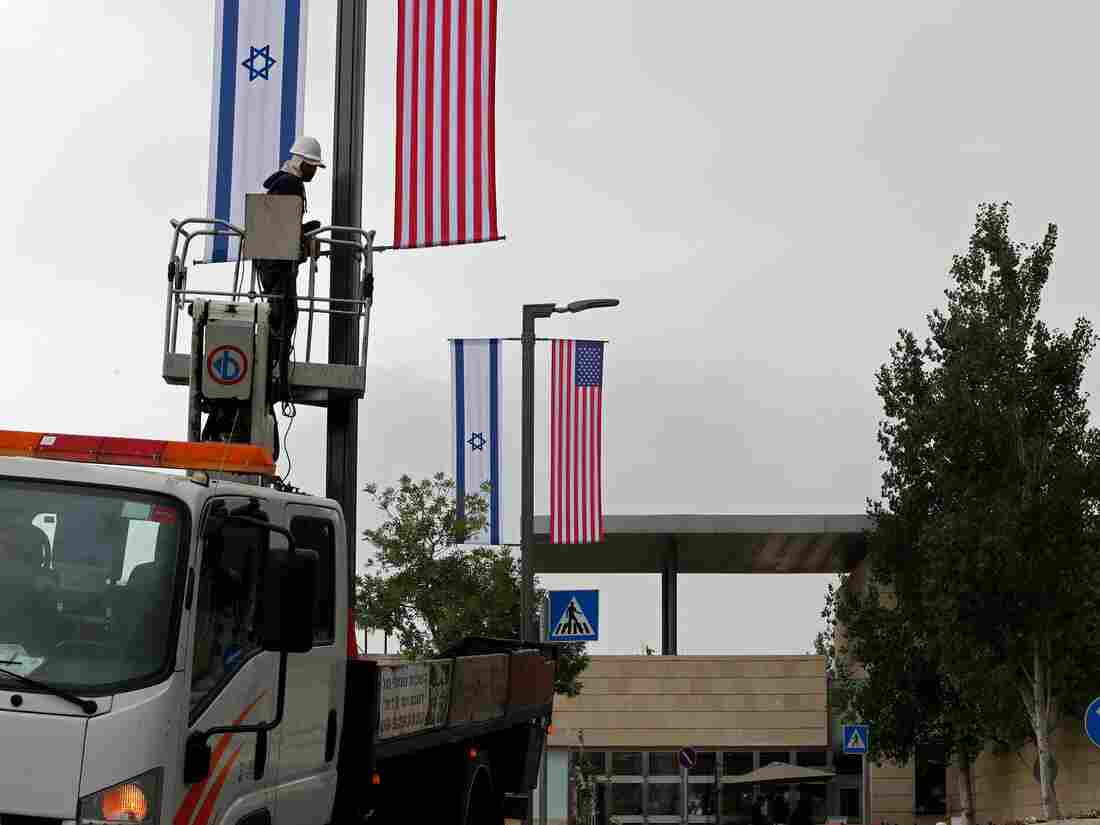 A worker installs decorations of Israeli and US flags on Monday. Thomas Coex/AFP/Getty Images hide caption 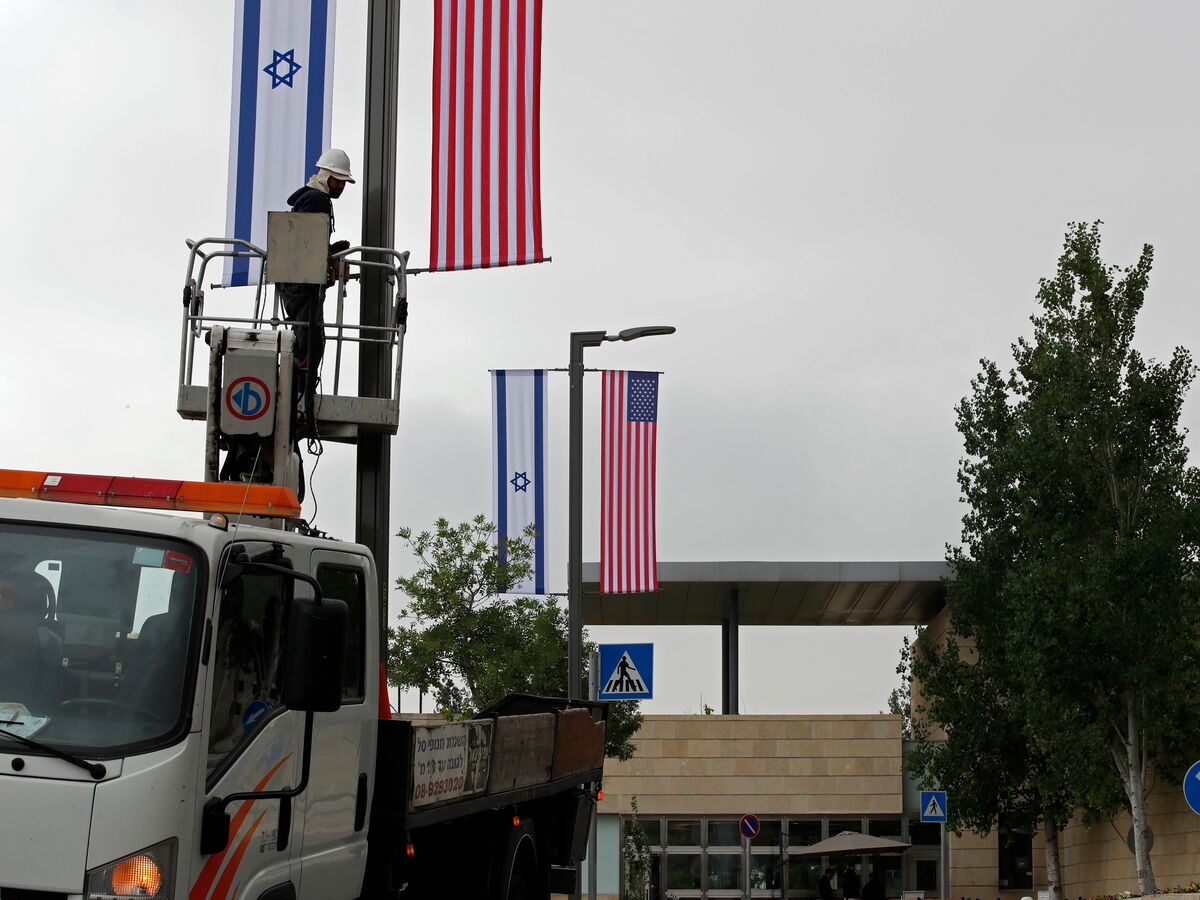 A worker installs decorations of Israeli and US flags on Monday.

But the specific boundaries of Israeli sovereignty remain subject to negotiations.

“By taking the long-overdue step of moving our Embassy, we are not taking a position on final status issues. We are not taking a position on the specific boundaries of Israeli sovereignty in Jerusalem, nor on the resolution of contested borders. Those questions are up to the parties involved. We remain committed to advancing an agreement between the parties that leads to a lasting and comprehensive peace,” Edgar Vasquez, spokesman for the State Department’s Bureau of Near Eastern Affairs, told NPR.

A delegation will attend the opening of the embassy, Trump announced on Monday. In attendance will be presidential advisors Ivanka Trump and Jared Kushner, Deputy Secretary of State John Sullivan and Treasury Secretary Steven Mnuchin, along with hundreds of other guests.

The White House has said that the president himself is not scheduled to attend.