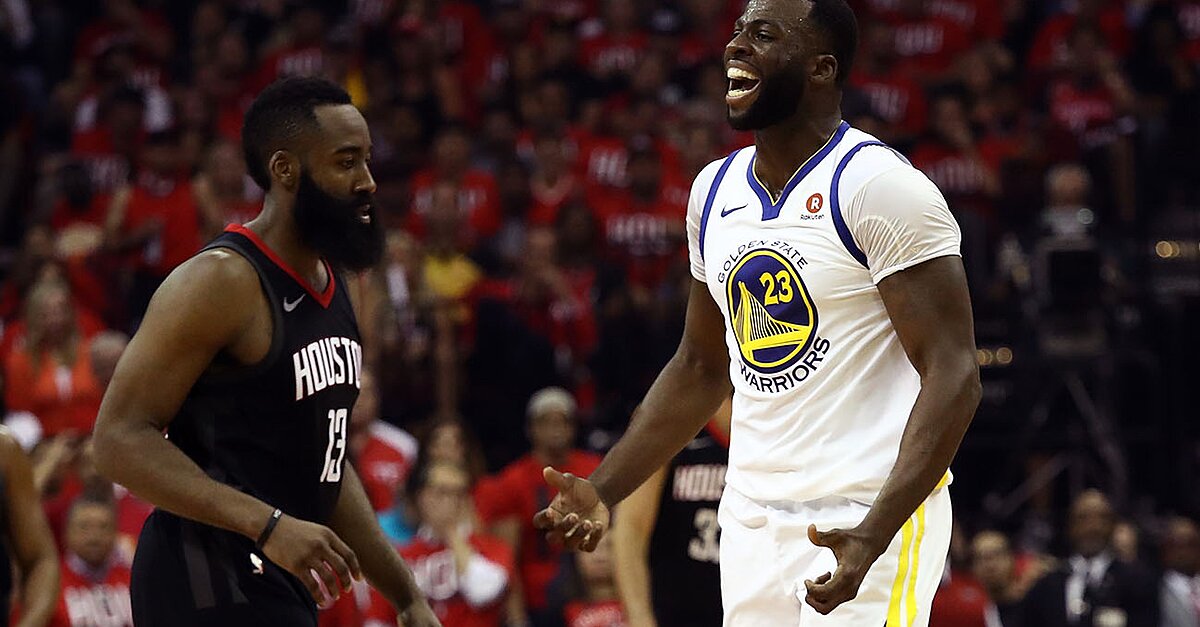 Draymond Green has a way of establishing his presence.

It was 5–0 and barely any time had come off the clock in Game 1 of the Western Conference finals Monday, and Draymond Green was already getting called for a technical foul.

The Warriors’ All-Star forward grabbed the ball after a James Harden layup, but as he went to inbound it, he found himself face-to-face with the Rockets’ star. Instead of side-stepping, Draymond did what Draymond does and tried to go through Harden before eventually pushing him and getting a technical foul.

And then Draymond proceeded to do what Draymond does for the rest of the game—not just push Harden to provoke a flop, but also in doing every little thing on the court he can to help his team win. He had nine rebounds, nine assists, two steals and two blocks to go along with his five points on a night when he had the best plus-minus of any player with a plus-19. Sure, Kevin Durant and Klay Thompson combining for 65 points played a huge role in what happened in the 119–106 win, but so did Draymond being Draymond from the second the ball got tipped. And when he’s doing what he does best, you could argue that sets the Warriors up to be their most dangerous.

A 69-year-old double amputee named Xia Boyu reached the top of Mount Everest on his fifth try at scaling the mountain. Xia had lost his legs due to frostbite he got during an attempt to climb the mountain four decades ago.

The Chinese climber first attempted Everest in 1975, but bad weather stopped his group’s effort, and in the process, Xia lost his feet. His legs were amputated in 1996 after he was diagnosed with lymphoma. He went back in 2014 and ’15 but couldn’t climb because climbing season was canceled, and then in ’16, he was just 200 meters from the peak when bad weather forced him to turn back.

Now, he is one of two double amputees to reach the top of the mount, joining New Zealand’s Mark Inglis who did it in 2006.

After the Browns went 1–15 in 2016, coach Jackson was pretty confident that his team would improve. They didn’t: Cleveland joined the 2008 Detroit Lions as the only other team to go 0-16 after failing to win a game in 2017. So based off a previous wager he made, he will now jump in Lake Erie and raise money for charity.

But what happens if they finish with an even worse record next season? And before you start saying, “You can’t finish worse than 0-16,” remember, we are talking about the Browns.

But shout out to Hue Jackson for making the most of this situation.

TMZ has learned Adidas could be in hot water soon because the Calabasas office where Kanye West designs his Yeezys is being investigated over an employee getting injured by a 3D printer … This soldier had an ear grown on her forearm after losing one in a car crash … Khloe Kardashian was not here for people trying to say OJ Simpson is her father … An ex-Chipotle manager won $8 million in court after being wrongfully accused of stealing $626 … A group of athletes that went missing during the Commonwealth Games in Australia are trying to stay there … A Sichuan Airlines flight had to make an emergency landing after the windshield blew out and the co-pilot was “sucked halfway” out the plane.

There’s a jungle cat on the dance floor

Somebody thought it would be a good idea to bring a live tiger to a prom in Florida.

You should have aimed for the head

So you’re telling me that if Thor had some handcuffs, everything would have been all good?

This guys just had to get some dance moves off while committing burglary.

Everybody can’t be LeBron

Reporters wanted to test Chris Paul and Stephen Curry to see if they could rattle off plays from memory like LeBron James did after Game 1.

Draymond Green thinks LeBron deserves even more love than he got for what he did.

Get it? It’s the names of the cities

That’s where it comes from

Email khadrice.rollins@simail.com with any feedback or ping me on Twitter. Click here for previous editions of Hot Clicks. Visit our Extra Mustard page throughout each day for more offbeat sports stories.