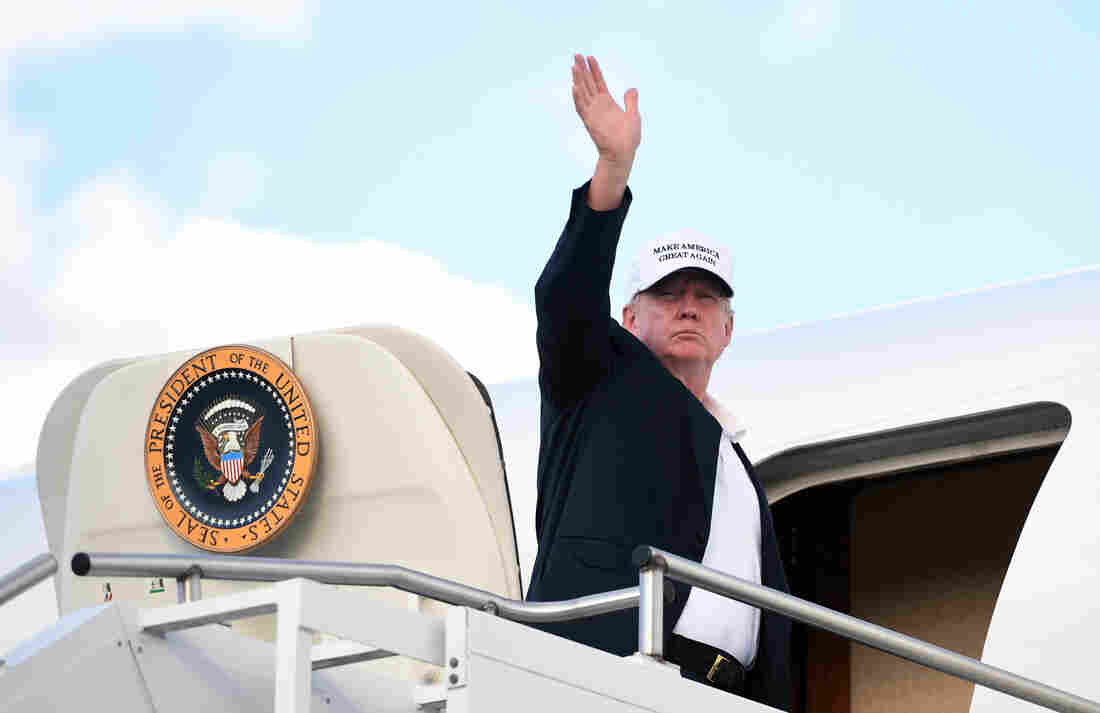 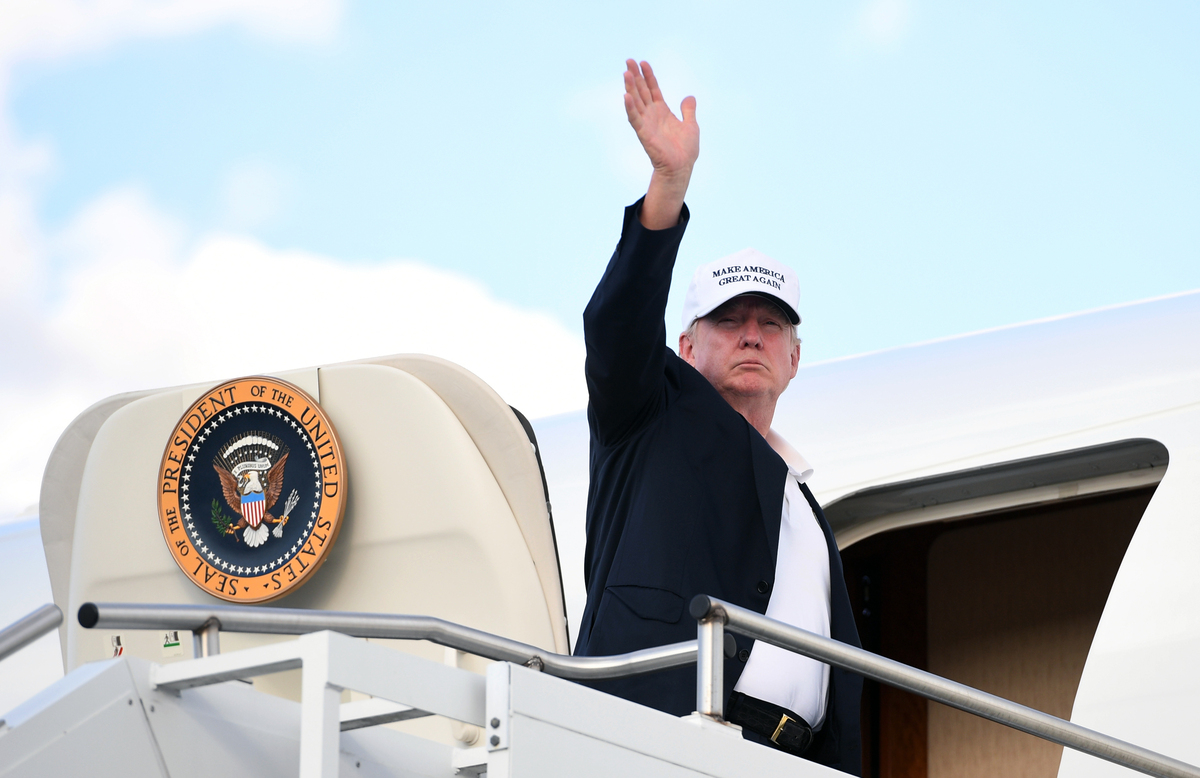 President Trump boards Air Force One after spending the weekend at Trump National Golf Club in Bedminster, N.J. before heading back to Washington.

We noted on Friday that the emerging theme of the 2018 elections is volatility.

“Frankly it is about volatility,” a Republican campaign operative told NPR.

And now, with just 99 days to go until Election Day, President Trump proved that with a series of tweets over the weekend dealing with immigration, the Mueller Russia probe and the media (which he again referred to as the “Enemy of the People.”)

The tweets, a good synthesis of some of Trump’s Greatest Hits during the first year and a half of his presidency, could upend the midterm elections.

For example, he threatened to shut down the government over immigration, something that seemingly came out of the blue.

I would be willing to “shut down” government if the Democrats do not give us the votes for Border Security, which includes the Wall! Must get rid of Lottery, Catch & Release etc. and finally go to system of Immigration based on MERIT! We need great people coming into our Country!

Talk about volatility. Think about the timing of a potential shutdown — one would come right as the election season is in full swing, as funding for the government expires Sept. 30. How about that for an October surprise?

Trump clearly thinks it’s an issue that will help him and Republicans for 2018, but there is little evidence for that.

Immigration is an issue that clearly fires up people on the left and right, and is arguably the most animating issue for the GOP. Republican operatives note that immigration can help the party, depending on how it’s framed.

But Trump’s approach is one that only is popular with the base. And while getting the base out is important in a midterm year, most analysts would argue that independents are more key. Trump, though, has done little to reach out to the middle, and, largely, independents have soured on Trump’s approach.

Last week’s NPR/PBS NewsHour/Marist poll, for example, found independents were more likely to vote for someone who opposes Trump’s immigration policies (44 to 37 percent) and that they believe the direction Trump is moving U.S. immigration policy is changing for the worse (48 to 36 percent).

When Trump tweets that families need to be separated because “many are just using children for their own sinister purposes,” that just doesn’t seem to comport with how most Americans view it.

Please understand, there are consequences when people cross our Border illegally, whether they have children or not – and many are just using children for their own sinister purposes. Congress must act on fixing the DUMBEST & WORST immigration laws anywhere in the world! Vote “R”

Two-thirds of Americans opposed this administration’s family separation policy, according to a Quinnipiac poll from last month. Trump rolled back that policy under political pressure. As for independents, 68 percent said they opposed the policy. Fifty-one percent of independents in that poll also said they felt the administration’s immigration policies have been “too aggressive,” and 62 percent of them even said they oppose building a wall along the border with Mexico.

Those are not numbers that lend to helping Republicans win in swing districts, especially if the government is shut down over those very policies.

Trump was also again harping on the Russia investigation. He again insisted, “There is no collusion!” He also referred to the probe as the “Robert Mueller Rigged Witch Hunt,” talked about the now “17 Angry Democrats” running the investigation and even tied in the “Dossier” and Hillary Clinton.

There is No Collusion! The Robert Mueller Rigged Witch Hunt, headed now by 17 (increased from 13, including an Obama White House lawyer) Angry Democrats, was started by a fraudulent Dossier, paid for by Crooked Hillary and the DNC. Therefore, the Witch Hunt is an illegal Scam!

That’s a lot, but only the tip of the tweet iceberg. CNN found Trump said 11 false things in five tweets issued in a 33-minute span Sunday. A CNN producer also noted that Trump has tweeted 18 times using “witch hunt” just this month. Trump has significantly ramped up his use of the term on the social-media platform over the last three months.

That may have been successful in moving the numbers among Republicans, but, again, among independents, it has not.

Half of Republicans in the NPR/Marist poll said they think the Mueller investigation has not been fair toward Trump, but the opposite was true of independents and voters in the suburbs, where so many of this year’s crucial House races are taking place.

Trump has been waging what amounts to a public-relations battle in the court of public opinion, but now the Mueller investigation gets its debut in a court of law. On Tuesday, the trial of Paul Manafort, Trump’s former campaign chairman, begins.

That’s significant because Manafort is so far the only defendant charged by Mueller’s team who is going to trial — and because a verdict is expected in mid-August, right when most people will start tuning into the elections around Labor Day.

Trump seemed to obliquely threaten Mueller and his investigators when he tweeted in May that they “are starting to find out that there is a Court System in place that actually protects people from injustice…and just wait ’till the Courts get to see your unrevealed Conflicts of Interest!”

The 13 Angry Democrats in charge of the Russian Witch Hunt are starting to find out that there is a Court System in place that actually protects people from injustice…and just wait ‘till the Courts get to see your unrevealed Conflicts of Interest!

But now a court will, indeed, decide the fate of the first case to go to trial as a result of the Russia probe — right in the middle of elections with potentially far-reaching consequences.