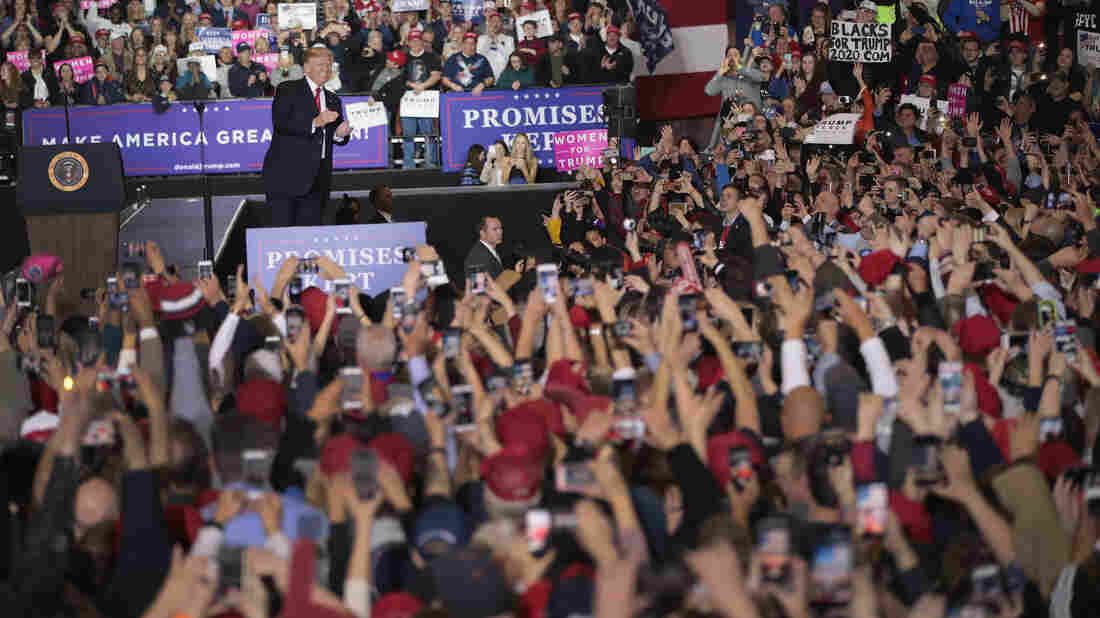 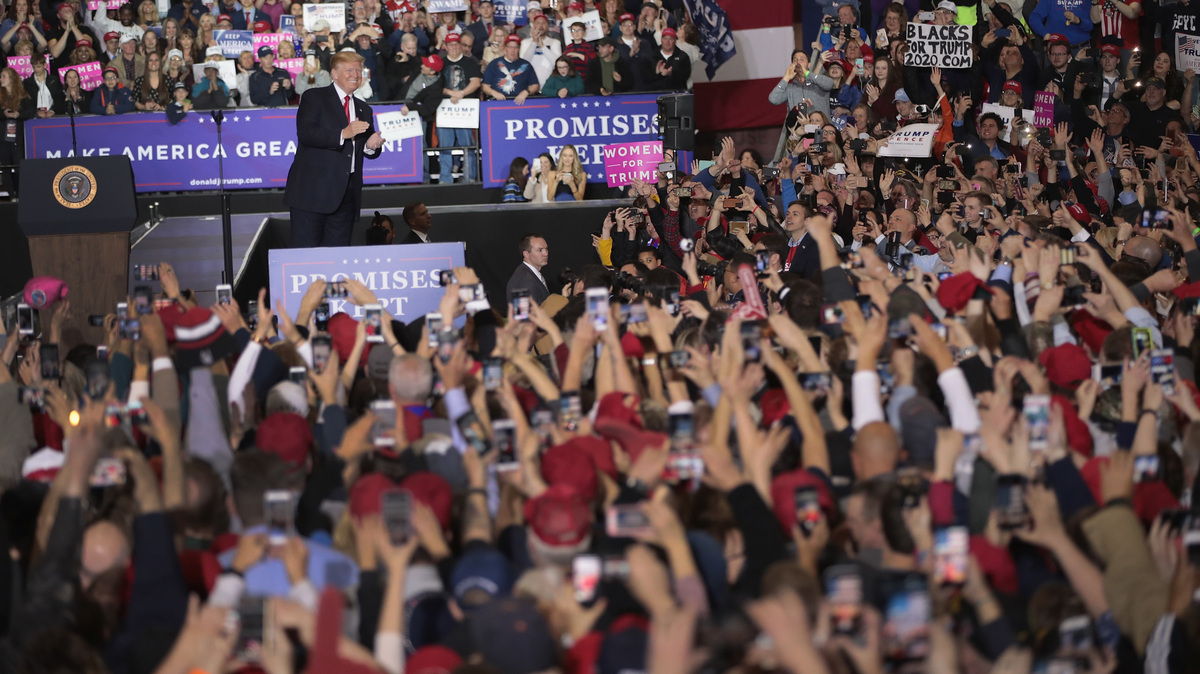 While the White House press corps was gathered in Washington, D.C., Saturday night for an annual gala, President Trump was in another Washington with a different crowd that he much preferred.

For the second year in a row, the president opted not to attend the White House Correspondents’ Dinner and instead hold a campaign rally of his own. And this year, he held it in Washington Township, Mich. — which is located in Macomb County, Mich., the home of the so-called Reagan Democrats, but which is now part of what’s known as “Trump Country.”

“You may have heard I was invited to another event tonight,” the president said, adding “but I’d much rather be in Washington, Michigan, than in Washington, D.C., right now. That I can tell you.”

Despite the night being framed by his absence from the nation’s capital and from an event hosted by D.C. journalists celebrating the First Amendment which his predecessors have dutifully attended, Trump’s remarks focused less on his familiar lines of attack against the media and more on his trademark policy initiatives, his accomplishments during his first 16 months in office and November’s midterm elections.

“We need to elect more Republicans so we can protect our cities, defend our borders, grow our economy and continue to make America great again,” Trump said early in his 80 minutes of remarks delivered in his often improvisational, stream-of-consciousness style to enthusiastic supporters.

“We’re appointing judges like, I guess — never before has anything happened like what we’re doing on great, conservative, Republican judges,” he said. The president also gave a specific shout-out to Supreme Court Justice Neil Gorsuch who, Trump said, “has been fantastic.”

Trump’s nearly hour-and-a-half-long stump speech touched on many of his recognizable talking points, including: having respect for the American flag and standing for the national anthem; having a strong military and increasing military spending; the strength of the economy and the stock market; the need for more job training for the skilled trades and more vocational schools; and his persistent claims of bias and corruption in the FBI as it has investigated Russia’s interference in the 2016 presidential election.

Just days after a meeting between the leaders of North Korea and South Korea and ahead of his planned meeting with the North’s Kim Jong Un next month, the president trumpeted his efforts to pressure the North to end its nuclear weapons program.

While he conceded he didn’t “really know” how his diplomatic efforts would turn out, he assured the crowd with, “I’ll tell you one thing: We’re not playing games.”

And answering criticism that he was engaging in nuclear brinksmanship with a volatile regime, Trump said, “No, strength is going to keep us out of nuclear war. It’s not going to get us in.”

Regarding trade and his desire to end some multilateral trade deals and negotiate new bilateral deals instead, the president explained, “I can’t let other countries take advantage of us. I can’t.”

And echoing one of his talking points on trade, Trump said he doesn’t fault other countries and world leaders for what he sees as unfair or imbalanced trade and deficits. Instead, “I blame past presidents and past leaders of our country,” he told the crowd who erupted in cheers.

The president renewed his praise of Dr. Ronny Jackson, who withdrew his nomination to be the secretary of the Department of Veterans Affairs, and his attacks on Sen. Jon Tester, D-Mont., who had led the effort to surface allegations against Jackson that doomed the nomination. Tester is up for re-election in November in a state that Trump carried in 2016.

Jackson is “a truly high-quality human being,” Trump said.

“Well, I know things about Tester that I could say, too,” the president added, “and if I said them, he’d never be elected again.”

On border security, the president seemed to suggest in an offhand way that he was willing to see the federal government shut down in order to get the level of security on the U.S.-Mexico border that he desires.

“We have to have borders and we have to have them fast. And we need security. We need the wall,” the president said. Trump explained that his administration had already obtained $1.6 billion in funding from Congress for improvements along the southern border. “We come up again on September 28th and if we don’t get border security, we’ll have no choice. We’ll close down the country.”

The president also gave a nod to rapper Kanye West who has stirred controversy by espousing his support for Trump on Twitter, a move that has made the artist a symbol of free speech and free thought in recent days on Trump-friendly Fox News.

“Kanye West gets it,” the president says after touting milestones in black and Hispanic unemployment that have been achieved during his tenure in office.

As for November and what many political observers see as a tough midterms season for the GOP, Trump juxtaposed national Democrats against many of his initiatives and policy positions.

“Nancy Pelosi and her gang, they’ve got to be voted out of office,” Trump added. 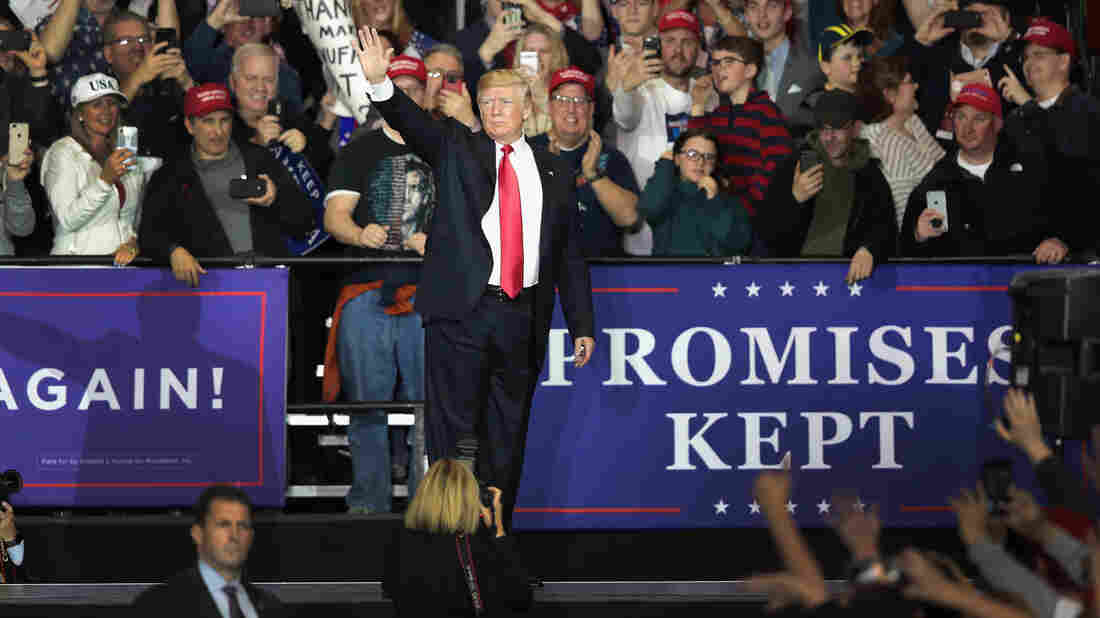 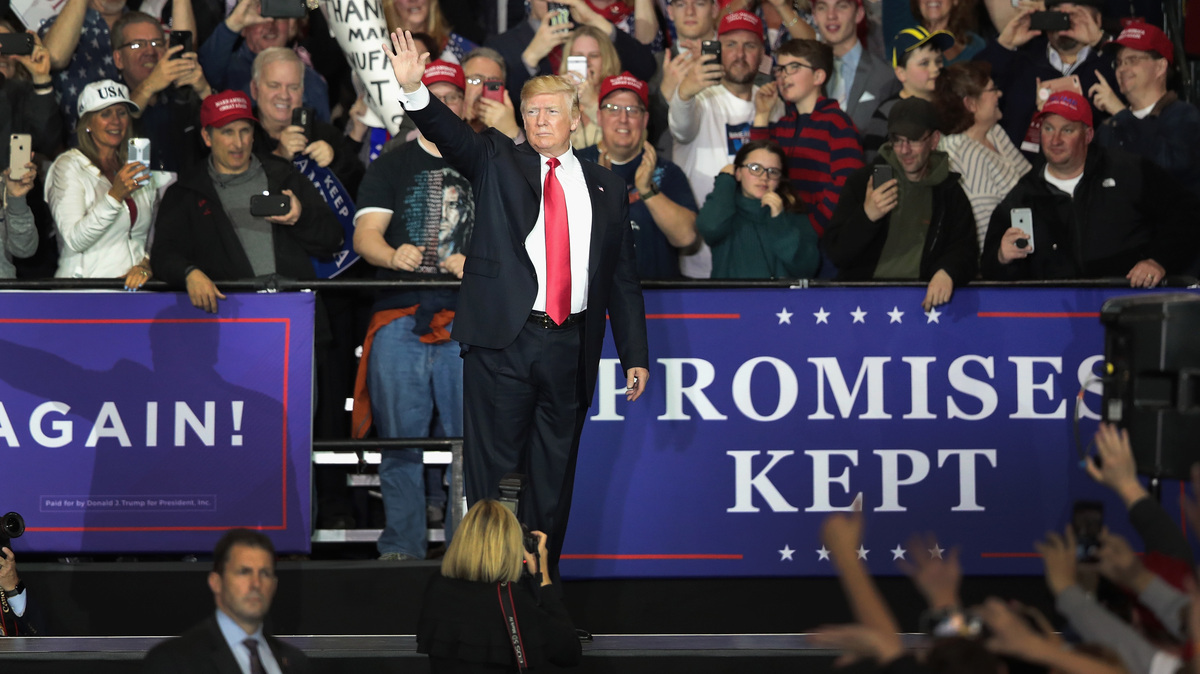 President Trump speaks to supporters during a campaign rally Saturday in in Washington Township, Mich.

The president’s rally was a hit with two supporters from Livonia, Mich., who spoke with NPR.

Bill King, a retiree, said he’s “loving” Trump so far and that he believes the president is good for the economy. King also agreed with Trump’s central message Saturday night.

“Republican voters are gonna have to show up,” King told NPR, “The left wing is jazzed up for this; they’re motivated. We have to get Republicans motivated in order to keep good things happening.” King said he still wants to see Trump’s border wall built, to have the nation’s immigration laws changed as Trump and some conservative Republicans in Congress are proposing and for Congress to pass a second round of tax cuts.

King’s wife, Gina, said she approved of Trump. “To me, he’s really proven that somebody who isn’t part of the swamp can get things done — even though he has a lot of resistance.”

Both Kings said they are frustrated with members of Congress in both parties, saying Capitol Hill is obstructing Trump and not getting enough done.

The press was the target of the president’s ire Saturday night far less than it was last year — when he skipped the same Washington, D.C., event and held a campaign rally in Harrisburg, Pa.

The president also called out “fake CNN” near the end of his remarks.

“By the way, is this better than that phony, Washington White House Correspondents’ Dinner? Is this more fun?” the president asked just before he wrapped up his speech.

The question was clearly rhetorical and the answer was obvious both to Trump and the arena full of supporters.

But if there was any doubt, the president put it to rest.

He told the crowd had he been at the dinner in the other Washington, he would’ve been forced to smile through attacks on him or face negative stories afterward about not being a good sport while being roasted at the annual gathering of D.C. journalists.

“You know, there’s no winning,” he said over cheers.