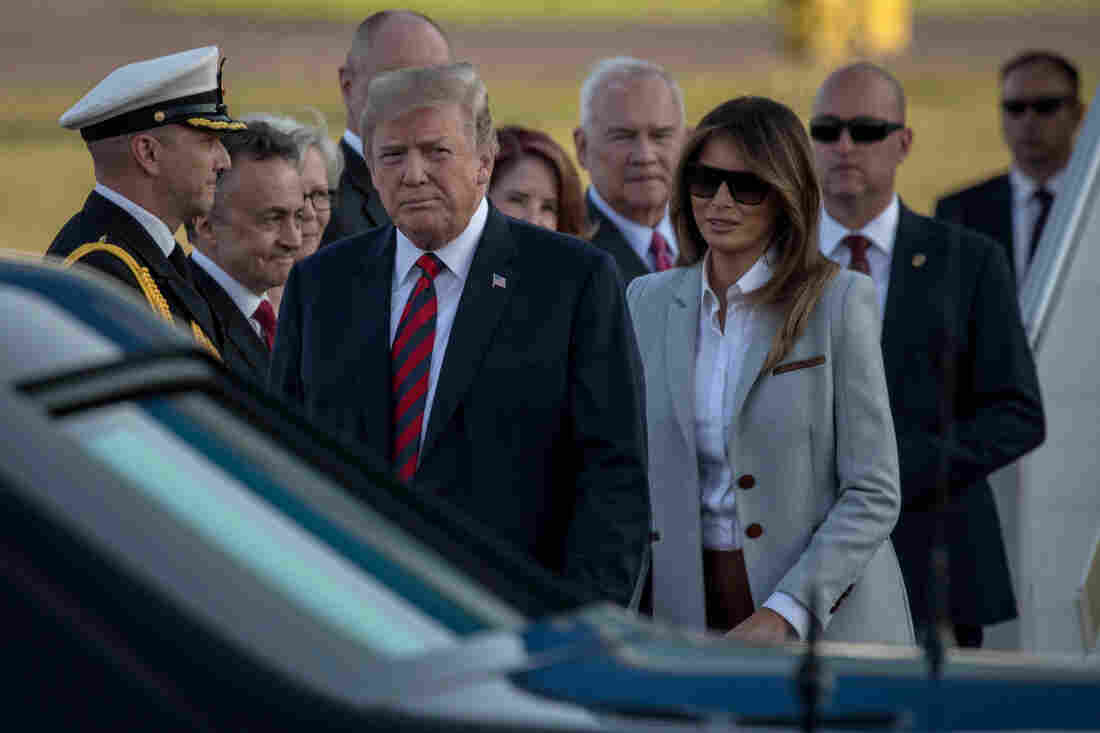 President Trump and first lady Melania Trump arrive in Helsinki, Finland, on Sunday ahead of a meeting with Russian President Vladimir Putin. Trump is under increasing pressure to confront Putin directly about special counsel Robert Mueller’s indictment of 12 Russians accused of conspiring to interfere in the 2016 election. Chris McGrath/Getty Images hide caption 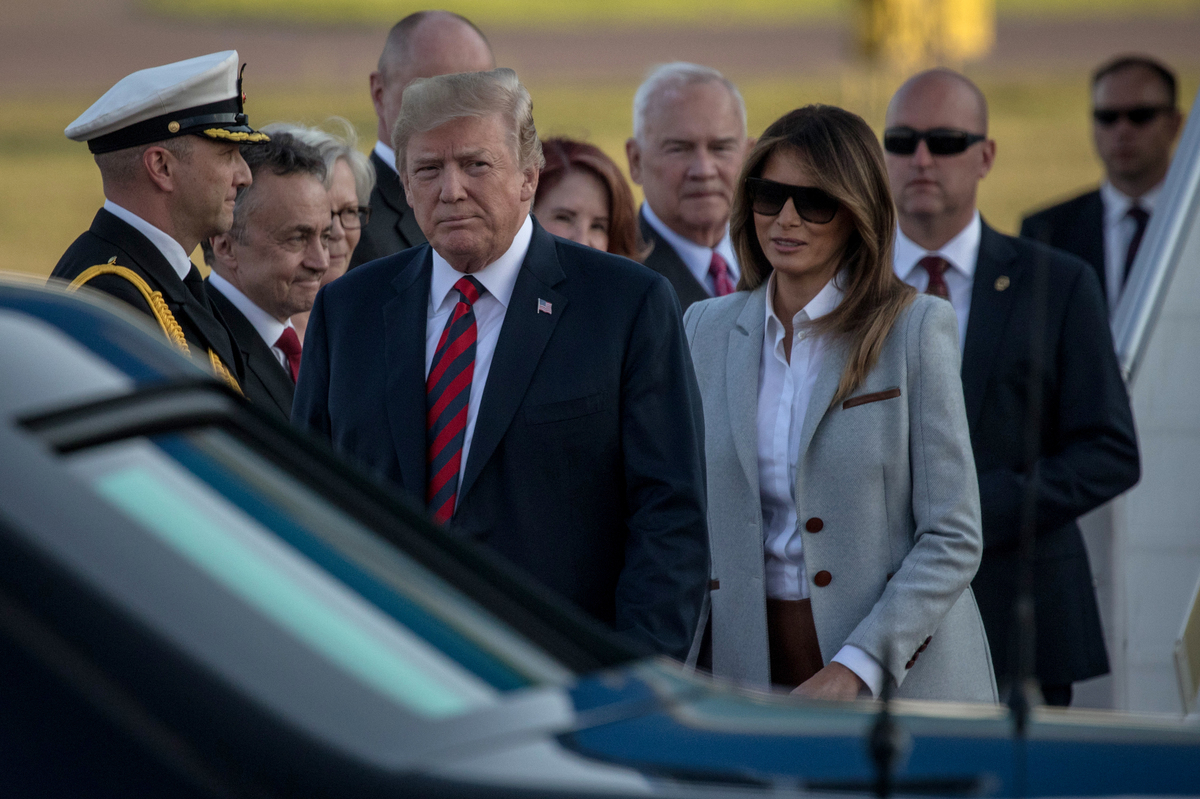 President Trump and first lady Melania Trump arrive in Helsinki, Finland, on Sunday ahead of a meeting with Russian President Vladimir Putin. Trump is under increasing pressure to confront Putin directly about special counsel Robert Mueller’s indictment of 12 Russians accused of conspiring to interfere in the 2016 election.

The meeting, in Helsinki, Finland, is the first stand-alone summit between the two leaders. Trump told reporters he would raise the issue of Russia’s role in the election, though he doesn’t expect Putin to acknowledge any wrongdoing.

“I will absolutely bring that up,” Trump said Friday, during a joint news conference with British Prime Minister Theresa May. “I don’t think you’ll have any, ‘Gee, I did it. I did it. You got me.’ There won’t be a Perry Mason here, I don’t think. But I will absolutely, firmly ask the question.”

In the past, Putin has denied any Russian involvement in the U.S. presidential contest. And Trump has argued there’s little to gain from pursuing the issue.

The indictments unveiled on Friday allege that agents from Russia’s military intelligence service, GRU, hacked into email servers used by the Democratic National Committee, along with state election systems and other targets. Embarrassing information was then passed along to WikiLeaks, which made the emails public.

In an interview that aired Sunday on CBS, Trump said it hadn’t occurred to him to ask Putin to extradite the accused agents to U.S. authorities.

No Americans were charged with knowingly taking part in the hacking scheme, although that’s a continuing subject of investigation by special counsel Robert Mueller.

Trump has repeatedly denied any collusion between his campaign and Russia, often dismissing the special counsel’s probe as a “witch hunt.” Speaking to reporters on Friday, the president acknowledged that suspicion surrounding the ongoing investigation complicates his dealings with Putin.

“It makes it very hard to do something with Russia. Anything you do, it’s always going to be, ‘Oh, Russia. He loves Russia,'” Trump said. “I love the United States. But I love getting along with Russia, and China, and other countries.”

Conciliatory with Russia, combative with NATO and EU

Trump’s conciliatory tone towards Putin is a stark contrast to his combative attitude at last week’s NATO summit, highlighting once again the president’s transactional approach to foreign policy. In his CBS interview over the weekend, Trump drew little distinction between western democracies that share history and values with the United States and authoritarian regimes in Moscow and Beijing.

“I think we have a lot of foes. I think the European Union is a foe, what they do to us in trade,” Trump said. “Russia is foe in certain respects. China is a foe economically, certainly they are a foe. But that doesn’t mean they are bad. It doesn’t mean anything. It means that they are competitive.”

Once the indictments against Russian agents were made public last week, Democrats urged Trump to cancel the summit with Putin, or at least not to meet with the Russian leader with no aides present, as planned.

“Glad-handing with Vladimir Putin on the heels of these indictments would be an insult to our democracy,” Senate minority leader Chuck Schumer, D-N.Y., said in a statement.

“Russia attacked our democracy,” added Sen. Mark Warner, D-Va., the top Democrat on the Senate Intelligence Committee. “That’s all the more reason why [Trump] must not meet one-on-one with Vladimir Putin, who, in the absence of U.S. experts or advisers will undoubtedly take full advantage of an ill-prepared President.”

Sen. Ben Sasse, R-Ne., who is frequently critical of Trump, said Russia’s election interference should not be a partisan issue.

“All patriotic Americans should understand that Putin is not America’s friend, and he is not the President’s buddy,” Sasse said in a statement. “We should stand united against Putin’s past and planned future attacks against us.”

National security adviser John Bolton anticipated this kind of criticism weeks ago when the Putin summit was announced. But he said Trump would not be deterred by what he called “political noise.”

“He judges, correctly in my view, that this bilateral summit between himself and President Putin is something he needs to do and will do, regardless of political criticism here at home,” Bolton said during a news conference in Moscow last month.

In addition to Russia’s election interference, Trump said he wants to discuss arms control with Putin, as well as the ongoing fighting in Syria and Ukraine.

“I’m not going in with high expectations but we may come out with some very surprising things,” Trump said during his U.K. news conference.

Trump downplayed his ties to Putin, saying they’ve met only a few times. The two leaders held talks on the sidelines of the G20 summit in Hamburg, Germany last year, as well as the APEC summit in Da Nang, Vietnam.

“He’s representing Russia. I’m representing the United States. So in a sense, we’re competitors,” Trump told reporters after a meeting with NATO allies in Brussels last week. “Not a question of friend or enemy. He’s not my enemy. and hopefully, someday, maybe he’ll be a friend.”

Although U.S. intelligence agencies concluded that Russia’s interference in the 2016 election was intended to help Trump and hurt his Democratic opponent, Hillary Clinton, Trump insisted he hasn’t done Moscow’s bidding as president. He pointed to his efforts to boost U.S. oil exports and increase military spending as measures that would not win any points with Putin.

Trump also expelled dozens of Russian diplomats earlier this year in response to the poisoning of a former Russian spy in the U.K. And he agreed to supply Ukraine with lethal weapons, a step that former Pres. Obama had resisted.

“I guarantee whoever is in Russia, they’re saying, ‘Oh, gee. Do we wish that Trump was not the victor in that election,'” Trump said. “We have been far tougher on Russia than anybody.”

At the same time, Trump has floated the idea of allowing Russia back into the G7, making it the G8. Russia was kicked out of the group in 2014 in response to its illegal annexation of Crimea.

Trump refused to say last week whether he was prepared to recognize Crimea as Russian territory, even though his national security adviser has said that’s not the position of the United States.

“That’s an interesting question,” Trump said in Brussels. “What will happen with Crimea from this point on? That I can’t tell you. But I’m not happy about Crimea.”

“You can’t solve problems if you’re not talking about them,” said Jon Huntsman, the U.S. ambassador to Russia in a briefing before the Trump-Putin summit. “The president hopes that a meeting can help reduce tensions and lead to constructive engagement that improves peace and security around the world.”

At the same time, Huntsman cautioned the meeting might not produce any breakthrough agreements.

“The fact that we’re having a summit at this level, at this time in history, is a deliverable in itself,” he said.