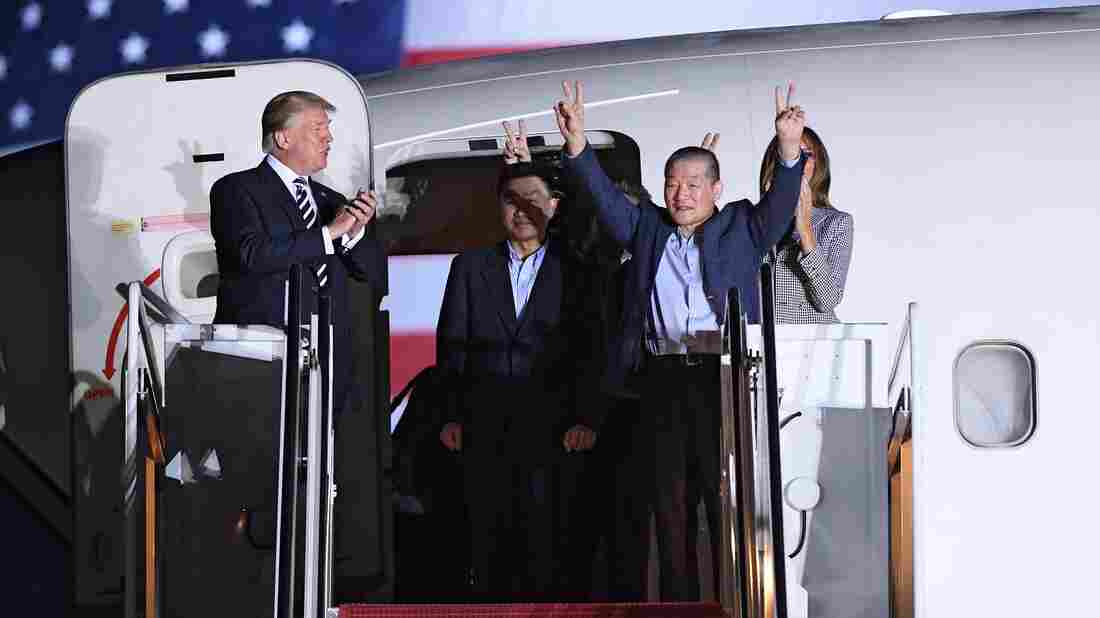 President Trump applauds as Kim Dong-chul (2nd R) gestures upon his return with Kim Hak-song (C) and Tony Kim (behind) after they were freed by North Korea, at Joint Base Andrews in Maryland. Saul Loeb/AFP/Getty Images hide caption 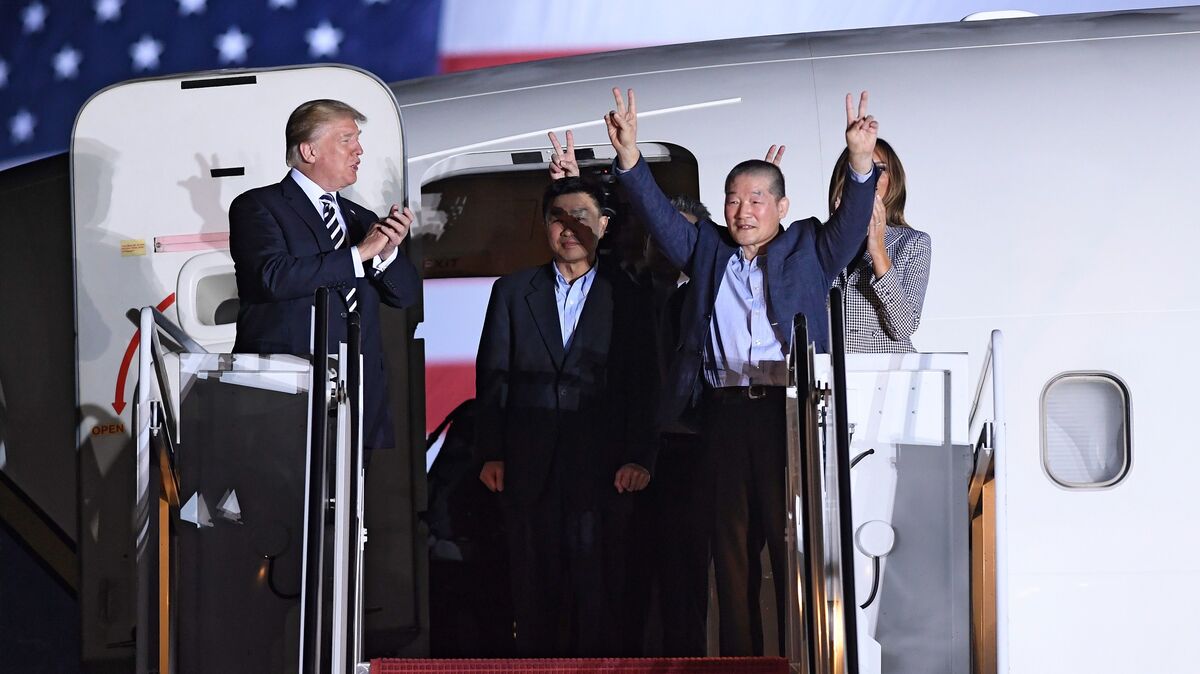 President Trump applauds as Kim Dong-chul (2nd R) gestures upon his return with Kim Hak-song (C) and Tony Kim (behind) after they were freed by North Korea, at Joint Base Andrews in Maryland.

Three American men who had been held by North Korea touched U.S. soil once again early Thursday, where they were met by President Trump, who has hailed his diplomacy with North Korean leader Kim Jong Un for winning their freedom.

The trio arrived at Andrews Air Force Base just outside of Washington, D.C. shortly after an official plane carrying Secretary of State Mike Pompeo — who negotiated the release — touched down. They met the president and First Lady Melania Trump, who boarded their plane, as well as Vice President Mike Pence, Second Lady Karen Pence and Pompeo stood at the foot of the stairs.

Shortly after, they emerged with the president, smiling and waving and to cheers from military personnel at the base.

“I want to thank Kim Jong Un,” Trump said on the tarmac. He said Kim “nice” for letting the three free before the summit, which he said would occur “in a few weeks.”

Welcoming the detainees home, he called it “a special night for these three people.”

One of the three, who appeared to be Kim Dong Chul, spoke for the group, saying “It’s like a dream and we are very, very happy.”

Asked how they were treated in North Korea, he responded through an interpreter, “in many, many ways. For me, it was hard labor, but when I was sick, they treated me.”

The jet with the three freed detainees landed at about 2:40 a.m. ET and taxied to the meeting area, where a giant American flag was suspended over the tarmac.

Earlier, North Korea announced it had released Kim Dong Chul, Kim Hak Song and Tony Kim – all held on charges of espionage. Kim Dong Chul had been jailed since 2015, while the two others were arrested separately in North Korea just over a year ago. They departed North Korea with Secretary of State Mike Pompeo for the long flight back to the United States.

In a tweet last week, Trump hinting at their impending release, said that “the past Administration has long been asking for three hostages to be released from a North Korean Labor camp, but to no avail. Stay tuned!” Two of the three – Kim Hak Song and Tony Kim — were detained during Trump’s presidency.

As we reported previously:

“Tony Kim, a U.S. citizen in his late 50s briefly taught accounting at Pyongyang University of Science and Technology, or PUST, the only privately run university in the country — funded largely by evangelical Christians in the United States and China, USA Today reports. He was accused of unspecified “hostile acts.”

Kim Hak-song also worked at PUST and was detained on a similarly vague charge of “hostile acts” against North Korea.

The third detainee, 60-something Kim Dong Chul, of Fairfax, Va., was sentenced to 10 years in prison and hard labor in April 2016.”

Exchanging prisoners for an opening with the West has been a common tactic of Pyongyang over the years. However, typically, the détente has been short lived.

Last year, North Korea released American Otto Warmbier, a university student who was detained at the Pyongyang airport in January 2016 while on a five-day tour of North Korea. He was later convicted of stealing a propaganda poster and sentenced to 15 years hard labor. However, he was released in June 2017, gravely ill and in a coma. He died soon after his return to the United States.

However, Pyongyang suddenly softened its tone, leading to a flurry of diplomacy, rare talks with South Korea last month and a planned Kim-Trump summit.

The president has hailed the thawing in relations as a diplomatic breakthrough and chalked it up to his hardline stand with Pyongyang.

The release of the Americans is seen as a goodwill gesture by North Korea ahead of those talks.

Trump confirmed the Americans’ release on Wednesday morning, saying the group was airborne.

I am pleased to inform you that Secretary of State Mike Pompeo is in the air and on his way back from North Korea with the 3 wonderful gentlemen that everyone is looking so forward to meeting. They seem to be in good health. Also, good meeting with Kim Jong Un. Date & Place set.

Later, during a Cabinet meeting, Trump said the three Americans were “fine people” and seemed to be healthy, adding, “I appreciate Kim Jong Un doing this and allowing them to go.”

For Pompeo, his visit to retrieve the trio was his second surprise trip to North Korea in recent weeks, having traveled there to visit the country’s leader in early April while he was CIA director — and before his confirmation as secretary of state.

Pompeo met with the North Korean leader for 90 minutes, flashing a fingers-crossed sign to reporters when asked about the detainees’ fate, according to The Associated Press.

“A North Korean official came to the hotel shortly after to inform Pompeo that Kim had granted amnesties to the three and that they would be released at 7 p.m. local time, according to a senior U.S. official present for the exchange. Carl Risch, the assistant secretary of state for consular affairs, and a doctor went to another hotel to pick up the men and bring them to the airport, the official said.