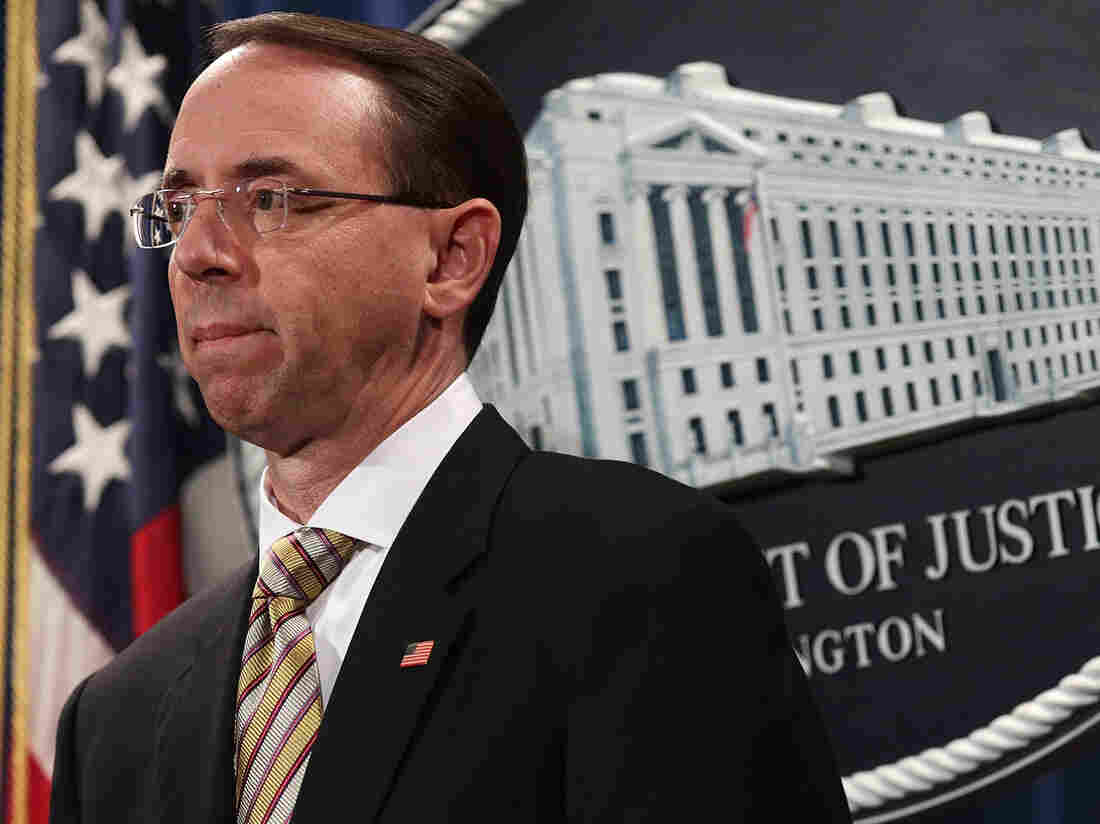 Deputy U.S. Attorney General Rod Rosenstein has agreed that the Justice Department and the FBI will meet with members of Congress who want secret information about the Russia probe. Alex Wong/Getty Images hide caption 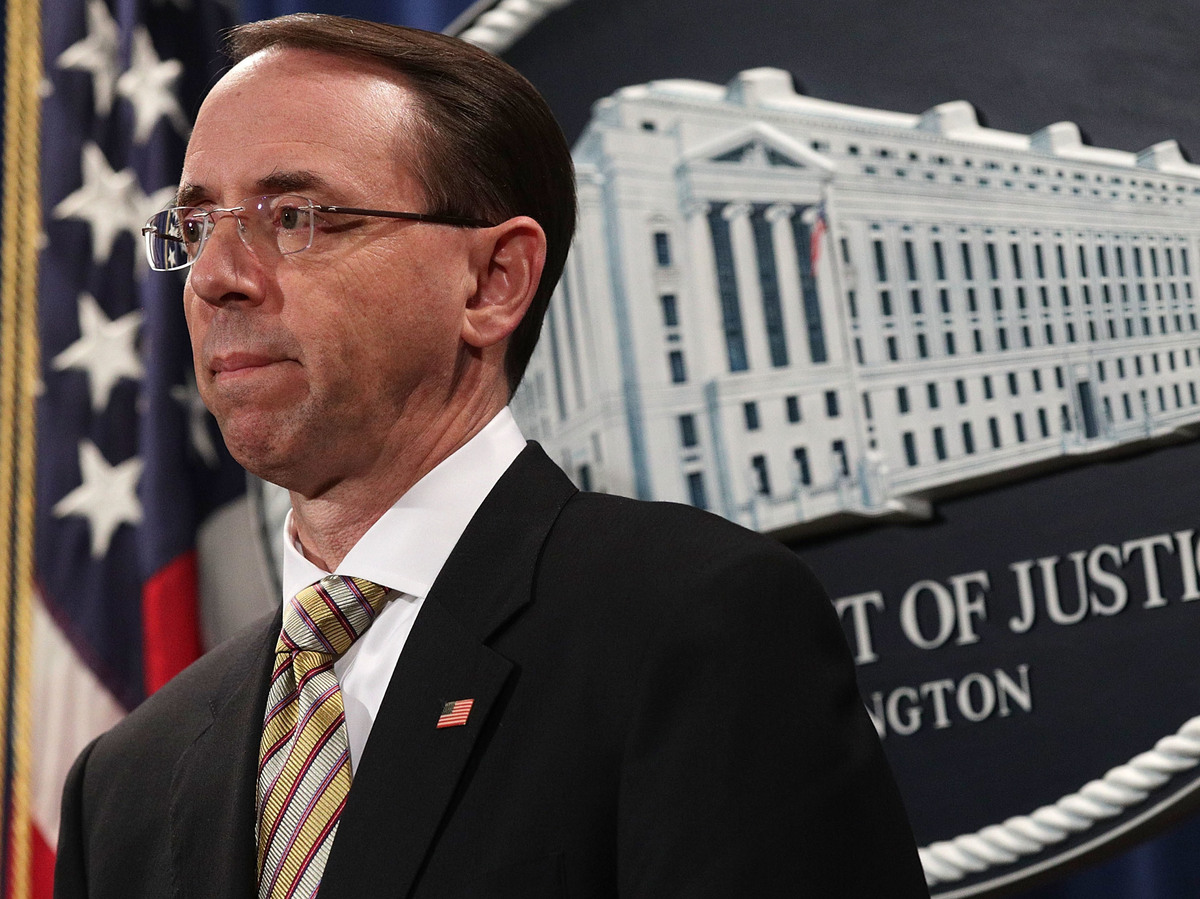 Deputy U.S. Attorney General Rod Rosenstein has agreed that the Justice Department and the FBI will meet with members of Congress who want secret information about the Russia probe.

President Trump and his allies are unleashing a new strategy against federal law enforcement that takes a page from military tactics: a pincer movement.

Trump has attacked one flank of the FBI and Justice Department by demanding an expanded investigation into the ongoing inquiry about Russia’s interference in the 2016 presidential election and whether anyone in his campaign was involved.

Trump and his supporters in Congress are expected to attack again in short order along a different line of advance, when Justice Department Inspector General Michael Horowitz releases his report about the FBI’s 2016 investigation of Hillary Clinton.

That document is expected to appear soon, potentially next week.

The preliminary findings in the report already have cost one top FBI leader his job: former Deputy Director Andrew McCabe. The release of the full document is likely to invite new calls for potential criminal charges against McCabe and possibly former FBI Director James Comey.

It isn’t clear how much the IG report could touch on the Russia investigation, which was still in its earlier stages at the time when much of the action on the Clinton case was taking place in 2016.

But Trump and Republicans want to hit DOJ and the FBI with both prongs of their assault at once to make the case that the agencies are infected with political bias and their work cannot be trusted.

The White House and its supporters have been sandblasting the Justice Department and the FBI for months; the leaders of both law enforcement agencies have steadily been giving ground. The latest rearguard action is a meeting, now under negotiation, at which the FBI could surrender highly secret information to congressional leaders about the Russia investigation.

According to reports, the FBI paid a confidential informant to meet with Trump campaign workers who had or were suspected to have contacts with foreign governments in 2016. That followed a tip via Australia’s Foreign Ministry that an American working for Trump in London had been meeting with Russian agents.

Previous charges about eavesdropping and “unmasking” were deflated, and skeptics say Trump is trying to change a story about potential wrongdoing by his campaign into one that casts doubt upon his predecessor, the Justice Department and the FBI.

Former Director of National Intelligence James Clapper told NPR on Tuesday there is a critical distinction between an investigation like the one the FBI reportedly conducted in 2016 and “spying” or “surveillance” and some other terms used lately.

“The point is: What is the objective? If the objective was, in fact, to surveil, observe the campaign to determine its political strategy or what it was trying to do to compete with the other campaign, that would not be good,” Clapper said. “But the point here was to understand what the Russians were doing to try to infiltrate and gain leverage, access, influence, whatever they were trying to do. And there’s a huge difference there.”

The president’s allies say they want to know for sure and have been demanding information about the Russia investigation from Deputy Attorney General Rod Rosenstein, who is overseeing the effort led by special counsel Robert Mueller.

“It’s really important that we conduct the proper oversight of the executive branch to make sure that power is not or has not or will not be abused,” House Speaker Paul Ryan, R-Wis., told reporters on Tuesday.

For a while, Rosenstein took a tough line, vowing that DOJ wouldn’t be “extorted,” but the battlefield shifted after the reports about the confidential informant.

Then Trump weighed in more strongly than ever with a “demand” for more information from the Justice Department, and Rosenstein acceded to it Monday. He traveled to the White House for a meeting with Trump, White House chief of staff John Kelly and FBI Director Christopher Wray.

One outcome was an acknowledgment by the Justice Department that its IG, Horowitz, will expand an inquiry he was already conducting into the ongoing Russia investigation to include its use of sources and surveillance.

For Trump’s supporters in the House, that is not good enough. They want the Justice Department to appoint a second special counsel to look into the work of the first, Robert Mueller. Attorney General Jeff Sessions has brought in additional investigators to look into the Russia case but so far has stopped short of agreeing that another special counsel is necessary.

The second outcome was a meeting that Kelly is expected to broker between Hill leaders, the Justice Department and the FBI. The precise details weren’t clear on Tuesday afternoon; people familiar with the matter said no one involved is certain exactly who might be involved or what documents Congress could get.

It wasn’t even clear whether the meeting would be only for Republican leaders and chairmen or whether minority members might also be present. Senate Minority Leader Chuck Schumer, D-N.Y., urged the Trump administration to include Democrats in whatever ultimately takes place.

If Horowitz released the Clinton email investigation IG report on Wednesday or Thursday amid this maelstrom, it could merge into the foul weather that Rosenstein and Wray are already facing and create a political superstorm.

Democrats say the pressure Trump is bringing to bear on federal law enforcement is an inappropriate overreach of his authority against a Justice Department that is supposed to be able to act independently.

“The fact that … Trump is DEMANDING the DOJ reveal confidential information about an ongoing criminal investigation is more evidence of potential abuses of power by the President,” wrote New York Rep. Jerry Nadler, ranking member on the House Judiciary Committee, on Twitter. “This is not only a threat to the rule of law, but a dangerous precedent for our democracy.”

Another Democrat, Connecticut Sen. Richard Blumenthal, said the legal and political complexities in Washington, D.C., missed the point: U.S. law enforcement and intelligence agencies must be able to protect their clandestine sources and operatives, he said.

“The review of highly classified documents in the midst of a highly charged partisan conflict raises the clear and present danger of illegal disclosure potentially catastrophic to confidential sources and operations,” Blumenthal warned.