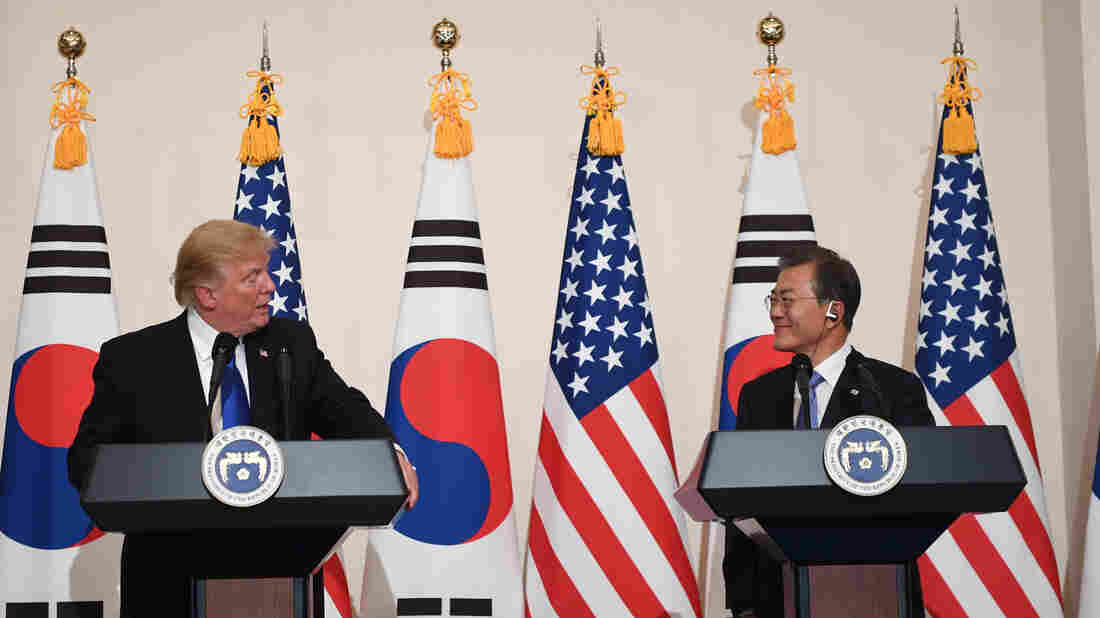 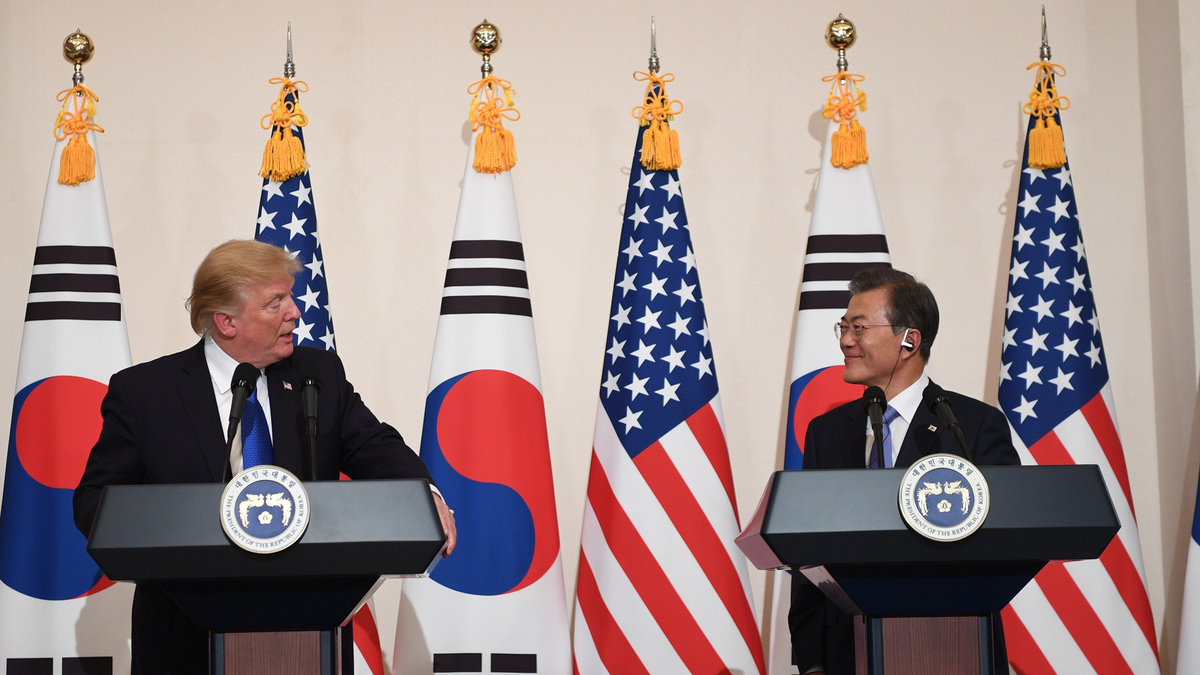 President Trump speaks beside South Korea’s President Moon Jae-In as they attend a joint press conference in Seoul on November 7, 2017.

President Trump meets at the White House Tuesday with South Korean President Moon Jae-in. The two men are partners in an effort to strip North Korea of its nuclear weapons.

The meeting is a chance for Trump and Moon to strategize before a planned summit next month in Singapore with North Korean leader Kim Jong Un.

That meeting has been called into question, after North Korea suggested it’s not willing to give up its nuclear weapons. For now, the U.S. and South Korea are proceeding on the assumption the meeting will take place.

“Anybody who’s looked at this issue for years knows that you don’t get fairytale endings with North Korea,” said Victor Cha, a Korea expert in the George W. Bush administration who was considered for a post as Trump’s ambassador to Seoul. “It tends to be a lot more difficult and rocky and dirty and suspense-filled.”

Even if the meeting between Trump and Kim does take place, the U.S. and South Korea are potentially divided over what should happen next. The Trump administration insists that North Korea must completely dismantle its nuclear program before getting any relief from economic sanctions. South Korea, on the other hand, might be willing to go along with a more phased approach, in which Pyongyang is rewarded for intermediate steps. That’s one of the issues Trump and Moon will have to discuss.

“Moon is a resourceful politician. He’s played his cards very well. But there’s just so much that could go off the rails here when and if Trump does, in fact, go to Singapore,” said Jonathan Pollack, a senior fellow at the Brookings Institution.

South Korea has embraced the Trump administration policy of maximum economic pressure towards Pyongyang, even though leaders in Seoul were wary of some of Trump’s more bellicose rhetoric.

“Whenever that discussion moved to talk of possible military action, I think that’s where the South Korean government was not on board,” Cha said.

South Korean officials have regularly praised Trump for his diplomatic prowess, even suggesting that a Nobel Peace Prize might be in his future. When North Korea’s Kim issued his surprise invitation for a summit with Trump, South Korea said the U.S. president deserved most of the credit.

“His leadership and his maximum pressure policy, together with international solidarity, brought us to this juncture,” South Korea’s National Security Director Chung Eui-yong told reporters outside the White House in March.

Trump hasn’t always been on such friendly terms with South Korea. During the 2016 presidential campaign and since, Trump has complained about what he sees as that country’s free-loading reliance on U.S. military might.

“You look at what the world is doing to us at every level, whether it’s militarily or in trade or at so many other levels,” Trump told CNN during the campaign, “the world is taking advantage of the United States.”

South Korea pays about half the cost of the 28,500 U.S. troops stationed on the peninsula. The country also picked up most of the bill for an $11 billion
expansion of a U.S. military base, 55 miles south of Seoul.

Trump is also unhappy with the U.S. trade deficit with South Korea, which topped $10 billion last year. Two months ago, the U.S. agreed on a revised trade agreement with South Korea. It limits steel imports from that country and extends a tariff on imported pickup trucks.