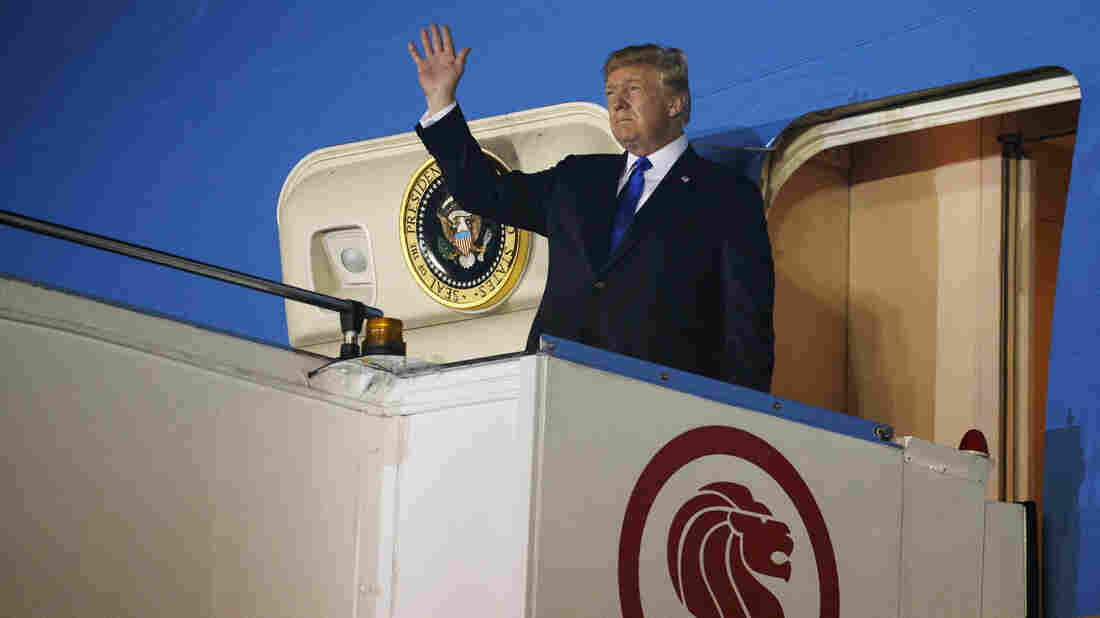 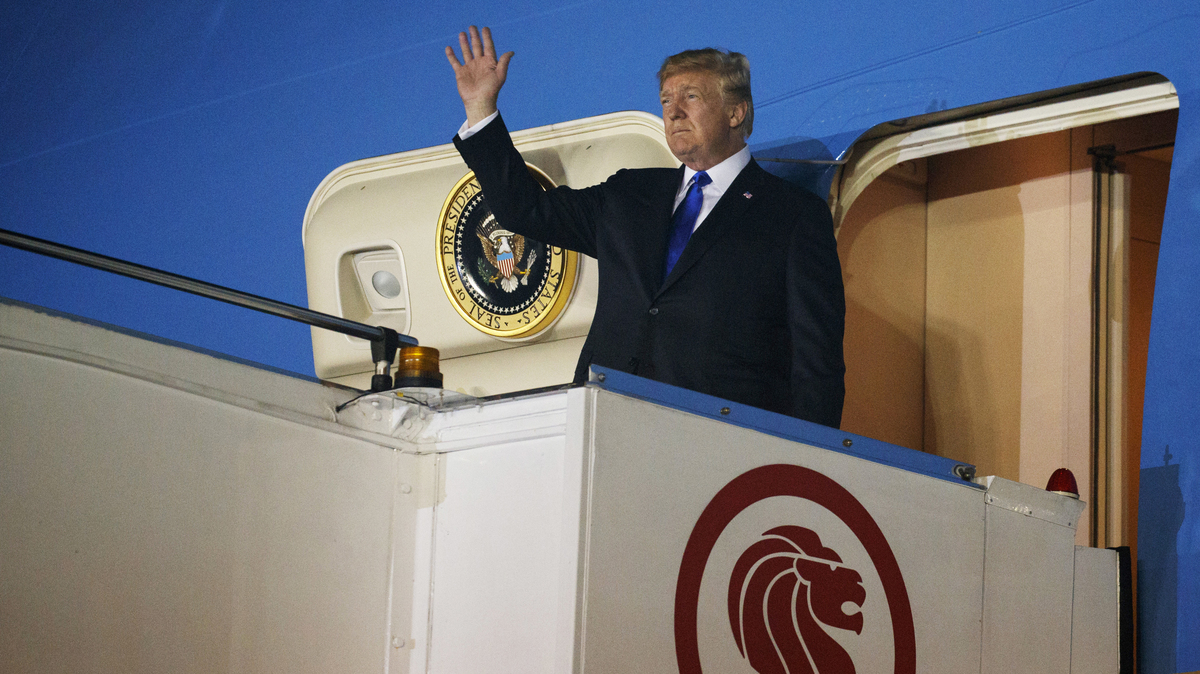 President Trump traveled to the summit — which will be the first-ever meeting between a U.S. president and a North Korean leader — from a G7 meeting in Quebec, Canada. Kim arrived on an Air China jet, NPR’s Elise Hu reports.

Aboard Air Force One en route to Singapore, Trump tweeted, “I look forward to meeting [Kim] and have a feeling that this one-time opportunity will not be wasted!”

…Create peace and great prosperity for his land. I look forward to meeting him and have a feeling that this one-time opportunity will not be wasted!

Singapore Foreign Minister Vivian Balakrishnan shared a photo that showed him Balakrishnan welcoming Kim Jong-Un to Singapore. Later, Kim met with Prime Minister Lee Hsien Loong at Lee’s office in the sprawling palace known as the Istana. A few hours after that, Balakrishnan was on hand when Trump stepped off Air Force One. 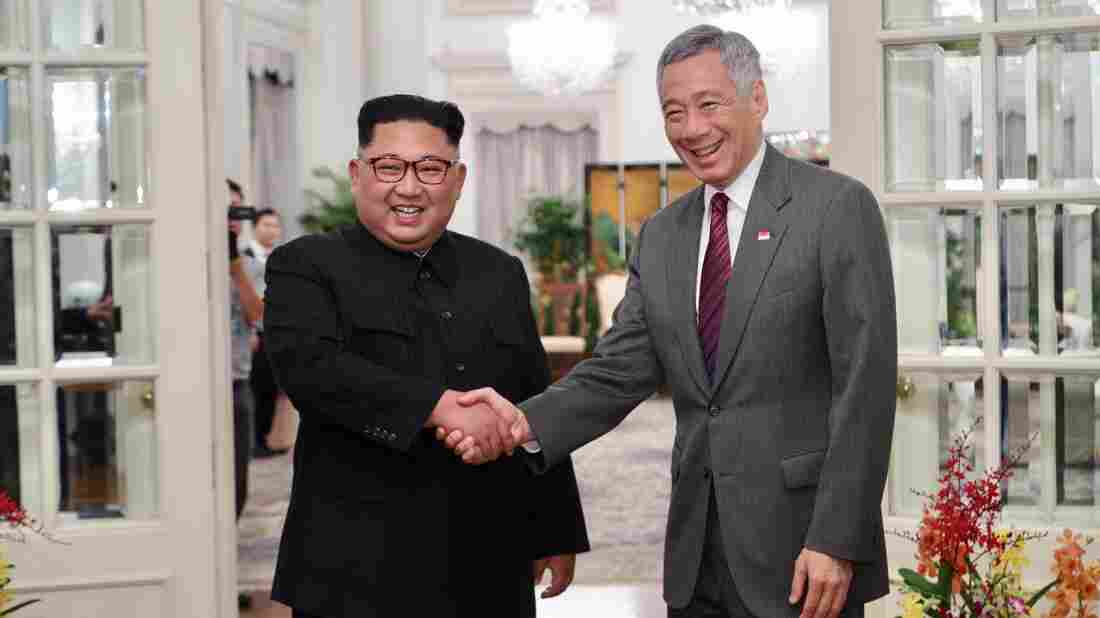 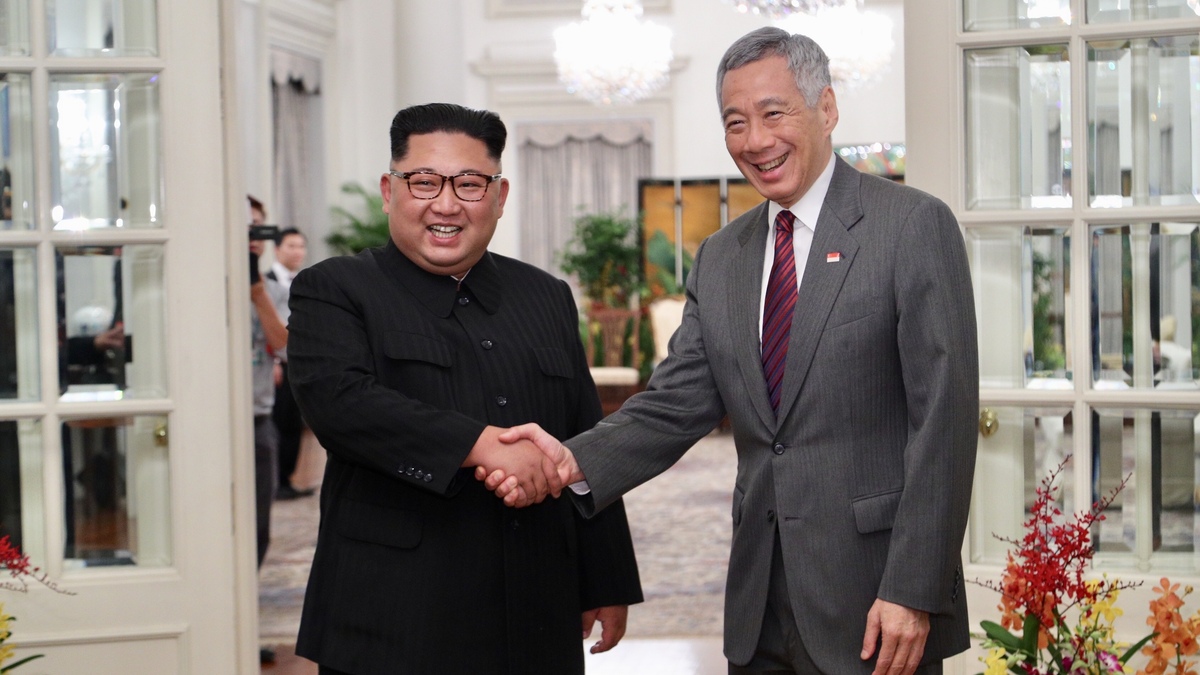 President Trump has said he will use the summit, scheduled to begin Tuesday, to push for North Korea’s denuclearization. Trump and Kim Jong-Un have both suggested they could also pursue a peace treaty to officially end the Korean War, which ceased because of an armistice signed in 1953.

It is unclear, however, under what terms North Korea would agree to in an effort to reduce its nuclear arsenal. Trump has offered few details of what a framework for that process would look like.

“We suspect it’ll be more of a pronouncement in which the two countries express interest in that direction, and then the details will get bogged down,” Sen. Jeff Merkley, D-OR and a member of the Senate Foreign Relations Committee, told NPR’s Lulu Garcia-Navarro on Weekend Edition Sunday. “So view this as … the laying of a vision, a little bit of sizzle on the steak.”

Hammering out a complete plan for North Korea’s denuclearization would be “an impossible chore” at this summit, Michael O’Hanlon of the Brookings Institution told NPR. While Kim has shown he’s willing to bargain, O’Hanlon said, “Giving up his nuclear weapons is probably going to be the last step in that process, not the first step.”

Trump arrived in Singapore after another meeting with foreign leaders — a group of close American allies. At the G7 summit in Canada and in the hours afterward, Trump railed against trade practices that he described as unfair and said he’d given U.S. representatives instructions to rescind an agreement to official communique that outlined a mutual plan to ensure “free, fair, and mutually beneficial trade.”

Based on Justin’s false statements at his news conference, and the fact that Canada is charging massive Tariffs to our U.S. farmers, workers and companies, I have instructed our U.S. Reps not to endorse the Communique as we look at Tariffs on automobiles flooding the U.S. Market!

U.S. allies are worried that Trump could upend decades of international precedent, NPR’s Mara Liasson reported on Weekend Edition Sunday. “Diplomacy requires a certain amount of trust and consistency. And that certainly wasn’t the theme of this week’s meeting at the G7.”

“[President Trump] is not going to permit any show of weakness on the trip to negotiate with North Korea,” Kudlow said on CNN’s State of the Union. “Kim must not see American weakness.”