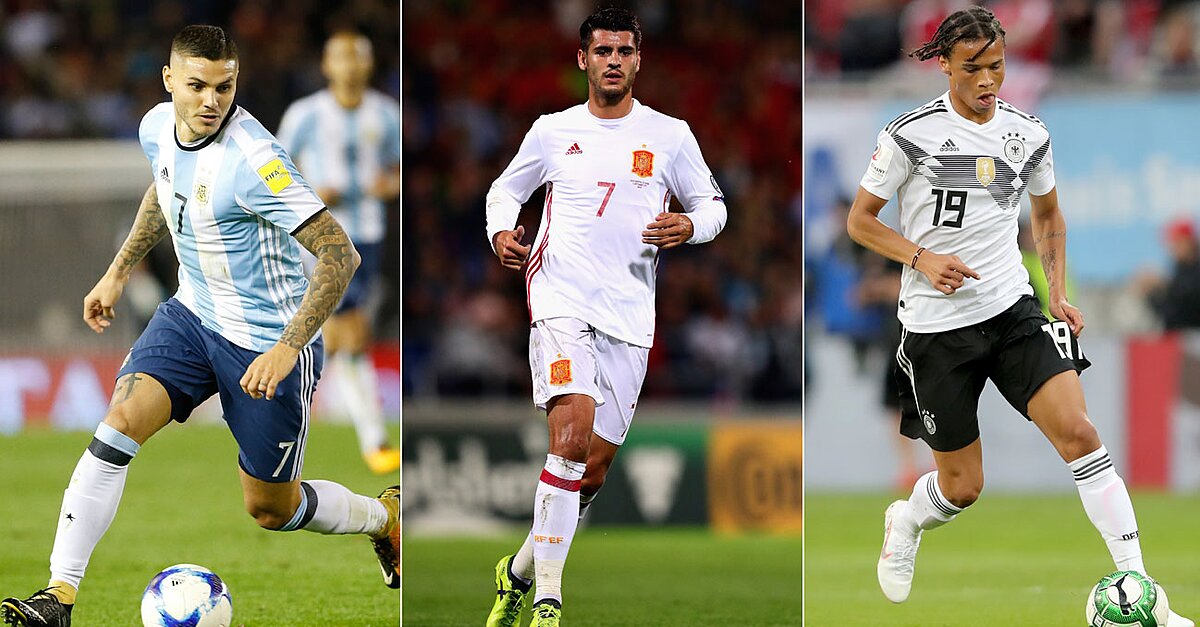 It happens every four years: Stars who probably should be representing their countries on the World Cup stage shockingly get left behind, dealing with the personal heartbreak and disappointment while still wishing their compatriots the best.

The 2018 World Cup is no different. Now that the final roster deadline has come and gone, we know officially that a cavalcade of stars will be missing out on the trip to Russia despite their respective nations’ qualification. Their exclusions have undoubtedly led to second-guessing, speculating and a whole lot of debate. To that end, we’ve compiled a full World Cup-eligible roster of 23 players who, if given a shot to compete together, would put up quite the fight on the grand stage. Of course, that’s not how these things work, but it’s fun to image how it’d play out, no?

This list won’t include players who have been solely ruled out due to injury, such as Brazil right back Dani Alves, France center back Laurent Koscielny and midfielder Dimitri Payet or Denmark forward Nicklas Bendtner (is a World Cup without Bendtner really worth watching?). It also does not include retired players who weren’t welcomed back to their national teams after missing qualification, such as Sweden legend Zlatan Ibrahimovic, or players whose nations missed the World Cup entirely.

Instead, here are the players who could be going to Russia–and some may argue should be going in place of their fellow countrymen–this summer, constructed and structured in the mold of a traditional World Cup roster:

Hart was England’s No. 1 as recently as three Three Lions games ago, while Leno is being touted for a transfer to the Premier League from Bayer Leverkusen. Their exclusions couldn’t be made for more different reasons. Hart, after having his confidence shook by Pep Guardiola, is just entirely too inconsistent to rely upon, while Leno is stuck behind a crop of talented goalkeepers that includes Manuel Neuer, Marc-Andre ter Stegen and Kevin Trapp. Both are reasonably explained, though their inclusions would not have been shocking in the least.

Neto, meanwhile, starred at Valencia this season, but he was always going to be behind Alisson and Ederson in the Brazilian pecking order. Corinthians veteran Cassio was given the nod for the No. 3 role instead.

So it appears Spain has some depth in defense! A starting back line from right to left of Bellerin, Martinez, Bartra and Alonso could be one of a World Cup contender. Instead, it’s a foursome that has the same vantage point of this World Cup as you do. Life comes at you fast (and Dani Carvajal, Gerard Pique, Sergio Ramos and Jordi Alba are also quite good at what they do).

As for the others, Sandro is Juventus’s in-demand left back, but his season wasn’t as buzzworthy as his transfer rumors are, and he also happens to be playing in the age of Marcelo. Laporte may be Man City’s most expensive signing ever (for now), but there’s no room for him on France’s roster, even after Koscielny’s injury. And while Semedo had some breakthrough moments at Barcelona, the 24-year-old right back won’t be helping Portugal in its return to tournament play after winning Euro 2016.

Sane’s exclusion, after a stellar, productive season on the wing at Manchester City, may be the biggest snub in the world. At 22, entering his prime and coming off a 10-goal, 15-assist season in the Premier League, he’s the prototype of the kind of player who breaks out on the World Cup stage. It’s downright stunning he won’t even be called upon off the bench, though Jogi Low has his reasons. His omission brought out some empathy from another famous snub of World Cup past.

Elsewhere, Can’s exclusion can be explained away by an injury that hampered him at the end of his Liverpool season–though he was part of the Reds’ Champions League final squad–while Coman was also harmed by an injury that didn’t rule him out of the competition but ruined his rhythm and kept him sidelined in the most important months leading into the World Cup.

Portugal isn’t truly in need of firepower considering it boasts Cristiano Ronaldo, Bernardo Silva and potential breakout star Goncalo Guedes, but the 21-year-old Neves displayed his penchant for the spectacular for Wolves this season and perhaps merited a trip to Russia.

Also in the center, Rabiot withdrew from France’s reserves after not earning a place on the final 23, which lets you know how he felt about Didier Deschamps’s decision-making; the talented yet mercurial Nainggolan wasn’t even included on Belgium’s provisional roster; and Julen Lopetegui ultimately decided that Fabregas’s time has come and gone for a talented, deep Spanish side.

What a group this is. Benzema has been persona non grata in French camp for a while now, so his exclusion isn’t surprising as much as it is a reminder that there’s always lingering drama behind the scenes with Les Bleus. There’s also incredible attacking depth, which means the likes of Lacazette, Martial and even Sevilla star Wissam Ben Yedder can have no place in Russia, and yet France remains one of the favorites to win it all.

Icardi’s Serie A-leading 29 goals apparently weren’t enough to force Jorge Sampaoli into trying to make things work with him, while Morata’s wastefulness in front of goal at Chelsea cost him a place for Spain.

As for Wagner, he didn’t take his omission well at all–he straight-up retired from the national team. And with Mario Gomez and Timo Werner the only out-and-out strikers included on Germany’s final roster, one may understand his frustrations. Time will tell whether Germany will regret not bringing the Bayern Munich star and Sane.

Let’s extend the list to 35, in the spirit of World Cup roster management: There’s France’s Ben Yedder, Moussa Sissoko and Mamadou Sakho (we could go on down the line in France’s insanely deep player pool); Germany’s Mario Gotze and Andre Schurrle (who only combined on the World Cup-winning goal in 2014); Brazil’s David Luiz and Fabinho; England’s Chris Smalling; Belgium’s Christian Benteke; Spain’s Pedro and Sergi Roberto; and Argentina’s Erik Lamela, just to name a few more.

There’s no shortage of quality players who will be spectators for the World Cup, and that’s always how it goes. Ultimately, it’s a numbers game (and a manager’s preference game). For the ones young enough to be in their prime years come the winter of 2022, perhaps the cards will be in their favor next time.