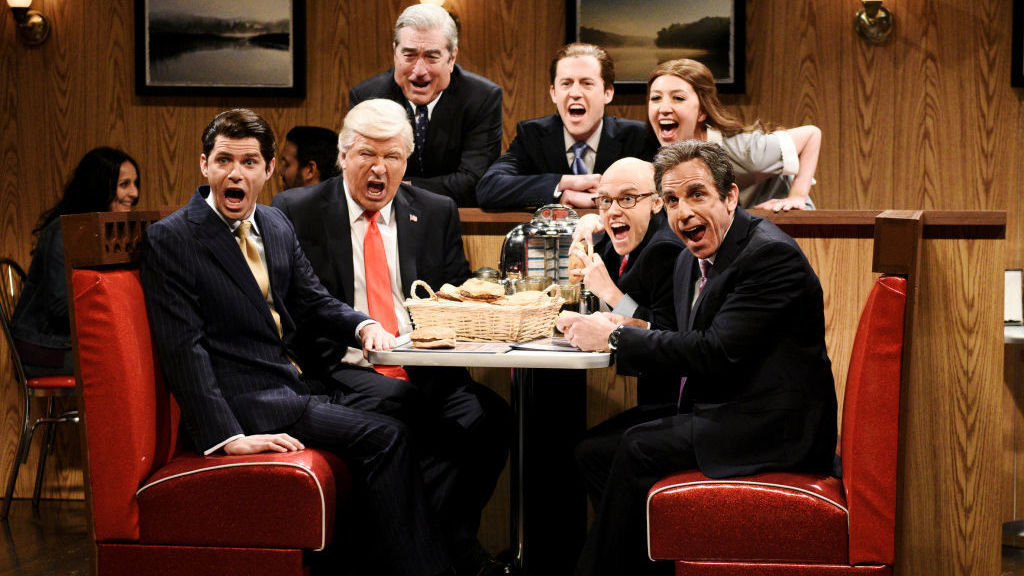 The season’s last episode of Saturday Night Live opened with a nod to Tony Soprano including Journey’s “Don’t Stop Believin'” playing on the jukebox.

President Trump, played by Alec Baldwin, was sitting alone in a New Jersey diner, just like the one on the finale of HBO’s The Sopranos, when he was joined by Kate McKinnon as Trump lawyer Rudy Giuliani, who joked he was on Fox News “like 20 times” the other night.

Ben Stiller, reprising his role as Trump’s personal lawyer Michael Cohen, joined the table and when asked how his day at work went, he replied, “really bad.” “Mostly just preparing to go to jail and stuff.”

Donald Trump Jr. played by Mikey Day arrived at the table and explains that Alex Moffat’s Eric Trump was outside trying to “parallel park” his big wheel.

Special counsel Robert Mueller, played by Robert De Niro, enters the diner and sits down but apparently Trump was the only one who could see him. It’s been one year since the investigation into Russian election interference began.

As the Mueller character walks past Trump, he gives him the menacing “I have my eyes on you” sign. And just like the last episode of The Sopranos, the scene cut to black.

It was Tina Fey’s sixth time hosting the show and her musical guest was Nicki Minaj.

During Fey’s monologue, she took questions from the star-studded audience — which included Jerry Seinfeld, asking if the show has too many celebrity cameos.

Also getting in on the cameo action was Hamilton creator and star Lin-Manuel Miranda, who appeared in a behind-the-scenes look at Fey’s new Broadway musical Mean Girls.

In the pardoy, SNL castmembers and Executive Producer Lorne Michaels snub Fey and her attempt to be in the musical.

Fey gets in a dig at Miranda for being in his own show and he responds by putting her in his Mean Girls-esque Burn Book.

Fey also revived her Sarah Palin impression in a skit about how being fired by Trump was the best thing that happened to them. John Goodman returned to play former Secretary of State Rex Tillerson.