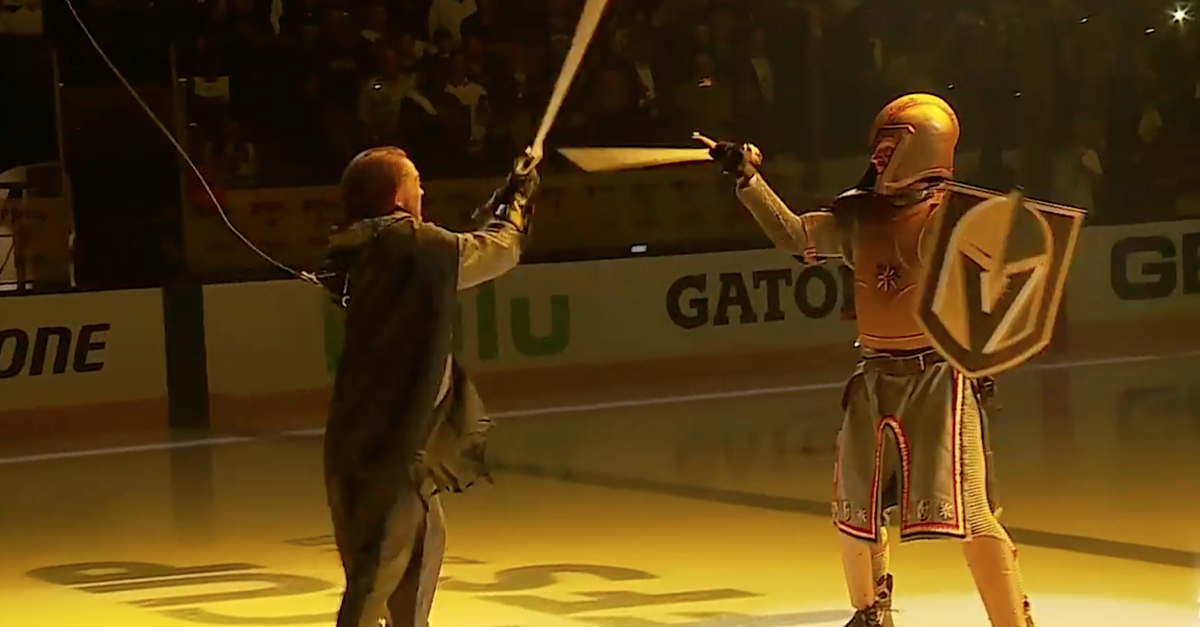 The Golden Knights need to advance to the Stanley Cup Final just so we can see what kind of intro they have planned.

The Golden Knights are so perfectly Vegas

One of the reasons hockey has been so successful in Las Vegas is that the team has made its brand of hockey fit the city’s identity. Vegas is a town of glitz and glamour, where excessive theatricality is commonplace and the Golden Knights’ intros before playoff series fit that mold.

Last night’s display included the heroic knight slicing a jet clean in half.

They had similar performances before each home game of the first and second round.

The Knights need to advance to the Stanley Cup Final just so we can see what kind of intro they have planned.

Two things about this video are true: 1. Bartolo Colon got hit in the stomach with a line drive and stopped dead; 2. He made a really good play. Just getting his feet square and in position to make a good throw when the ball bounces off him is impressive. But yes, it is also hilarious that he took a screamer off his gut and felt no ill effects. And, because this is Bartolo, he had a great sense of humor about it.

“The important thing is we won the game and I was able to get the out,” Colon told reporters after the game. “He got me on the side. It was not in the middle. And I have a big belly so I can [handle] it.”

So it won’t be a sweep

I feel like I should make some mention of the Warriors-Rockets game from last night, even though Houston won easily. Steph Curry didn’t look fully healthy as he continues to heal from a knee injury, and even though Steve Kerr laughed off questions about Curry’s health, you have to be at least a little concerned.

The Warriors rolled in Game 1, leading some to wonder if this would be a pretty easy series for them. If Curry isn’t himself, Golden State could really be in trouble.

It’s not as though Houston’s stars were their usual selves, either. James Harden and Chris Paul were a combined 4-of-20 from three, but the Rockets got big performances from P.J. Tucker and Eric Gordon, which is what makes this a little scary for the Warriors.

An Illinois woman thought she found a stray puppy and brought it to the vet. It was a coyote. … This photo of Nick Foles and his daughter after the Super Bowl was chosen as photo of the year by the Hall of Fame. … Hippos sometimes poop so much it kills all the fish in the river. … I don’t want to spoil the twist in this kidnapping story but you should read it. … These high schoolers in Wisconsin had a senior prank so creative even the cops gave props. … Italian soccer icon Gianluigi Buffon is leaving Juventus but isn’t yet set on retiring. … Flight attendants asked if there was a doctor on the plane and the U.S. Surgeon General just happened to be there.

Sorry for the convenience

For those of you who don’t get the reference:

What a pair of saves!

I thought his identity was supposed to be a secret

Take notes, Marchand. This is how you annoy a player without being a jerk.

As dirty a hit as you’ll ever see

This is from a college football game in Japan, where the coach of the red team reportedly told his players to commit penalties. (The coach denies it.) Three of the team’s preseason games have been canceled as a result.

This has to be staged, right?

Hot Clicks is everything you need to know in the world of sports and pop culture, ready for you to read right when you get to your desk in the morning. for Email dan.gartland@simail.com with any feedback or ping me on Twitter. Click here for previous editions of Hot Clicks. Visit our Extra Mustard page throughout each day for more offbeat sports stories.