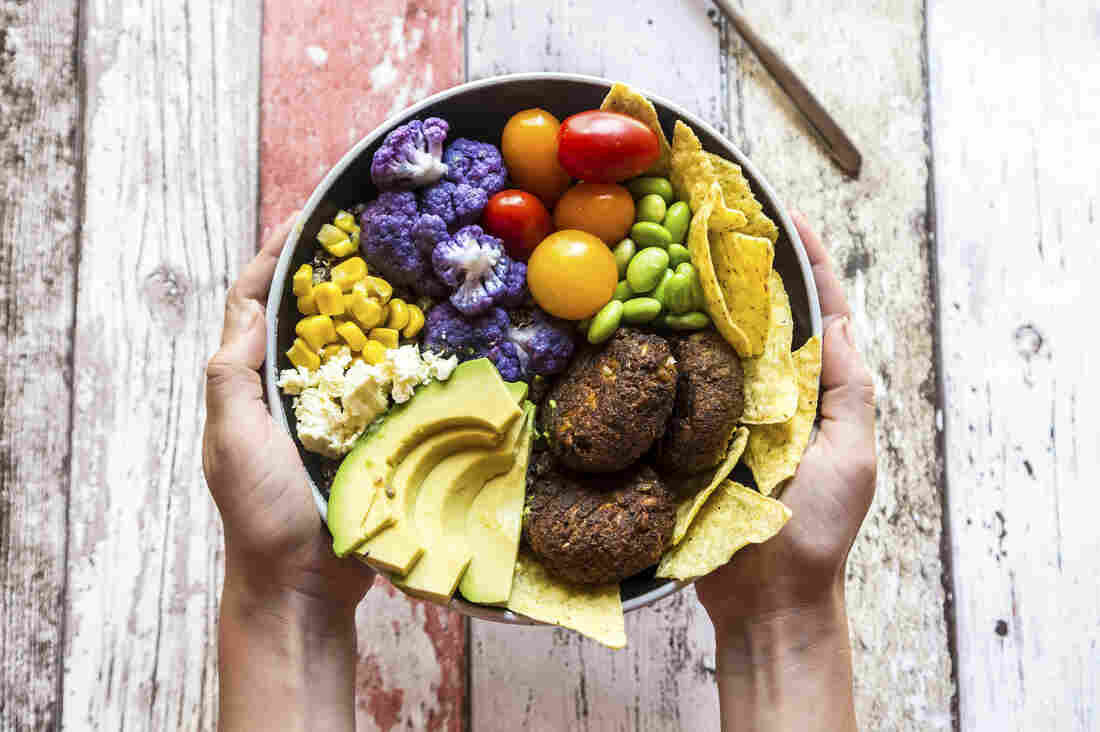 To help protect the planet and promote good health, people should eat less than 1 ounce of red meat a day and limit poultry and milk, too. That’s according to a new report from some of the top names in nutrition science. People should instead consume more nuts, fruits and vegetables, legumes, and whole grains, the report says. The strict recommended limits on meat are getting pushback. Westend61/Getty Images/Westend61 hide caption

What we eat – and how our food is produced – is becoming increasingly politicized.

Why? More people are connecting the dots between diet and health – not just personal health, but also the health of the planet. And the central thesis that has emerged is this: If we eat less meat, it’s better for both.

So, how much less? A new, headline-grabbing report — compiled by some of the top names in nutrition science — has come up with a recommended target: Eat less than half an ounce of red meat per day. That works out to about 3.5 ounces — or a single serving of red meat — per week. And it’s far less red meat than Americans currently consume on average: between an estimated 2 and 3 ounces per day.

Here’s the environmental argument: Agriculture is responsible for up to 30 percent of greenhouse gas emissions globally, and much of the emissions come from red meat production. A lot of land and water are needed to grow the grains to feed the livestock. (About one-third of all the grain produced globally is used as animal feed.)

And, as the World Resources Institute estimates, producing beef uses 20 times the land and emits 20 times the emissions as producing beans, per gram of protein. By one estimate, if people in the U.S. switched from beef to beans, this alone could get the U.S. more than halfway to the greenhouse gas reductions goals set during the Obama administration.

“Many environmental systems and processes are pushed beyond safe boundaries by food production,” concludes the new EAT-Lancet Commission report. And in order to feed the estimated 10 billion people that will inhabit the planet by 2050, “a global transformation of the food system is urgently needed.”

But climate health is not human health, and at a time when competing food tribes (think Paleo versus vegan) cling to polar-opposite conclusions about what makes a healthy diet, the recommendations put forth in this report were bound to stir controversy and raise the ire of the meat and animal-agriculture industries. The report also calls for strict limits on consumption of other animal products, recommending less than an ounce of poultry and 9 ounces of milk per day.

“The [EAT-Lancet] Commission’s radical recommendations to drastically limit meat and dairy consumption would have serious, negative consequences for the health of people and the planet,” writes Kay Johnson Smith, president and CEO of the Animal Agriculture Alliance. The group has released its own analysis in response to the EAT report that concludes that meat and dairy provide “unmatched nutrition for healthy bodies, brains and bones.”

The industry isn’t alone in its endorsement of meat. Some of the popular diets of the day, from Paleo to keto, are meat-centric. And promoters of carnivorous diets, such as Mark Sisson and Shawn Baker, who is trained as an orthopedic surgeon, have lots of followers, some of whom share their anecdotes of losing weight and gaining energy as a result of these diets.

We also hear about celebrities celebrated for their physiques who’ve gone Paleo – or at least tried it. But, beautiful bodies aside, how might a meat-centric diet influence long-term health?

“We looked at all the evidence on diet and health” and determined red meat should be limited “to less than an ounce per day — or about a hamburger a week,” says Dr. Walter Willet, a professor of nutrition and epidemiology at Harvard T.H. Chan School of Public Health and the lead author of the EAT-Lancet Commission’s report. “This may seem a little extreme to many Americans, but this is actually in line with what the traditional Mediterranean diet was when the Greeks were the healthiest people in the world,” Willett told me.

The report concludes that “high risks of cardiovascular disease and other outcomes associated with high consumption of red meat are probably partly due to multiple food constituents of animal sources of protein” — including saturated fat, heat-induced carcinogens and heme iron.

And, just as important as cutting back on meat, Willett says, is what you replace it with. The Commission’s report concludes that people should eat more nuts, fruits, vegetables and legumes, such as beans, peas and lentils.

“It’s all about the replacement,” Willett says. “If we replace red meat with a lot of white starch, [such as] white rice, white bread, potatoes and sugar – then that’s not going to be a win.” (As we’ve reported in our Life Kit podcast on healthy eating, Americans eat way too many of these refined carbs.) Willett points to a study that found people who substitute plant-based protein (such as nuts and beans) for animal protein have a lower risk of death from heart disease.

And the EAT-Lancet Commission report concludes that if people around the globe shifted to this diet pattern — eating less red meat, refined grains and sugar (compared with what is currently consumed in places such as the U.S.) and more healthful foods such as fruits, vegetables and legumes — it could prevent an estimated 11 million premature deaths per year.

The pushback against the EAT-Lancet Commission study is that much of the science linking red meat to disease is a little squishy. That’s because it’s hard to tease apart the independent effect that meat may have on our health. People who eat red meat also have many other habits and dietary choices that simultaneously influence their health, too. There are so many confounding factors.

But there is one area where the science is clearer: the link between processed meats and health risks. Dr. Dariush Mozaffarian, dean of the Friedman School of Nutrition Science and Policy at Tufts University, has reviewed the evidence and concludes that processed meats — such as bacon, hot dogs and deli meats — are linked to a higher risk of heart disease and Type 2 diabetes. “The major factor seems to be all the preservatives and the processing — those do not seem to be good for our body,” Mozaffarian says.

And, overall, the commission’s conclusions align with what many health experts have been saying for a while: A healthy pattern of eating is one that encompasses a broad array of foods — including fruits, vegetables, whole grains, legumes, healthy fats and nuts and seeds (which Mozaffarian calls “life-giving foods,” because they contain the nutrients needed to sustain new plant life.) There’s evidence that a shift towards these foods — and away from salt, sugar and processed meats — can help protect good health.

But even if the debate over how much red meat is OK for us goes on and on, there does seem to be the beginning of a shift underway. More Americans are open to the idea of plant-based alternatives. Plant-based meat sales are growing and now exceed $3.7 billion.

The EAT-Lancet Commission report was funded by a grant from the Wellcome Trust and independently peer reviewed before publication.