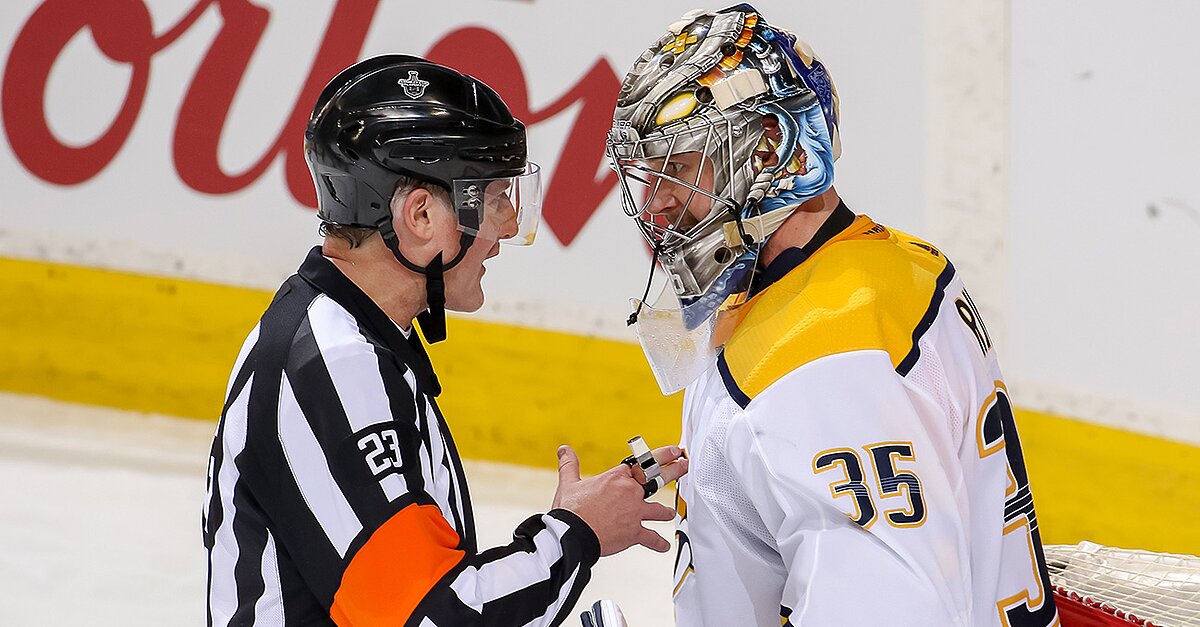 One time I saw a Reiki healing ceremony directed at a Triple Crown winner named Seattle Slew, and that wasn’t even close to being the strangest (and most hilarious) thing I have seen in my days hanging around sports. That title, I fear, was locked up 30 years ago last Friday, in a hallway in Meadowlands Arena. The Boston Bruins had just squashed the New Jersey Devils 6-1 to take a 2-1 lead in the Stanley Cup conference final series. I was writing a column for the Boston Herald back then, and I was standing in the crowded corridor about halfway between the entrance to the ice surface and the locker rooms.

New Jersey coach Jim Schoenfeld was firmly of the opinion that he’d just been hosed in his own building. He stood waiting for the officiating crew to skate off, and he homed in on referee Don Koharski. From where I stood, I couldn’t see the initial encounter. (Later I learned that Koharski had stumbled stepping from the carpeted bench area onto the concrete of the hallway, and that he believed Schoenfeld had pushed him.) All I could see was a strange melee of striped shirts and blue suits, Schoenfeld’s blazing red hair bobbed above everything. The roiling knot of people caromed in my general direction, and then Schoenfeld shouted the single most surreal insult I’d ever heard directed at anyone, a combination of two-fisted vehemence and second-grade contempt that was so damned Canadian that it should’ve been emblazoned immediately and forever on the northern end of the Peace Bridge in Fort Erie.

To this day, the deep and wide absurdity of this having been the summit of a coach’s towering rage cracks me up, at least in part because what came next was an extended vaudeville that involved the entire National Hockey League. Schoenfeld was suspended for the next game, but only for several hours, because the Devils found a judge who issued a restraining order that blocked the suspension. Believing that Schoenfeld had assaulted Koharski, the officiating crew initiated a wildcat job action, refusing to work if Schoenfeld coached that night. Instead, the game – the playoff game – was officiated by three guys who, if memory serves, ran a skating rink some place in New York. They were, of course, terrible. At one point, they simply gave up calling offsides. New Jersey won this public farce and tied the series.

All of this was complicated by the fact that nobody could find John Ziegler, the putative commissioner of the NHL. His league literally was falling apart and Ziegler, whom few people ever saw at an NHL game anyway, was AWOL. (Rumor had it that he was attending some sort of weird family emergency in London.) Ziegler finally surfaced at a bizarre press conference in Boston before Game 5. The late Red Fisher of the Montreal Gazette asked Ziegler how many NHL games he’d seen in the previous year. Ziegler refused to answer him. The playoffs resumed. The Bruins won the series and the whole business became immortalized as the prime example of the long-held suspicion that hockey was a beautiful game presided over by wombats.

(How immortal was it? Four years later, Wayne’s World, the movie version of Mike Myers’s Saturday Night Live skit about two hockey-loving party dudes from suburban Chicago, hit theaters. Several scenes took place at the fictitious Stan Mikita’s Donuts. The policeman on duty was named Officer Koharski. I swear I was the only person in the theater who laughed.)

This all came to mind again because, apparently to celebrate the 30th anniversary of Have Another Donut Gate, the NHL is having problems with its officiating again. Several games in this year’s playoffs have been marred by calls ranging from the questionable to the utterly grotesque. The most recent example came during Game 4 of the series between Boston and Tampa Bay. With eight minutes left, and the Bruins clinging to a one-goal lead, Boston’s Charlie McAvoy simply was tackled by the Lightning’s Nikita Kucherov. There was no whistle. The puck bounced around until it reached Tampa’s Steven Stamkos, who blew it past Bruin goalie Tuukka Rask to tie the game that the Lightning eventually would win in overtime on the way to beating the Bruins in five games.

Virtually everybody watching the game knew that Kucherov had held McAvoy. The NBC studio crew, most notably Jeremy Roenick, was aghast. The Bruins said only that they thought a penalty should have been called, but they refused to use it as an excuse, because that’s the way hockey works. And, if you Google “Stanley Cup bad officiating,” you’ll see entries from nearly each of the past 10 years. (Whatever you do, don’t Google “NHL rigged 2017,” you’ll go down a rabbit hole and never find your way back.) And, with Boston’s Brad Marchand now out of the playoffs, refining the NHL’s rules on licking your opponent can wait until the league meetings. (To me, that’s the kind of thing for which instigating the altercation was invented.) Nevertheless, for whatever reason, the officiating in these playoffs seems to have come unstrung with conspicuous regularity.

For example, we’ve had two goals scored while goalies were dealing with equipment failures. Nashville’s Pekka Rinne had his mask knocked askew and nobody noticed until Winnipeg had scored. And, on another scoring play, the luckless Rask was unable to get the officials to notice a) that the goal had come off its moorings, and b) that the blade had come off one of his skates.

Up the ranks, the situation is no better. In the third game of the series between Washington and Pittsburgh, Tom Wilson of the Capitals went upside the head of Pittsburgh’s Zach Aston-Reese, breaking the Penguin player’s jaw. There was no penalty called. Instead, Wilson got a three-game suspension after the league office looked at the video. This deft maneuver left everyone angry and, worse than that, everyone had a right to be. Washington could rightly ask how can a play cost someone three games–Wilson missed only two–when it didn’t cost the player two minutes during the game. Meanwhile, Pittsburgh could rightly wonder what Wilson would have to have done to Aston-Reese to draw the attention of the referees working that game.

Part of the attention and televised micromanaging undoubtedly has to do with the increased technological ability of the American and Canadian people to yell about stuff they see on TV and other platforms–occasionally repeatedly. And, to be entirely fair, hockey is not an easy game to officiate. It is fast and it is hard, and the players are bigger and faster than they’ve ever been, which is a problem for referees in almost any sport. In addition, like the NFL, the NHL is under a microscope regarding the long-term consequences of repeated head injuries. It is making up a new and more sensible protocol on heavy hits to the head virtually on the fly. But what’s drawing attention now is the fact that ordinary calls are being made with stunning inconsistency, while the more unusual ones–like Rask’s skate-blade–appear to be baffling the officials on the scene.

Replay complicates matters, but it’s not the major culprit that it occasionally is made out to be. Like any tool, it works only if used properly, and, god knows, it probably should’ve caught the moment at which Tampa’s Victor Hedman cut his own chin and Boston’s David Pastrnak took the rap and got sent off. (This was like something out of the WWE.) There clearly needs to be better coordination between the officials on the ice and the officials back at league headquarters watching the videos. But, basically, everybody needs to calm down a bit.

It’s a superheated atmosphere during the playoffs anyway, and the attention is louder and wider than it’s ever been. More people in more places are paying attention; the NHL still stands a non-zero chance of having the Stanley Cup contested between Nashville and Las Vegas. You can hardly blame the league and its acolytes for having a touch of stage fright having stepped onto a radically expanding stage. Every mistake is magnified and every gripe and grumble, amplified. That’s just the way things go. You ride with it and you correct the mistakes and, as the NBA has done, you find the peace that comes with the knowledge that having people outraged at those mistakes is a lot better than nobody paying attention at all. And then, at last, you can kick back and enjoy the donut.