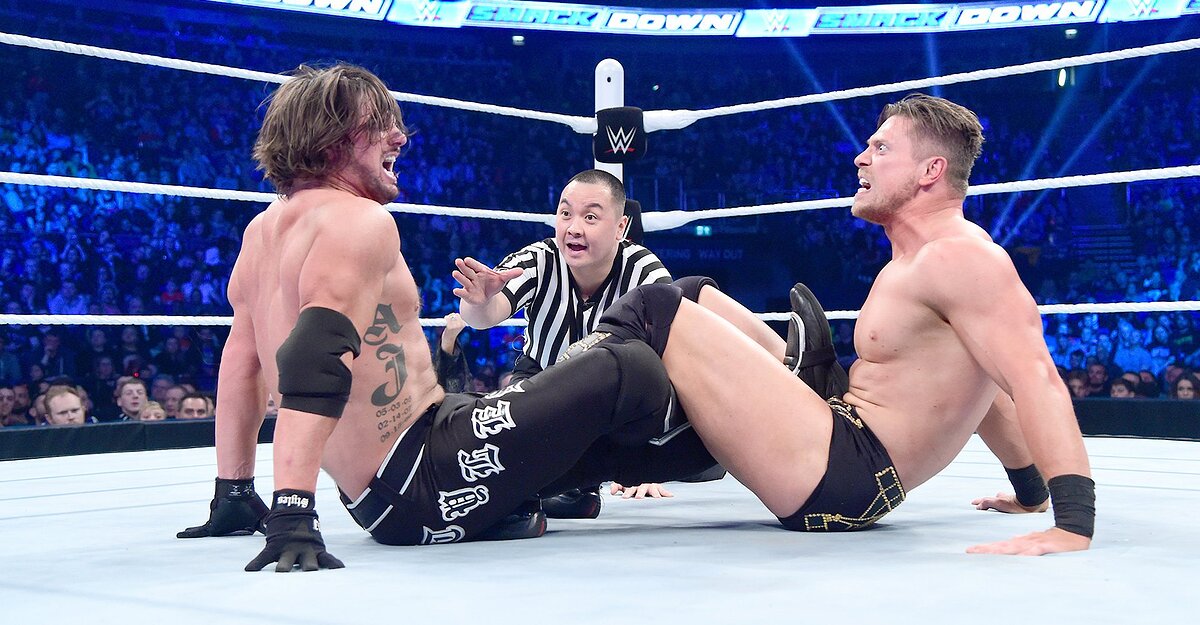 SI.com’s Week in Wrestling is published every Wednesday and provides beneath the surface coverage of the business of pro wrestling.

News of the Week: The Miz’s quest for the WWE title

Include The Miz among the wrestling cognoscenti upset that the WWE title match between champion AJ Styles and challenger Shinsuke Nakamura did not close out this past Sunday’s Backlash pay per view.

The Miz even has his own opinion on how to correct the issue: In order to restore honor to the WWE championship, he explained, The Miz needs to be WWE champion.

“My goal is to make the WWE championship as relevant and prestigious as it should be,” said The Miz, who won his qualifying match last night on SmackDown to enter into the Money in the Bank match in June for a shot at the title. “Do I think AJ Styles is doing a terrific job as WWE champion? Absolutely.

“But that WWE championship should be in the main event of every single WWE pay per view. It upsets me when I see that it is not.”

The Miz spoke at length with Sports Illustrated about his championship title pursuits in a story that is set to run this Friday on SI.com. Mike “The Miz” Mizanin, 37, had just engaged in a “Red Nose Day” event at Newark Speedway Academies in New Jersey, discussing ways to end child poverty. The issue is especially meaningful to The Miz, as a large portion of the WWE audience is comprised of children and he and wife Maryse are the parents of a newborn daughter, Monroe Sky Mizanin.

Many wrestling fans may scoff at the idea of Miz defeating Styles, arguably the most elite pro wrestler in the world, but the former eight-time Intercontinental champion explained that his next reign as world champion is inevitable, and that the inevitable inevitably occurs.

“My goal is to not only win the Money in the Bank contract, cash it in and become WWE champion,” said The Miz. “I want to put that title back where it belongs: the main event.”

Styles and Lesnar Highlight the Problem With Two Titles

Two world champions is one major problem, but the current WWE title structure is necessary when one of the champions only appears part-time.

Had this brand split happened during the 1990s during the birth of the “Attitude Era”, Vince McMahon would have needed to explain to Steve Austin that he would be one champion, while another wrestler wrestling on another night would also be pushed equally and be looked at as his equal. Had that occurred, the “Texas Rattlesnake” would not have responded kindly.

Different weight classes separate competitors in mixed martial arts, but wrestling is unique because a promotion needs to make its champion the face of the organization. You can only have one face of the franchise, yet for WWE, the largest wrestling entity in the world, there are somehow two.

The problem was further highlighted at Backlash. Brock Lesnar is currently MIA from the company with a part-time schedule, but AJ Styles—who lost to Lesnar at this past November’s Survivor Series pay per view, which, in theory, would signify that Lesnar’s Universal belt is WWE’s most prestigious title—did not even fight in the main event at Backlash.

The idea that Styles did not even close out this past Sunday’s Backlash pay per view is hard to stomach, and the matter is further compounded by the fact that a double groin shot-leading-to-a-double-count-out was the inane finish for Styles in his title match against Shinsuke Nakamura.

Ultimately, this two champion structure is a necessity when Brock Lesnar is one of the two world champions, but the lack of importance given to the WWE title is jarring.

Lesnar is a special attraction, no longer someone who should be world champ. Once Lesnar drops the belt, it would be best for business if WWE returned to a unified world championship title.

Until then, the two titles will remain, with one title clearly more significant than the other.

• WWE’s Greatest Royal Rumble show from Saudi Arabia is still generating headlines, many of which are negative.

There is a vocal opposition from people who believe WWE should not be in business with a nation that conducts public executions, with a spot for public beheadings in Riyadh known grimly as “Chop Chop Square.” There were 130 documented executions in Saudi Arabia in 2017, the majority of which were carried out by beheading. (The U.S. performed 23 executions in the same year.)

There are concrete differences between the customs in Saudi Arabia and the rest of the Western world. Jim Ross noted on his “Jim Ross Report” podcast that men armed with machine guns walked with the announcers to the broadcast table, which certainly did not happen this past Sunday in Newark, New Jersey, at Backlash.

WWE, led by Triple H, has noted that the opportunity to work in Saudi Arabia is an opportunity to effect change in another part of the world. WWE takes pride in its role as a global juggernaut. The deal with Saudi Arabia’s sports authority is also a certified money-maker.

So, is this deal a legitimate chance to extend its brand into another part of the world, or more about the money? The deal is for 10 years, and it will be telling to see how the relationship evolves.

• Daniel Bryan and Rusev wrestled an entertaining main event last night on SmackDown. The two should eventually combine for an entertaining prolonged feud, and I liked the call to have Rusev pick up the win and the spot in the Money in the Bank ladder match as Bryan should steer clear from the world title picture for as long as possible.

An interesting route for WWE on SmackDown is to explore a sit-down interview with Bryan, which could be a combination of tense-yet-interesting if hosted by Corey Graves. Raw tried something similar this week, airing a sit-down Renee Young interview with Bobby Lashley that jumped off track as Lashley told childhood stories about his sisters.

• Chris Jericho’s return this past weekend to New Japan Pro Wrestling reinforced how Jericho plays a distinctly different character in New Japan than he does in WWE.

Jericho returned to NJPW at the Wrestling Dontaku show in Fukuoka, Japan, jumping the guardrail to attack IWGP Intercontinental champion Tetsuya Naito. Jericho was wearing the mask of Bushi, who is one of Naito’s running mates in the Los Ingobernables de Japon faction, then unmasked to reveal his identity as he beat down and bloodied Naito.

Jericho’s list-making persona in WWE is smart because it relates to a wide-ranging audience. The older fan base already respects and enjoys Jericho for his wide body of work in the ring that has spanned the past two-and-a-half decades, and he is also able to connect with an even wider, more casual audience through gimmicks like the “List of Jericho.” The New Japan version of Jericho is an assassin who even looks more maniacal and is intent on leaving a wake of destruction in the ring.

Jericho’s new “Lista Ingobernables de Jericho” t-shirt is another example of how well he knows his fanbase. His approach highlights Jericho’s versatility as much as his intelligence. WWE is sports-entertainment, so Jericho makes his act entertaining. New Japan’s foundation is its pro wrestling, so Jericho shows off his ability to be a technically-sound savage in the ring.

Tanahashi, who grew up admiring “The Heartbreak Kid” Shawn Michaels and shares some similarities with his in-ring style, brings out the best in Okada.

The last time the two squared off was in the summer of 2016 during the G1 Climax when the match ended in a 30-minute draw. That match ended with Tanahashi hitting his High Fly Flow on Okada, which is what happened again at the 30-minute mark of the Wrestling Dontaku match this past weekend. New Japan takes such pride in its wrestling, and this moment serves as a primary example of how wrestling is treated like a sport that is entertaining in New Japan instead of sports entertainment.

The Bullet Club storyline was also on display at Wrestling Dontaku. Cody Rhodes and Kenny Omega still strongly oppose the other running the Bullet Club. Omega was just announced as Okada’s next opponent, with the fourth installment of their memorable feud set for June 9 at New Japan’s Dominion show.

The first three Omega-Okada matches were must-see affairs, and the fourth will be no different. The presence of Rhodes, however, looms large and will most certainly be a factor that costs Omega his chance at the historic achievement of winning the IWGP heavyweight title.

• Mick Foley made a memorable appearance at the PCW Ultra show this past Friday in Wilmington, California.

The sight of Foley standing beside Pentagon at the end of the show made me wish the “Hardcore Legend” was still physically active in the ring.

• Coming attractions: Kane—aka Glenn Jacobs—spoke with Sports Illustrated about his campaign for mayor in Knox County, Tennessee, in a story that will run Thursday on SI.com.

• Something to Wrestle with Bruce Prichard and co-host Conrad Thompson returns this Friday at noon ET with a new podcast, with a close look at the creation, development, and run of the Brother Love character.

“This is episode 100, so it’s very special to us,” said Thompson. “We’ll go knee deep into Brother Love, the character that put Bruce on the map, and even discuss his magazine cover for the WWF. We’ve never really spent a lot of time talking about Brother Love, so what better way to celebrate our 100th episode than talking about Bruce’s character. We’ll also roll out a special thank you for our listeners, and we’ll finally post the 1992 Royal Rumble podcast on Saturday as an additional thank you.”

Thompson also hosts “83 Weeks” with former WCW president Eric Bischoff, which examined the infamous “Fingerpoke of Doom” with Hulk Hogan and Kevin Nash on this past week’s episode.

“Bischoff was obviously making decisions based on the information he had at the time, but I still disagree with the decision,” said Thompson. “His goal was to shake things up and not be predictable because they were losing to WWE. I understand why he wanted to give people a surprise, which worked when Lux Luger showed up and Hulk Hogan turned heel, but I don’t see why this was the only option.”

Next week’s show will be of particular interest to World Championship Wrestling fans, as Bischoff and Thompson will explore Bret Hart’s disappointing tenure in WCW.

“We’ll cover Bret’s whole run in WCW,” said Thompson. “Bret has been very critical of his time in WCW and even of Eric’s character.”

Thompson and Prichard also reunite this week as part of their “Something Else to Wrestle” series on the WWE Network, which will re-examine the origin of the “Million Dollar Man” character for Ted DiBiase and the similarities to WWE CEO Vince McMahon.

“This is a Vince McMahon episode,” said Thompson. “We have the infamous plane story [with McMahon paying someone a wad of hundreds to put out a cigarette], but we’ll also a look at DiBiase’s run and the story of the Million Dollar belt. The highlight will be examining those original ‘Million Dollar Man’ vignettes that we remember so well, since Bruce was a big part of putting those together.”

Monday would have been Owen Hart’s 53rd birthday.