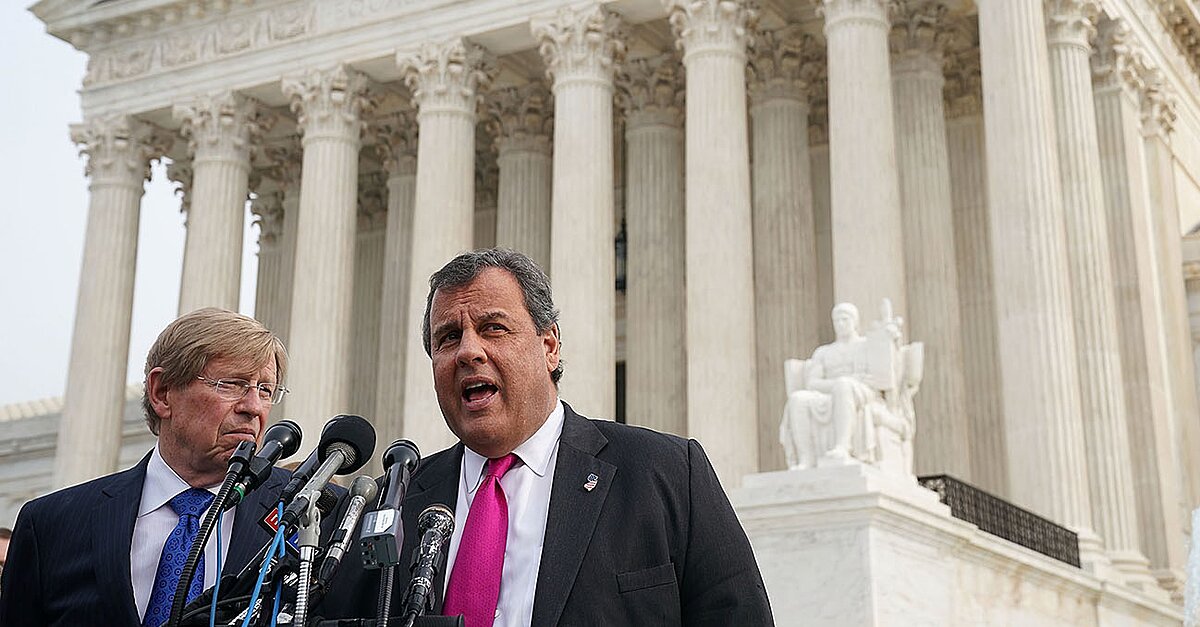 Though the Professional and Amateur Sports Protection Act was overturned by the Supreme Court Monday, revoking a federal ban on sports gambling, each state has to pass a bill to legalize betting within its borders.

The Supreme Court ruled PASPA was unconstitutional by a 6–3 margin. Justice Breyer, one of the dissenters, agreed in part with the majority. The 1992 law made exceptions for Nevada—which could allow wagering on individual games—Oregon, Delaware and Montana.

Some states have passed such legislation, like West Virginia and Pennsylvania. Other states are nowhere close. One research firm estimated that 32 states would allow legalized sports gambling within five years after the federal ban was overturned.

Below is an assessment of sports betting’s future in all 50 states, and how much progress—or not—legislators have made in the push for legalization.

Alabama: A daily fantasy sports bill died in the state Senate in March, and the state did not join New Jersey in its efforts at the Supreme Court. No bills have been introduced for the regulation or legalization of general sports betting.

Alaska: No bills have been introduced for the legalization of gambling, and any law would have to repeal the state’s statutes against sports wagering.

Arkansas: Daily fantasy sports were legalized in 2017. But there’s been no legislative efforts on general sports wagering.

California: A dispute and a looming lawsuit between tribes and the legislature makes a sports betting bill unlikely. Bills to legalize sports betting have been introduced in session since 2015, though they have yet to make significant progress.

Colorado: Colorado legalized daily fantasy in 2016, with college games an exception. While no legislation has been introduced, Eilers & Krejcik Gaming, an industry group, estimates the state could legalize sports betting within two years.

Connecticut: The legislature passed a law in 2017 to allow for the study of regulations on gambling. While the state lottery said it’s ready to start sports betting, a formal sports betting bill was given little chance by the house speaker.

Delaware: Delaware already has legalized sports gambling through its state lottery, but bets were limited to parlays on pro football. An effort to expand it in 2009 was stopped by a lawsuit by the NCAA and the four major sport leagues. Governor John Carney is reportedly working on releasing a plan shortly to offer bets on all professional and college sports.

Florida: A recent deal between the legislature and the Seminole Tribe means that revenue sharing payments will continue, stoking talks of a special session dedicated to gaming. Six counties have held referendums regarding slot machines. A looming vote on a constitutional amendment could give the state less authority over gaming decisions. No formal sports gambling bill has been introduced.

Georgia: No bills have been introduced, and daily fantasy is not allowed. There’s been little action in the state.

Hawaii: A 2017 bill would have established a commission to analyze the possibility of gaming in the state, but it didn’t get to a vote. Daily fantasy was ruled as illegal gambling by the attorney general.

Idaho: Idaho forced both FanDuel and Draft Kings out of the state, and there have been no bills introduced for general gambling.

Illinois: Illinois has proposed a number of bills for the legalization gaming statewide. Former NFL linebacker Napoleon Harris—now a state senator—introduced the Sports Wagering Act, offering a 1% “integrity fee” which would pay sports leagues 1% of all wagering. Another bill, introduced by the president pro tempore of the Senate, legalizes sports wagering, but the proposed legislation doesn’t say who would regulate it. Top NBA and MLB officials have already testified. Three bills did not pass a May 3 deadline by the Gaming Committee, and the assembly adjourns in June.

Indiana: The state has introduced a few bills for gambling legalization, and legislators worked with MLB and the NBA for input on one bill. The leagues would receive a 1% integrity fee. The head of the state’s casino association said 2019 was the goal. The NCAA, based in Indianapolis, is a roadblock.

Iowa: A sports gambling bill passed a House committee, but an April 17 legislative deadline passed with no further action.

Kansas: A number of bills have been introduced, and there been been hearings, but the legislative session ended in early May. Two bills didn’t get out of committee.

Kentucky: A few bills have been introduced, but nothing has passed or gained much traction.

Louisiana: A daily fantasy regulation bill passed a House committee, but a pure sports gambling bill was stopped in the Senate. The session closes in early June.

Maine: The state passed a daily fantasy bill in 2017, but hasn’t done much on the legalized gambling front.

Maryland: A sports betting bill passed the state house in March, but stalled in the Senate before the legislature adjourned in April. The bill called for a November referendum for voters. Next year is a possibility.

Massachusetts: The state’s gaming commission said in February that companies working within the three state casinos are interested in sports betting. A bill to study the possibility of online sports betting has been introduced. DraftKings is based in Boston.

Michigan: A bill with a sports betting provision passed a House committee, but language in Michigan’s constitution could make passage tricky. Tribal groups have lobbied against it.

Minnesota: Rep. Pat Garofalo, chairman of a jobs committee, has pushed for a sports betting bill, but a separate fantasy sports bill failed in the House in late April. The legislative session ends next week.

Mississippi: A 2016 law set for the regulation of daily fantasy was modified to allow the Gaming Commission to regulate sports betting. With PASPA overturned, gambling could start soon after a public review process, according to state representative Scott DeLano.

Missouri: There are a number of bills up for consideration, but one of the bill’s authors said passage will be tough, and that Kansas would pass a bill first.

Montana: Montana already has a form of sports betting legalized, focusing on a fantasy-style pool for football and auto racing. Daily fantasy, though, is currently illegal.

Nebraska: No bills have been introduced, but the state signed an amicus brief in support of New Jersey’s efforts at the court.

Nevada: Like always, gambling is legal in Nevada and nothing has to change.

New Hampshire: New Hampshire has a daily fantasy law on the books, but no larger legislative effort.

New Jersey: With the decision, New Jersey can offer sports betting at its tracks and casinos. William Hill, a bookmaker, has already set up a sports book at the track at Monmouth Park, and the Borgata in Atlantic City announced plans last November for a $7 million sportsbook.

New Mexico: No laws have been introduced, and a report by Eilers & Krejick estimated that New Mexico could take up to a decade to offer betting legislation.

New York: A 2013 constitutional amendment could allow sports betting at commercial casinos, but not at racetracks. A number of bills have been introduced, and one has advanced in the Senate, although there’s been less action in the House. The legislative session ends in late June.

North Carolina: No legislation has been introduced, and there’s been little chatter of attempts to do so.

North Dakota: North Dakota signed an amicus brief in support of New Jersey, but no legislation is in motion.

Ohio: Ohio passed a fantasy sports bill late last year, but nothing has been introduced on the larger gambling front.

Oklahoma: An Oklahoma law that initially had sports betting language in it was passed in April, but the final bill excluded sports betting, and instead permitted an expansion of casino games.

Oregon: Sports gambling in Oregon is already legal, but betting on pro football was nixed in 2005 to allow for the NCAA tournament in Portland.

Rhode Island: A bill to authorize sports wagering—except on state college teams—has been introduced but hasn’t moved past committee. The state included revenue of $23.5 million from sports gambling in the budget for the fiscal year starting in July. In the proposal, betting would be available at two casinos. A spokesman for the governor told reporters that the state is looking at vendors to help launch betting by the fall.

South Carolina: A bill has been introduced, but legislators have said nothing will happen in an election year.

South Dakota: No bills have been introduced, but the state’s revenue department has recommended the state begin to take steps to prepare for gambling. A change in the state constitution would be needed.

Tennessee: No bill has been introduced, and little action has taken place.

Utah: Of all states, Utah might be the least likely to allow sports betting. Anti-gambling is written into the state constitution, and the state doesn’t even have a lottery.

Vermont: No bills have been introduced, but Eiljers & Krejick predicted Vermont could offer gambling within five years.

Virginia: No legislation has been introduced, but daily fantasy is legal.

Washington: No legislation has been introduced, and a few weeks ago, the state arrested four people in connection with an illegal gambling network. The state does authorize, however, the playing of squares‚ similar to those at a Super Bowl party. The state restricts the configuration of those boards.

West Virginia: The West Virginia Sports Lottery Wagering Act became law in March. Once PASPA is overturned, the state’s five gaming facilities will pay $100,000 for the right to host gambling. Both MLB and the NBA lobbied hard against it in Charleston.

Wisconsin: No bills have been introduced, but the state did join New Jersey in an amicus brief.

Wyoming: No bills have been introduced, but the state did sign the amicus brief.