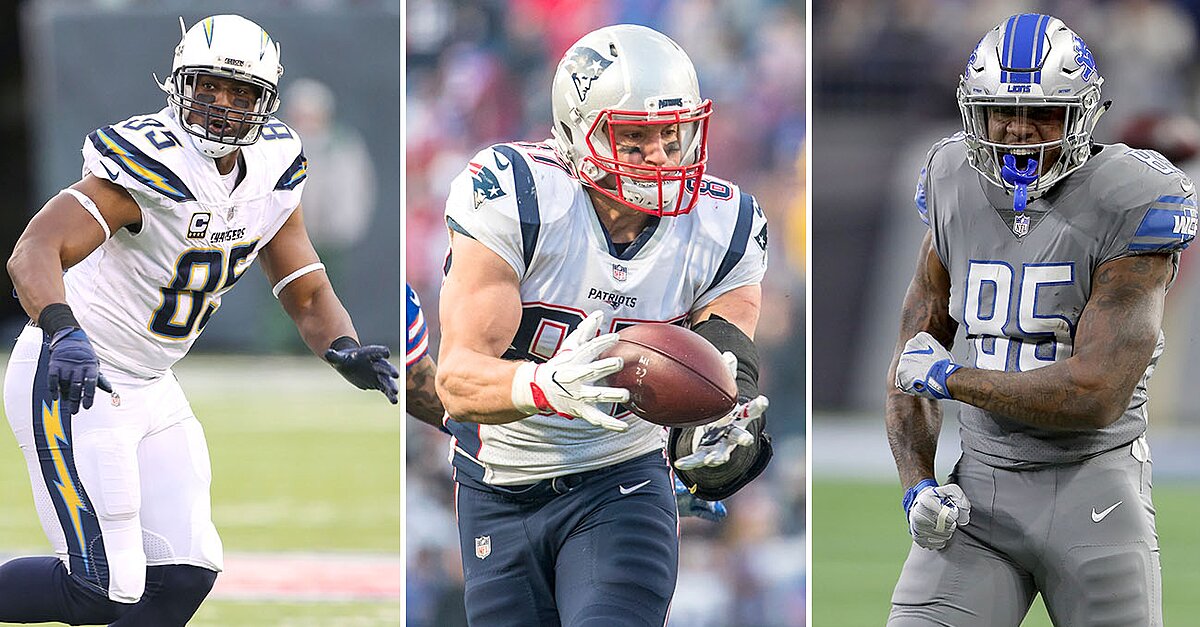 Hunter Henry tore his ACL, and suddenly Antonio Gates didn’t look so old anymore. With Henry, their rising third-year starter, out for the year, the Chargers have every reason to bring back Gates, the recently dismissed 15-year veteran. Not only is he familiar with the system, but he’s the best tight end available on the market. Even if Gates returns, L.A. has needs at this position. Henry played a major role last season with Gates on the roster, and Chargers offensive coordinator Ken Whisenhunt likes to employ multiple tight ends. From a receiving standpoint, the best option for filling Henry’s void might be last year’s first-round pick, 220-pound wideout Mike Williams. But making Williams the western version of the Jets’ Quincy Enunwa would still diminish L.A.’s ground game schematically. There’s no way around it: Henry’s loss is a big one.

If Gates signs, that robs us of a fascinating debate five years from now: Who should get into the Hall of Fame first, Gates or Jason Witten? Canton voters try to enshrine players from different positions each year. In February there was shock among some when Ray Lewis and Brian Urlacher, two classic middle linebackers, both got the nod. Tight ends rarely make the Hall of Fame; it’s hard to imagine two going in together.

So who had the better career, Gates or Witten? Their numbers:

Receiving-wise, Witten’s stats are steadier (plenty more catches, slightly more yards) but Gates’ are more explosive (many more touchdowns). The disparity in touchdowns probably pushes the advantage to Gates. But, as run-blockers, while both improved drastically over their careers, Witten ultimately was better.

While on paper, Gates’ and Witten’s resumes are a wash, on film, these two couldn’t be more different. Gates was a revolutionary tight end. He took the “converted basketball player” format that Tony Gonzalez brought and expanded it into a full-fledged prototype. His dynamic receiving prowess changed the way people evaluated the position. Witten, on the other hand, fulfilled the existing tight end prototype. He wasn’t fast or quick, but he was strong and fundamentally sound. He’s as classic of a tight end as the game has ever seen. So what a voter must decide is: Which is more valuable, the man who changed the demands of his position, or the man who met its existing demands to near perfection? The answer is a matter of philosophical preference.

Selfishly, here’s hoping Gates does not rejoin the Chargers. I want to have this debate in full come 2023.

On this week’s MMQB podcast, Gary Gramling and I discussed the NFL’s top 10 tight ends. In preparing for that show, we discovered that the tight end position is in a somewhat depressed state right now. Taking out the injured Henry and the recently retired Jason Witten created two new open spots in our top-10 rankings. Those were filled by second-year pros Evan Engram and O.J. Howard, both works in progress. Spots 3-8 consisted of what amounts to dynamic role player tight ends—guys like Zach Ertz and Delanie Walker. You’ll gameplan with them heavily in mind, but your offense doesn’t really run through them.

Topping the rankings was still Rob Gronkowski at No. 1 and Travis Kelce No. 2. I’m fine with that order, though I’d also be fine with its reversal. We know Gronk is both a dominant receiver and blocker. What many don’t realize is that Kelce is, too. He’s a more versatile and explosive all-around receiver than Gronk, and when he wants, he can make plays in the ground game as an on-the-move blocker in space. Plus, he has improved as an in-line blocker.

Blocking ability separates tight ends—not so much in terms of their ceilings, but in terms of their floor. A few tight ends are difference-making blockers, but most are average. That’s enough to represent quality. Because tight ends face defensive ends on most run plays, a quality blocking tight end is one who simply doesn’t get dismantled. Offenses know there’s a mismatch to work around… it’s just a matter of degree.

Eric Ebron is a great example of the tight end conundrum. In Detroit he became an explosive receiver, thanks largely to improved route running from the slot and out wide. But he was such a bad blocker that the Lions couldn’t always run the ball with him on the field. Defenses noticed this and so Detroit’s passing game became predictable. To overcome this, the Lions had to put Ebron on the bench. That diminishment in snaps made him unworthy of the $8.25 million that his fifth-year option brought in 2018. So, Ebron, a talented receiving tight end, was released. He soon signed with the Colts for $13 million over two years.

It will be fascinating to see how Ebron is used in Indy. The Colts already have one outstanding blocking tight end in Jack Doyle. But Doyle is an on-the-move blocker, molded more like and H-back than a third offensive tackle. Which means Ebron, if he’s to give Indy the flexible, disguisable two-tight end packages they desire, will once again be called upon to block defensive ends. Can he get better—like, say, Greg Olsen, a finesse player in Chicago who has willed himself to become a decent blocker in Carolina? Or, will Ebron simply continue to be a liability? This is the conversation almost every team has about its tight end in today’s NFL.

In and of itself, this isn’t a huge deal. Yes, OTAs are vital, but mostly for the purpose of installing your scheme’s foundation. Brady and Gronk not only have that down, but they’ve played long enough to learn new wrinkles with little trouble. Their absence just means more reps for other guys, which isn’t the worst thing. The rub is their absence also means a newfound legitimacy—and verisimilitude—for the Seth Wickersham piece that so many in New England tried to downplay last year. Indeed, there does appear to be consternation between Brady and Bill Belichick. The Patriot Way has never looked so damaged.

Every NFL player recovering from major injury has formally declared to be ahead of schedule. This year’s rate of 100% of guys ahead of schedule matches the record rate of last year and every year before that.

As predictable as these offseason injury reports tend to be, some guys are so dynamic that sheer excitement ensues when their names come up. Two whom we’ve heard about recently: Deshaun Watson and Dalvin Cook. Watson, who has taken 7-on-7 practice reps for the Texans, redefines not just his team’s offense, but the way some teams view offense in general. Bill O’Brien and his staff did a tremendous job capitalizing on their QB’s mobility. Cook’s speed gives the Vikings, already a Super Bowl contender, an explosive rushing attack to pair with Kirk Cousins. More specifically, it’s an explosive outside zone rushing attack, which propagates the play-action where Cousins thrives.

The move, which saved $6 million in cap space, was not totally expected, but also not surprising. Still, it’s unusual for a soon-to-be 28-year-old three-down linebacker to be available entering June. Kendricks isn’t always the most disciplined player (which is partly why the Eagles thought he was actually more of a two-down linebacker), but he has the physical tools to prosper in almost any run-and-chase scheme.

• THE SECRETS OF A LINEBACKER: The alignment of a tight end’s feet, the depth of a running back, a little extra space between the center and a guard. Saints linebacker Craig Robertson shares what he looks for when examining an offense before the snap.

Non-football Thing on my Mind

The worst thing on television is a breakaway dunk in an NBA game, for one simple reason: broadcast directors, inexplicably, think fans want to see a low, behind-the-basket angle for a dunk. Almost always, they jump from the familiar high mid-court camera to one along the baseline. They probably think this is cutting-edge artistry. It is, if artistry means an ugly distortion of the viewer’s angle and depth perception. Baseline cameras don’t capture how high a player jumps (everything simply looks “above the rim”) and it misses on much of the ball-handling nuance. Breakaway dunks are one of the most exciting plays in sports. But their frustrating televised distortion (along with the Warriors being so artificially loaded since adding Kevin Durant that their failure to win a championship would be not a disappointment, but an embarrassment) is why I won’t tune into the NBA Finals this year.