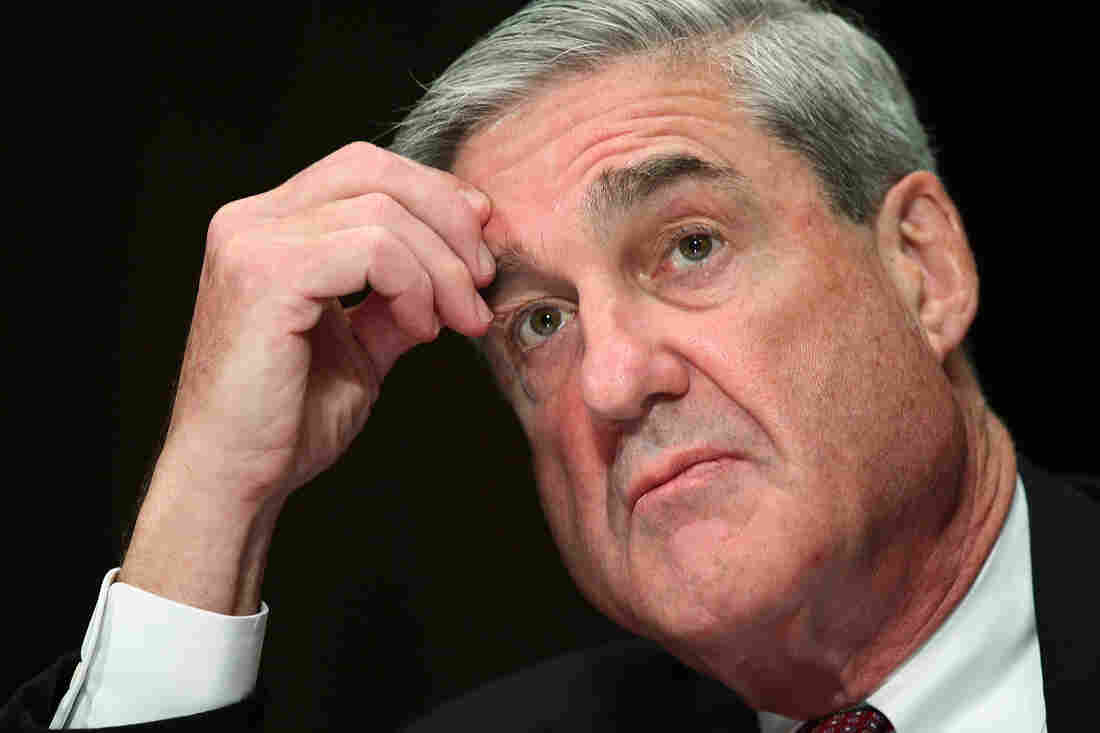 Then-FBI Director Robert Mueller testifies during a hearing before the Senate Judiciary Committee focusing on the oversight of the FBI in July 2010 on Capitol Hill. Alex Wong/Getty Images hide caption 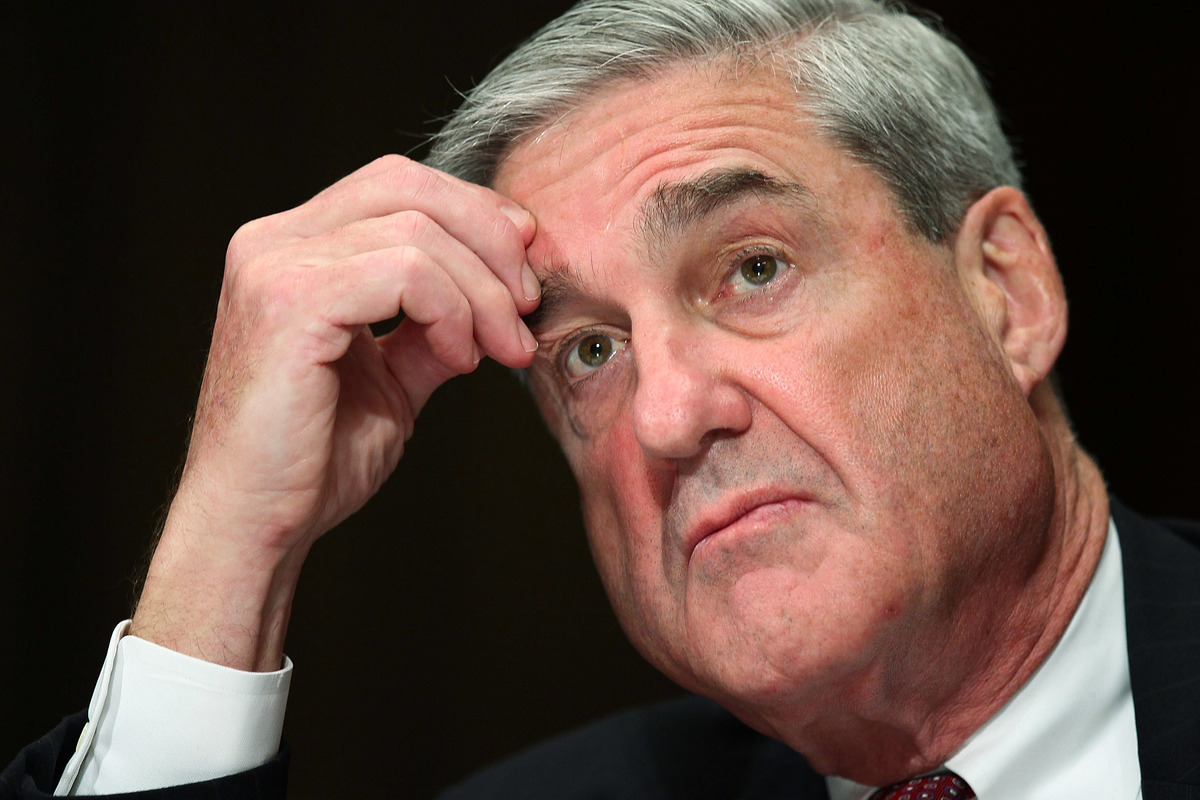 Then-FBI Director Robert Mueller testifies during a hearing before the Senate Judiciary Committee focusing on the oversight of the FBI in July 2010 on Capitol Hill.

This week in the Russia investigations: After a lot of Sturm und Drang, the door appears to be closing on an interview between President Trump and Justice Department special counsel Robert Mueller.

At the conclusion of another outrageous dust devil week of news, here is the main thing to take away: An interview between President Trump and the team of Justice Department special counsel Robert Mueller now appears less likely than ever.

The road to reach this point was wild — it involved a war of leaks and counter-leaks in the press, an explosive media tour by one of Trump’s new lawyers, former New York Mayor Rudy Giuliani, and then a bravura quasi-reverse double salchow by Trump himself on Friday.

The upshot of it all is that Trump and his attorneys appear to have concluded the week in stronger alignment: the risks are too great for the president to sit down with Mueller or his investigators.

They’re hopelessly biased and running a “pure witch hunt,” as Trump said. If he could only be assured they would be fair, he told reporters, he’d be glad to cooperate — but who could ever make such an assurance? Besides, Trump’s attorneys and his outside advisers have been counseling him for months not to talk with Mueller.

Giuliani began this week as the biggest apparent advocate for an interview inside the Trump camp. Then The New York Times printed the list of nearly 50 topic areas that Mueller’s team has told Trump’s lawyers it wants to address.

The command of detail and breadth of knowledge required by Trump would necessitate days’ worth of meetings. Trump is not known for being a crisp, precise speaker, observers have noted. Any misstep that could open him up to charges of having lied to investigators makes the interview dangerous, at least politically if not legally.

In their public comments, Giuliani and Trump have tried to keep open the idea that they’d cooperate with what they consider a reasonable request — two to three hours tops, as Giuliani said. They probably know the special counsel’s office wouldn’t agree.

If that is so, and Trump still doesn’t budge, it raises the question about what action he and his attorneys will take, of which more below.

For now, if this remains the president’s position, it could have one of two consequences: it could either speed up the Russia imbroglio and bring forward milestones that might not have transpired for several more months … or, it could do the exact opposite and extend this saga by a year or more.

No one but Mueller and his team truly knows what they know and what they intend in this affair. If, as has been surmised, Mueller’s investigation is mostly complete and Trump is the last interview that Mueller wants — and it becomes clear he won’t get it — the special counsel’s office could simply bring its work to a close.

If, as has been surmised, Mueller does not or never intended to try to indict Trump, because he doesn’t believe the Justice Department has that power, Mueller’s team then could file its report about alleged collusion or alleged obstruction, or both, or neither, and make clear that it couldn’t address the questions that only Trump could answer.

The galaxy of questions that Mueller’s office formulated for Trump suggests how central the president’s evidence remains to whatever the special counsel is building.

That may mean that if Trump won’t play nice, Mueller might play hardball.

The special counsel could obtain a subpoena that would compel Trump to give evidence or appear before a grand jury. And Trump could ask a judge in the case to quash it.

That might require a battle in court that could stretch for months or more, winding up ultimately in the Supreme Court. Legal experts argue that, ultimately, the White House would probably lose, but it might take a long time to get there.

(And then what would happen? Would U.S. marshals knock down the door to the White House and drag Trump down to federal court? Even the end of the case wouldn’t be the end of the story.)

Or Trump could invoke his Fifth Amendment right not to give evidence that would require he incriminate himself. He enjoys that privilege under the Constitution. That might take us back up to the fast way, above, if it ended the matter — but it would also represent a political gamble by the president and his advisers.

Although Trump has opined that people who take the Fifth look like they’re guilty, Trump also has seldom felt bound by his past comments. Plus he and his allies have spent months scourging Mueller, the FBI and the Justice Department. Their reputations have taken a major hit.

So among the political supporters that Trump cares about, not cooperating with Mueller isn’t just logical, it’s imperative — Mueller, Justice and the feds, viewed through this prism, are grand inquisitors run amok on a scurrilous witch hunt.

That’s also why Trump has held open the possibility of using his own power to take some action against the Justice Department, either by dismissing Deputy Attorney General Rod Rosenstein or Mueller or some other way.

That strategy also would involve political risk and based on the time, temperature and barometric pressure in Washington, D.C., it might be a bridge too far.

Or, direct action by the president might make political sense depending on how strongly he and his advisers felt about the way they’ve shaped the political landscape.

Trump’s most loyal supporters stay with him no matter what. They and many Republicans in Congress say the FBI and the Justice Department are warrens of treachery that have been conspiring for years to frame the president. Resistance is the only thing that makes sense.

Trump then confirmed the payments the following day on Twitter, while denying Daniels’ underlying claim about a sexual encounter with him.

In this case, these are the actions of a chief executive and an administration profoundly confident about retaining their core political support. As long as that persists, look for Trump and the White House to fight Mueller, not accommodate him.