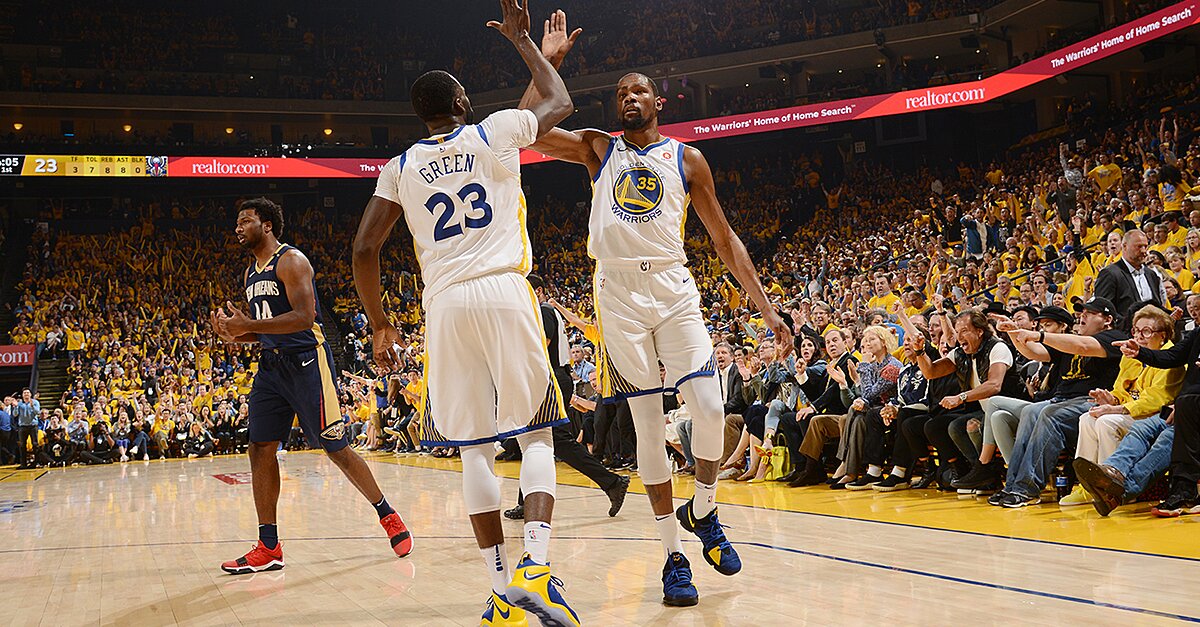 Through injuries, self-sabotage and a first-round series camouflaged by a slow-down pace, Golden State spent most of the past six months in hibernation. This was, surely, the most-talented and least urgent 58-win team in NBA history, a juggernaut in disguise that regularly looked bored when playing at full strength and often seemed lost without Stephen Curry.

The Warriors reintroduced themselves Saturday, destroying the Pelicans 123-101 in Game 1 of the Western Conference semifinals. They did it without Curry, who remained sidelined with a knee injury, and they didn’t even need Kevin Durant and Draymond Green to play in the fourth quarter after posting 76 points before halftime. While the Warriors controlled and dissected the Spurs in the first round, they never quite captured the invincibility that has defined their peak moments over the past four years. That sensation returned in Game 1, particularly during a 25-2 second-quarter run, flattening the Pelicans immediately after their first-round sweep of the Blazers.

“That was probably the loudest I’ve heard Oracle all year,” Warriors coach Steve Kerr said. “It was kind of a weird regular season. But the playoffs are here and our guys feel that. Our fans feel that. That second quarter reflected what’s at stake and what we’re trying to accomplish.”

The Warriors’ 123 points marked their highest total since mid-March and their 22-point margin of victory was their greatest since late-February. Kerr rekindled his team’s explosive identity by meeting fire with fire, downsizing his starting lineup by playing Green at center to match up with the Pelicans, who have thrived since the All-Star break by playing small lineups around Anthony Davis. Golden State also started guards Andre Iguodala and Nick Young with Durant and Klay Thompson, producing a five-man group that could switch everything and deploy size and length on New Orleans’ guards, who had played extremely well against Portland.

The results were devastating and demoralizing. Green posted a triple double (16 points, 15 rebounds, 11 assists) in 30 minutes. Durant had 26 points and 13 rebounds in less than three quarters. Meanwhile, Davis, who got whatever he wanted whenever he wanted against the Blazers, was held to 21 points on 20 shots. Jrue Holiday, who had his way with Portland’s undersized backcourt, struggled to contend with Durant’s length. And the Pelicans lost the track meet, conceding 20 points off turnovers.

“What they did in the second quarter was an embarrassment to us,” Davis said. “We’re not that type of team.”

The fundamental problem for New Orleans, though, is that Golden State and New Orleans are the same type of team, only the Warriors are deeper, longer, more versatile and more experienced. They are better shooters and more focused defensively too.

“That didn’t go as planned,” Pelicans coach Alvin Gentry deadpanned. “Everyone they stick out there is 6’7, 6’8’’ or bigger. This is not anything new to the league, really. [The Warriors] done it before. You have to be very disciplined with what you do against these guys in all aspects.”

The Pelicans have found success over the last three months pushing the pace, showcasing Davis’s versatility, and getting major contributions from their starting backcourt. Unfortunately, Golden State has strong counters on all fronts. The Warriors have played fast for Kerr’s entire tenure, they have smart and strong interior defenders to use on Davis and their deep wing rotation has succeeded in limiting MVP-caliber players like LeBron James and James Harden in the postseason. As great as Holiday was in the first round, he’s hardly the toughest test the Warriors have faced.

As if Golden State’s thorough dominance wasn’t bad enough, New Orleans must contend with the fact that Game 1 had perhaps the most favorable circumstances of the series. Curry didn’t play, after all, and the Pelicans had enjoyed extra rest and preparation after sweeping the Blazers. But Gentry felt the Pelicans “lost our rhythm” during the time off, and now Curry may return for Game 2 on Tuesday.

Through their first two weeks, these playoffs have felt anything but preordained. The Sixers, Jazz and Pelicans all represent new blood, James Harden and the Rockets played some breathtaking stretches against the Timberwolves, and the Cavaliers have lagged badly against the Pacers.

But this much is certain: Nobody is beating this version of the Warriors—the one that finally showed up with every switch flipped Saturday—four times out of seven. Throw a healthy Curry back into the mix, and the task of unseating the champs goes from tall to colossal.