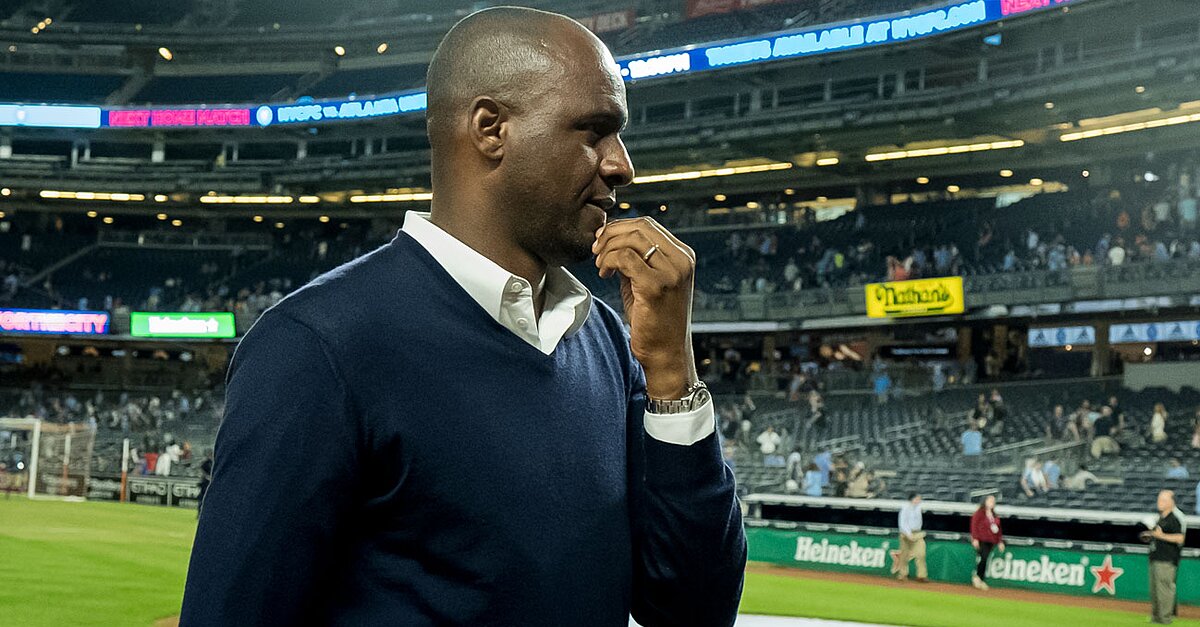 World Cup time means significant absence time for a number of Major League Soccer teams, like it usually does. Even with the USA not taking part in Russia 2018, the league is slated to lose 19 players–and it could be 20 if Laurent Ciman is tabbed to replace Vincent Kompany for Belgium–for at least a couple of weeks. The biggest departure, though, is taking place on the sidelines, and it’s a permanent one.

Patrick Vieira is leaving New York City FC for OGC Nice in France, a development that overshadows everything that took place on the field during Week 15. That includes a ridiculous comeback swing in San Jose; two more goals for Zlatan Ibrahimovic; the awaited return to the win column for both reigning MLS Cup finalists; the extension of lengthy losing streaks in Colorado and Orlando; the extension of a winning streak for an impressive FC Dallas; and a three-assist masterclass from one of the league’s rising stars.

But our weekly look back at the talking points in MLS all starts with Vieira’s exit, and the massive loss it is for one of the league’s title contenders after the 15th week of the MLS season:

Let’s hope, for NYCFC’s sake, that the hiring of Vieira’s successor goes more smoothly than the announcement of his exit. For starters, it was first unveiled on the website of Manchester City–the favorite and most spoiled child of the City Football Group family–Sunday night before ultimately being unpublished. It doesn’t matter who the controlling organization of the club is. What kind of a message does that send when NYCFC can’t even unveil its own news? (The club eventually did have its say, Monday morning.)

The logistics of everything aside, the timing of Vieira’s departure is far from ideal for NYCFC. From a personal standpoint, you can see why he’d do it for his coaching career. He goes back to a country he knows quite well, and he places himself firmly back on the European coaching radar (and readies himself for Unai Emery’s eventual capitulation that re-opens the door at Arsenal, right?). Leaving CFG couldn’t have been an easy call, but with Pep Guardiola extending his contract and growth within the organization’s clubs not really a possibility, Vieira has decided to work his way up elsewhere.

There had been smoke for this fire for some time, but despite Vieira’s best attempts to play down and dispute the talk, the finality appears to be here. For an MLS Cup and Supporters’ Shield contender like NYCFC, there’s no other midseason loss that could be as crippling. Certain players carry plenty of value for the club, but it’s not nearly as reliant on one–David Villa–as it used to be, and everything that happens on the field is set from the top.

“[Vieira] changed the mentality of the team the day he arrived in New York,” Villa told SI.com earlier this season.

The club has surely had ample time to prepare for this, and the development won’t come internally as a total shock. But for whoever takes over–and one would assume it would come from within City Football Group–there’s a transition period to be had. MLS is not your average landscape, and while Vieira navigated it rather seamlessly, it doesn’t mean another coach with no previous league exposure will, too. It’ll be fascinating to see what comes of NYCFC’s season after such a jarring change.

II. The worst way to seemingly blow a game

LAFC looked poised for a point on the road against the San Jose Earthquakes after this shaky backpass by Dejan Jakovic and even worse misplay by goalkeeper Tyler Miller, who gifted Chris Wondolowski a vacant net and the ball for his second goal of the game. At the time, it gave San Jose a 3-2 lead to defend for the final 27+ minutes and put LAFC in position to lose for a third time in four games entering a two-week idle period. Just brutal…

III. The worst way to really blow a game

…Yet not as brutal as the way in which the script was flipped on San Jose! Conceding two goals from the 90th minute on, including one seven minutes into stoppage time, is just a gutwrenching way to drop points, especially for a team that needs every one it can get.

Between this and being on the wrong end of Ibrahimovic’s debut, LAFC sure has made a habit of getting involved in some high-scoring thrillers in its inaugural season. And speaking of the Galaxy star…

IV. Zlatan at the double

Zlatan won’t be among the MLS contingent playing at the World Cup, but the lion was back in the LA Galaxy’s lineup, and he roared quite loudly to the tune of two goals in a 3-0 win over Real Salt Lake Saturday night.

The second of Zlatan’s goals is the only of his seven all season that have been scored with the Galaxy in a leading position. The other six have come with the team either trailing or tied. If nothing else, it just goes to show what a rough ride it’s been for the club–and how necessary a night like Saturday really was.

Referee Ted Unkel failed to brandish the red card in what appeared to be the denial of an obvious goalscoring opportunity with no other defenders back (VAR had a chance to have its say, too, and didn’t), much to the disapproval of the visiting team.

Imagine the fine that’d be coming a coach, GM or owner’s way had they reacted the same way to a referee.

Nicolas Lodeiro was not included on Uruguay’s final 23-man roster for the World Cup, something that Luis Suarez did not take well.

Lodeiro, however, responded positively on the field, and while it’s not nearly apples-to-apples with Landon Donovan’s USA exclusion four years ago, it also wasn’t too dissimilar. And as Donovan scored in his first match back on the field after the snub, so, too, did Lodeiro, in helping the Seattle Sounders snap a three-game losing streak in which they’d been shut out in each contest.

Orlando City continues to do the unimaginable–following up a six-game winning streak with what is now a five-game losing streak. The 5-2 loss to the Vancouver Whitecaps was the latest setback for team that’s been leaking goals, conceding multiple tallies in each of the five losses, 14 in total.

If there’s a silver lining for Orlando City, it’s the schedule: Two straight matches against the Montreal Impact. If the Lions are still streaking in a downward direction after that, the calls for Jason Kreis’s job are going to get louder.

What’s worse than Orlando City? The Colorado Rapids, of course. Another humbling loss, this one a 2-0 defeat to the Houston Dynamo, makes for eight straight Ls. It’s like Antoine Griezmann is dedicating that Fortnite dance solely to them.

The fact that it came on the heels of a U.S. Open Cup round-of-32 loss to USL’s Nashville SC (coached by ex-Rapids boss and 2010 MLS Cup winner Gary Smith), in which Colorado didn’t have a single shot on goal, only makes matters worse. Anthony Hudson was seen as an intriguing coaching hire upon his arrival, but it really, really has not panned out.

The club might show more patience with Hudson than its fans have, but the fact of the matter is a loss to Chicago on Wednesday would inch the club even closer to the 1999 New York/New Jersey MetroStars league-record 12-game losing skid.

We told you earlier this season that 17-year-old Vancouver Whitecaps standout Alphonso Davies wouldn’t be long for MLS, and when you see games like Saturday’s vs. Orlando City, you see why.

His one-goal, three-assist masterclass sparked the Whitecaps in the 5-2 triumph and displayed all the reasons why he’ll continue to be a sought-after target. His burst, his speed, his ability to take defenders on and run the length of the field, his vision and his touch are all sensational. Enjoy him while you can, Vancouver.

Quietly, Teal Bunbury has put together a career season in just over three months’ time.

Bunbury has matched his single-season career high in goals with nine, and he’s now riding a four-game scoring streak. This latest one came off a gift from the Chicago Fire’s Richard Sanchez, who … we’re not quite sure really what the thinking was here. But good on the Revs for seeing the play through to the end and capitalizing on the opportunity.

If nothing else, his form gives reason to call back a time seven years ago, when he was a prospect on the rise, a genuine option for the U.S. national team and a viral sensation after his first international goal thanks to Univision’s tremendous celebration call. His career hasn’t quite panned out like that day would have indicated, but it’s never too late for a resurgence.

Immediately after the U.S. men’s national team played France to a 1-1 draw, it was easy to see how a number of players who figured prominently in that friendly would have impacted the MLS fixture that immediately followed. With no Zack Steffen or Wil Trapp available for the Columbus Crew, and no Tim Parker or Tyler Adams available for the New York Red Bulls, the battle of Eastern Conference contenders was certainly missing some of its quality.

That much was evident in an outrageous first half, in which the Crew absolutely peppered (outshot 15-2) and battered a Red Bulls side missing a key part of its spine, yet only emerged with Gyasi Zardes’s 10th goal of the season. Alex Muyl’s second-half equalizer salvaged a 1-1 draw, an important result for a Red Bulls side that could be dealing with the loss of Adams to Europe sooner than later.

It’s not only the blue side of New York that has to worry about losing a central figure.